“You can take me out of India, but you can’t take India out of me,” Priyanka Chopra said in her recent interview with Rasha Goel.

“My culture or me being who I am just sort of goes with me in a bubble wherever I’m. So I never feel like I’m away from home at all.”

And with her portrayal of the adult Sati in The Matrix Resurrections, Priyanka is keeping her Indian culture front and center.

In the latest installment of Entertainment Weekly’s Around the Table, Nick Jonas’ wife opened up about the weight of playing the character, saying there was something “sacred” about the role.

“It was really fun, at least in the physicality, even with the hair, to have references to young Sati. Even the clothes, we treated her like a warrior but at the same time had an homage to her Indiana roots.”

“We used colors which were Indian. We had borders of sarees. Little details which were so amazing and so well done by the team that as soon as I put it on, there was something very sacred about who I became,” she added.

First introduced in 2003’s The Matrix Revolutions, Sati is an exile program visualized inside the Matrix as a young Indian girl, who was placed under the care of The Oracle.

Priyanka also explained the freedom and burden in playing the grown-up Sati, which was a key character in the Matrix mythology.

“Playing the same character but the older adult version of her gave me a lot of freedom to be able to create something that was new and not have this burden of playing a character which was developed completely.”

“I think there was a burden and responsibility of living up to the expectation of what and who she would be as an adult but at the same time I didn’t have a responsibility of, ‘Am I going to be like her?’ So it was a lot of creative interpretations that I had, which was really fun and challenging to do,” she explained.

Staying true to her Indian roots, the 39-year-old actress arrived at The Matrix Resurrections San Francisco premiere, wearing colors inspired by her character in the movie.

She paraded her toned legs in a glittery, long dress from Halpern, a London-based fashion designer known for his distinctive sequined designs.

The striking Spring 2018 gown features a strapless design, a flattering form-fitting silhouette, and a daring thigh-high split. Adding a sleek edge to the look was the red fan-like appliqué placed across the bodice. 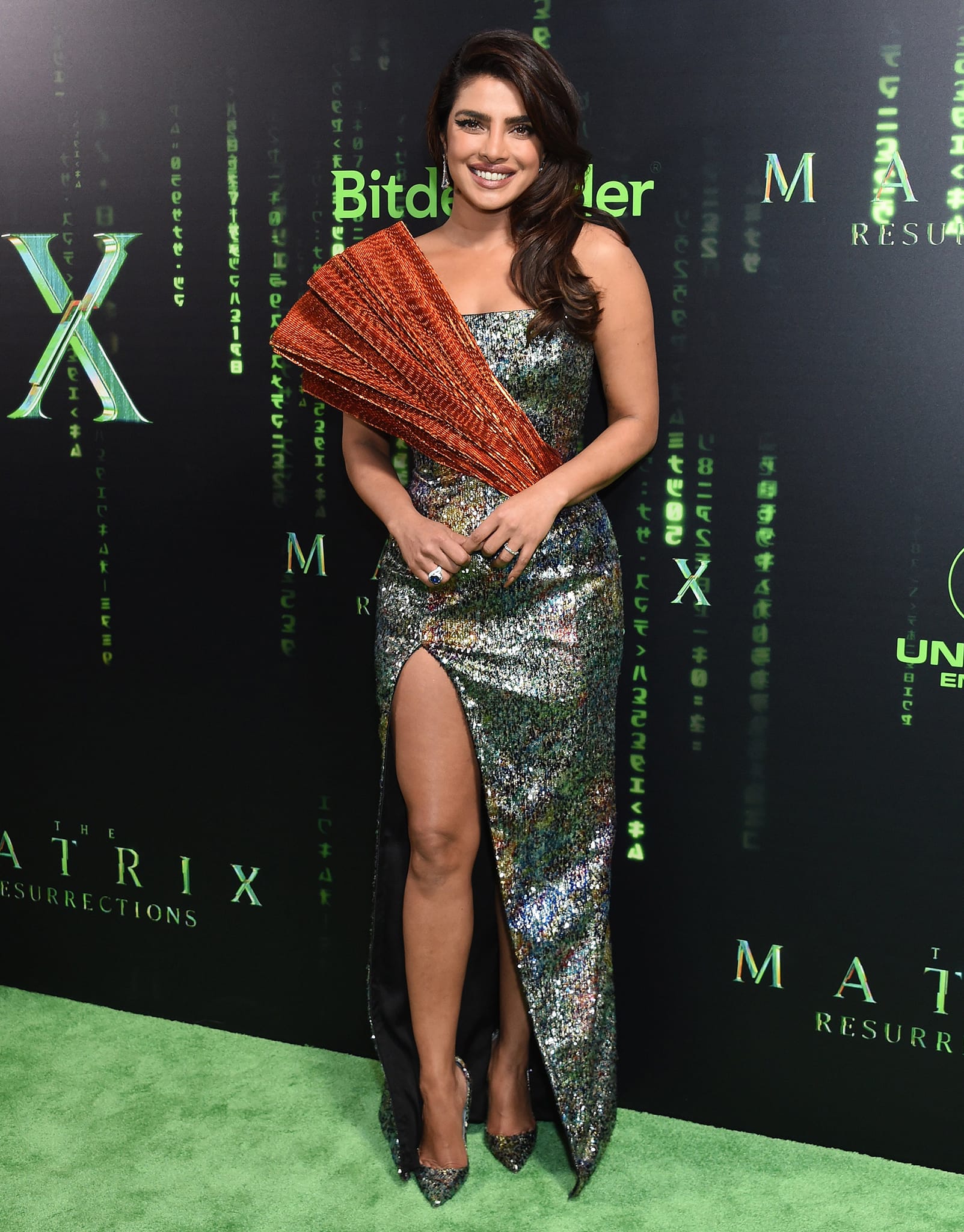 Allowing the dress to speak for itself, the Quantico star accessorized with just a few pieces of Bulgari jewelry, including a pair of Diva’s Dream drop earrings and a matching ring.

She then completed her ensemble with Christian Louboutin metallic pumps that perfectly coordinated her dress. They have sequin accents, pointed toes, and about 4-inch heels. 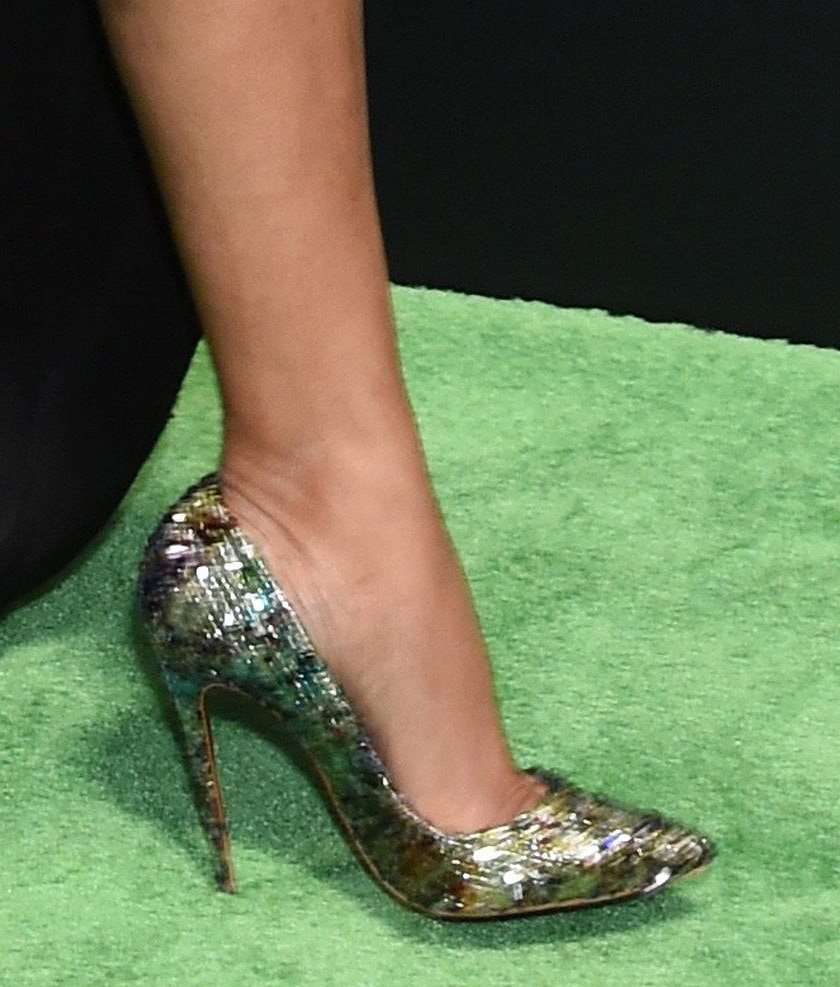 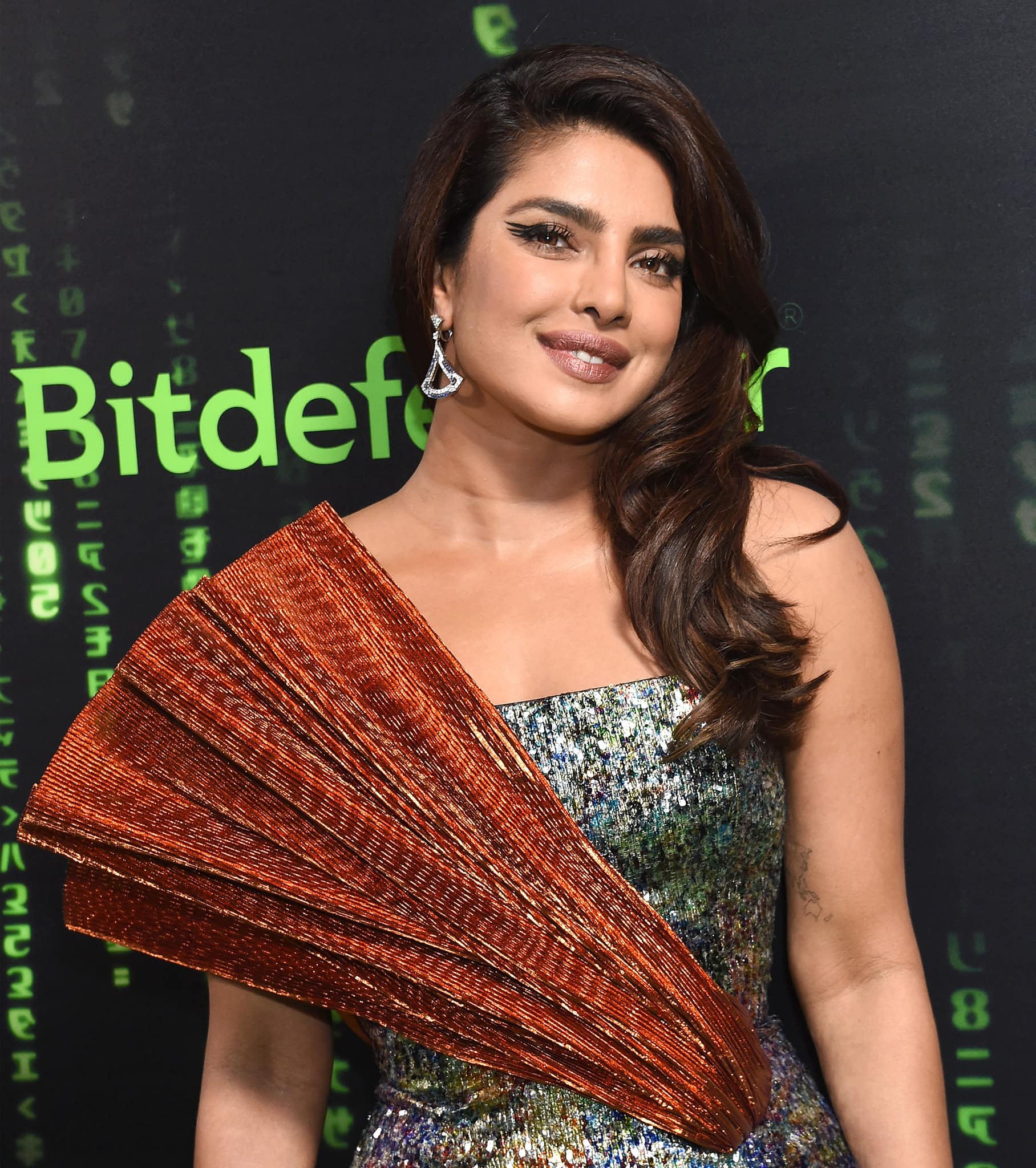 Last week, Priyanka showcased a series of chic ensembles as she made rounds on the talk show circuit to promote her new movie.

Arriving on the Late Night with Seth Meyers, The White Tiger actress showed off her daring side in a see-through black lace ensemble from Dolce & Gabbana’s Spring 2022 collection. 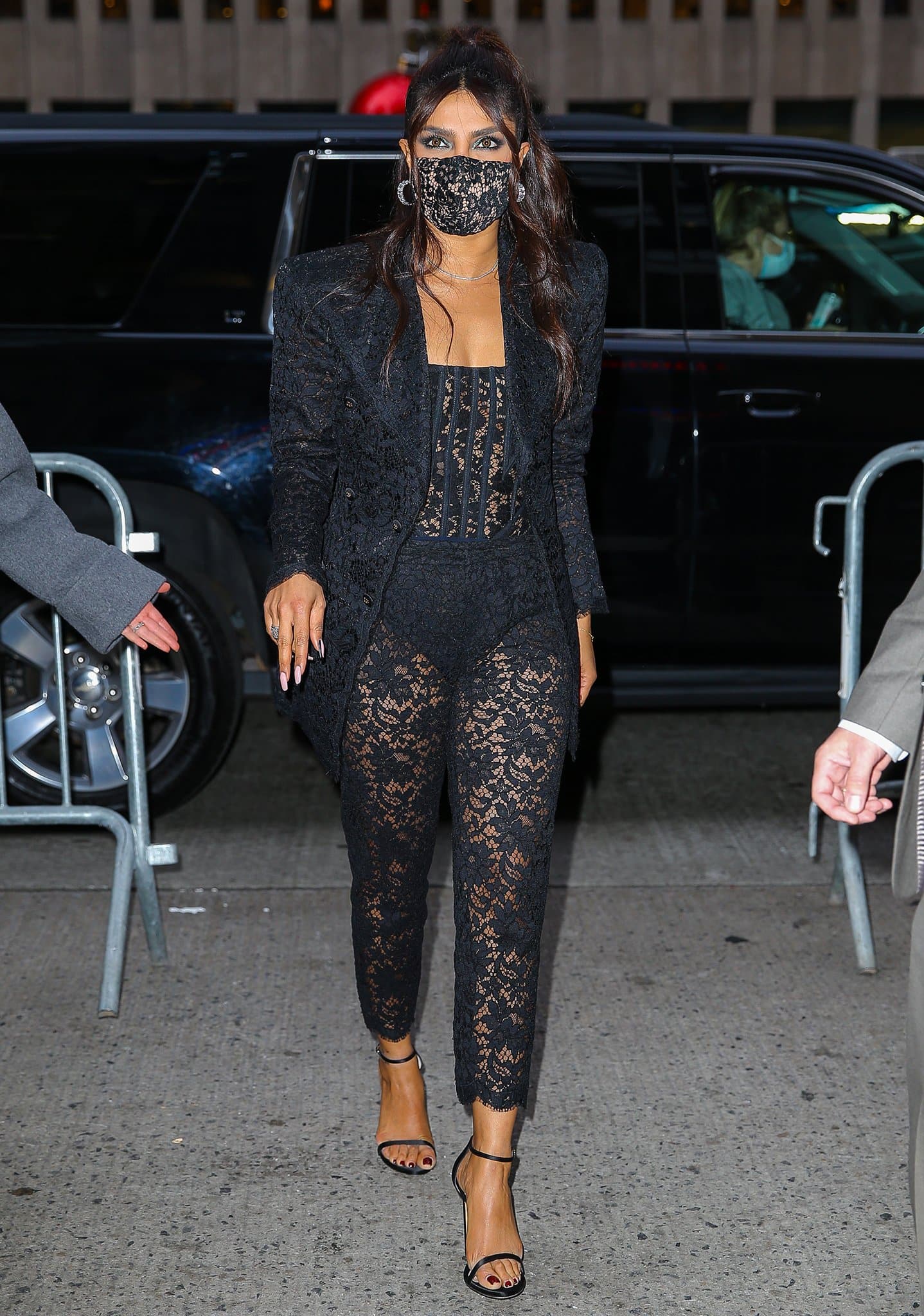 The sheer strapless catsuit features a boned corset-style bodice and pants with a scalloped hem. She teamed the look with a matching floral lace blazer with padded shoulders and revealed her black underwear through the open lacework design.

She continued with the sultry vibe of her look by wearing shimmering blue-green eyeshadow and dark mascara and pulling her tresses into a half-up ponytail with a few face-framing wisps.

Priyanka then wore a matching lace face mask and added a polished finish to her look with the iconic “Nudist” sandals from Stuart Weitzman. 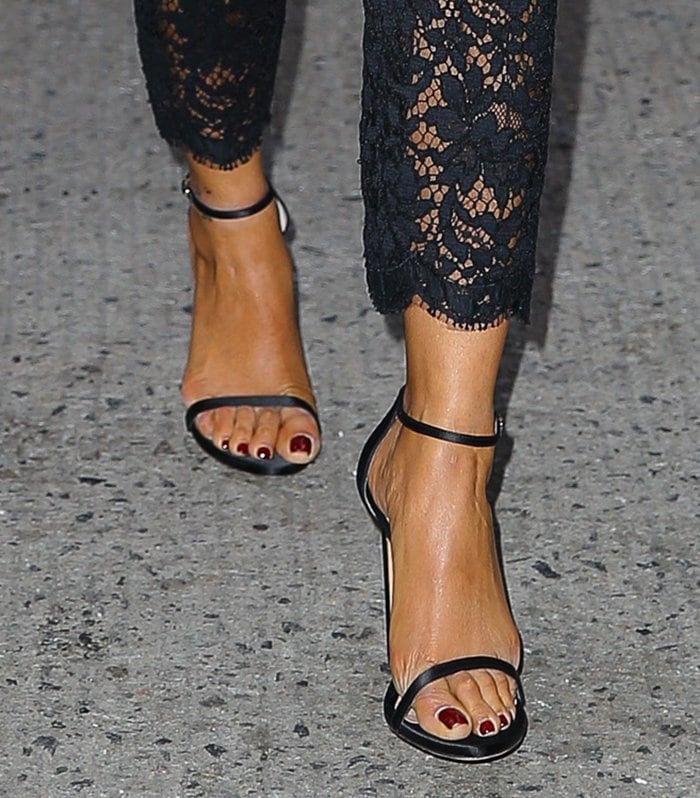 A few hours earlier, the Indian actress was spotted leaving the ABC studios after taping an episode for The View.

She looked red hot in Sergio Hudson Fall 2021 co-ords, which consisted of a belted blazer and matching wide-leg trousers. 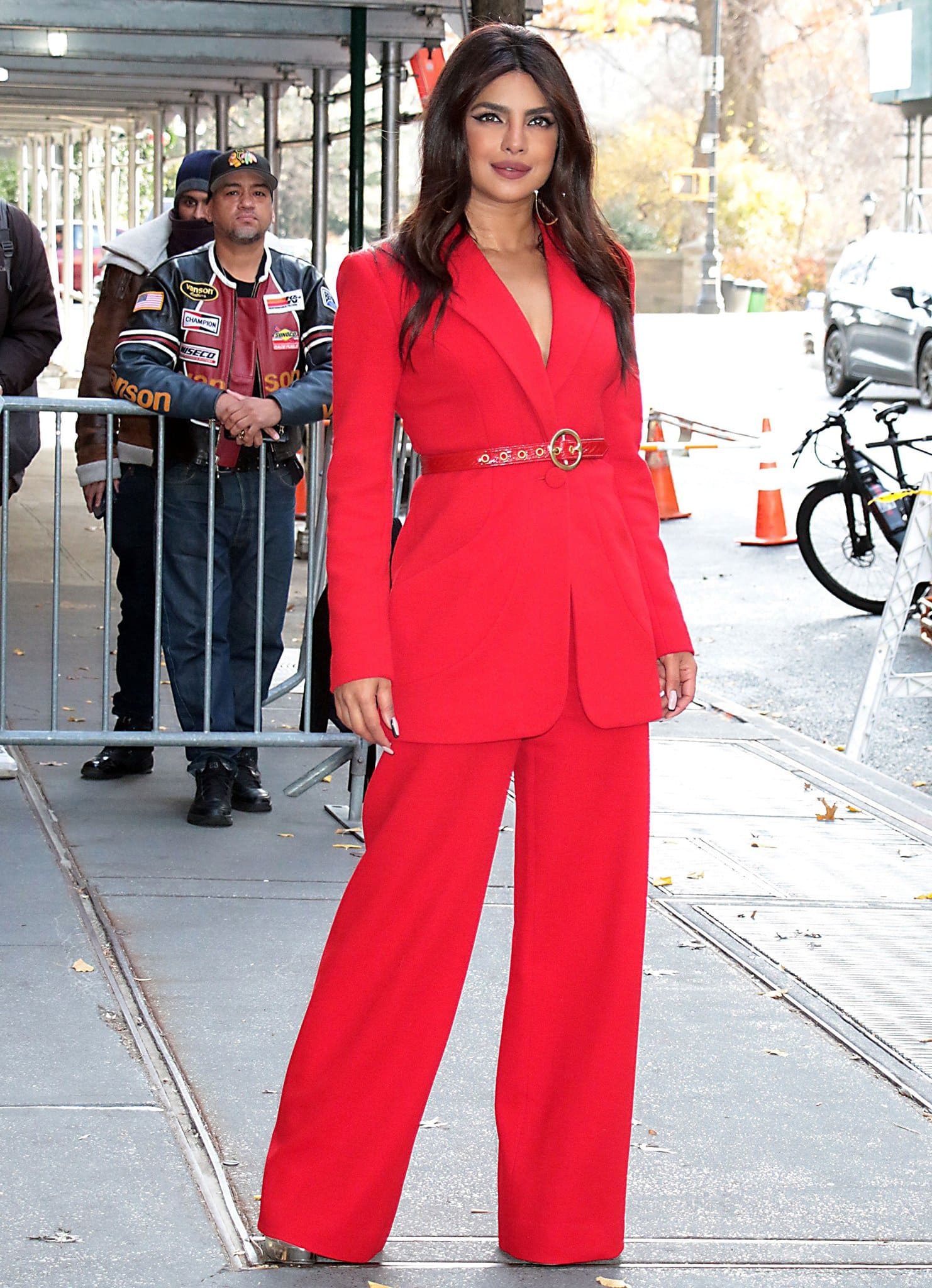 The former Miss World titleholder then let her long hair flow over her shoulders and painted her face with bold winged eyeliner and mauve lip color. 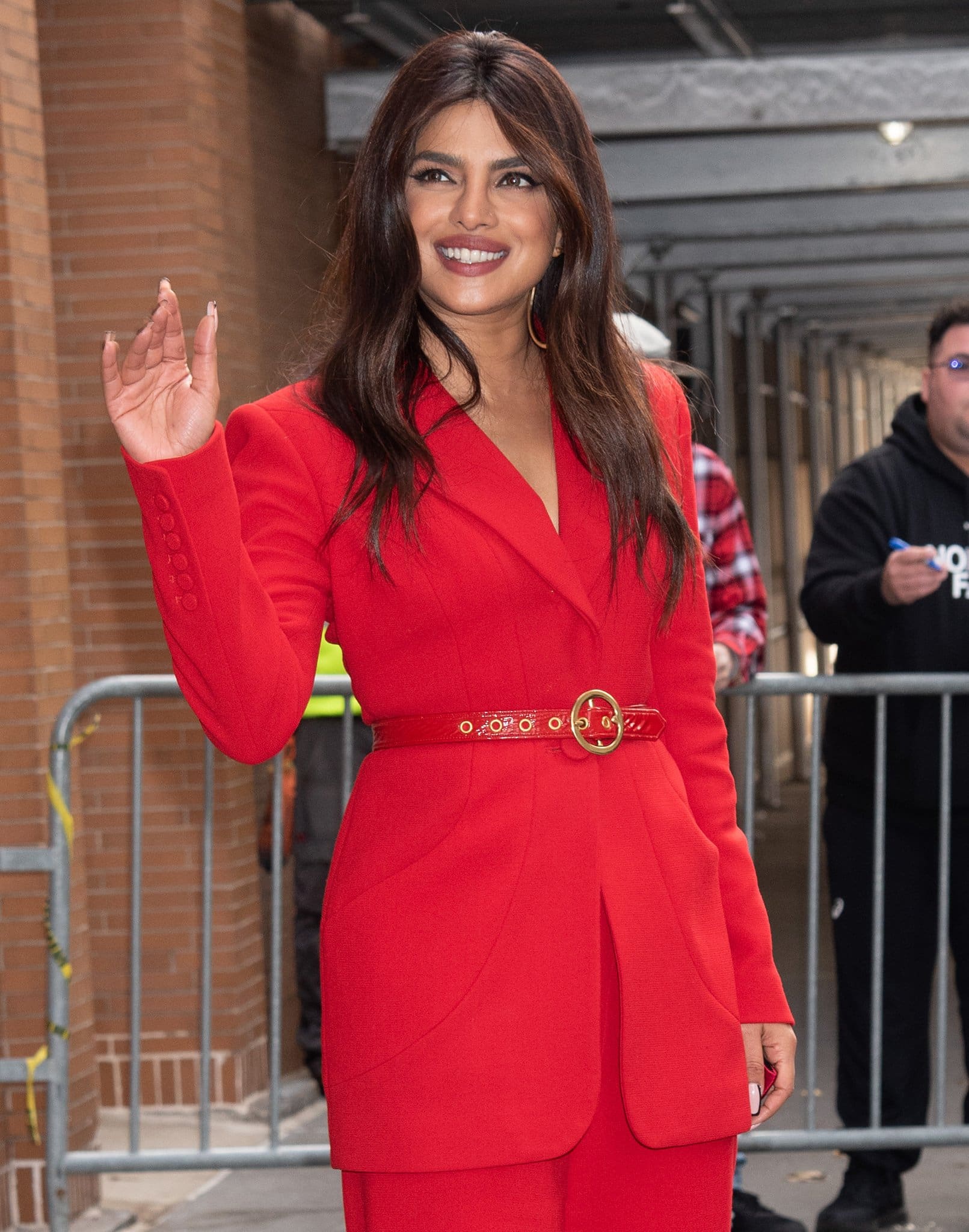 Priyanka Chopra wears her tresses down and glams up with winged eyeliner and mauve lip color (Credit: Mega / WENN)

For her Good Morning America appearance earlier in the day, Priyanka Chopra opted for a festive green and silver two-piece look. 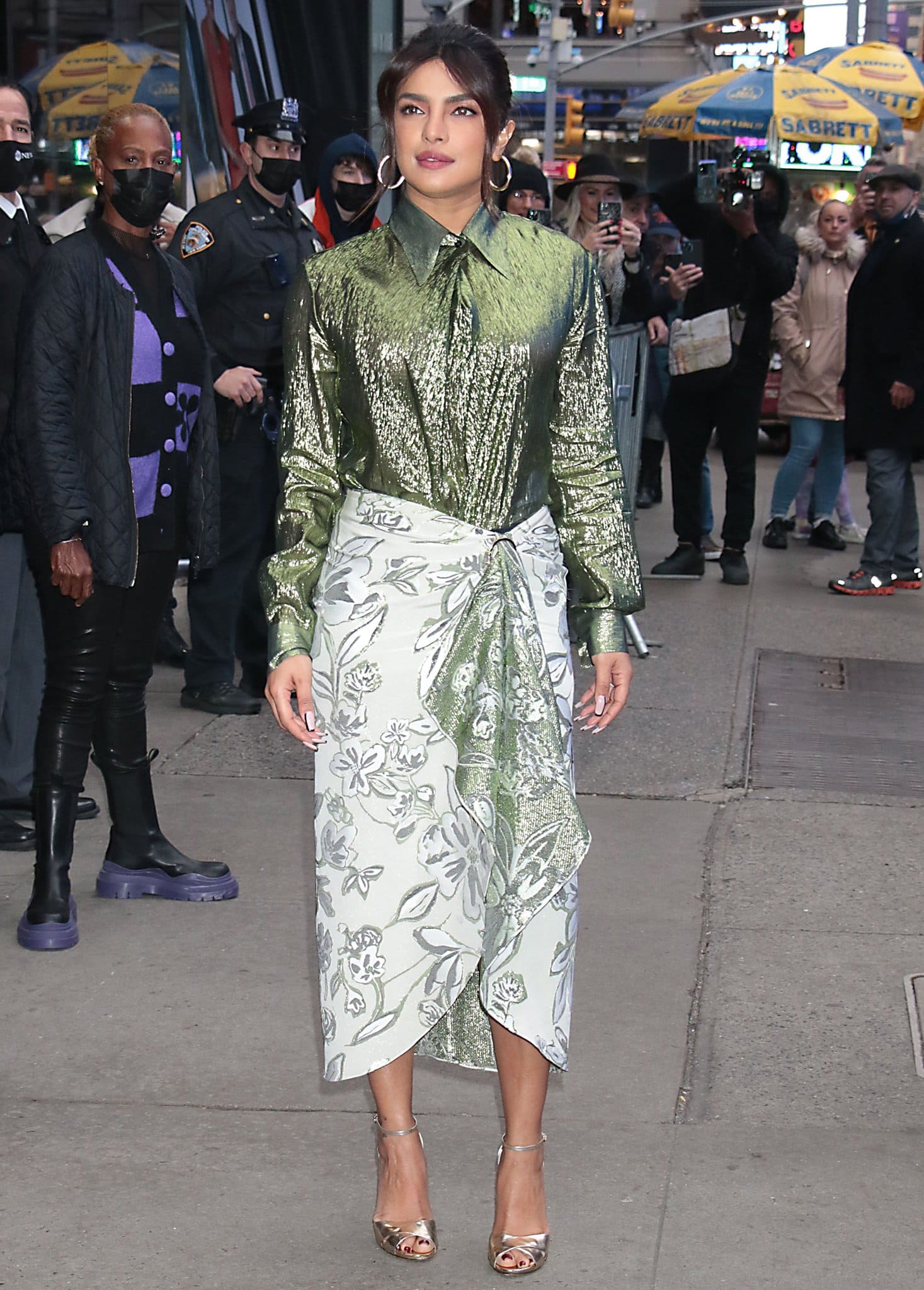 Accessorizing with just a pair of thick gold hoop earrings, Priyanka pulled her tresses back into a loose bun with face-framing tendrils and wore pink eyeshadow with matching lip color. 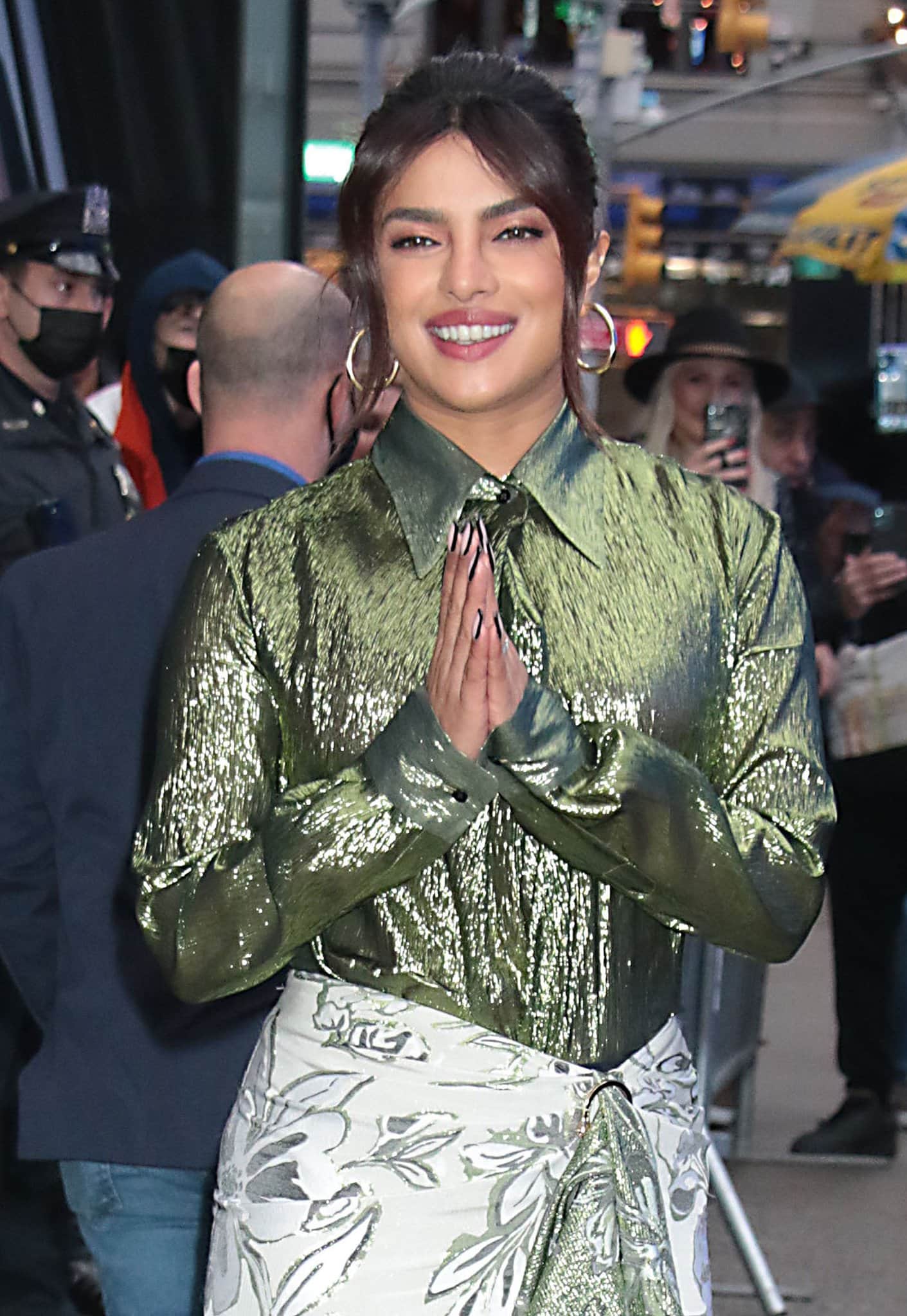 When it came down to her footwear, the actress slipped her feet into a pair of metallic heels that further elevated her 5’6” height. 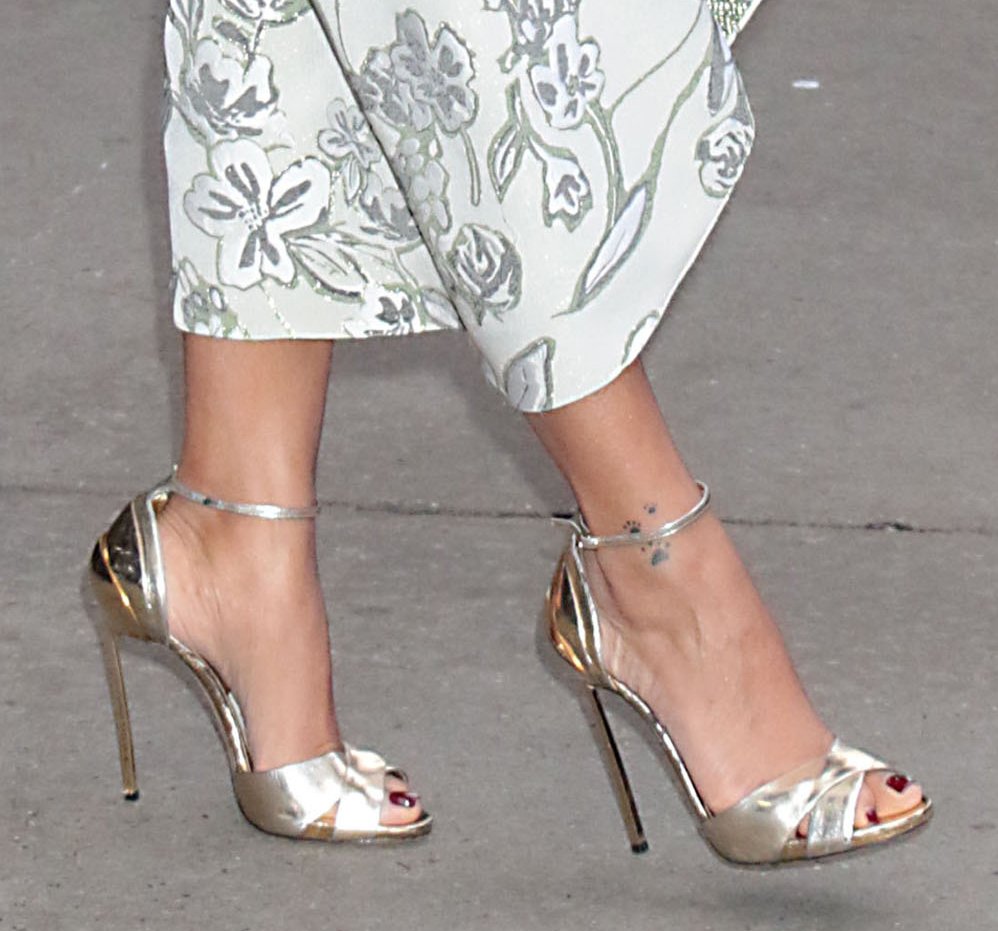