Bella Thorne has recently come under fire for her behavior on, and public statements about, the popular website, OnlyFans.

Bella Thorne joined OnlyFans in August 2020 and made $1 million on her first day and $2 million in her first week on the platform (Credit: OnlyFans)

While she has been in the spotlight since she was a child, only recently has Bella taken more of a dive into the world of adult pictures, film, and content.

Who is Bella Thorne?

She has a diverse ethnic background, with her heritage tracing back to Cubans, Italians, Germans, and the Irish. Bella’s first language is Spanish and she was bullied growing up for her dyslexia. 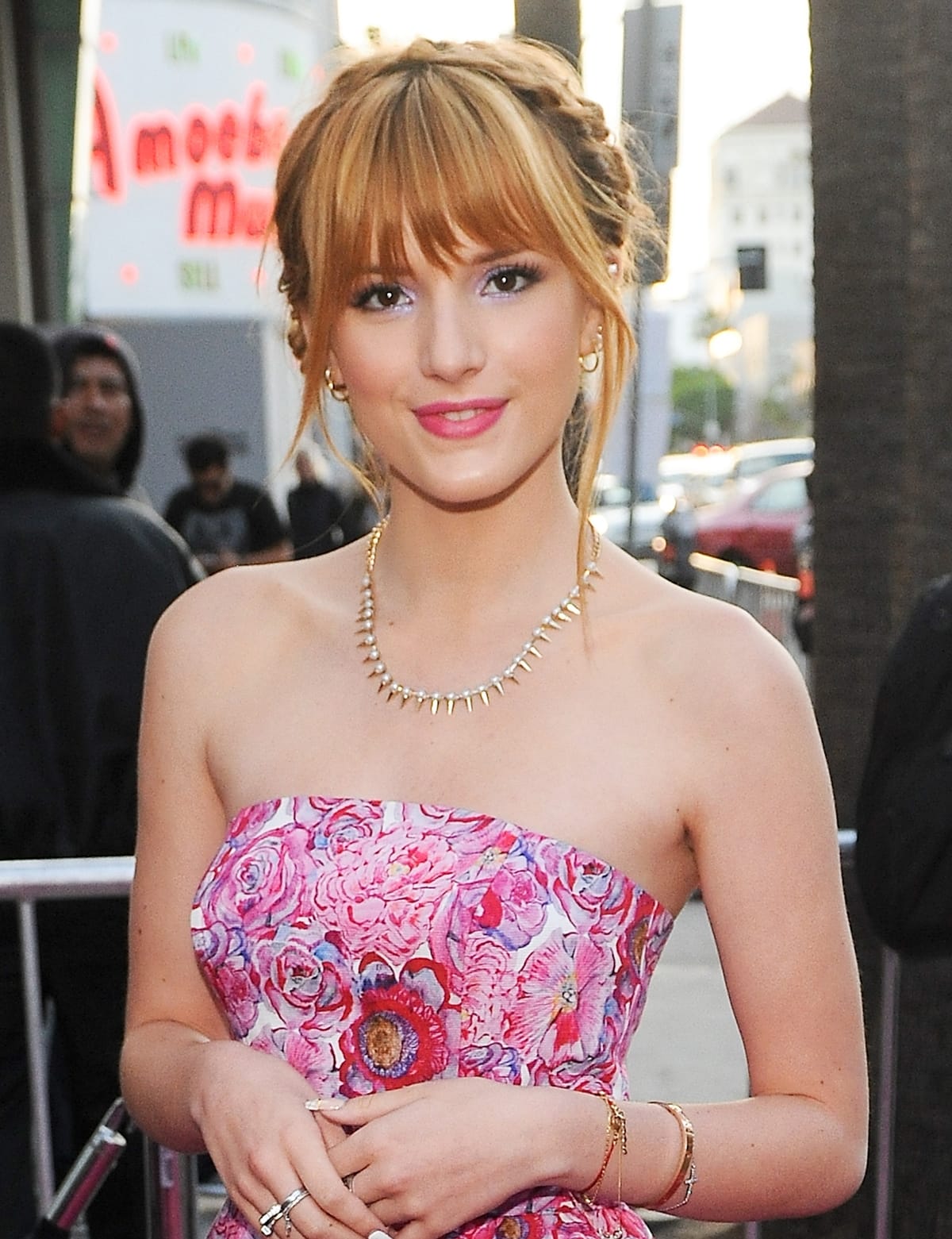 Bella began acting as a child, initially, to help support her very poor family. Her father passed away in a traffic accident and her mother was raising four children on her own.

She has shared that her desire to help provide for her struggling family is the reason she aggressively pursued her career in entertainment.

This young woman has earned some accolades along the way, like the Imagen Award, a Teen Choice Award, multiple Young Artist awards, and a Shorty Award.

As early as six weeks old, Bella was a baby model for Parents Magazine. Since then, she has been on numerous catalog covers and advertised for Candie’s, Gap, Diesel, Guess Jeans, and Tommy Hilfiger.

She has also graced the covers of CosmoGirl, Teen Vogue, Seventeen, and Shape. She has also appeared in many music videos and commercials for big names like Neutrogena. 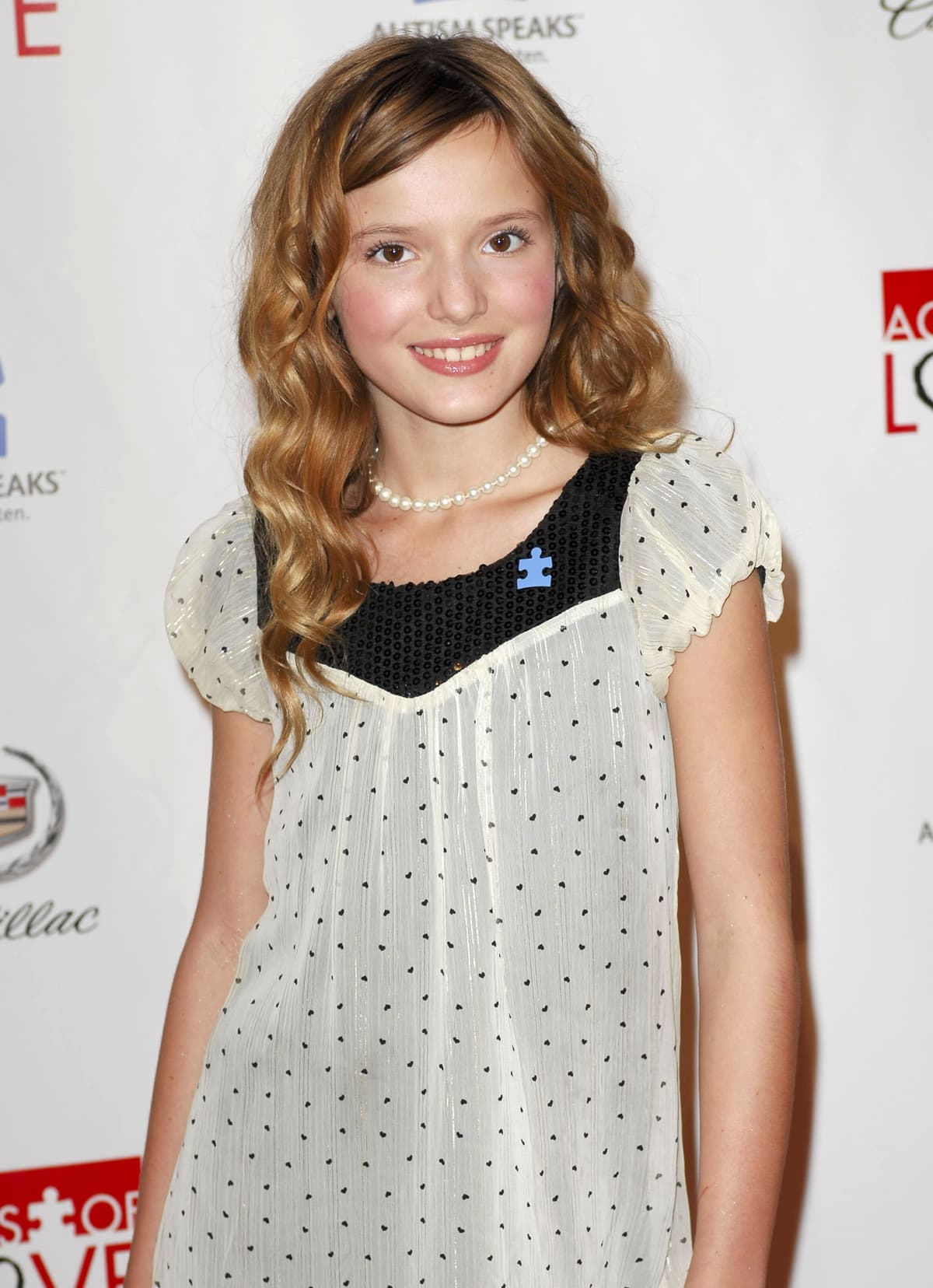 She appeared in minor roles on Entourage and The O.C. and then secured a recurring role on Dirty Sexy Money as Margaux Darling. Bella credits her next role, alongside Taylor Lautner and Christian Slater, in My Own Worst Enemy, as her breakthrough.

Slowly, Bella began to get more roles and gain more fame. She appeared on Season 4 of Big Love on HBO and then earned a role on the Disney Channel sitcom Shake It Up.

Bella starred opposite Zendaya in this buddy comedy that centered around a teen dance show. The show lasted for three seasons before its cancellation. 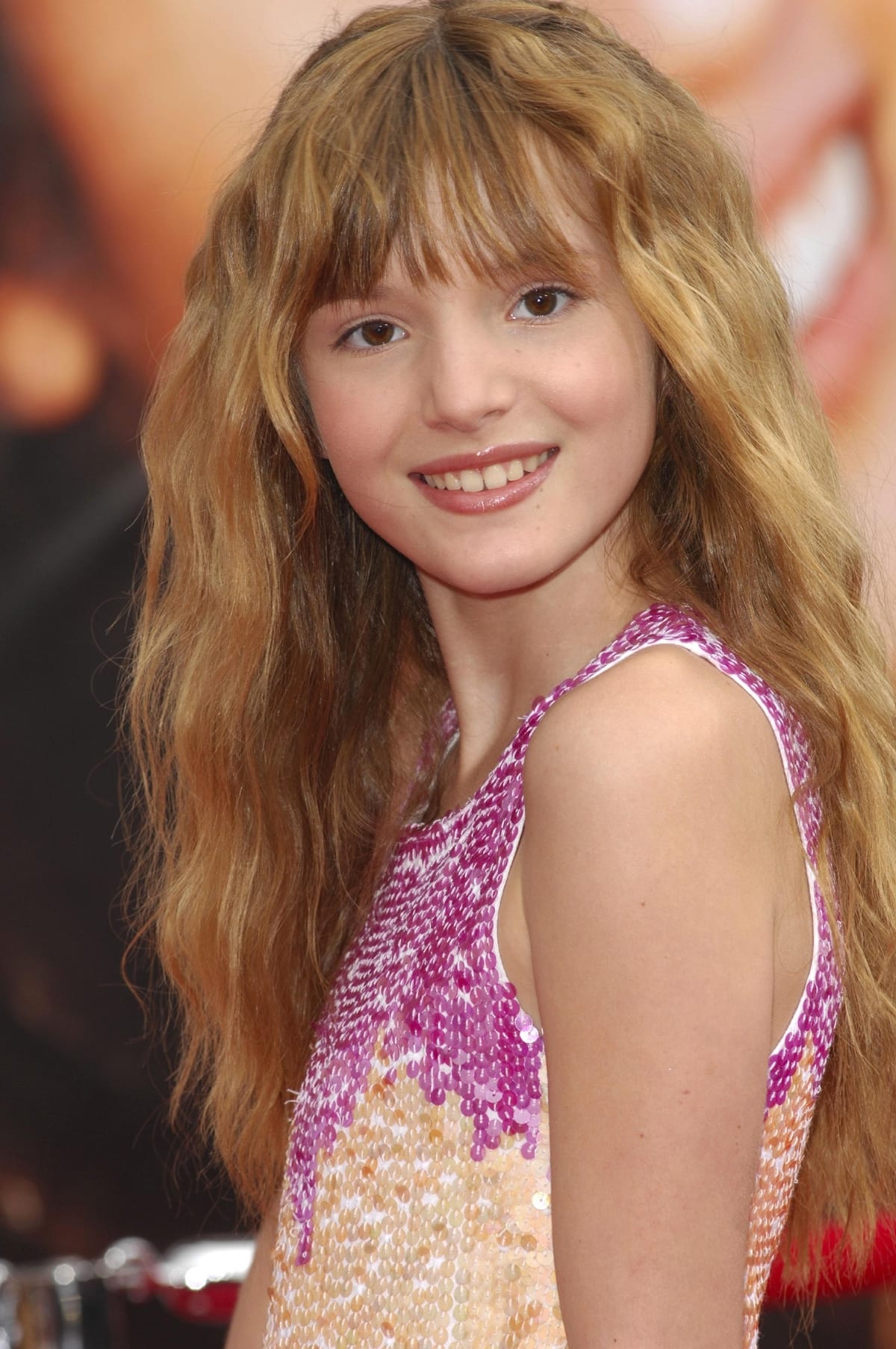 Bella Thorne arrives at the Los Angeles premiere of “Hannah Montana The Movie” at the El Capitan Theatre on April 2, 2009, in Hollywood, California (Credit: Apega / WENN)

Not only an actress, Bella is also a talented musician. She released her first single “Watch Me” in June of 2011 with Zendaya. Bella has credited Destiny’s Child, Britney Spears, and Kesha as her influences and prides herself on pulling inspiration from many different genres.

Today, Bella is estimated to be worth $12 million.

OnlyFans is a website where individuals can share NSFW content with their fans. This content can be free or monetized based on a subscription payment model. Popular celebrity stars on the platform include Corinna Kopf and Sonja Morgan. 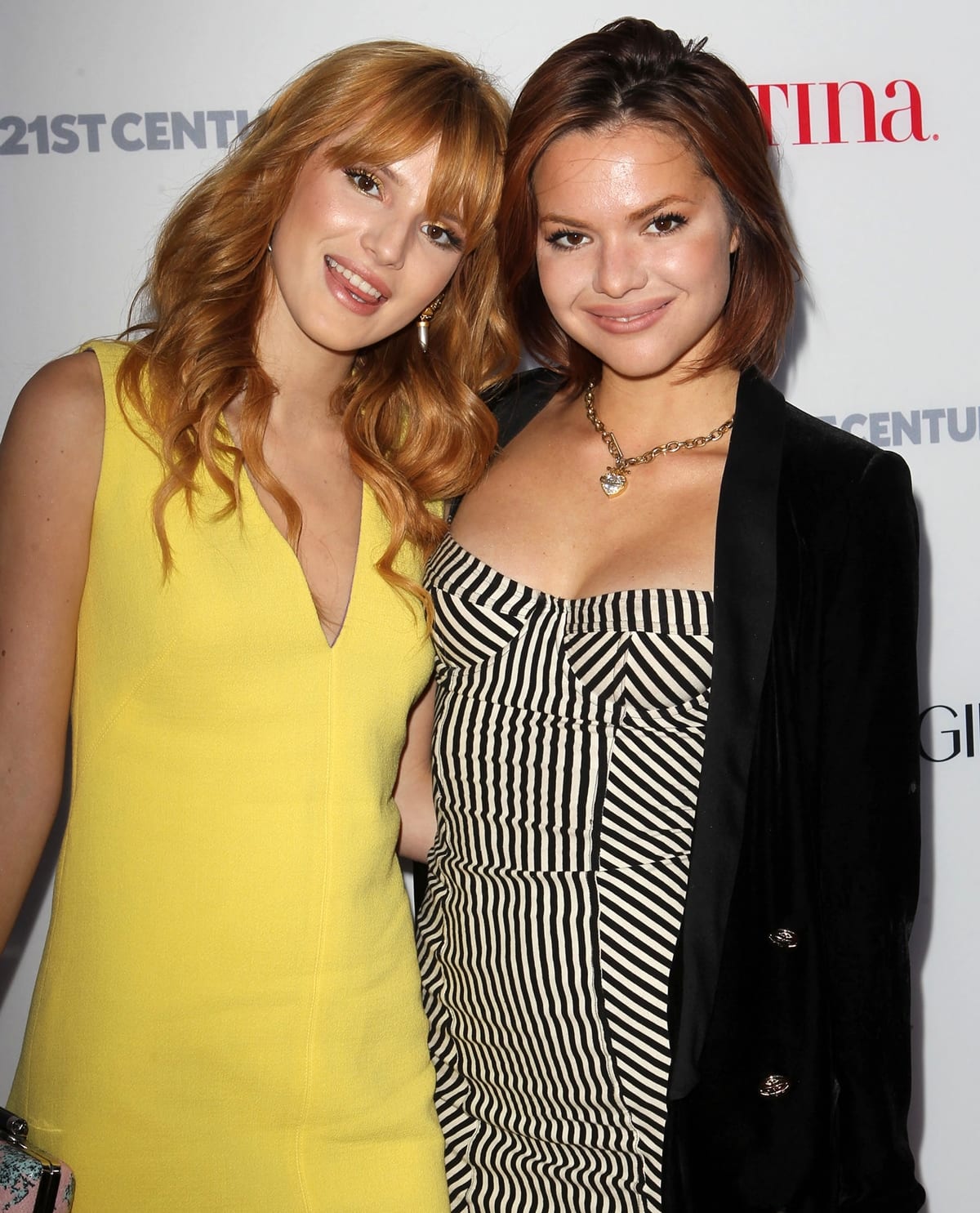 Today, Bella is one of the top three highest-earning celebrities on OnlyFans. She has earned over $10 million in just over one year on the platform. Just days after Bella, her older sister Kaili Thorne has also joined OnlyFans.

Bella identifies as pansexual and has been in polyamorous relationships in the past.

OnlyFans changed their terms of service, adding a cap and holds on payments, and sex workers and content creators on the OnlyFans platform blame Bella Thorne for this.

The changes took place after a number of users asked for refunds when Bella Thorne sold them “naked” photos for $200, but the photos were not actually nude.

According to Bella, these nude photo offers were fake. After this event, OnlyFans imposed $50 payment caps on pay-per-view posts and they implemented holds on payments, forcing some international creators to wait 30 days to receive their funds. 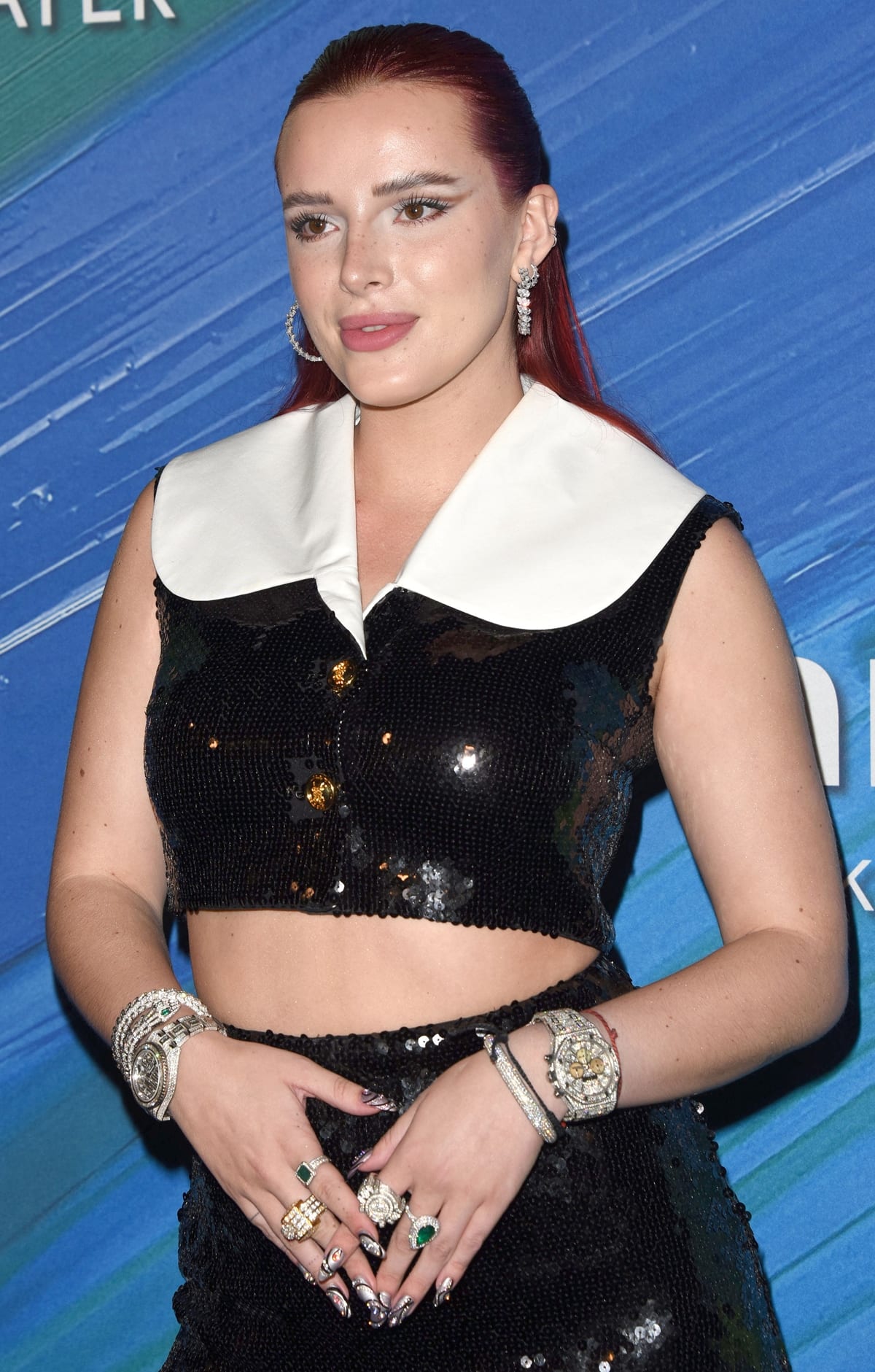 Bella Thorne has been accused of gentrifying OnlyFans and for making it more difficult for sex workers to make money on the platform (Credit: MEGA / WENN)

OnlyFans denies that the changes are a result of Bella, “Transaction limits are set to help prevent overspending and to allow our users to continue to use the site safely. We value all of the feedback received since this change was implemented and we will continue to review these limits.”

Bella issued an apology, saying she only wanted to normalize sex work and that she will speak with OnlyFans about their new policies. 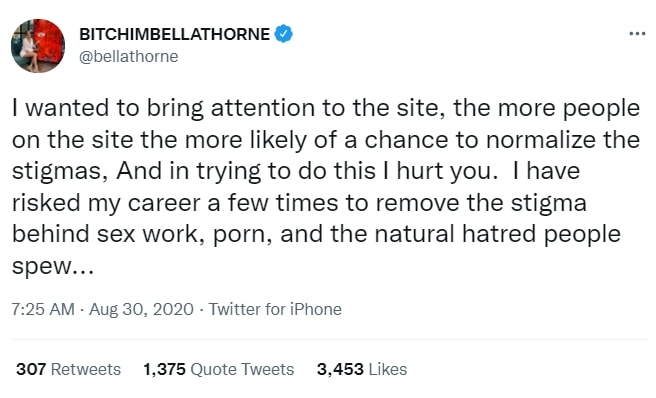 Many users on the site did not buy her “support.” The users dragged Bella on social media, saying that she made light of online sex work and made it into a publicity stunt for herself.

These users don’t understand why Bella, with millions in the bank already, needs to use this platform. Users who used to get paid weekly, now receive a monthly paycheck. That negative financial impact trickles to 450,000 content creators on the website.

Not only did the pay frequency change, but OnlyFans changed its caps for payment limits. With a previous tip and paid post cap of $200, now reduced to $100, creators are simply making less money than before. 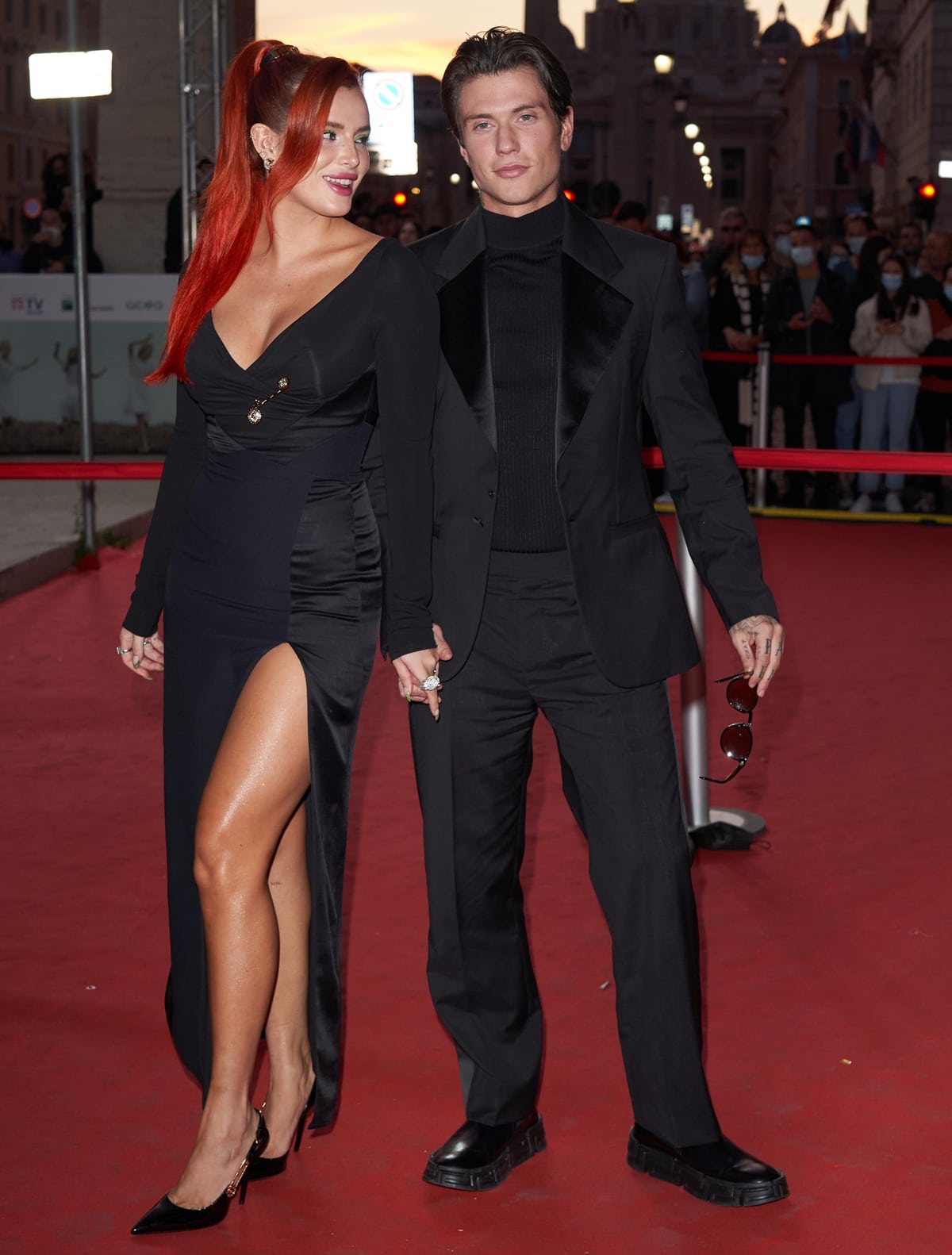 Creators feel like they are being “ripped off.” And whether Bella Thorne is to blame or not, the young actress has definitely come under fire for the timing of her involvement with the introduction of these new policies that seem to hurt, rather than help, many creators on the OnlyFans platform.

After playing a real, live human being in the animated “Alvin & the Chipmunks: The Road Chip,” in 2016 Bella Thorne finally got to lend her voice to an animated character: Cora Veralux of “Ratchet & Clank.” 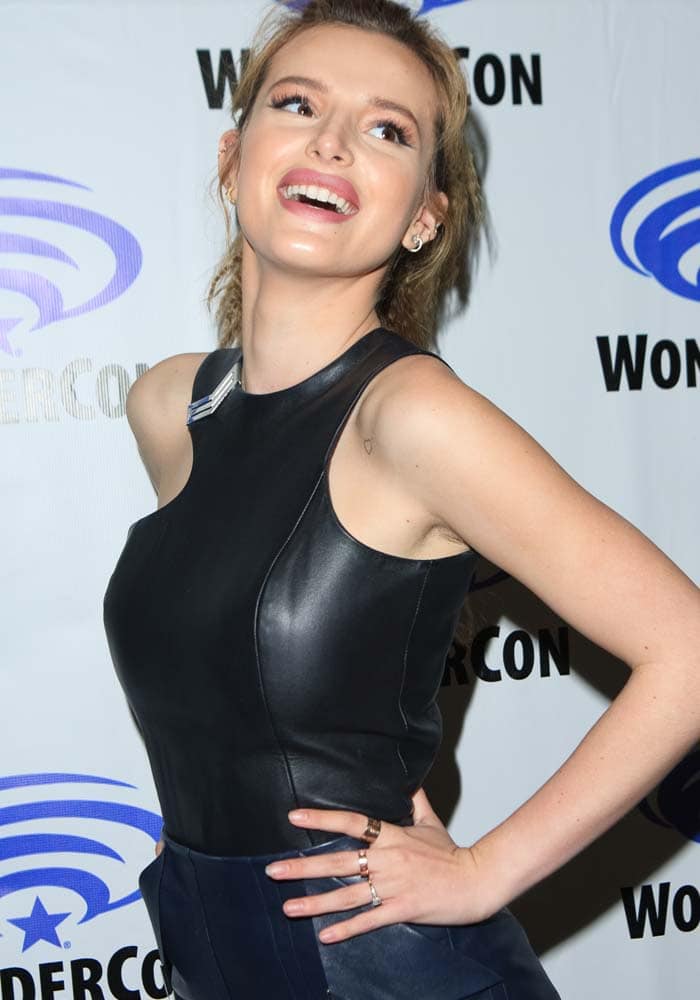 The then 18-year-old made an appearance at the 2016 WonderCon to promote “Ratchet & Clank” and took a minute to talk about what she loved most about working on the computer-animated science-fiction comedy film.

Bella showed up in a full leather outfit. She paired a black leather halter top with a navy Mugler mini skirt. 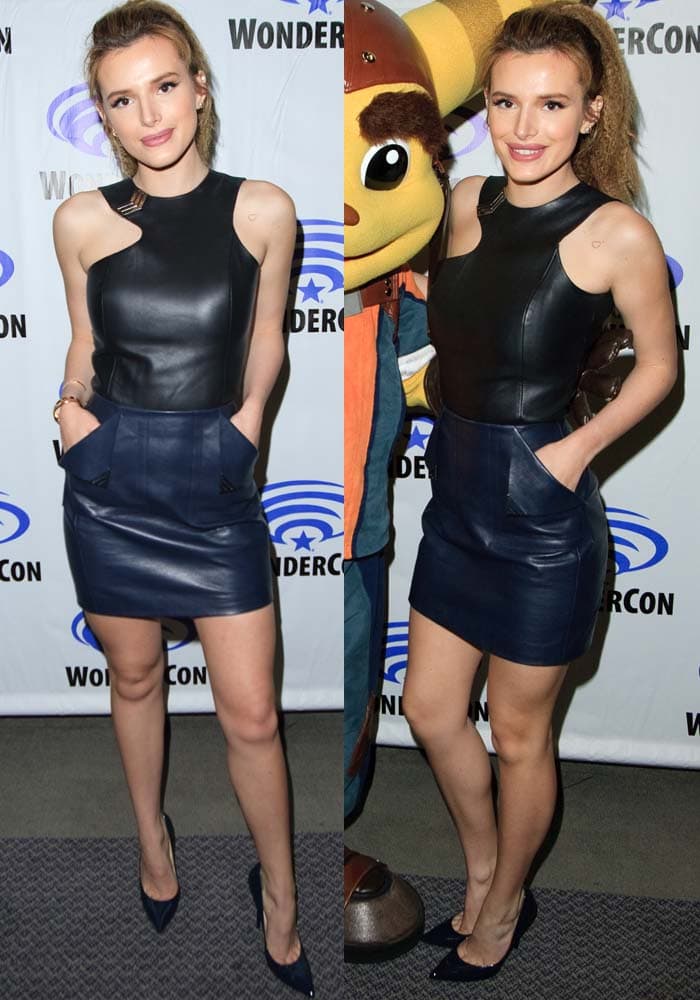 The teenager capped off her outfit with a navy pair of Jimmy Choo “Abel” pumps. 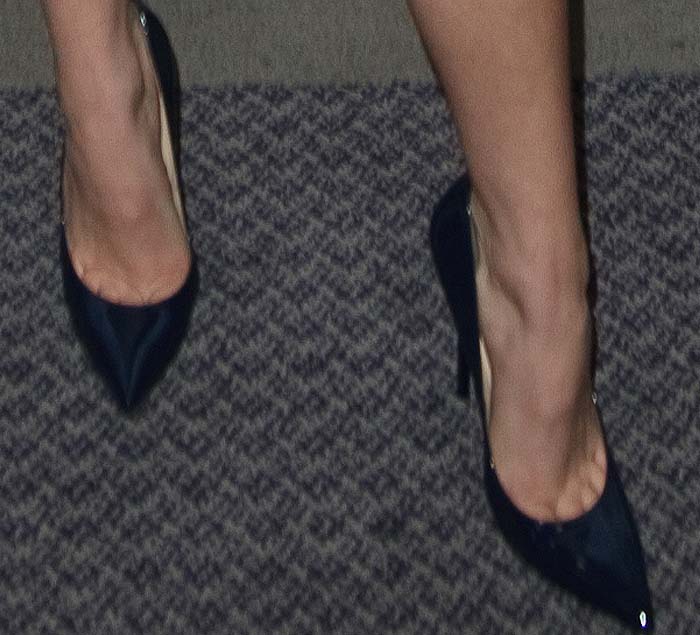 Bella also seemed to sport a brand new tattoo: A tiny heart located on the front of her shoulder, just under her collar bone.

The 5′ 8″ actress said her favorite part about playing Cora was the opportunity to act as a tough character since she doesn’t get to play too many tough roles. 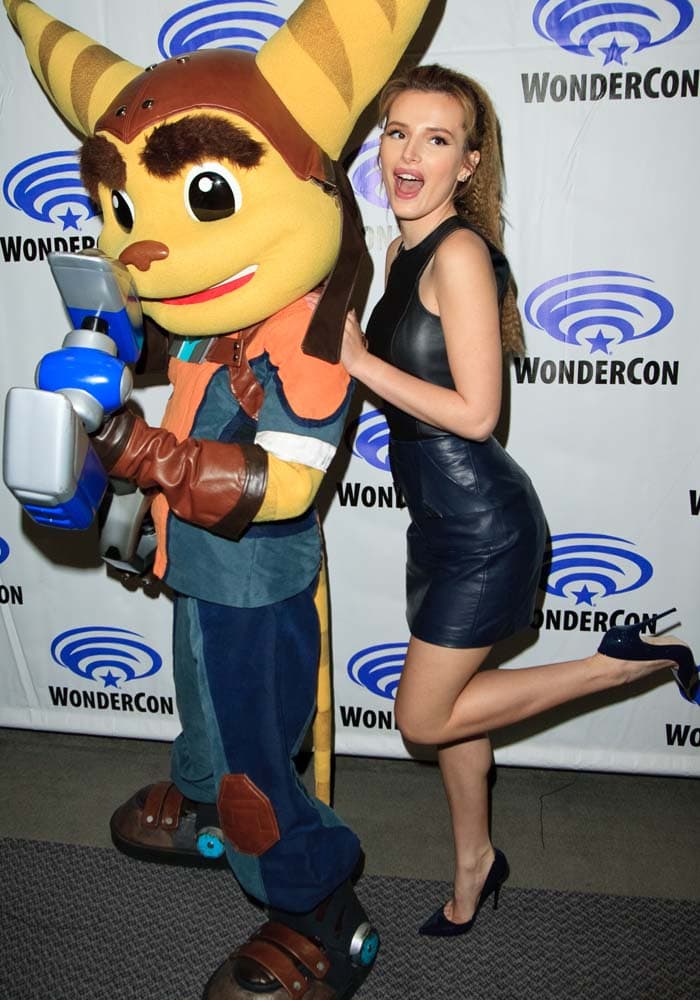 While Bella isn’t much of a tomboy, the actress said she enjoyed tapping into her masculine side for the film.

Navy blue is the new black. You can order the Abel pumps from the popular women’s shoe designer in patent navy blue at Mytheresa. 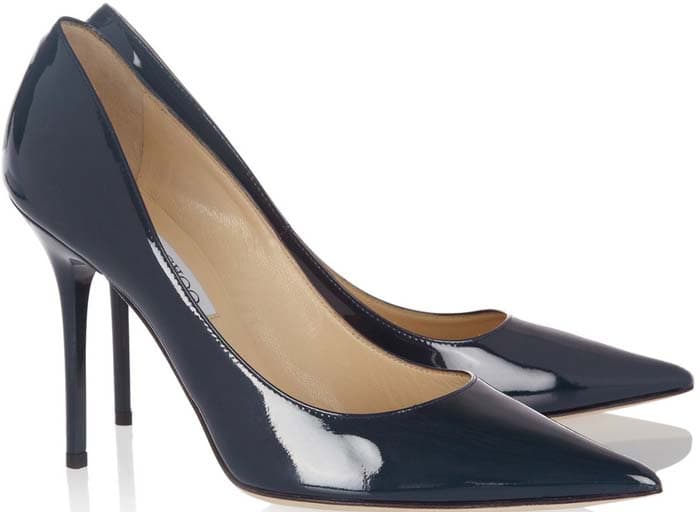