Madelyn Cline is one of the most talked-about actresses of the year, but she was hardly on the radar before now. Somehow, the 24-year-old actress managed to go from being virtually unknown to being a sensation, seemingly overnight.

Madelyn Cline in a black Mônot cutout dress and pointy pumps at the 2021 American Music Awards held at the Microsoft Theater in Los Angeles on November 21, 2021 (Credit: MEGA / WENN)

You might know her best as the pouty beauty, Sarah Cameron on Outer Banks, or from any number of tabloid magazines, websites, or TikTok posts that her image graces. In a world where word spreads like wildfire, there is no doubt that Cline’s star will continue to shine.

Let’s look back to see what led to Madelyn Cline’s fast journey to stardom and everything along the way.

In December 2021, she was spotted on a dinner date with DJ Zack Bia.

Inked by tattoo artist Kate McDuffie of The Ghost Kat, it’s a finger tattoo with the words “tell me more” in thin, capital letters across her index finger.

Did Madelyn Cline got to college? She dropped out of college in South Carolina to become an actress.

Madelyn Cline Started Her Career at an Early Age

Like her on-screen counterpart, Sarah Cameron, Madelyn Cline is comfortable on the beach, as she grew up in Goose Creek, South Carolina, a suburb near Charleston.

Her mom, Pam, was a real estate agent and her dad, Mark, was an engineer, so Cline knew that success comes in many forms. Still, even at a young age, she dreamed of stardom. 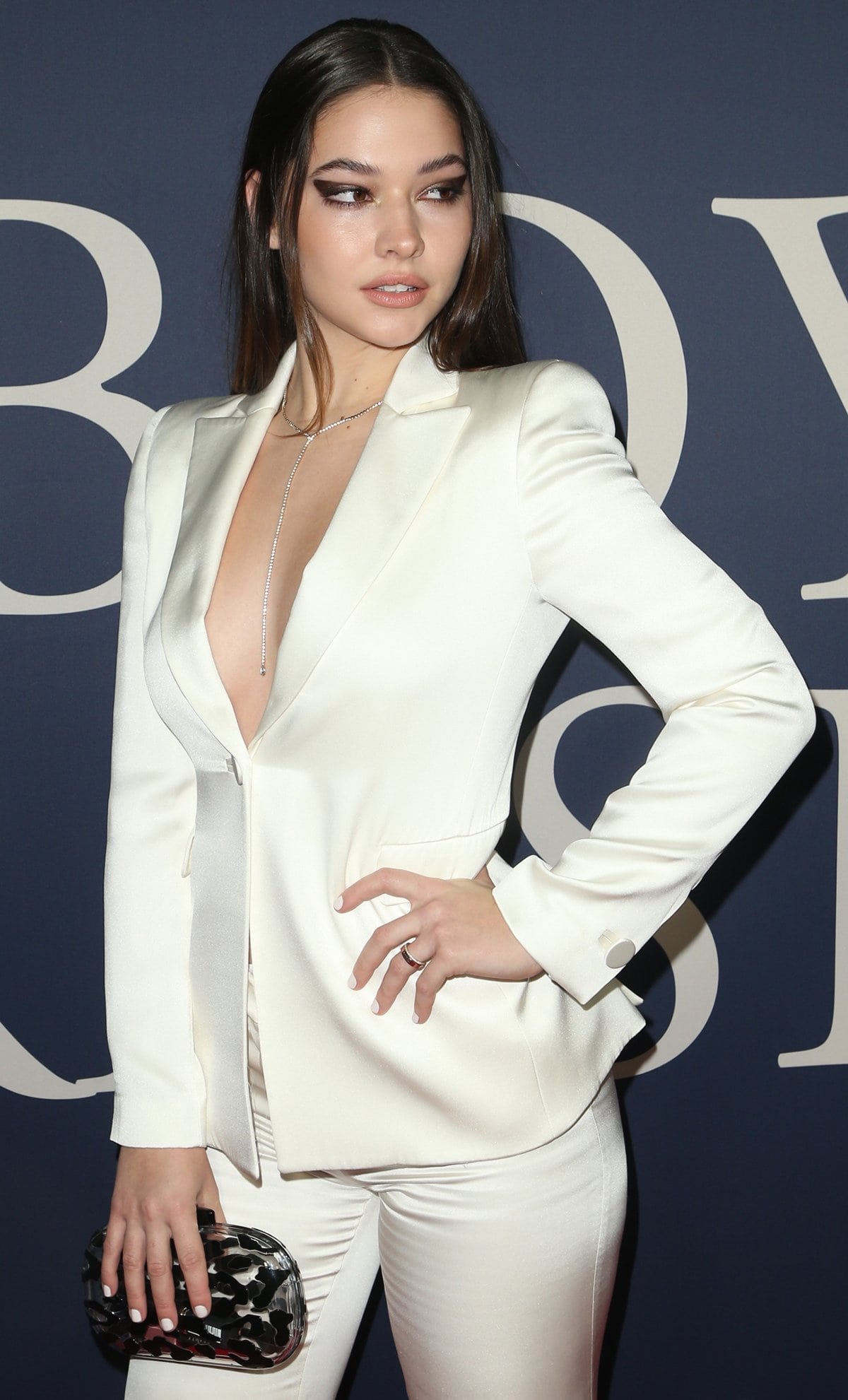 Madelyn Cline in a sexy white suit at the premiere of Focus Features’ ‘Boy Erased’ at Directors Guild of America on October 29, 2018, in Los Angeles, California (Credit: FayesVision / WENN)

Cline is absolutely gorgeous, so it is easy to guess that she was an adorable kid. In 2008, the young Madelyn Cline won a local competition that catapulted her childhood modeling career.

At only ten years old, the actress began modeling and doing commercial print work in New York City. She was featured in numerous publications, such as Parent & Child and American Girl magazine, the latter being the dream of many little girls.

She went on to do campaigns for EZ Bake Oven, Sunny D, Toys R Us, and more, before taking her likeness to the small screen.

As a child, Madelyn Cline began appearing in commercials and realized she had a strong and intense love for acting. 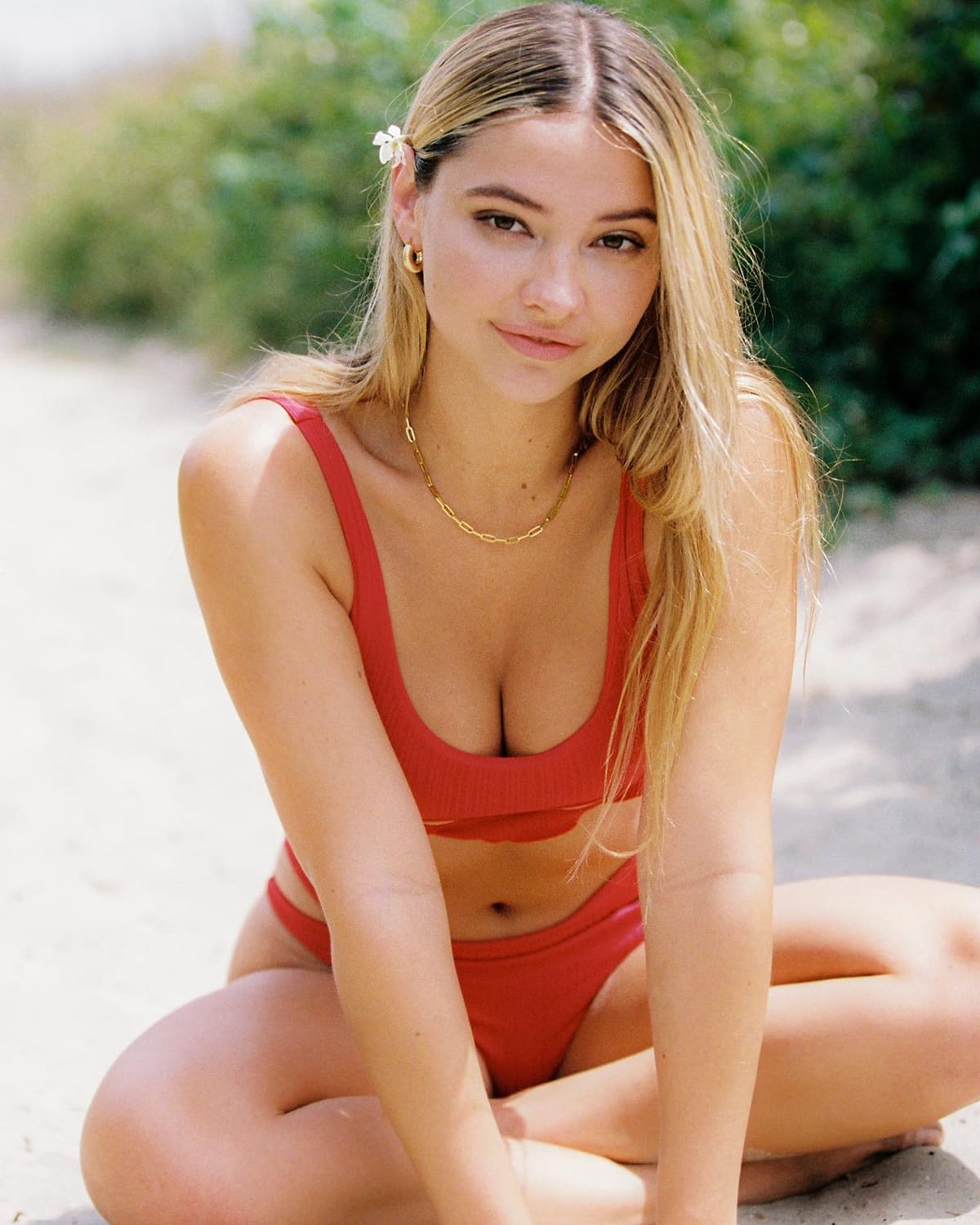 In an interview with Schön! Magazine, Cline said that her acting career was a bit of a “slow burn” saying, “When I was 10, I started going to New York to do commercial print work. I loved the city, I loved being on sets and being around other creatives, and it was a way to save up for college later on, so it was kind of a win-win. I never really grew out of my love for it and combined with how much I loved cinema, I later transitioned into acting.”

Although it may have been a smart move financially, being a young model and actress wasn’t all sunshine and daisies for Madelyn Cline.

As a model, Cline came to understand that her image was everything. Unfortunately, this warped her own self-image and made her extremely self-conscious. 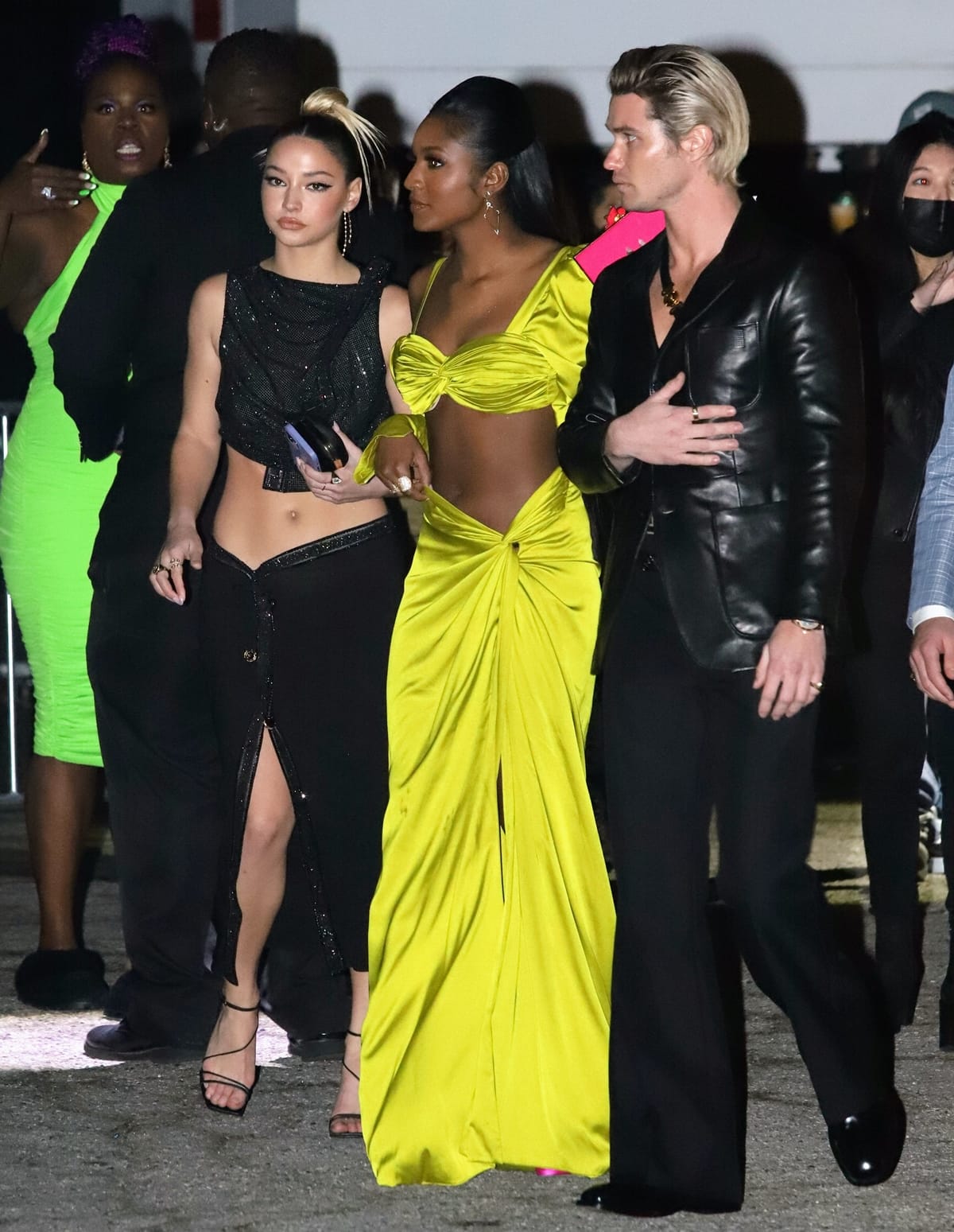 In an interview with Women’s Health, the actress revealed that she struggled to have a healthy relationship with food during the time, as the modeling industry’s stringent standards constantly made her doubt her body.

“When I was younger I did struggle with eating disorders, specifically when I was a teenager,” she said in the interview. “I think I was around 16 when I started working out a lot. I would wake up every morning at 5 a.m. and I would work out for 30 minutes. It was super rigorous cardio every day.” 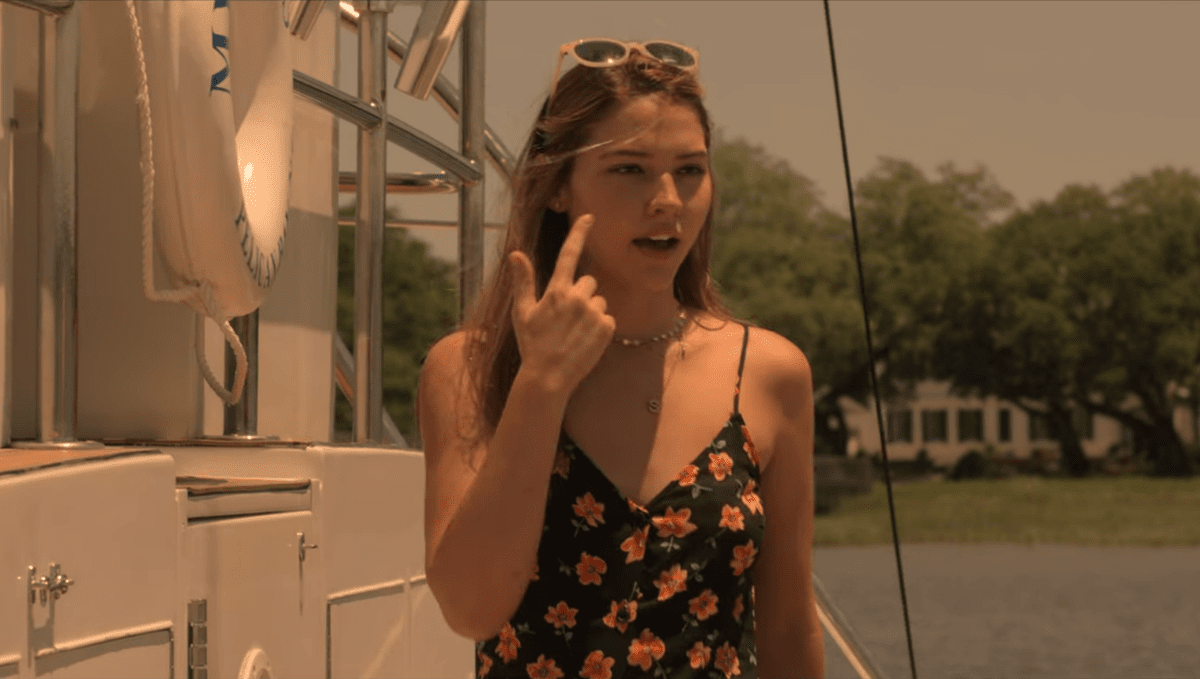 Thankfully, Madelyn Cline was able to realize that she was beautiful the way she was, and her mom, Pam, was instrumental in helping her recover, saying, “My mom was a wonderful help in that. She would stand there in the mirror with me and we would list out things that I liked about my body. After that repetition, those things became solidified in my mind. I like my curves, I like my hips, and after a while I started to love my body. I became so much happier.” 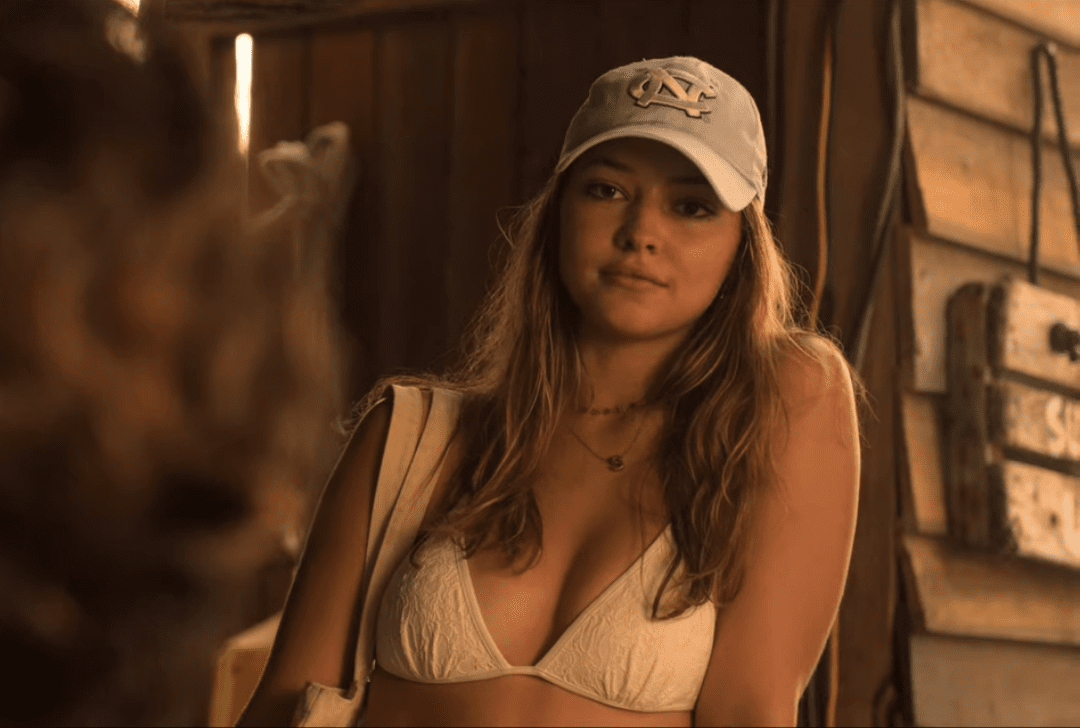 Madelyn Cline was cast as Sarah Cameron in 2018 and the first season of Outer Banks was released on April 15, 2020 (Credit: Netflix)

It is wonderful to hear that Madelyn Cline has been able to overcome her negative body image. Now, even though she is still scrutinized, the actress is celebrated for being absolutely gorgeous.

There are rumors that Cline has had a number of procedures done — specifically lip fillers for her iconic pout, a nose job, and breast augmentation — but the actress has never confirmed that this is the case. Either way, who cares? She looks great!

After high school, Madelyn Cline went on to go to college at Coastal Carolina University. However, this coincided with her acting career picking up, and the actress landed multiple smaller roles in titles such as The Originals and Stranger Things.

Ultimately, Cline was only enrolled in college for a whopping six weeks before she dropped out to pursue her acting career. Her parents weren’t pleased, but she knew in her heart that this was what she truly wanted to do. 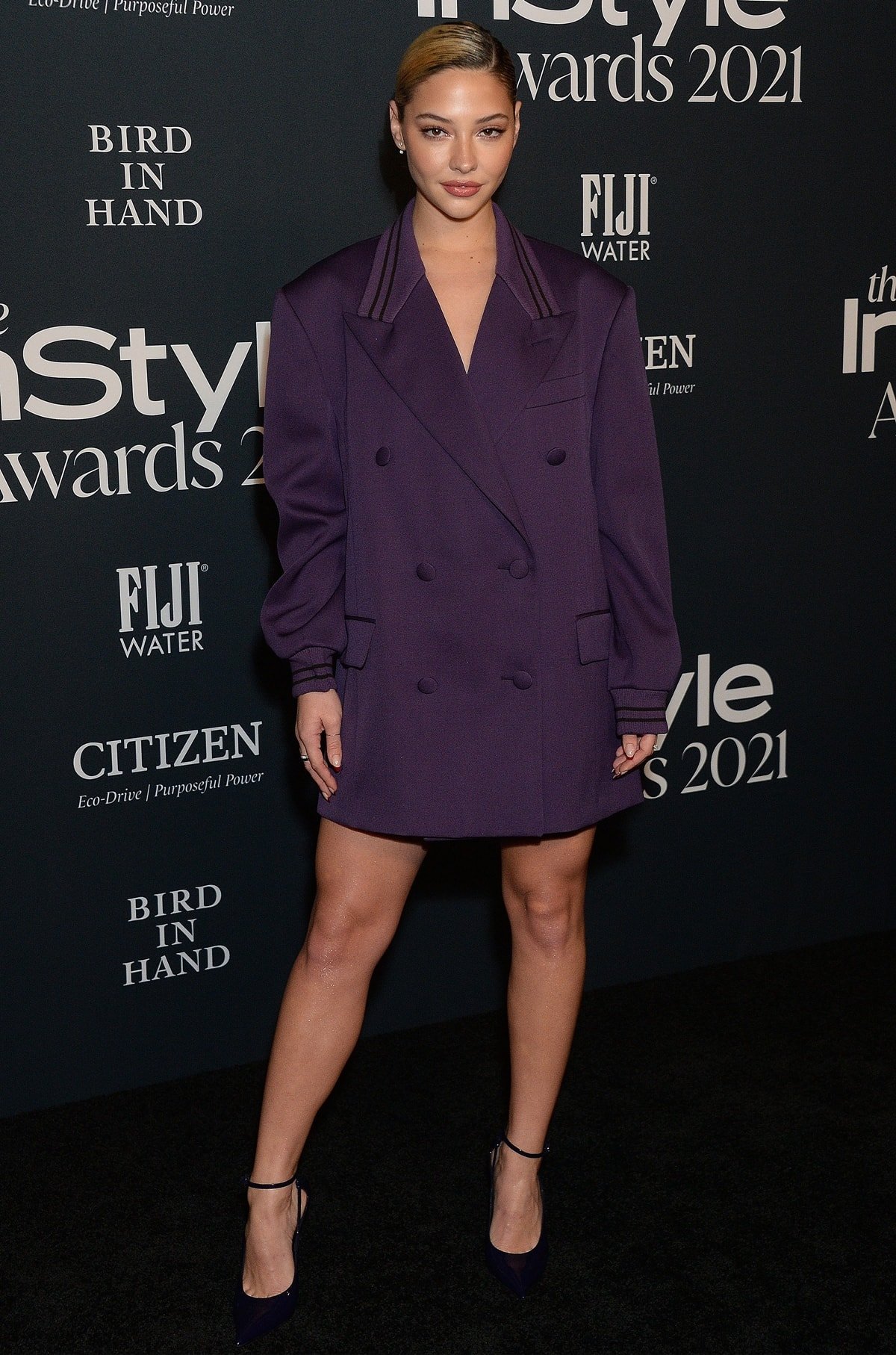 Madelyn Cline in an oversized Lanvin purple blazer and ankle-strap pumps at the 2021 InStyle Awards at The Getty Center on November 15, 2021, in Los Angeles, California (Credit: MEGA / WENN)

“I had run out of excused absences at school and I wanted to carry through with my studies, but in my heart, I knew I didn’t want to continue splitting my time – I wanted to at least try to pursue [acting] full time,” the actress told Schön! Magazine.

“So, I ended up dropping out, packing my car up, and leaving for LA. It was one of those moments where it felt like there was absolutely no going back. It was terrifying and also the most exciting.”

Eventually, she received the script for Outer Banks, not knowing that it would change the trajectory of her life. She wasn’t totally on board at first, though, telling Vogue, “The log line was basically ‘four friends on a treasure hunt.’ And I was like, ‘I don’t know, it’s a little corny.’”

The script grew on her, though, and Cline auditioned. She had originally been slated to audition for the role of Kiara, but told her agent that she “didn’t want to white wash” the character and wanted to audition for Sarah, instead. 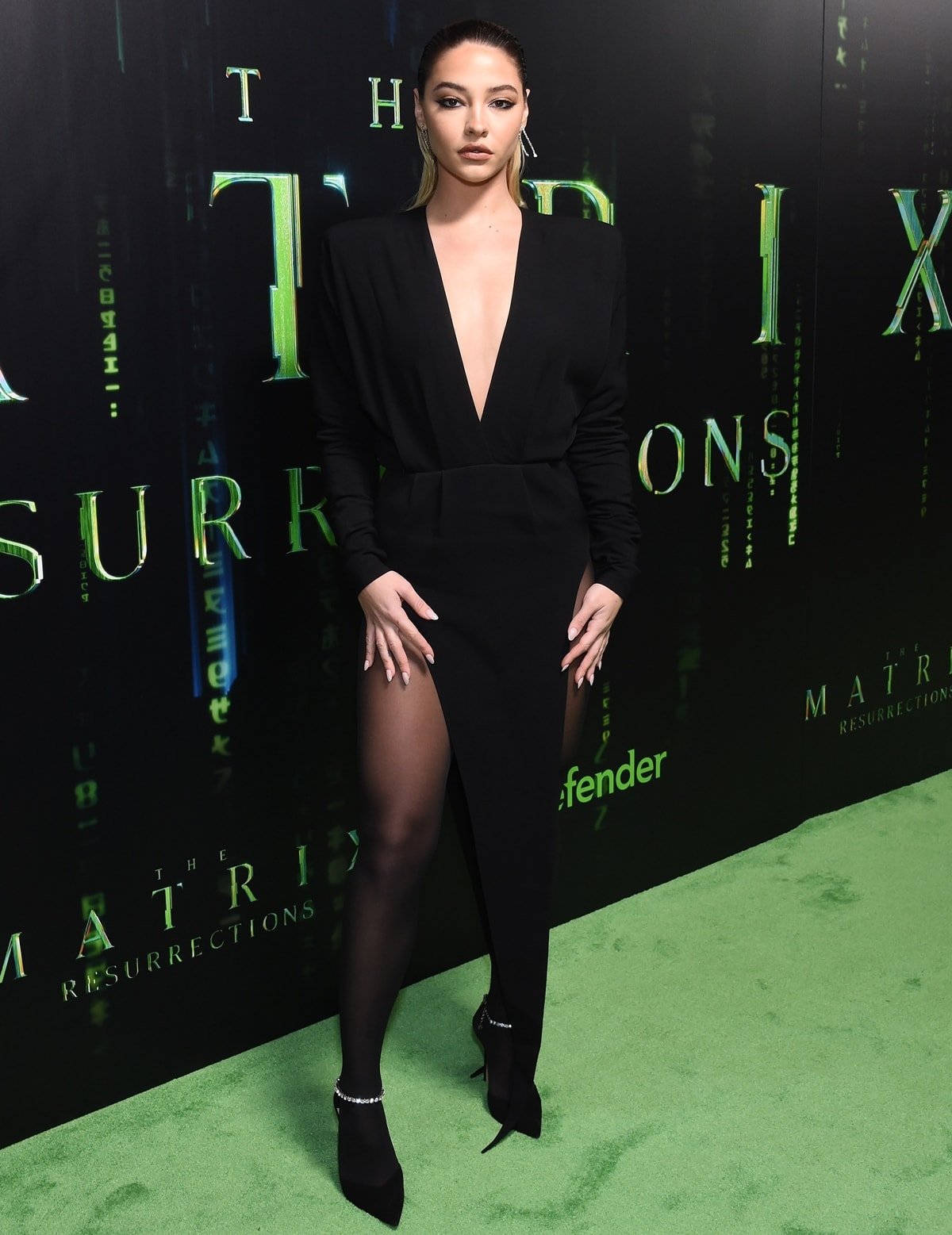 This was a great move on Cline’s part, as she received a callback to meet with producers in Charleston, South Carolina, near to where she grew up and where her parents still lived. The fact that she felt so at home there certainly gave the actress an edge, and she was informed that she had secured the role of Sarah Cameron — her first starring role in a television show.

“It all happened so quickly that I just remember thinking, ‘I don’t know, I feel like this is all happening so fast, this is all too good to be true!’” she told Vogue. “I feel like they’ve got the wrong gal and we’re going to go to the table read and in the end they’re going to be like ‘…she’s not Sarah.’ But, I guess it ended up working out!”

It definitely did work out, and Outer Banks became a smash hit the moment it premiered on Netflix. Now, Madelyn Cline is a bonafide star.

Drama and Romance Behind the Scenes of Outer Banks

There is just as much drama off-screen as there is on-screen with Outer Banks. As characters are falling in love, so are the actors!

Many fans have “shipped” Madelyn Cline and her co-star Austin North, who play Sarah and Topper, respectively.

Cline and North have fantastic on-screen chemistry, so it makes sense that fans would draw the conclusion that the actors are dating in real life. Unfortunately, this is not the case, and fans will simply have to be disappointed. 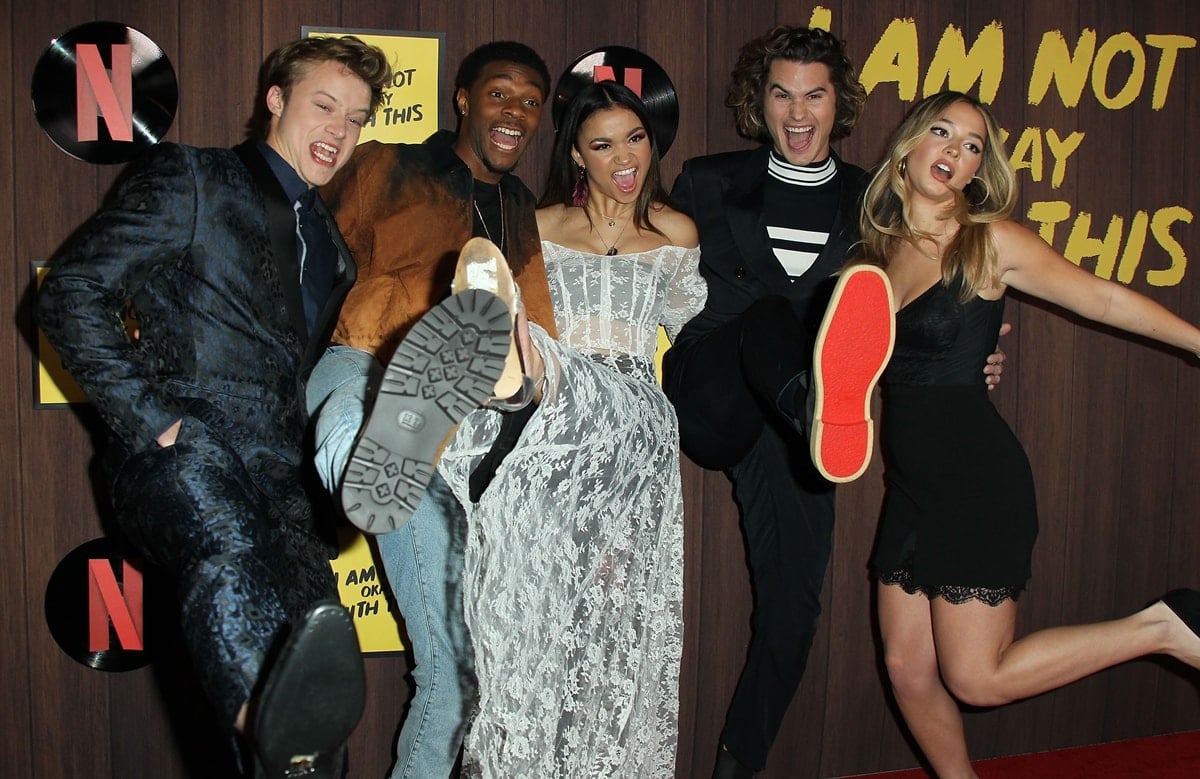 However, in June 2020, Madelyn Cline revealed that she was dating a different Outer Banks co-star, Chase Stokes.

“People were already speculating… people knew before we said anything!” the actress said in an interview with Entertainment Tonight.

Working with your significant other isn’t always an easy undertaking, though. Cline and Stokes have had their fair share of off-screen drama, even breaking up for a short time. However, much to the delight of fans, the couple got back together. Now, the couple seems to be on another break, but there is speculation that the two will reconcile.

What Madelyn Cline Is Doing Now

Madelyn Cline is still reprising her role as Sarah Cameron on Outer Banks, but her newfound fame has led her from the small screen to the silver screen.

One of the hottest women in Hollywood, she recently starred in a psychological thriller movie called The Giant and will appear in the Knives Out sequel which is slated to premiere in 2022.