On July 3, 2021, Gwen Stefani and Blake Shelton finally married in an intimate ceremony at Shelton’s Oklahoma ranch with 40 friends and family members. He reportedly built a chapel with the intention of marrying Stefani there.

However, fans quickly realized that their fellow The Voice judge Adam Levine was not in attendance. Instead, the Maroon 5 singer and his wife Behati Prinsloo were spotted enjoying the sunny weather in Miami, Florida. 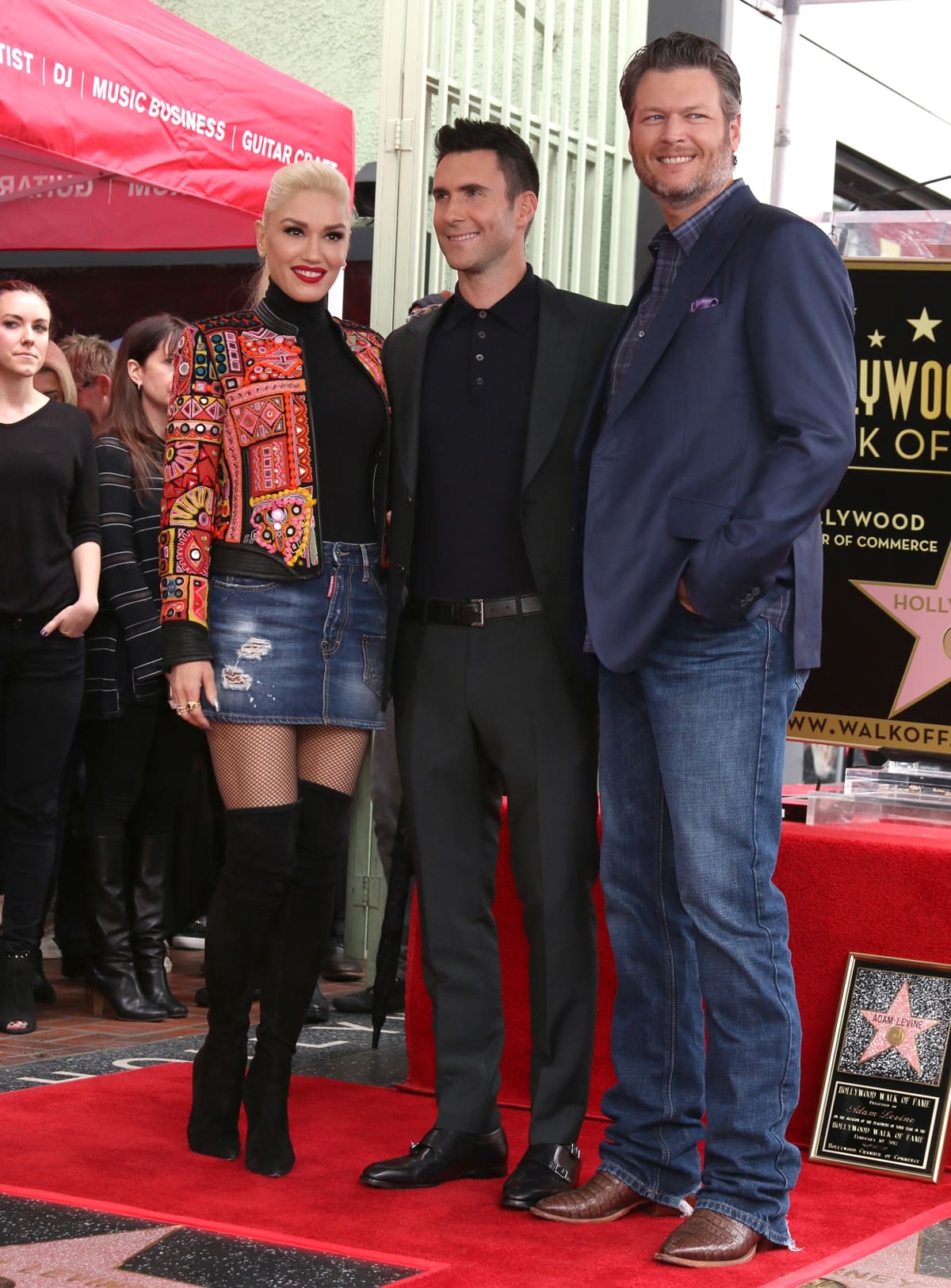 “That’s the reason we didn’t invite him to the wedding is that interview he did on your show,” Blake revealed. “It’s like, ‘I’m not inviting him.’”

“Well, we’ll never know,” Blake replied when asked if Adam would’ve been invited if he hadn’t said what he did. “I purposely did not invite Adam Levine to my wedding — and I think it’s funny,” Shelton added.

In April 2021, Maroon 5’s lead vocalist joked on Ellen‘s show that he didn’t support Blake and Gwen’s marriage. “I don’t support their marriage,” Adam joked. “She’s so cool and he’s not,” he added.

“I’ll go to the wedding and I’ll object,” Adam said. “I probably won’t be invited now that I’m saying this on live television. But I’ll be there somehow.”

Gwen Stefani and Blake Shelton posed together on the red carpet as they arrived at the 2019 E! People’s Choice Awards at the Barker Hangar in Santa Monica, California, on November 10, 2019 (Credit: WENN)

The No Doubt frontwoman-turned-solo star Gwen Stefani met Blake Shelton for the first time when joining him, Adam Levine, and Pharrell Williams as a coach on The Voice in April 2014.

They officially started dating in November 2015 when a rep for Shelton confirmed the romance, saying, “Gwen and Blake are longtime friends who have very recently started dating.”

Stefani revealed to Ryan Seacrest, “To be super honest, it is kind of crazy we both went through the same thing at the same time,” adding that they bonded through their divorces. 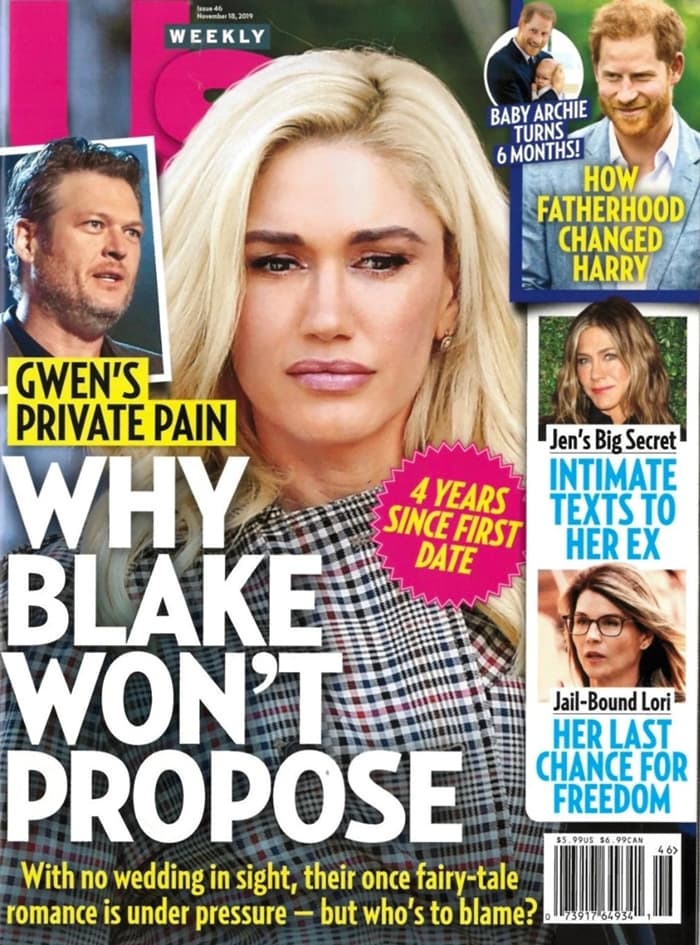 Us Weekly ran the following headline on the cover of their print publication: Why Blake Won’t Propose (Credit: Us Weekly)

While Us Weekly reported that Blake Shelton was ready to propose after just a few months of dating in 2016, the couple waited to get married because Stefani was waiting for her previous marriage to be annulled by the Catholic Church.

The magazine claimed Stefani wanted to get married in a proper Catholic ceremony, which couldn’t happen until her marriage to Gavin Rossdale was annulled.

The No Doubt singer finalized her divorce on April 8, 2016, after 14 years of marriage. They have three sons together. 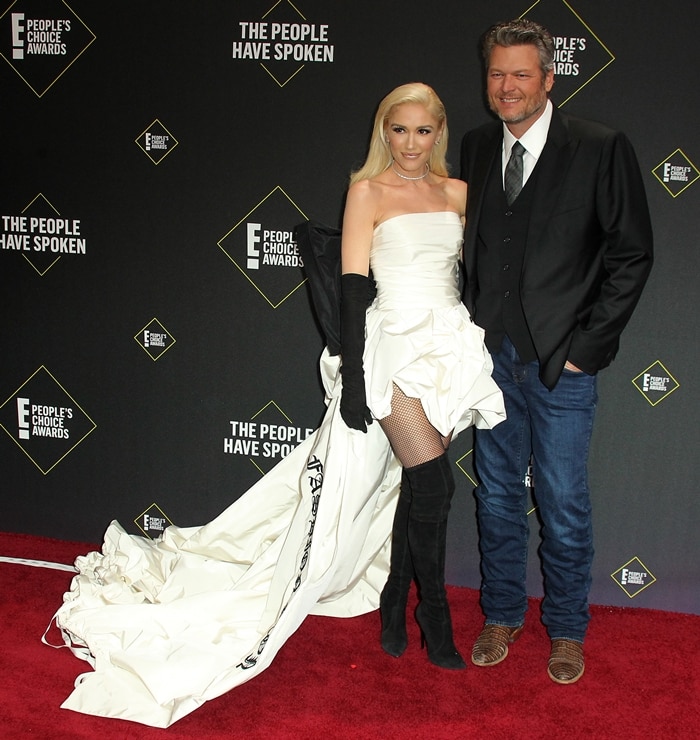 The gossip magazine quoted a source saying, “They’ve had some heated discussions” over the issue and that Shelton was anxious to get married. The insider added, “In some ways, they have this dark cloud hanging over them. They’re both emotional about wanting to get married as soon as possible.”

While she’s a Christian and frequently takes her sons to church, according to fact-checking website Gossip Cop, a spokesperson for Gwen Stefani said there was no truth to the rumor.

Regarding the diamond on her ring finger at the 2019 People’s Choice Awards, she clarified to E! News that it was just a fashion accessory. 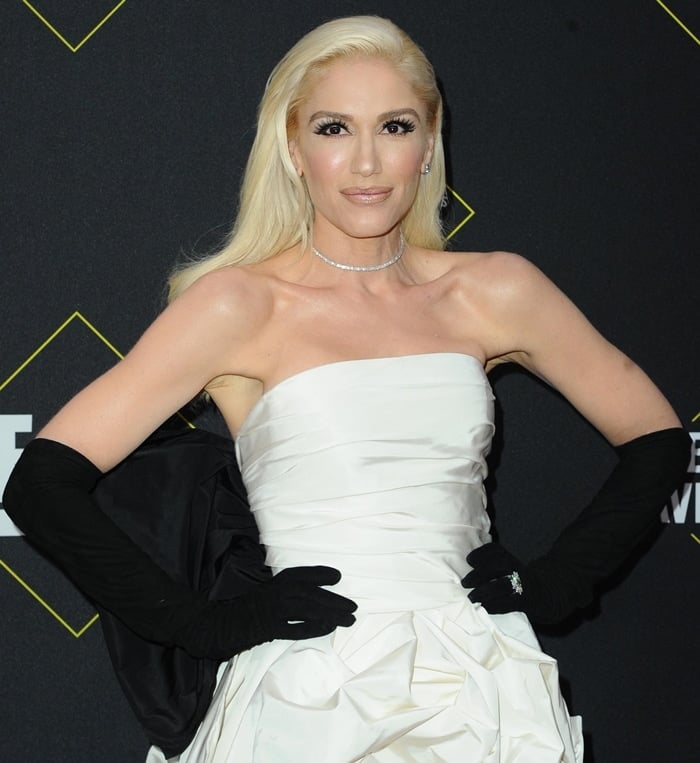 “It might be a real ring, a real diamond but it’s not a wedding ring. No, no. It actually doesn’t fit over the glove on this hand so I put it on this hand. But looks good, right?” Gwen told the gossip website and added that she’ll let fans know if they get engaged.

The then 50-year-old entertainer, who was honored by Jeremy Scott with the Fashion Icon award, looked stunning in a white Vera Wang Fall 2020 bridal gown with a long train, fishnet stockings, opera gloves, and thigh-high black boots from Casadei that you can buy at Farfetch. 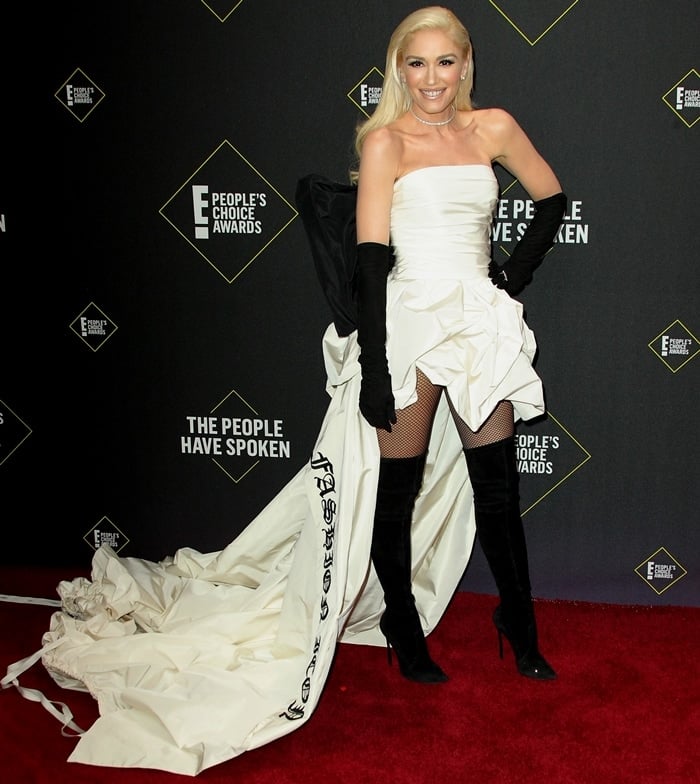 Gwen Stefani’s custom bridal dress was made to read ‘FASHION ICON’ instead of ‘LOVE’ (Credit: WENN)

While making an appearance on SiriusXM’s Andy Cohen Live, Gwen revealed that she did not know Blake Shelton existed before meeting him on The Voice.

She added, “Now I’ve learned about country and accepted that he’s a true hillbilly…He’s literally a country jukebox. He knows every single song forever. I love that we’re from different genres.” 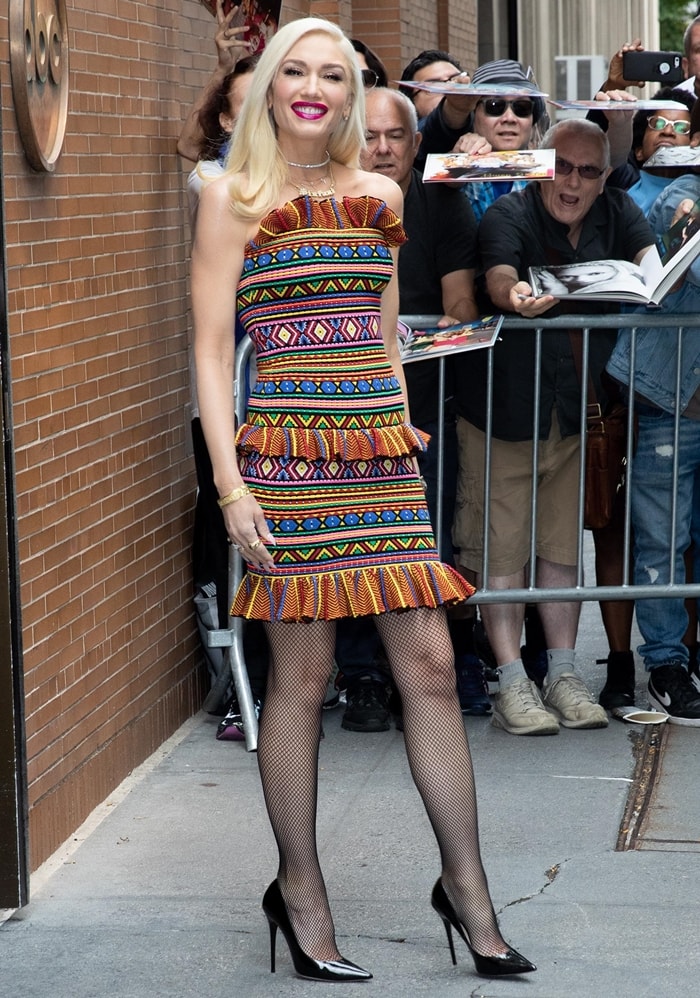 Gwen Stefani in Christian Louboutin pumps and fishnet tights after filming a segment on The View in New York City on September 24, 2019 (Credit: WENN)

In August 2015, Gwen Stefani seemed to have bounced back pretty well after announcing her divorce from Gavin Rossdale a few weeks earlier. 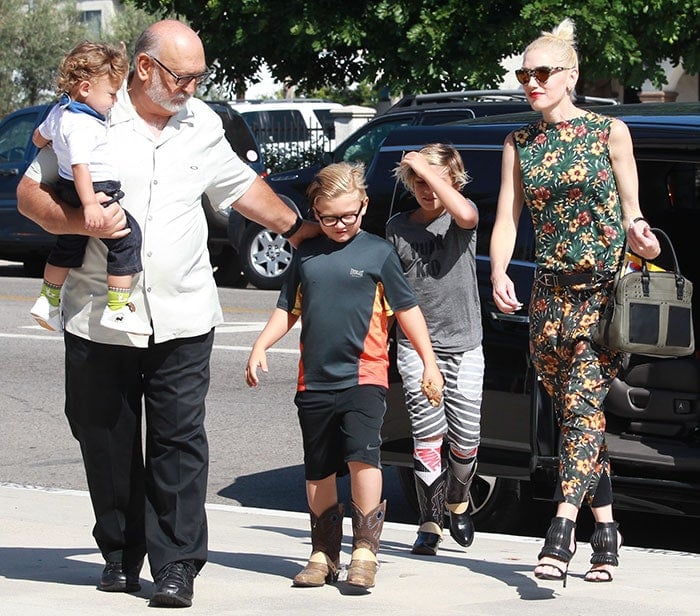 She attended a church service at St. Brendan’s Catholic Church in the Windsor Square section of Los Angeles with her three kids, Kingston, Zuma, and Apollo, and her parents, Dennis and Patti. 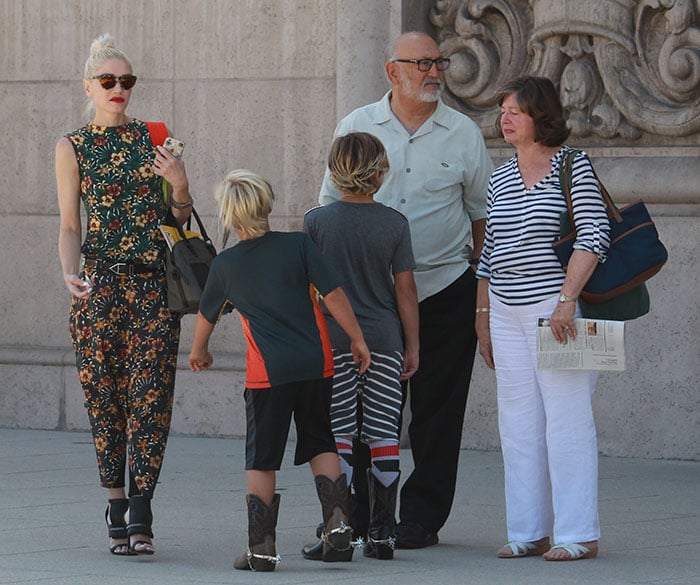 The ever-stylish singer brought the controversial drop-crotch pants trend back! 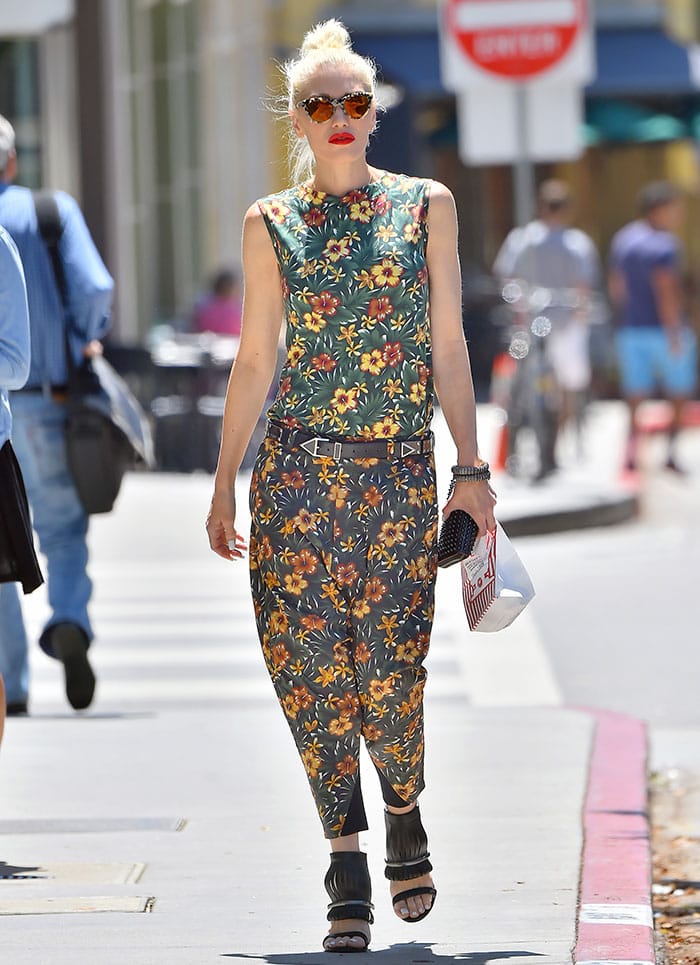 Gwen Stefani steps out in a pair of floral-printed, harem-style pants and a coordinating sleeveless top (Credit: WENN)

For her Sunday service, Gwen donned a pair of belted floral-printed harem-style pants with tapered ankles and a matching floral sleeveless top, creating the illusion of a jumpsuit. 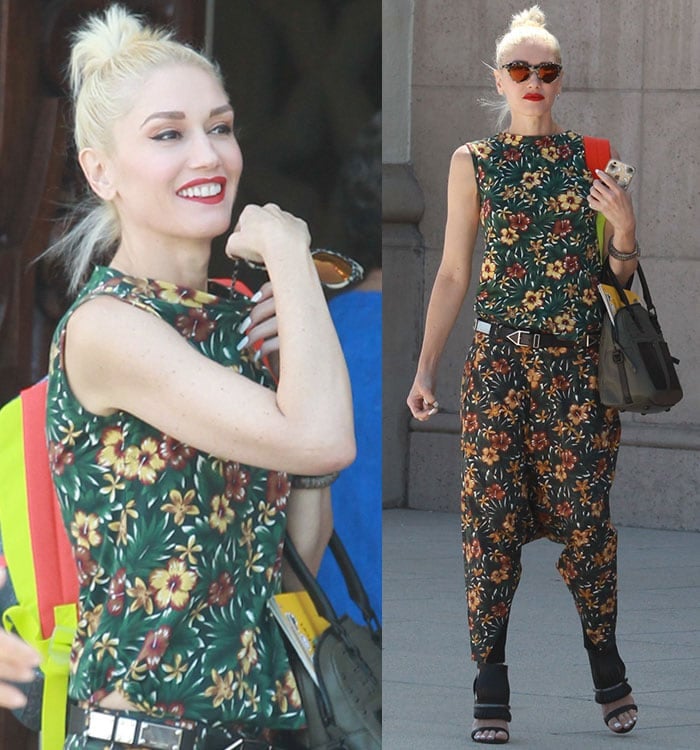 Keeping her accessories simple, wearing only a snake bangle, and a two-tone handbag, she pulled her platinum blonde hair up into a topknot and sported her signature bright red lipstick. 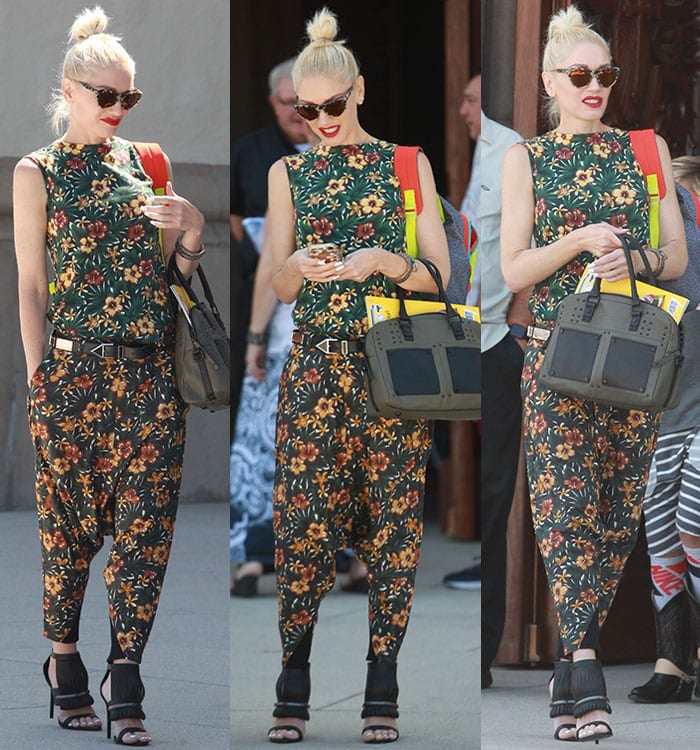 Gwen Stefani finishes off her outfit with black accessories, including a handbag and stilettos (Credit: WENN)

Later that day, the mom-of-three was spotted at a park in Los Angeles. 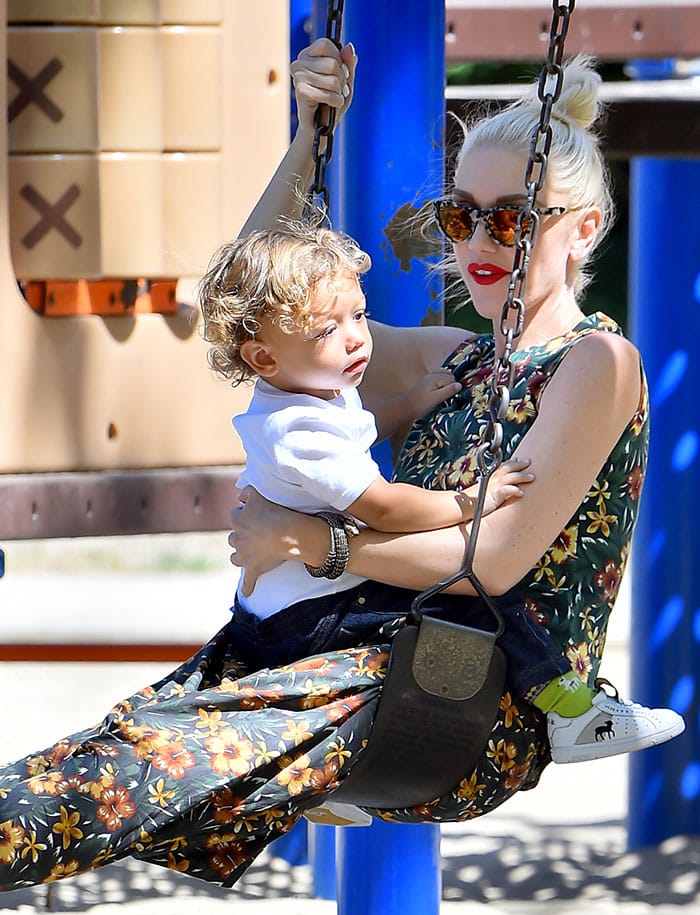 Gwen Stefani swings at the park with her youngest son, Apollo, in Los Angeles on August 23, 2015 (Credit: WENN)

She wore the same outfit at the park but went barefoot as she stepped on the sand and played on the swing set with her youngest son, Apollo. 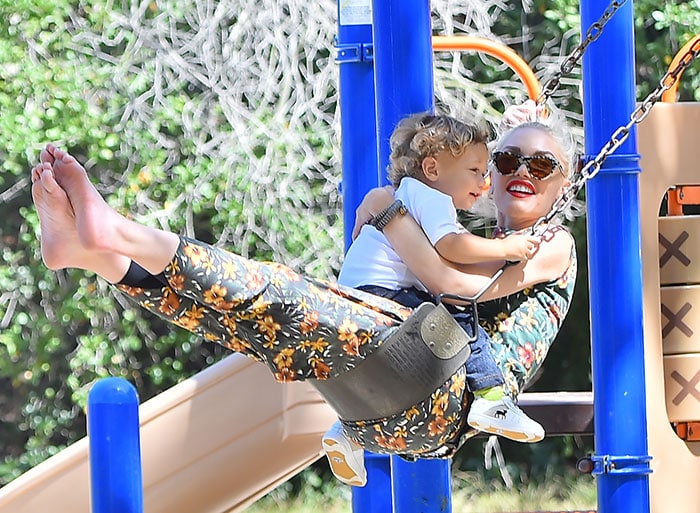 Gwen Stefani ditches her shoes as she spends time swinging with her son Apollo at a Los Angeles park (Credit: WENN)

Before she tossed aside her shoes to play in the sand, Gwen had been wearing her new favorite heels from her L.A.M.B. collection. 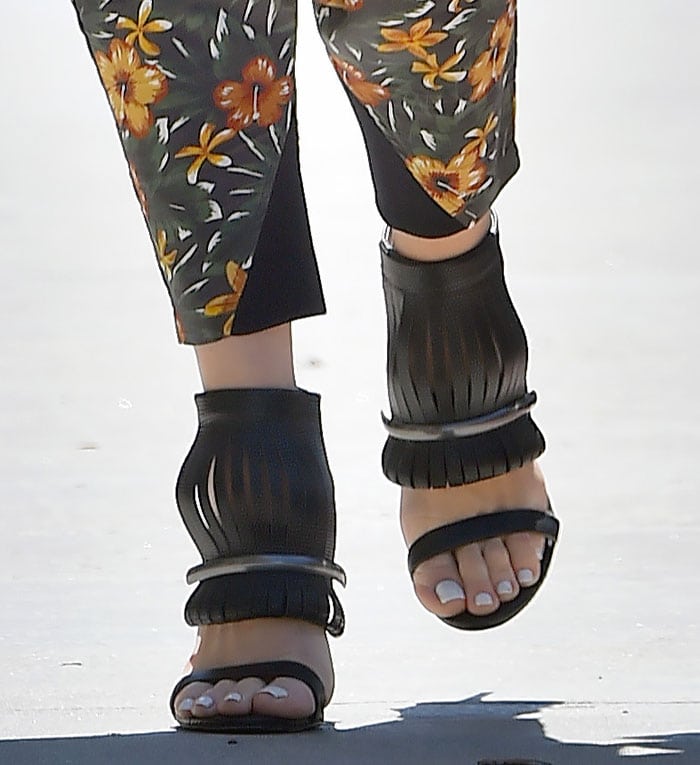 Gwen Stefani shows off her pedicure in a pair of “Media” sandals (Credit: WENN)

How about her heels? You can get these L.A.M.B. sandals in black and white/gray versions at Amazon. 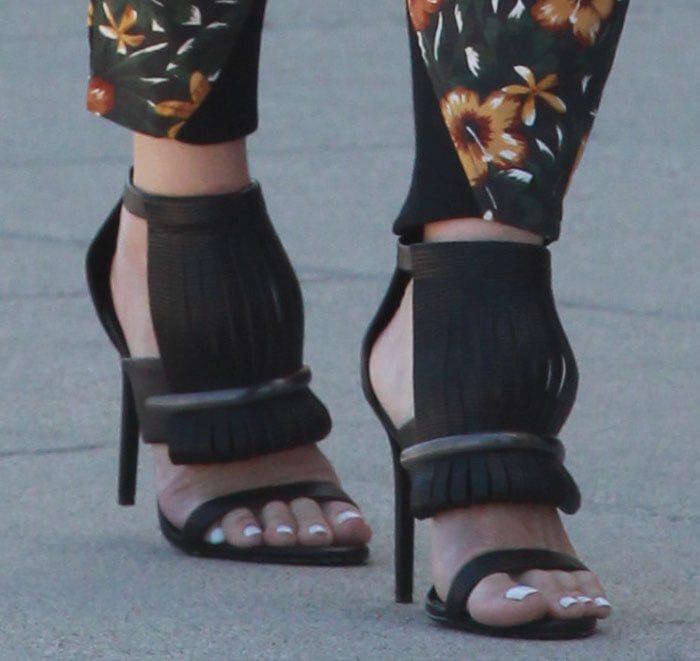 Gwen Stefani’s sexy feet in sandals from her own brand, L.A.M.B. (Credit: WENN) 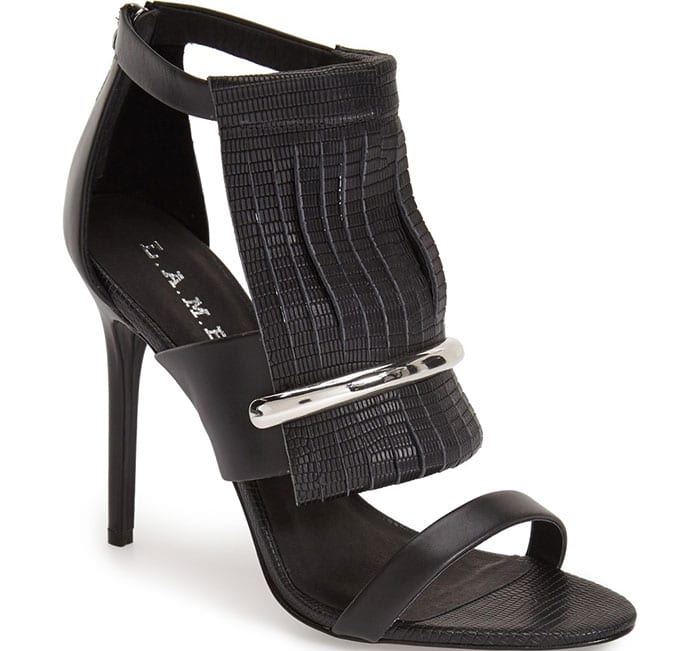 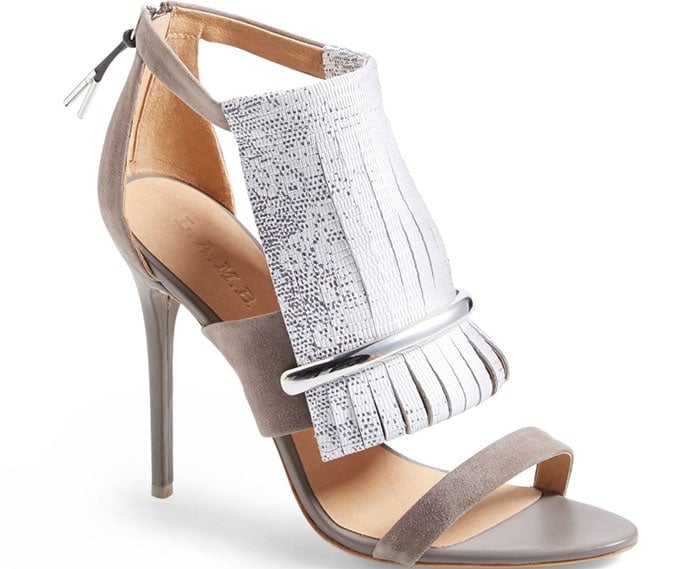 In July 2012, Gwen Stefani was spotted looking as edgy as ever at the 2012 Teen Choice Awards. 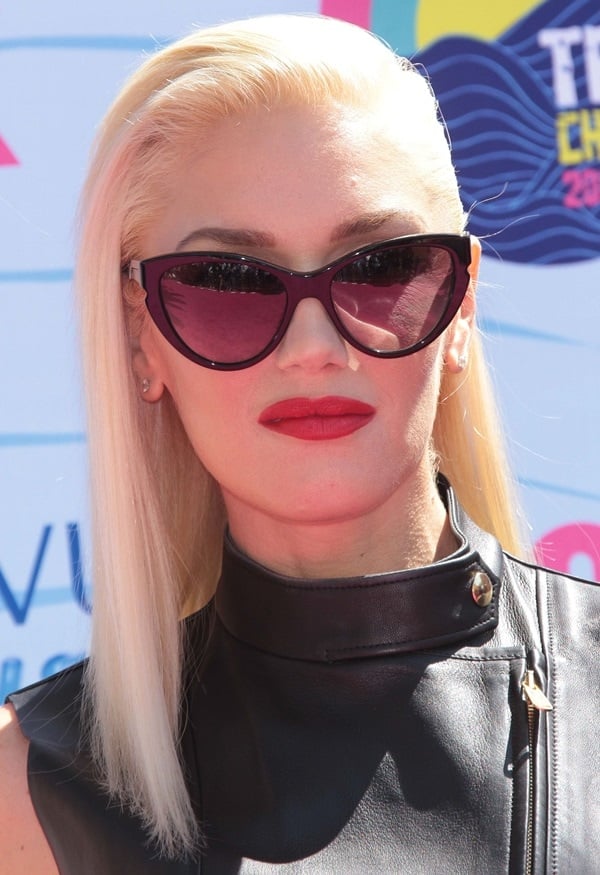 Gwen Stefani wears her blonde hair down at the 2012 Teen Choice Awards held on July 22, 2012, at the Gibson Amphitheatre in Universal City, California (Credit: FayesVision / WENN) 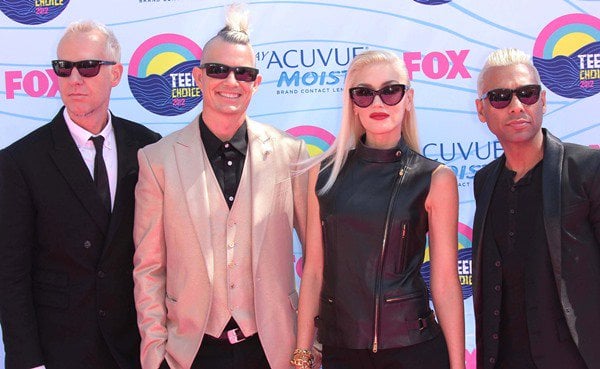 Gwen Stefani poses for photos at the Teen Choice Awards with her band No Doubt (Credit: FayesVision / WENN)

Gwen opted to wear a pair of sleek Christian Louboutin “Lipsinka” pumps on her feet.

She is known for her punk rock meets glam goddess looks, and this outfit was no different. Her metal-heeled Louboutins were equal parts sexy and spicy!

While that price seems a little steep for some of us, these super versatile heels would work with tons of looks from day to night. 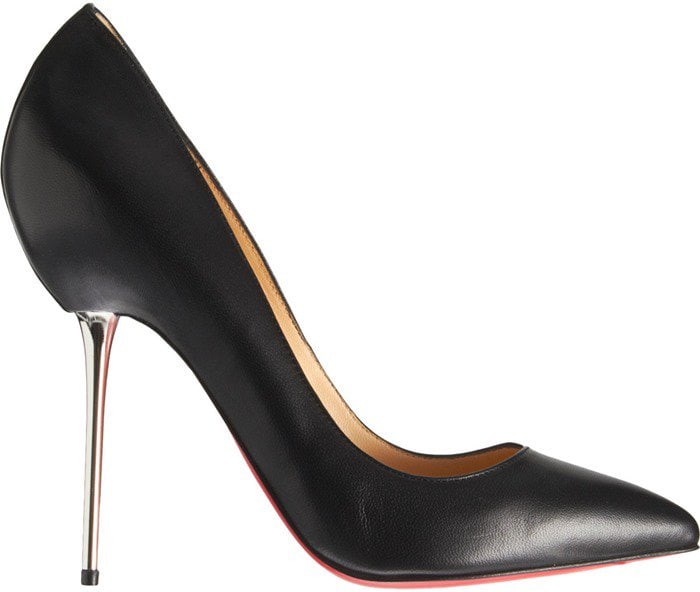 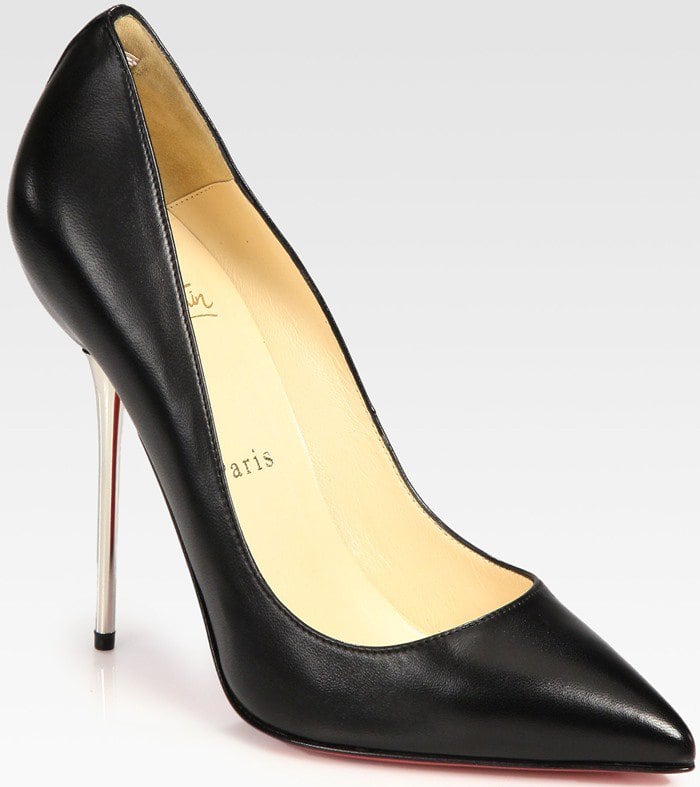 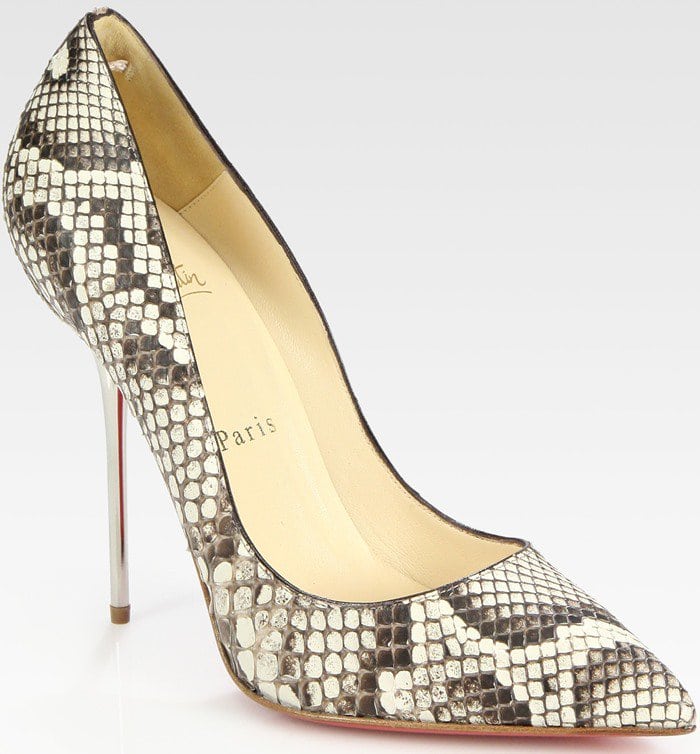