She’s back on the Hollywood scene after a three-year hiatus!

Jennifer Lawrence is leading a blockbuster cast, including Leonardo DiCaprio, Meryl Streep, and Cate Blanchett, in the Netflix comedy Don’t Look Up.

The satirical sci-fi movie is about two low-level astronomers, played by Oscar winners J.Law and Leo, who must go on a giant media tour to warn mankind of a Mount Everest-sized comet on course to destroy planet Earth. 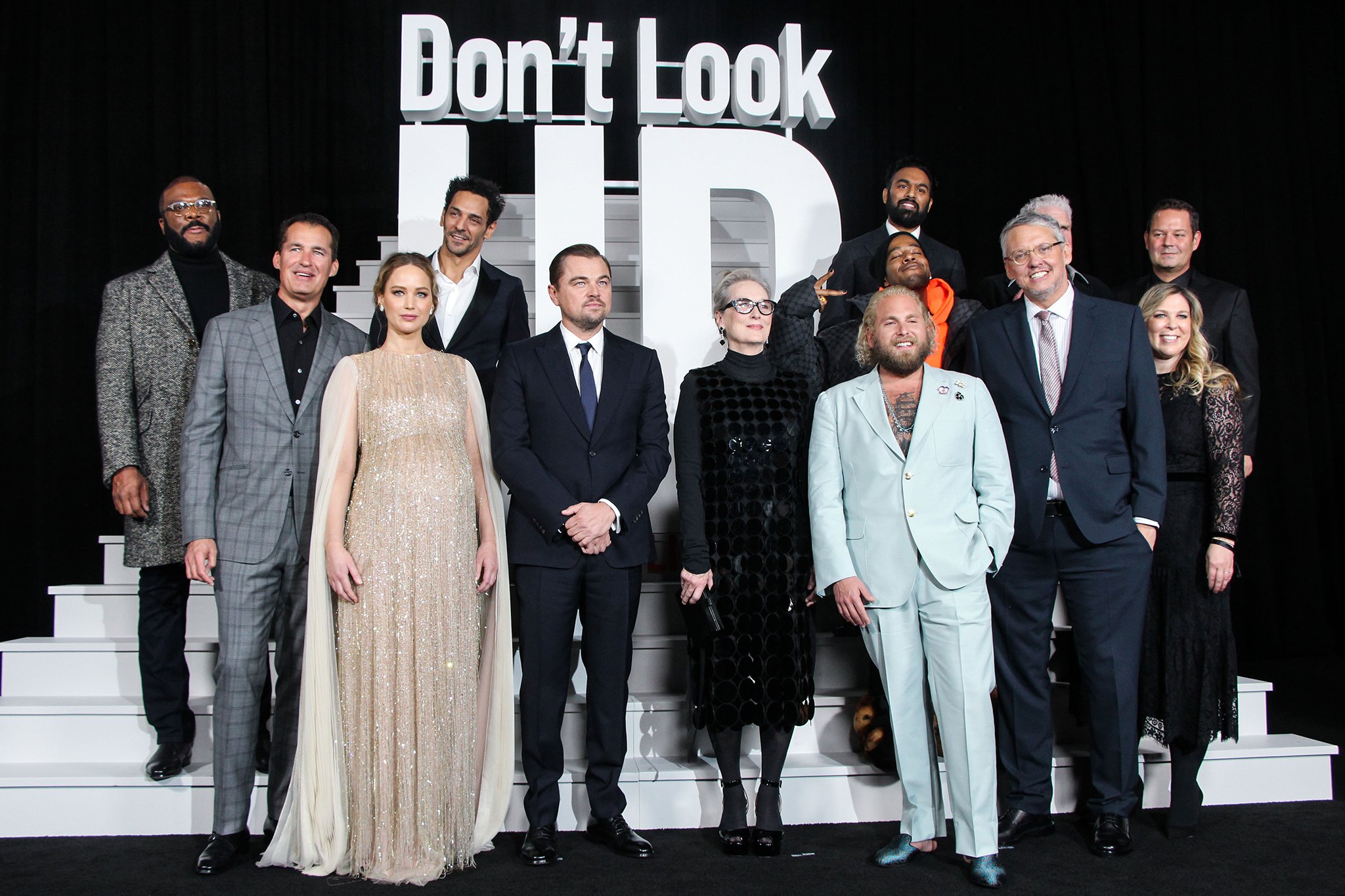 Marking her first major red-carpet appearance in years, the heavily pregnant actress returned to the spotlight for the New York City premiere of Don’t Look Up on Sunday. 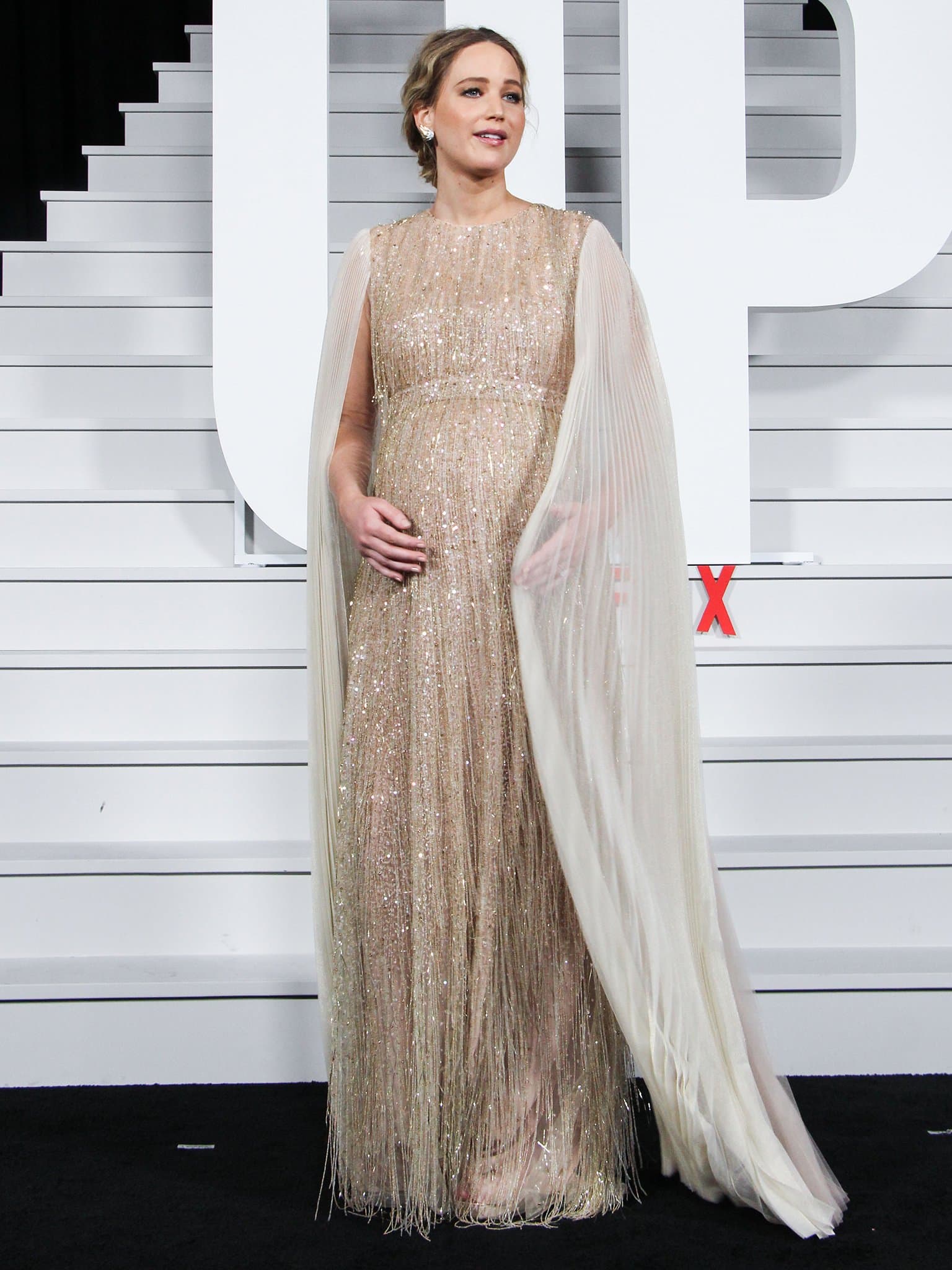 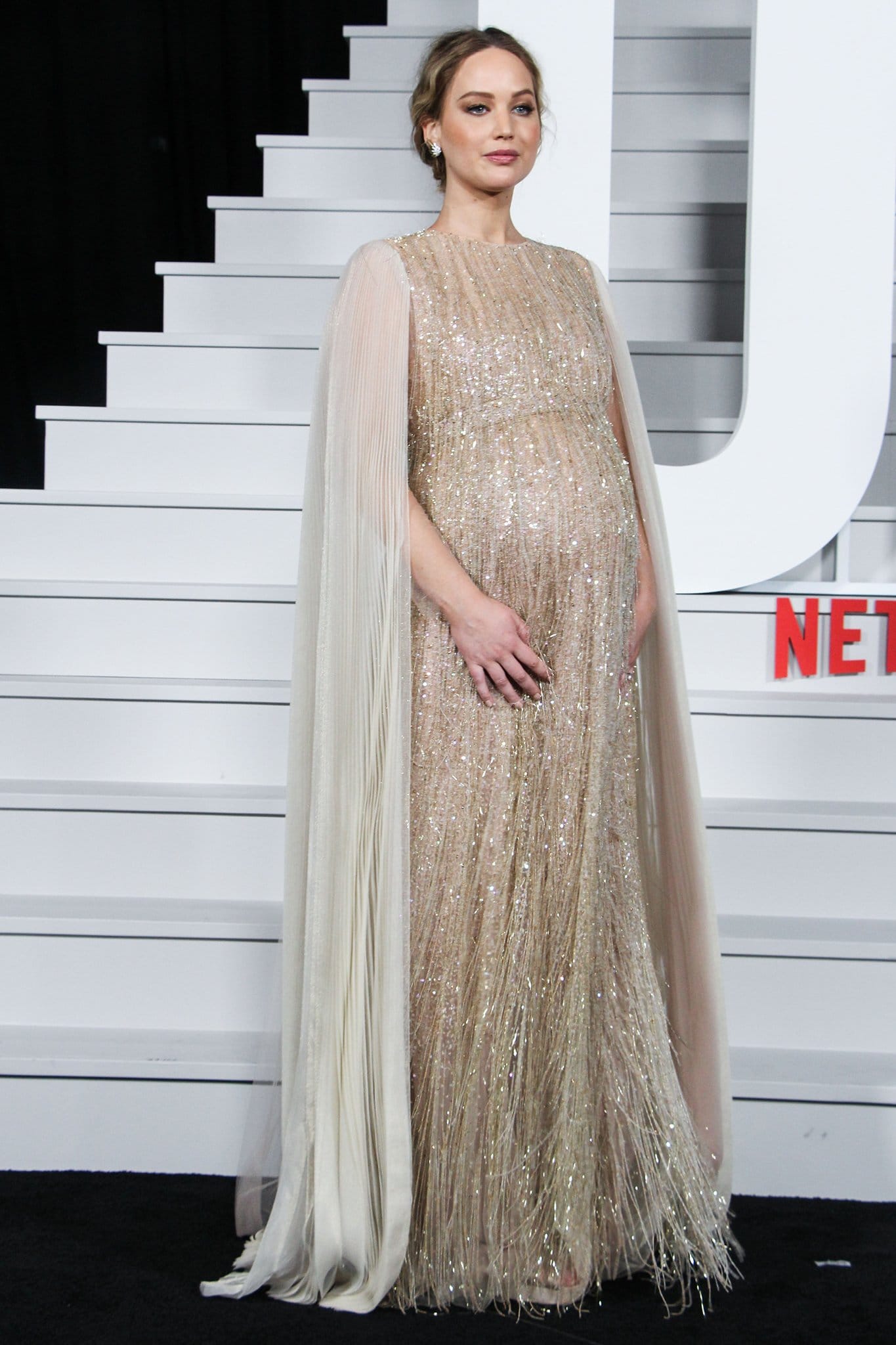 The Hunger Games star posed alongside the Romeo + Juliet actor, who wore a fitted navy suit made of sustainable regenerative wool and a white organic cotton shirt. 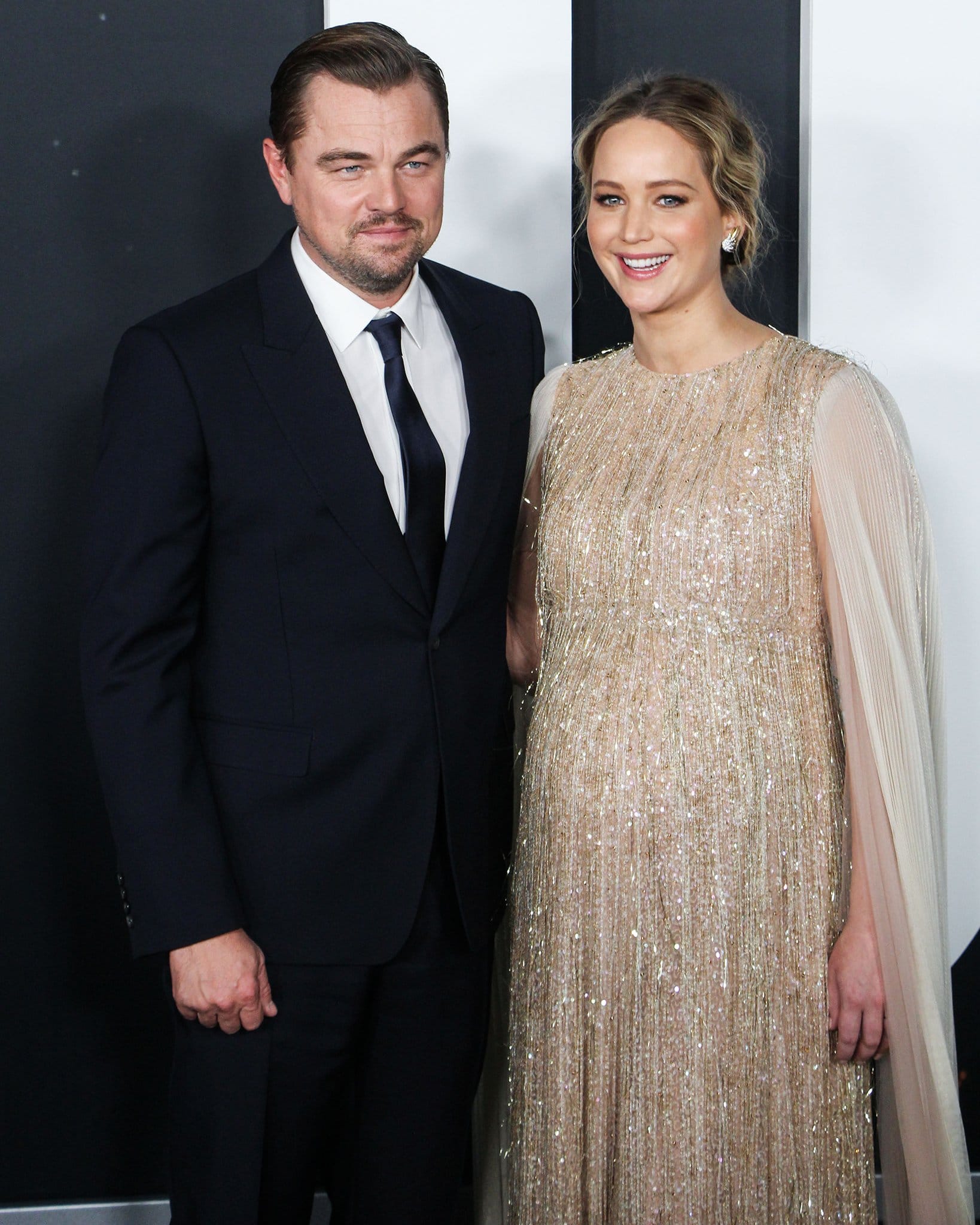 The following day, the X-Men actress made an appearance on The Late Show with Stephen Colbert.

She once again turned heads as she put her burgeoning baby bump on full display in a fitted polka dot dress from Oscar de la Renta.

The bodycon number gives off a retro ‘50s appeal with its low square-cut neckline, puff shoulders, long sleeves, and a knee-length straight hem. 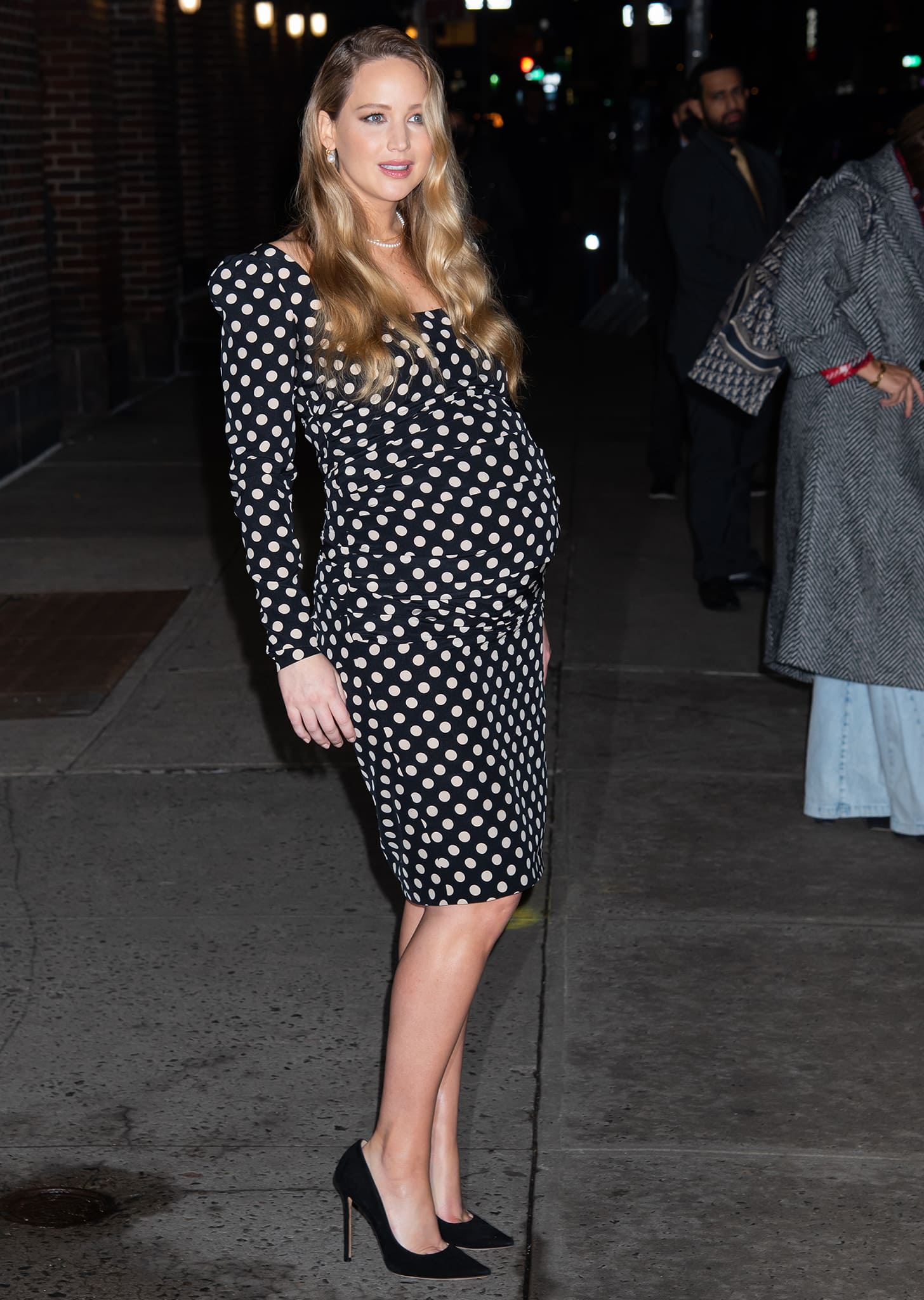 Continuing with the retro theme of her look, J.Law swept her tresses to one side, styled in long, loose waves cascading over her shoulders.

As for her makeup, she wore winged eye-makeup with eyeliner, mascara, a hint of rosy blush, and matching lip gloss. 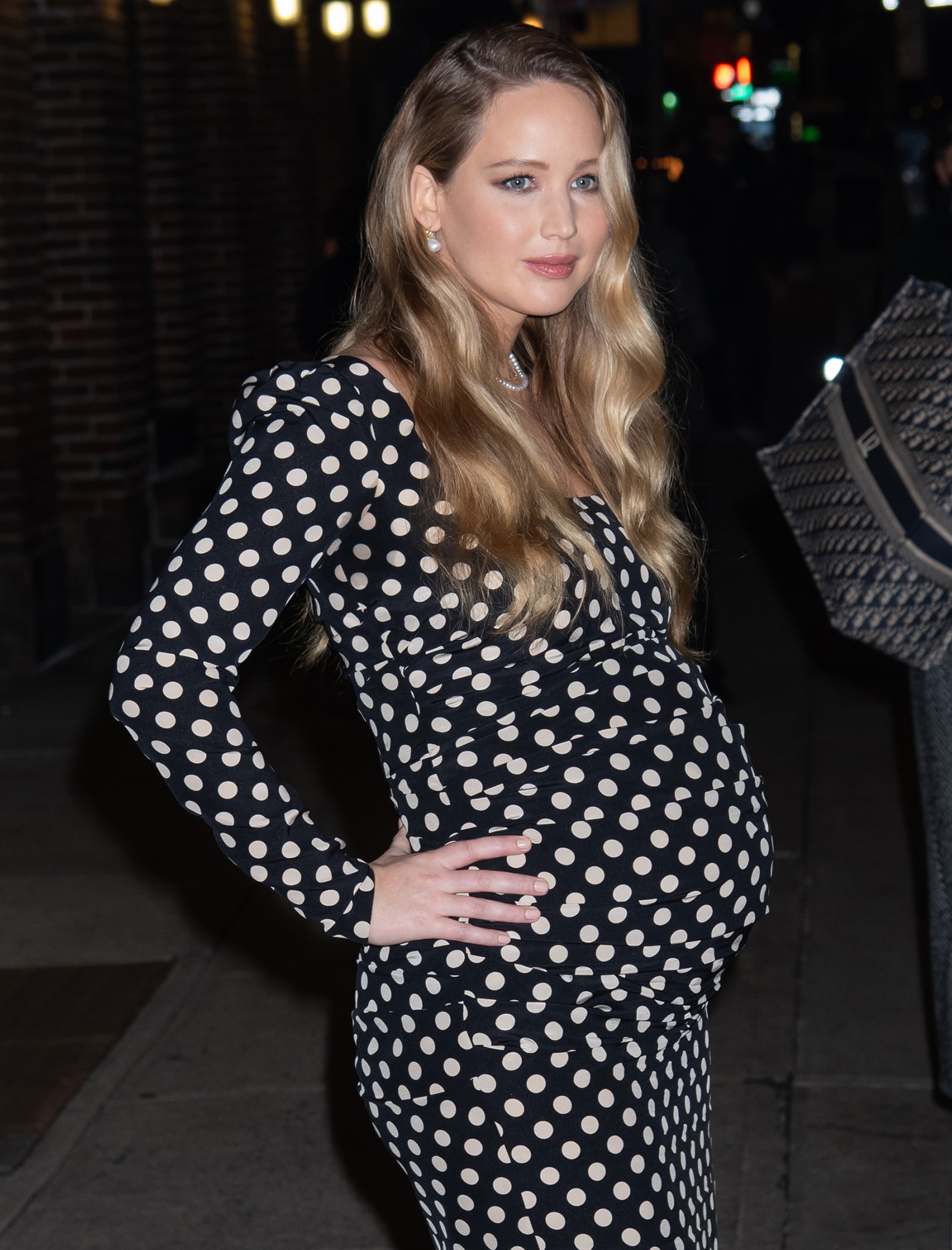 She then finished off her black-and-white outfit with black suede pumps from Gianvito Rossi. 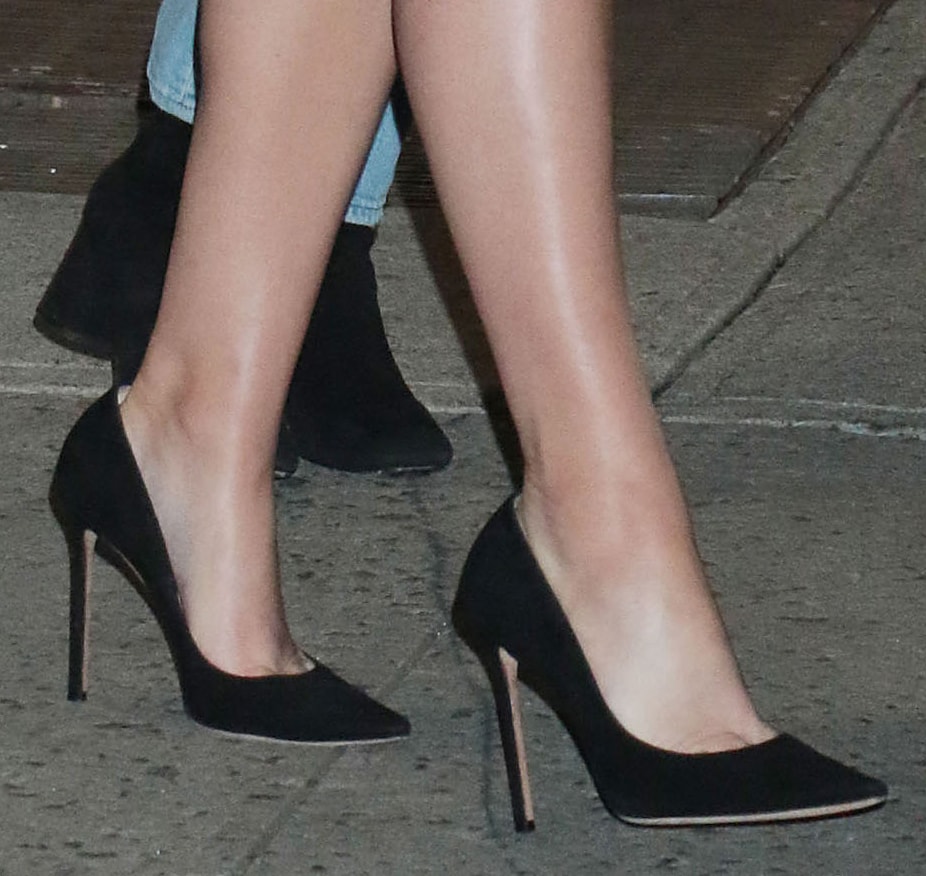 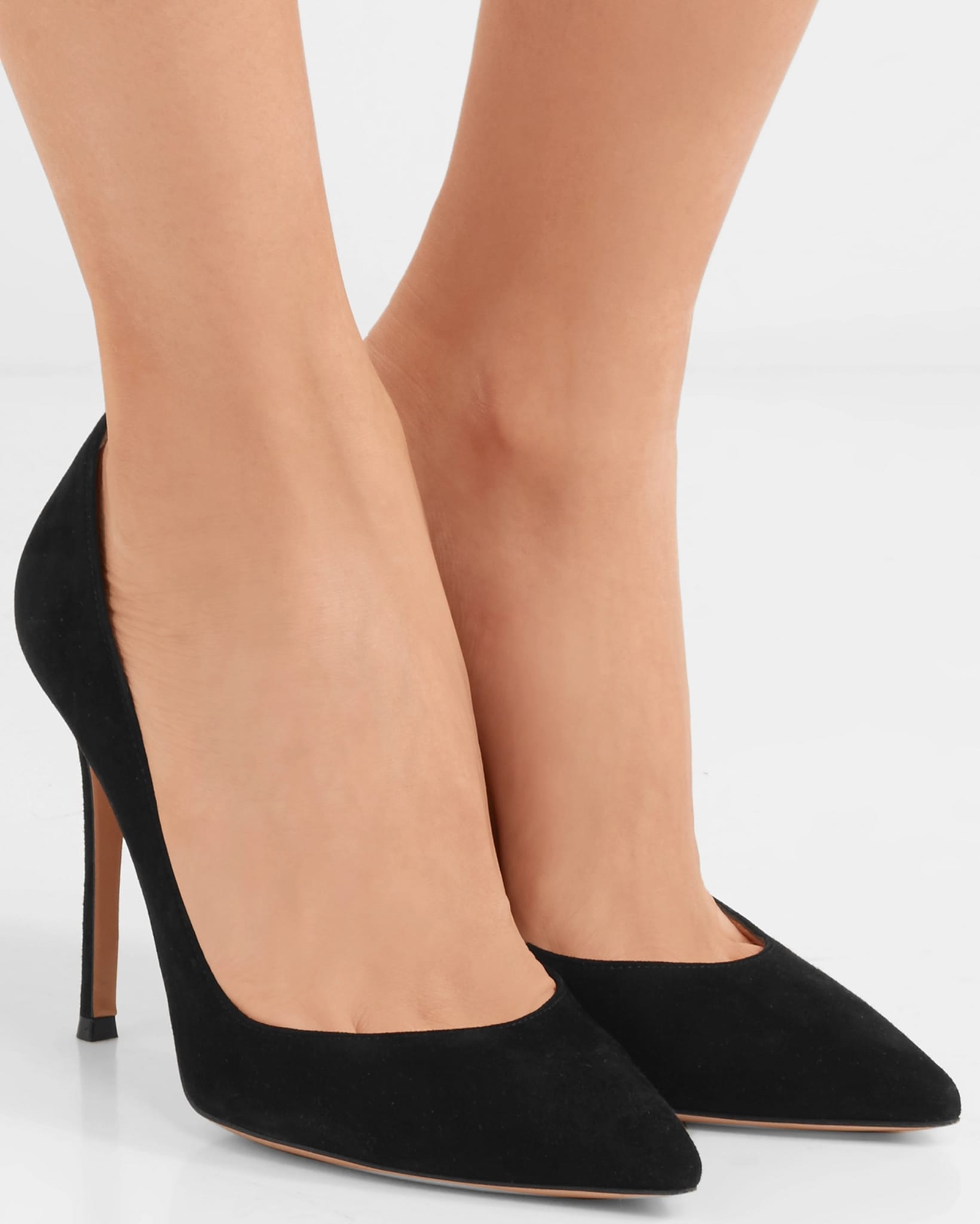 Why Did Jennifer Lawrence Take a Break from Hollywood?

Before taking a break from the limelight, Jennifer Lawrence was considered one of the highest-paid actors in the world. While she showed no signs of slowing down, the actress admitted that she was not making quality films as she should have.

Her last four films, Passengers, Mother!, Red Sparrow, and Dark Phoenix, were met with negative reviews from critics, and the series of underwhelming performances prompted her to take a break from acting.

“I was not pumping out the quality that I should have,” she recently told Vanity Fair. “I just think everybody had gotten sick of me. I’d gotten sick of me. It had just gotten to a point where I couldn’t do anything right. If I walked a red carpet, it was, ‘Why didn’t she run?’… I think that I was people-pleasing for the majority of my life.”

“Working made me feel like nobody could be mad at me: ‘Okay, I said yes, we’re doing it. Nobody’s mad.’ And then I felt like I reached a point where people were not pleased just by my existence. So that kind of shook me out of thinking that work or your career can bring any kind of peace to your soul.”

What Did Jennifer Lawrence Do During Her Hiatus?

In her recent appearance on The Late Show with Stephen Colbert, the host reminded the actress that on her last guesting on the show three years ago, they did six shots of rum.

Stephen then brought up J.Law’s break from acting and asked her about the things she did during her hiatus.

“Did you have fun? What did you do for the last three years?,” Stephen asked, to which Jennifer Lawrence jokingly replied, “I just had a ton of sex,” while laughing and looking down at her belly.

Stephen then shook her hand and said, “Good for you!” J.Law said she was joking and added that she “cooked a little.” “And then the pandemic happened, and then I cooked and I cleaned a lot.”

Jennifer also revealed that if she wasn’t an actress, she would be “a really good housekeeper.” “I make a mess, but I’m really good at cleaning up.”