Global footwear brand Birkenstock has seen a resurgence in popularity over the last few years. Popular styles that many sandal lovers will know include Arizona, Gizeh, Madrid, Boston, and Florida.

According to Forbes, the German company’s global revenue tripled to $870 million between 2012 and 2019. In 2019 alone, the company reportedly sold 24 million pairs of shoes.

Heidi Klum is one of many celebrities who has designed shoes for Birkenstock (Credit: WENN)

In 2017, Footwear News named Birkenstock “Brand of the Year” during its 31st Achievement Awards. In February 2021, Birkenstock was acquired for $4.87 billion by L Catterton, a private equity firm backed by Bernard Arnault’s LVMH.

Although they have been called “ugly sandals,” these thick-strapped, cork-soled sandals have developed a cult following.

Their popularity continues to increase and shows no signs of slowing down. 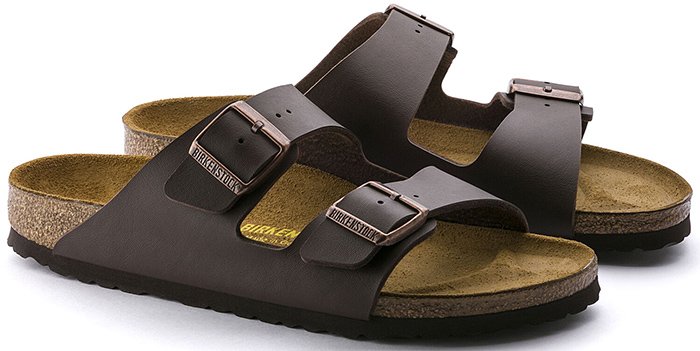 “Birks” first broke onto the high fashion scene in 2012, when Celine’s then-creative director Pheobe Philo sent the brand’s models down the runway in them.

Celine matched its Spring 2013 collection to fur-lined versions of the Birkenstock Arizona sandals, and we haven’t stopped seeing these shoes since.

Below are some celebrity fans of these orthopedic, utilitarian sandals. 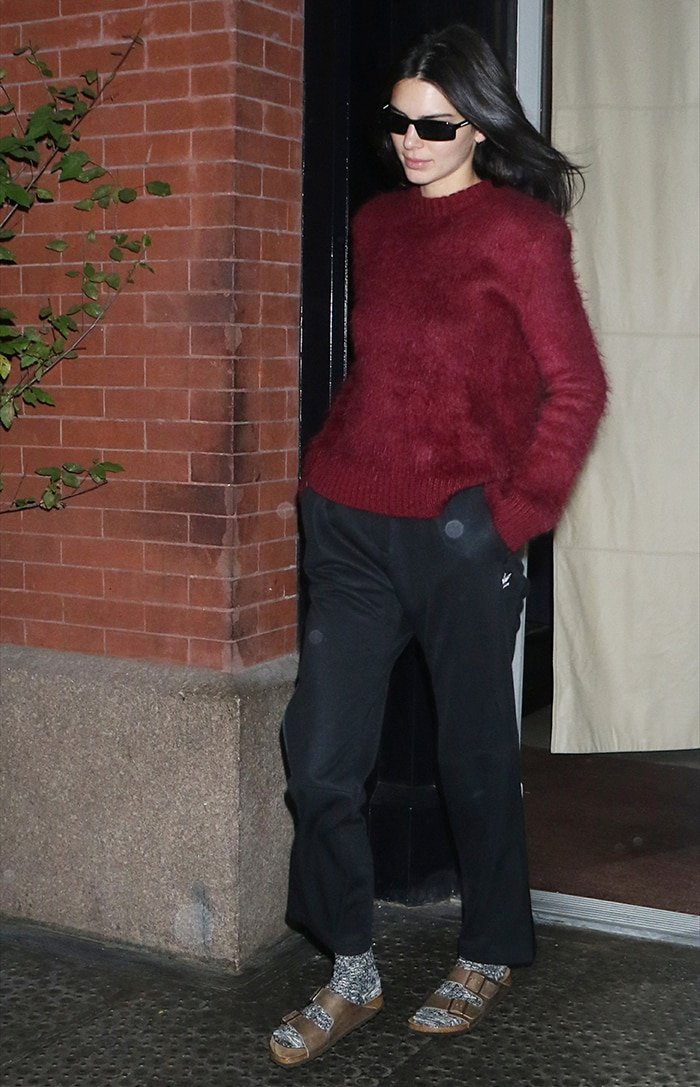 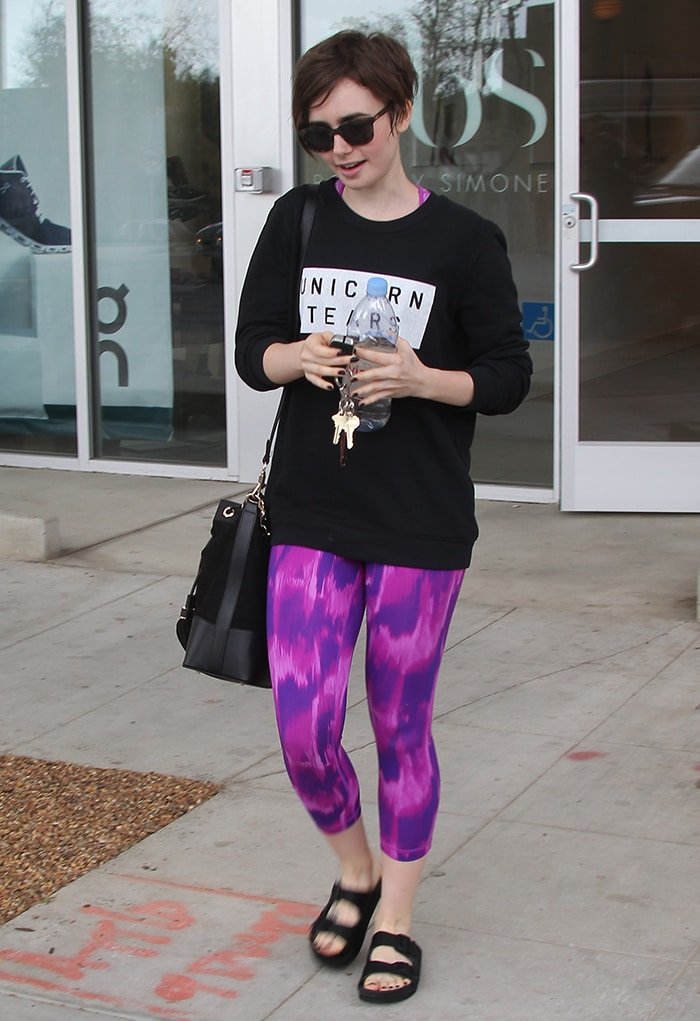 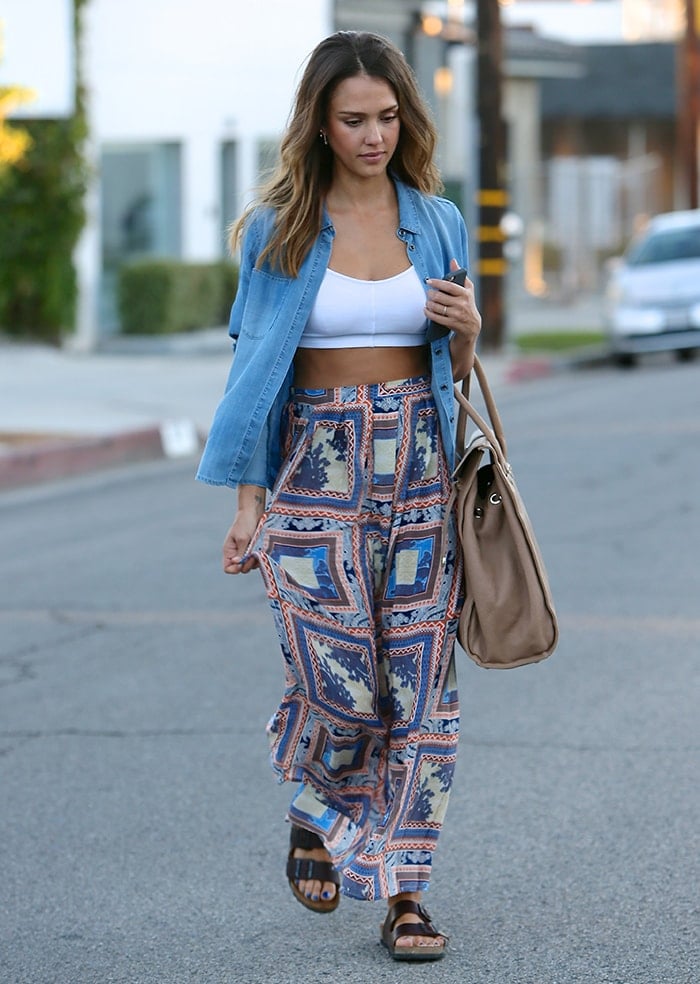 Birkenstock is one of the longest-running footwear companies in the world, with historic roots that can be traced as far back as 1774.

The company later decided to take their original contoured footbeds concept to the next level by creating comfy sandals.

Family-owned from its founding in 1774 until it was acquired in 2021, Birkenstock has stayed true to its “commitment to the art of making orthopedically inspired shoes” for more than two centuries.

Birkenstock prides itself on comfort and quality. The brand follows strict manufacturing standards and makes use of carefully selected, high-quality materials from sustainable sources.

This makes Birkenstock sandals “stand out from the flood of cheap products that dominate large parts of our consumer world today.” 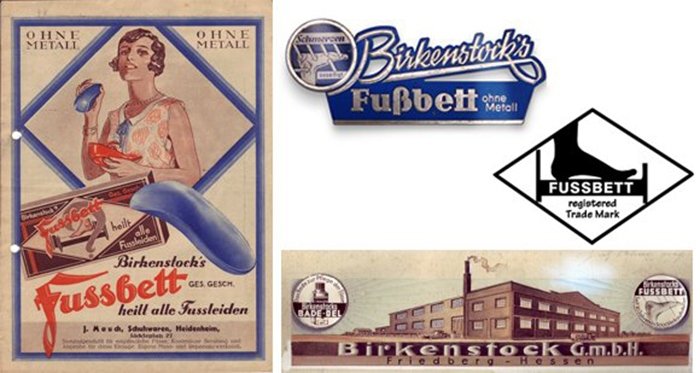 Birkenstock’s blue footbed manufactured at the newly-opened facility in Friedberg, Germany in 1925

Birkenstock is very much aware of the rise of illegal manufacturers producing replicas of its products. In 2016, the company pulled its products from Amazon after counterfeits and unauthorized retailers were discovered.

“The Amazon marketplace, which operates as an open market, creates an environment where we experience unacceptable business practices which we believe jeopardize our brand,” said Birkenstock US CEO David Khan in a letter obtained by CNBC. “This includes postings by sellers proven to have counterfeit Birkenstock products.”

Despite taking action against counterfeiters, there are still a lot of knock-off companies and distributors that sell fake Birkenstocks these days. You can sometimes also find Birkenstock sandals at Costco, though the company isn’t happy about that.

Fortunately, there are several ways to identify authentic Birkenstock shoes. Check them out below:

One sure way to avoid falling victim to scammers is to purchase directly from Birkenstock’s official website or through authorized dealers. You can check out the store locator provided by the shoe manufacturer headquartered in Neustadt, Germany.

You can also buy from reputable websites and established retailers like Zappos, Nordstrom, Saks Fifth Avenue, and Farfetch. Discounted styles can be purchased on sale at Nordstrom Rack.

Original Birkenstock sandals are usually priced between $29.95 and $99.95 for classic styles, depending on the material.

One of the most copied Birkenstock styles is Arizona. The EVA version can be purchased for $44.95, while other versions retail for $99.95. 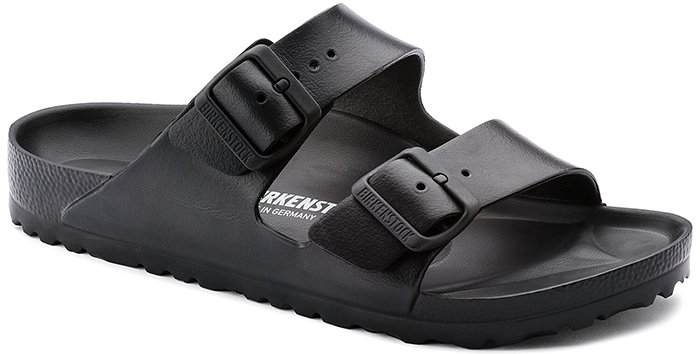 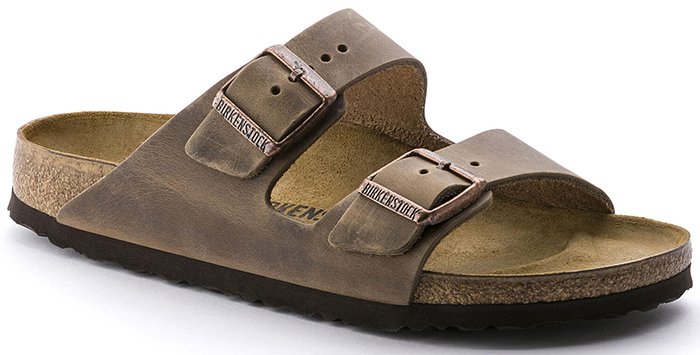 The company also has limited collections, including one titled Metallic Stones, which retail from $99.95 to $110. 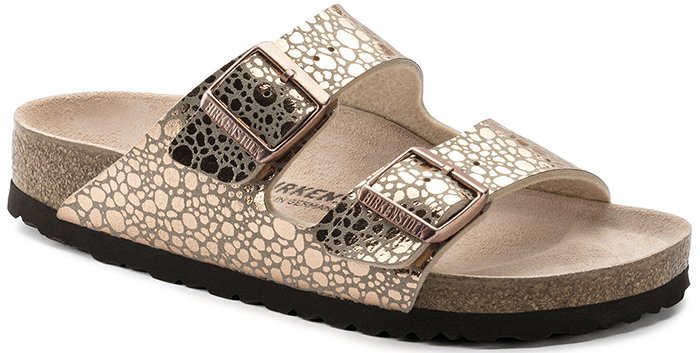 The more high-end versions, which are made from premium leather, suede, cowhide, and microfiber materials, are priced between $120 and $300. 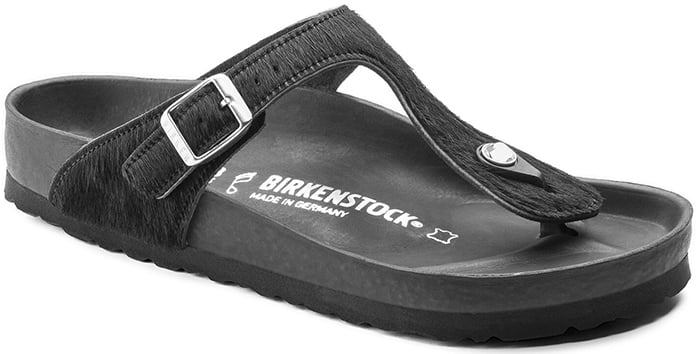 Their Valentino collaboration sandals are priced at $495 for the black-and-white logo version and $460 for the red version.

Birks are quite pricey, so if you see a store selling them at prices that are too good to be true, chances are pretty high that they’re fake.

The shoes should come in a blue Birkenstock shoebox properly labeled with the BIRKENSTOCK text logo on all sides, except for the bottom. There should also be a circular logo on top that carries over onto the backside of the box. 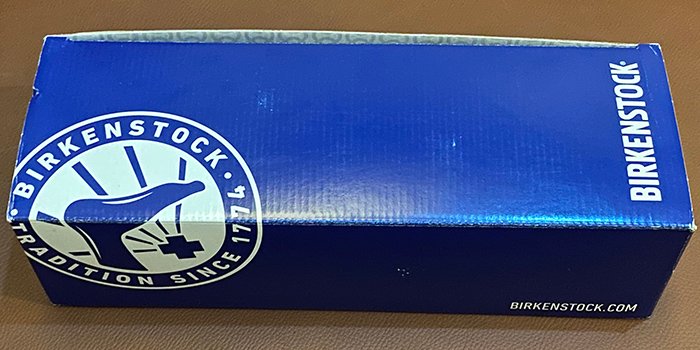 The original Birkenstock box should be properly labeled with logos

The front part should display an illustration of Birkenstock shoe styles with their respective names printed below each style.

A paragraph about Birkenstock should be printed in both German and English on one side of the box. 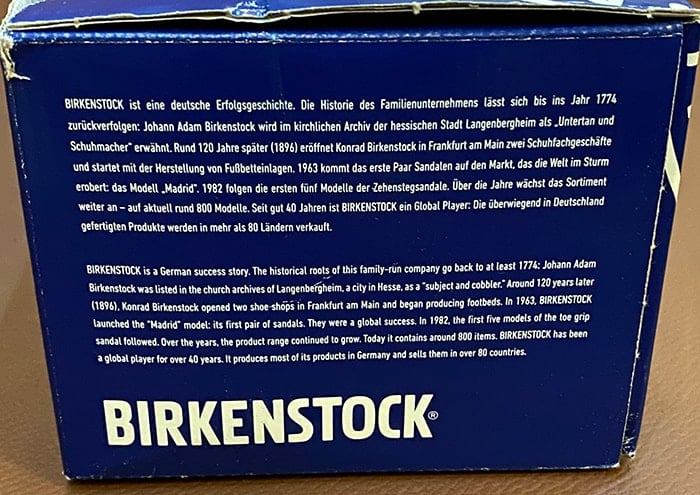 On the opposite side, there should be a sticker label showing an illustration of the shoe style, the model name, color, material as well as your shoe size and foot width.

This information should match the shoe inside the box. The sticker label should also include a product code and EAN/UPC barcodes. 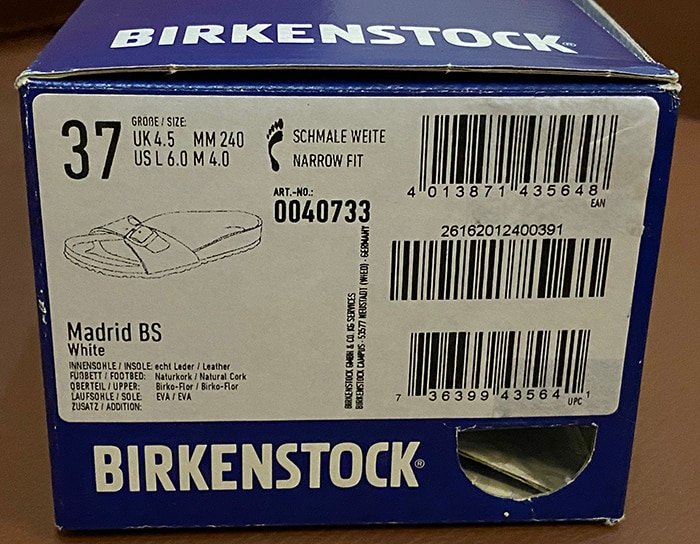 When opened, there should be text reading “TRADITION SINCE 1774” on the inside of the box lid. The interior should be printed with Birkenstock’s sole design and should have a size guide on the cover. 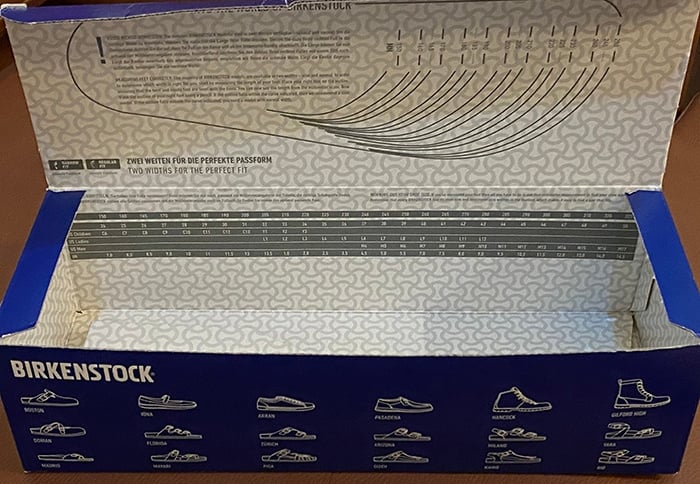 The packaging must come with a white logo-printed tissue wrapping and a tag indicating the material of the shoe.

The footbed is perhaps the most important part of checking the authenticity of Birkenstock shoes.

Dubbed as the “heart” of all Birkenstock shoe models, the footbed should have a suede lining, a deep heel cup for natural cushioning under the heel bone, longitudinal and transverse arch support, and a raised toe bar. 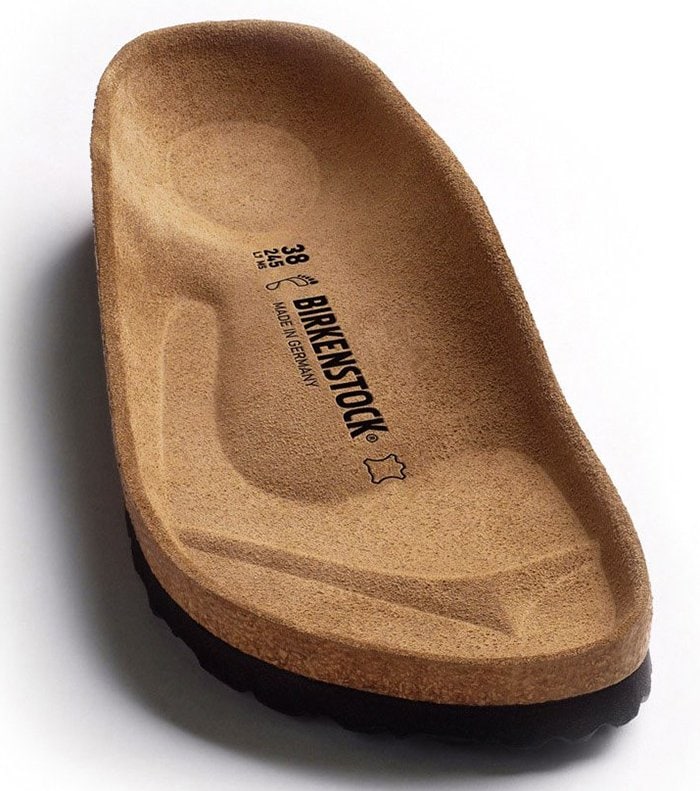 The Birkenstock text logo should be imprinted on the footbed of each shoe. It should also feature the words “MADE IN GERMANY” just below the logo.

You should see the shoe size and the footprint symbol on the left side of the logo, while the leather icon should be on the right.

The footbed should have an imprint showing the logo, the shoe size, a footprint symbol, and a leather icon

These imprints come in black, except for older Birks, which are in yellow. Vegan Birks also have green imprints, while limited edition Birks have silver or gold. For Soft Footbed versions, the imprint is done in blue. 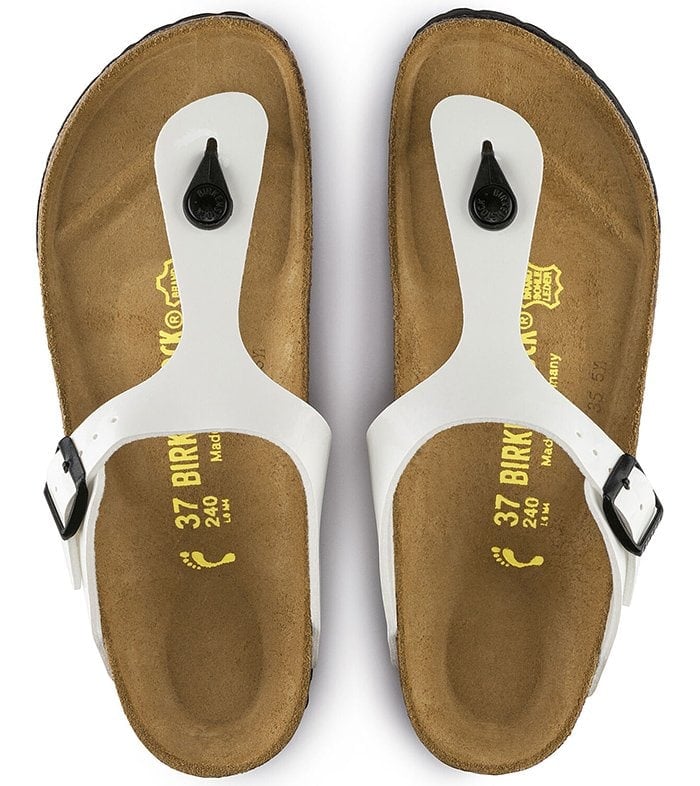 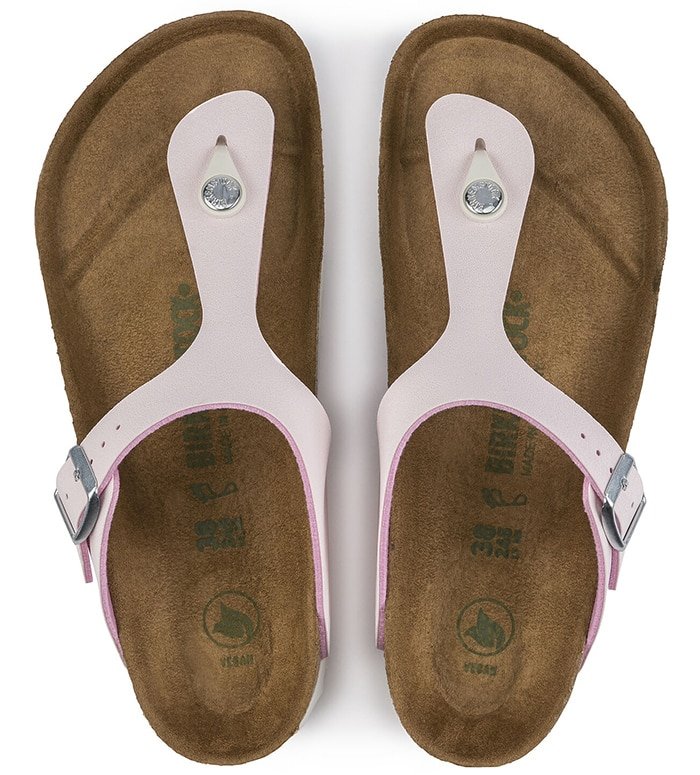 Imprints on vegan Birkenstocks are inked in green 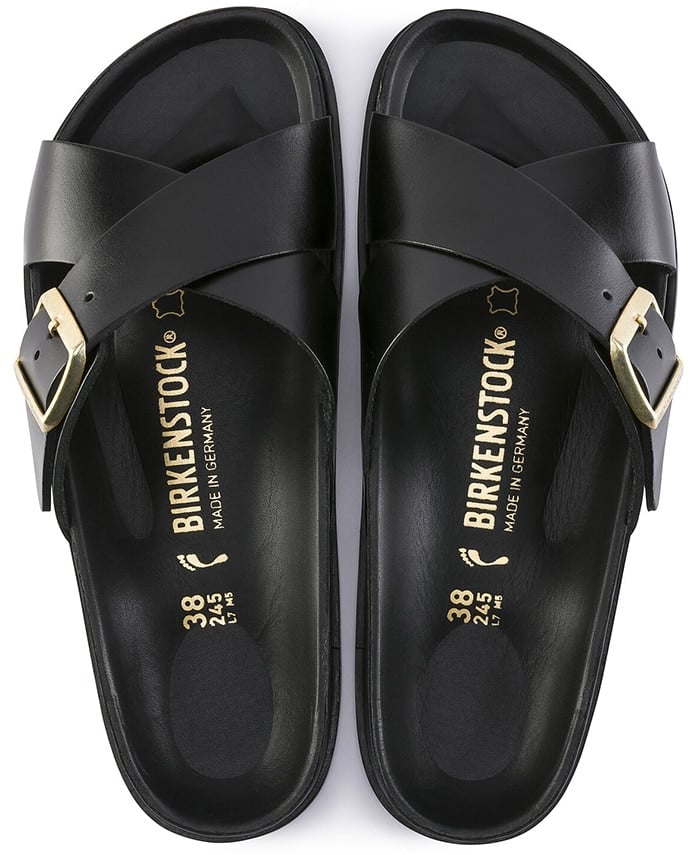 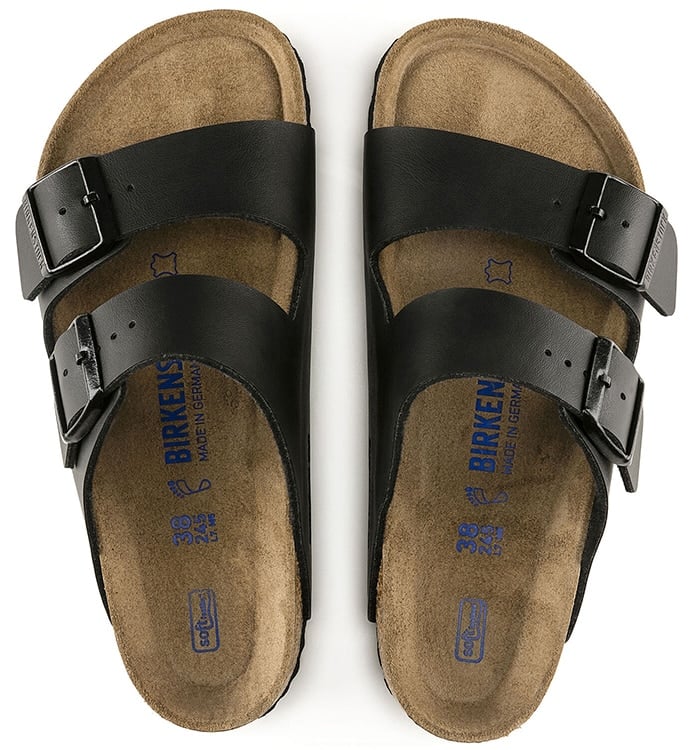 Imprints on Soft Footbed versions are done in blue

The EVA models should also have the same information on the footbed, except for the leather icon imprint. Its footbed should also be made from EVA, not suede. 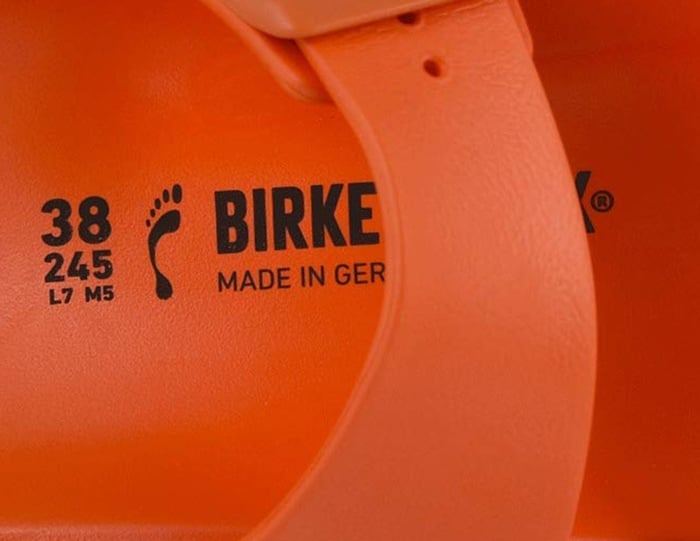 The footbed of a Birkenstock sandal EVA

On models with shearling lining, there should be a tag showing the same information, including the text logo, the foot symbol, and the shoe size. 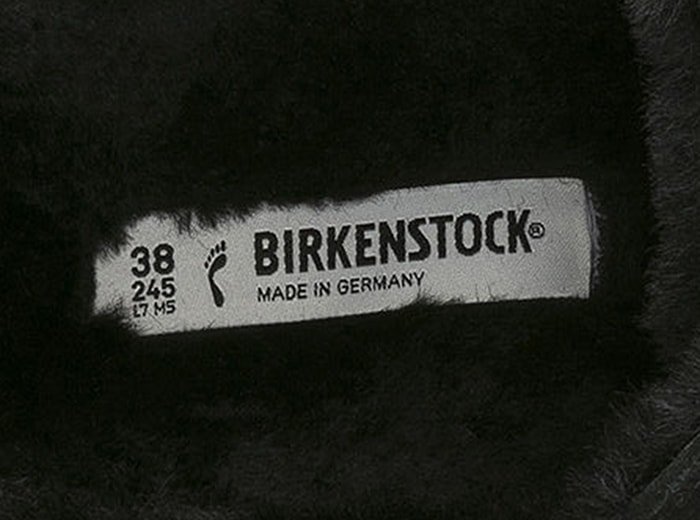 The footbed of a fur-lined Birkenstock sandal

Make sure that the texts are spelled correctly and are neatly done.

Birkenstock soles are patented and they feature the brand’s unique hourglass-shape pattern. There should also be the word “Birk” debossed on some of the shapes on the soles.

The premium versions may have different sole designs. 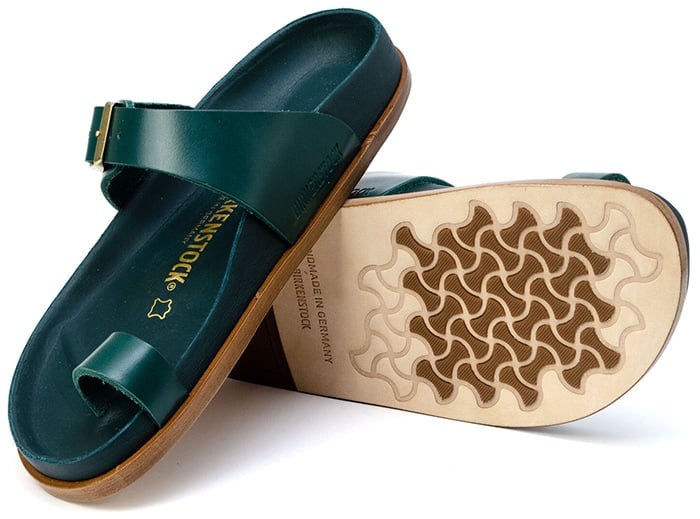 There should be a BIRKENSTOCK debossed logo on the inner side of the strap of each shoe. You should feel the imprint across the logo when you run your fingers over it. It should be straight and neatly done.

7. Check the buckles and buttons

The buckles and buttons on every original Birkenstock shoe should have a debossed text logo.

On larger buckles, you should see the word “BIRKENSTOCK.” 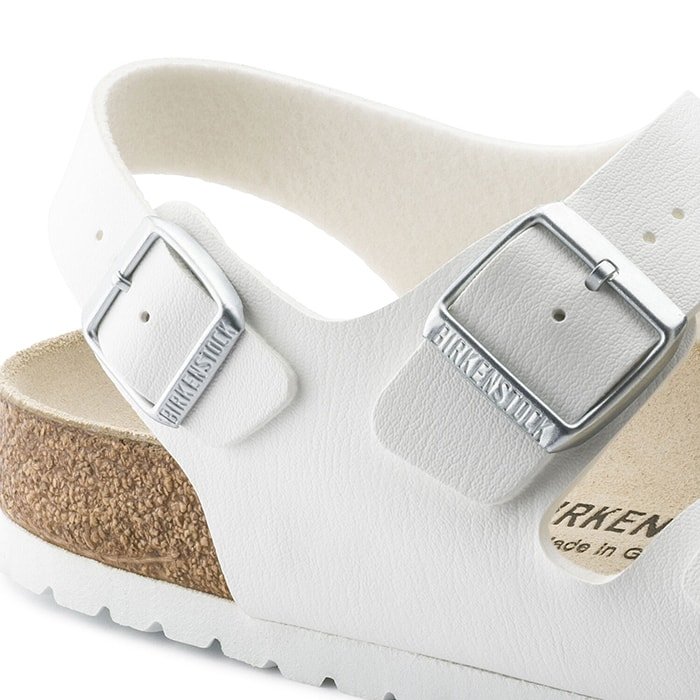 Sandals with large buckles have a “BIRKENSTOCK” debossed logo

On smaller buckles, you should see either “BIRKEN” or “BIRK.” 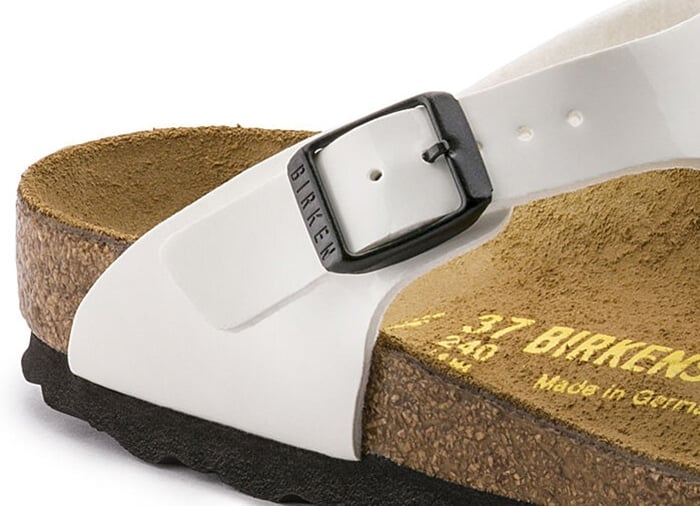 Styles like the ‘Gizeh’ show shortened text logos on the buckle 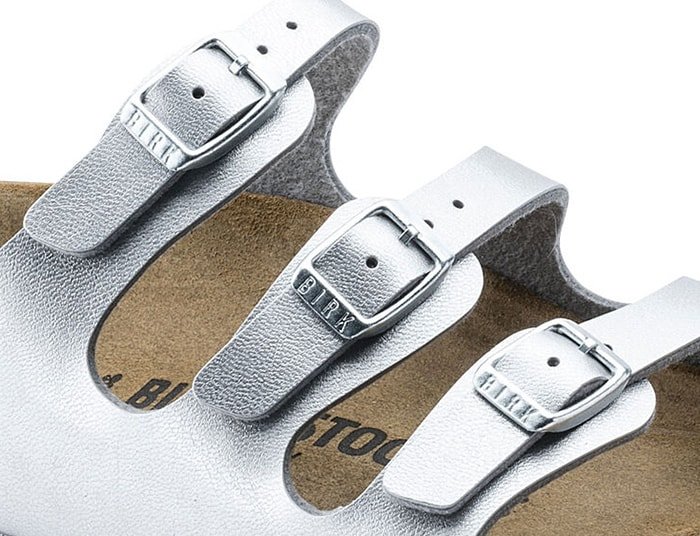 Fake Birks are usually made from thin leather or poor-quality materials without fleece lining.

Birkenstocks are made for comfort, so they should be lightweight. Fake Birks are usually heavier than authentic ones.

Authentic Birkenstocks adhere to strict manufacturing standards and are guaranteed to be of top quality.

The outsole, cork, and footbed should be neatly aligned, and there should be no excess clumps of glue anywhere.