The shortest in her class when she was 14, the tall 26-year-old English singer, songwriter, and model Dua Lipa wore a simple and elegant look to The Fashion Awards 2021 in London, England.

Dua Lipa in a Maximilian dress and Tiffany & Co. jewelry on the red carpet at The Fashion Awards 2021 on November 29, 2021, at Royal Albert Hall in London, England (Credit: Avalon / WENN)

She paired the black corseted crepe Maximilian gown with her center-parted long dark hair in very loose waves along with Tiffany & Co. jewelry.

While the look was very simple, it was also timeless and, in our opinion, does not land her in either the best or worst-dressed categories at this event.

“I’m not 5ft10!!! Where did this come from?? I’m 5ft8,” she said about her height when asked by a fan on Twitter. According to Clash Music, she was really short as a child and took up basketball to try and make her taller. 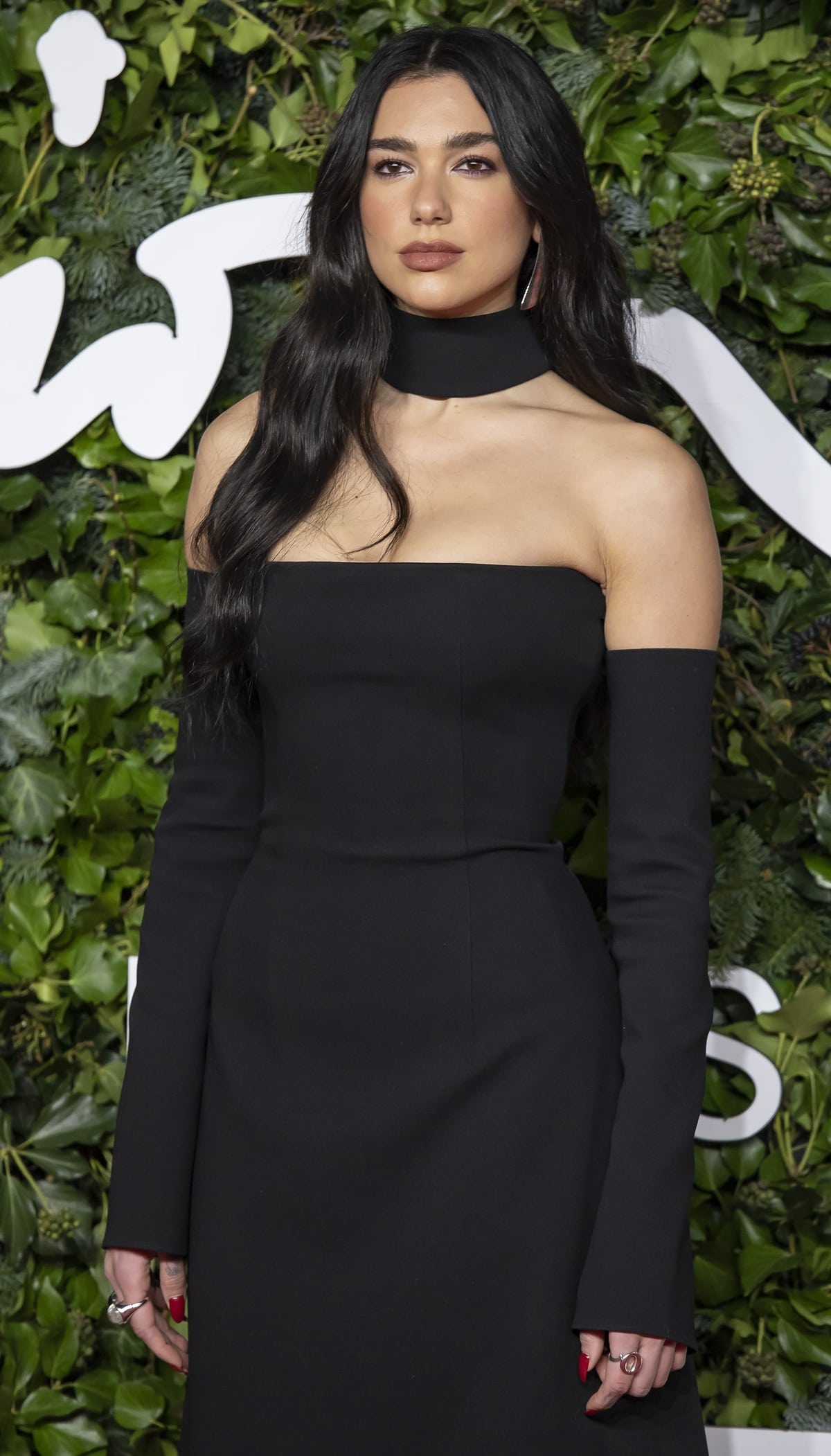 “I thought it would help me grow but it didn’t,” she said in an interview with Billboard about her failed attempt to boost her height by playing basketball.

“The second I quit, I did grow,” she said about quitting basketball as she got bored. Her impressive growth spurt started at 16.

Now much taller than the average woman, she even walked the runway in the Versace show during Milan Fashion Week in Milan, Italy. 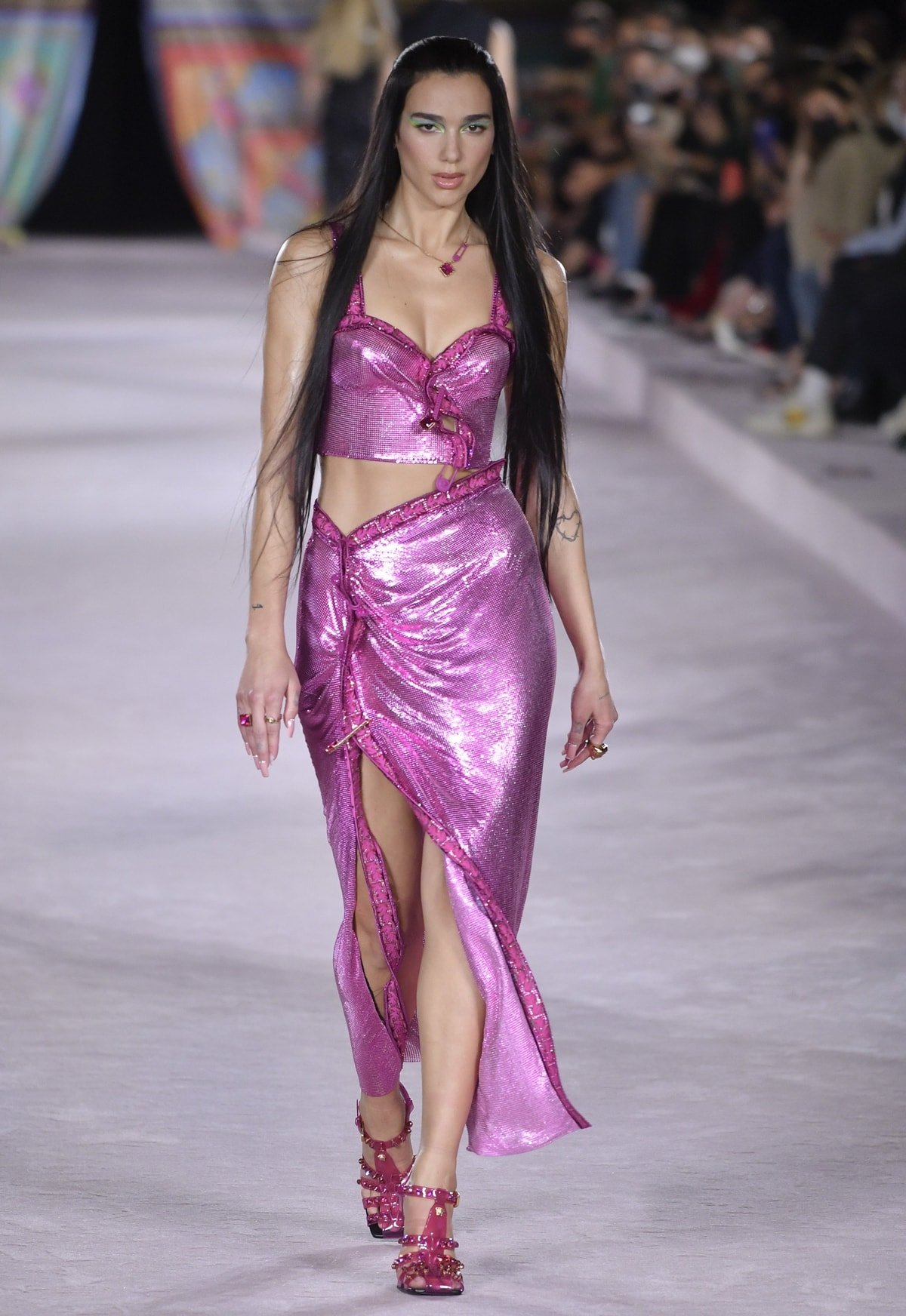 Dua Lipa made her runway debut in the Versace show during Milan Fashion Week on September 24, 2021, in Milan, Italy (Credit: MEGA / WENN)

In May 2021, she bagged not one but two major awards at the 2021 Brit Awards held at The O2 in London. Dua Lipa cemented her status as one of the most notable pop stars in the country after taking home her second Female Solo Artist award—an award she first won in 2018. 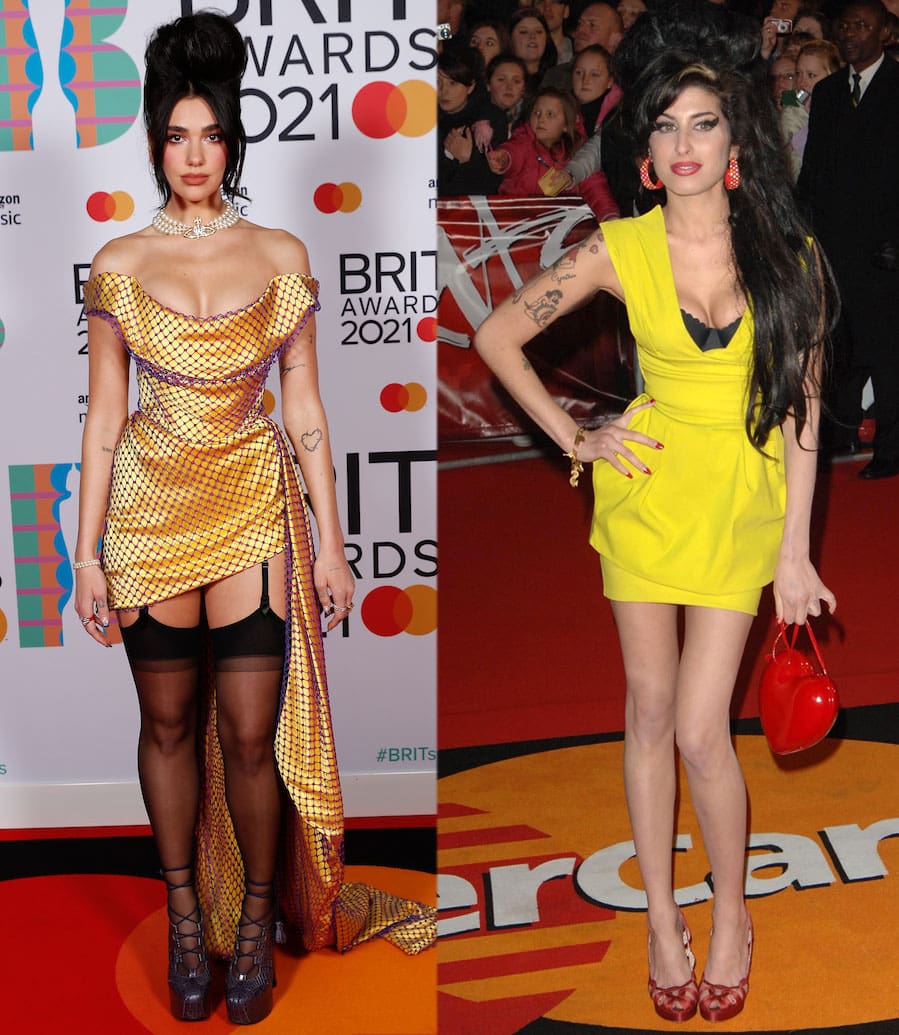 For the occasion, the then 25-year-old singer paid homage to two of British music’s pop icons Geri Halliwell and the late Amy Winehouse. She turned 26 on August 22, 2021.

Showing off her legs and cleavage, Anwar Hadid’s girlfriend wore a custom Vivienne Westwood corset dress that features an off-the-shoulder style and a deep plunging neckline.

The satin frock also has a purple net overlay and a dramatic train that falls from her cinched waist. 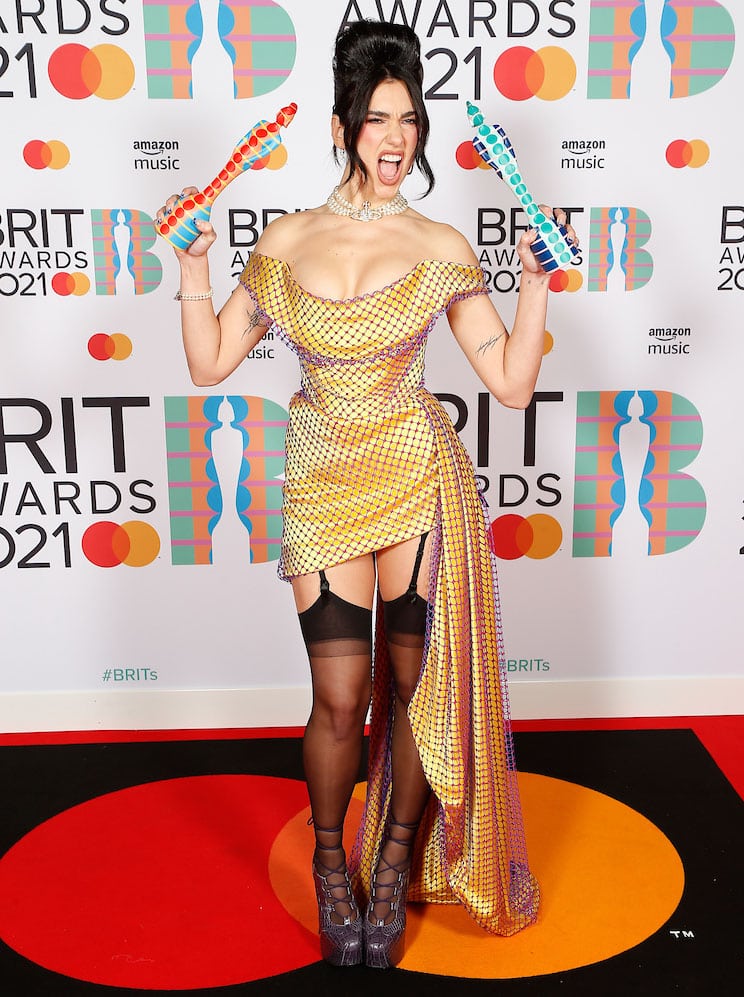 Dua wore her raven tresses up into a beehive hairdo with few tendrils framing her glammed-up face.

She did not skimp on the accessories and wore a three-row pearl Bas Relief choker necklace, a pearl bracelet, and a pair of Grace Bas Relief earrings, all of which from Vivienne Westwood.

She also accessorized with a Union Jack ring from Hotlips by Solange, a David Yurman Streamline Signet ring, and a Spinelli Kilcollin 18K Rose and Yellow Gold Aurora 3 Link ring. 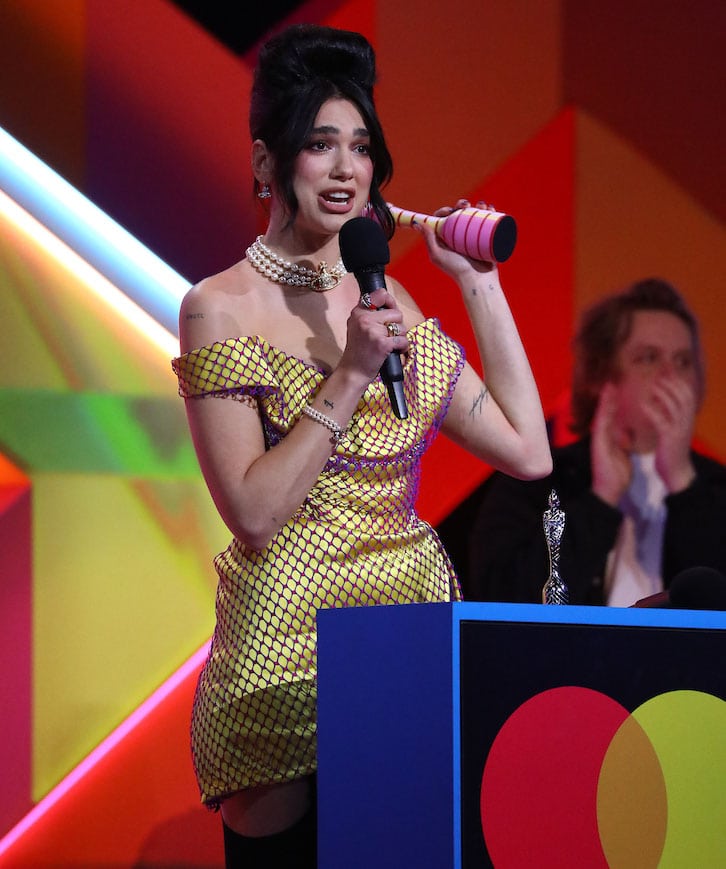 Adding a racy touch to the look, Dua wore black stockings with suspenders and slipped into a pair of Vivienne Westwood Elevated Ghillie purple platform shoes.

The original version of these sky-high shoes was first seen on Naomi Campbell during the label’s fall 1993 fashion presentation.

It was named the Super Elevated Ghillie because of its 9-inch Louis heel and 4-inch platform, which caused Naomi’s inevitable fall on the runway. 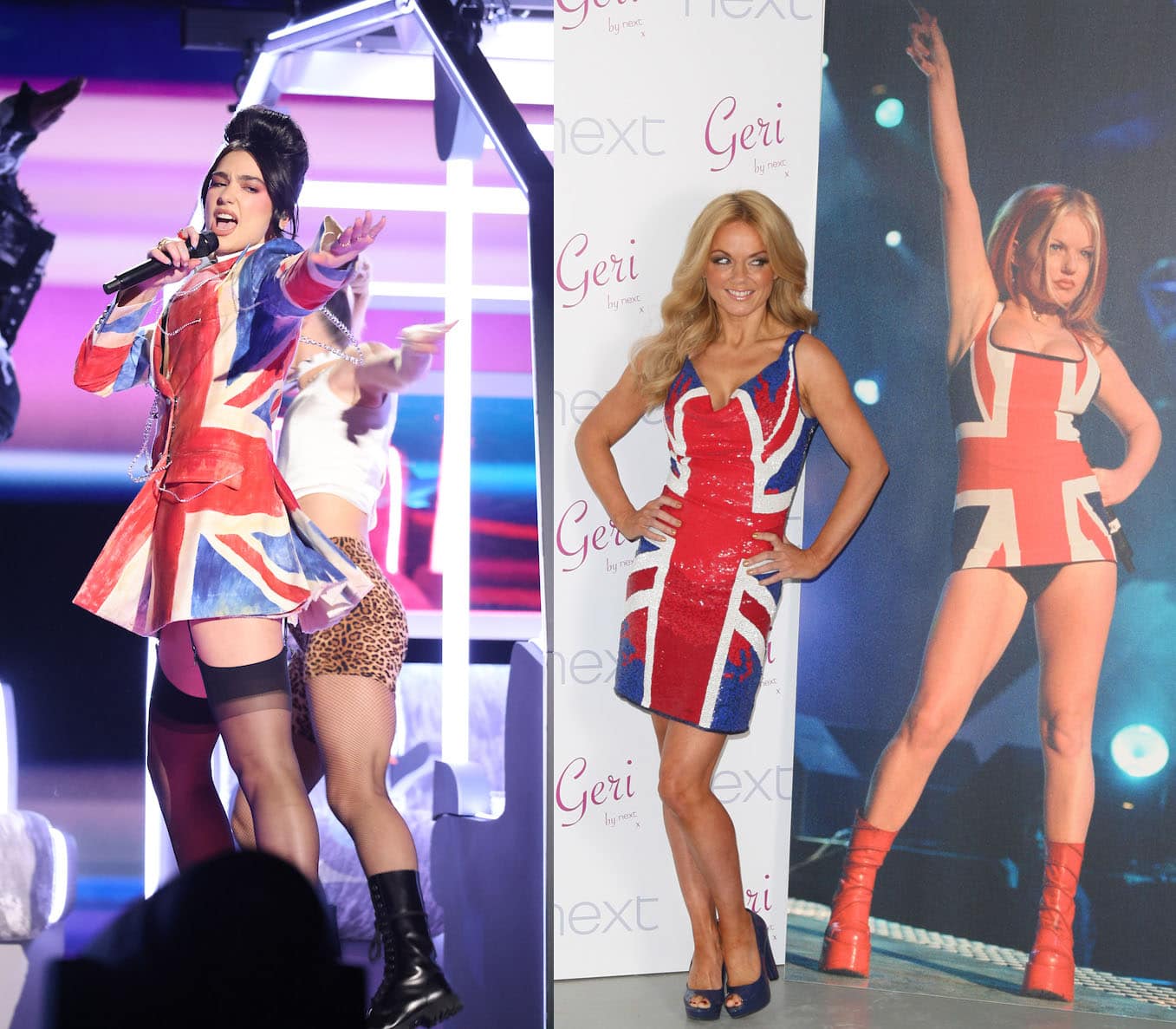 Her Vivienne Westwood custom outfit included a Union Jack mini skirt and a matching blazer, which she later removed to show her white long-sleeved shirt, black cravat, and gold corset.

She wore the same accessories but traded her purple platforms for a pair of three-strap black patent heels. 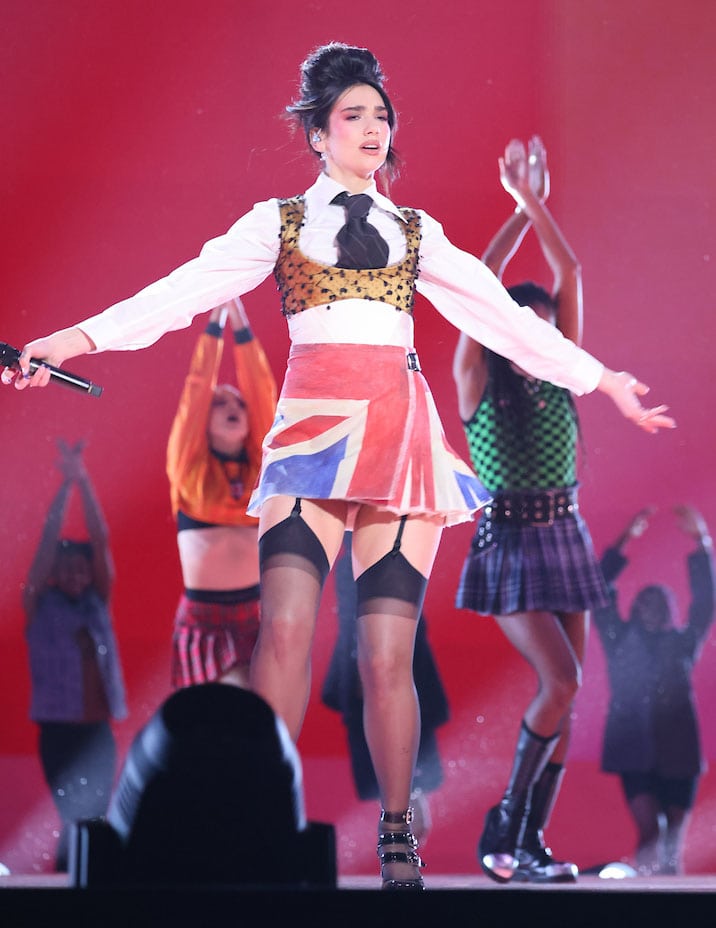