She may not “give a sh*t” about getting an Oscar buzz for her performance in Spencer, but Kristen Stewart is already bagging win after win on the awards show circuit.

She was presented with the Spotlight Award for Spencer at the Palm Springs International Film Awards last month, followed by a Best Actress Award at the 2021 Sunset Circle Awards.

More recently, Kristen Stewart was honored at the 2021 Gotham Awards with the Performer Tribute honor, presented to her by her Still Alice co-star Julianne Moore.

Showcasing her slender frame and arm tattoos, the feminine number features a simple yet classy design, with a cinched waist and a maxi skirt. 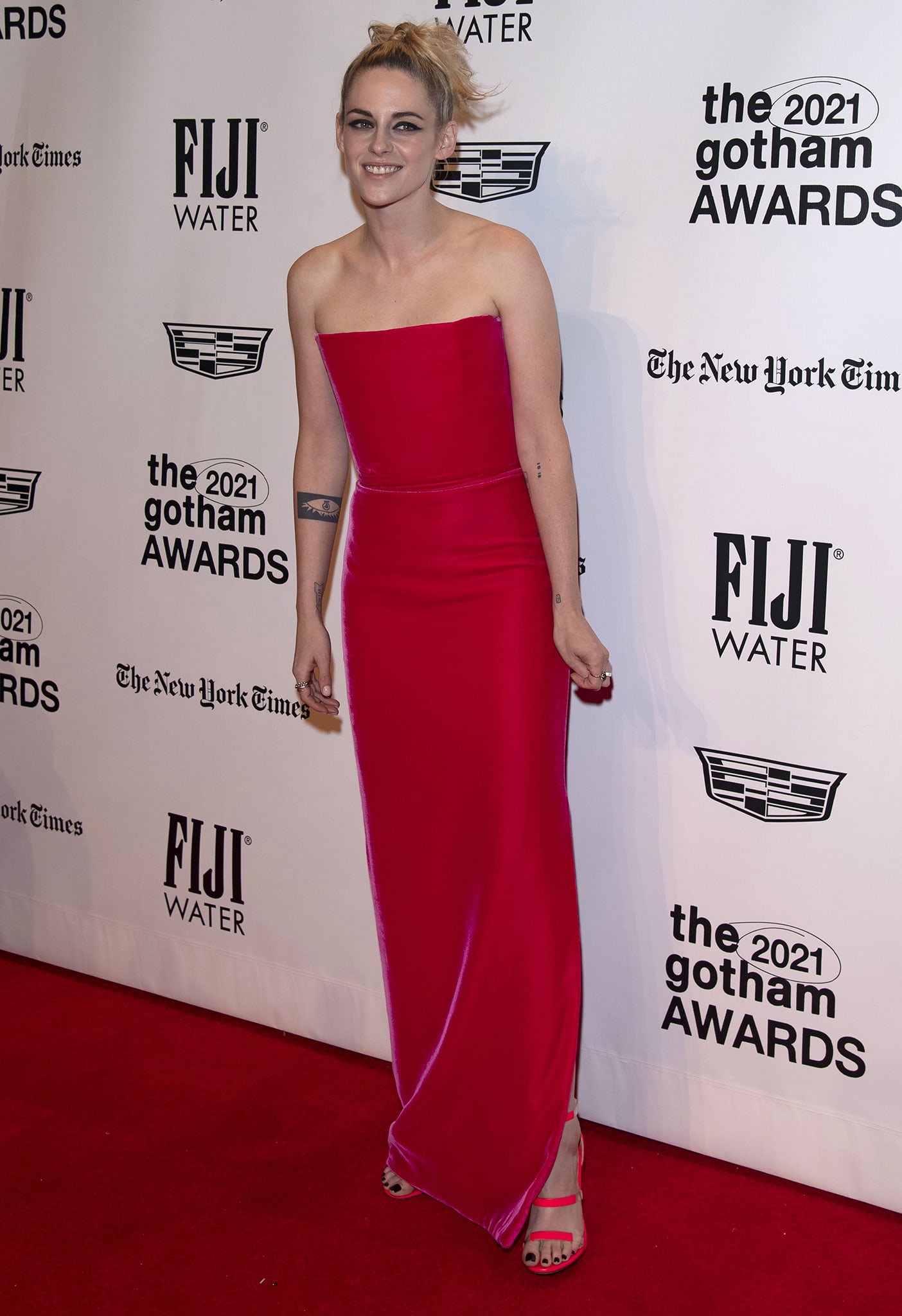 The dress also has a side slit that allowed us to get a glimpse of her Tamara Mellon “Frontline” sandals in matching neon pink color, selected by stylist Tara Swennen. You can check out her popular high heels at Tamara Mellon’s website.

These sandals feature a three-strap design with clear PVC inserts, a back zip, and about 4-inch heels. 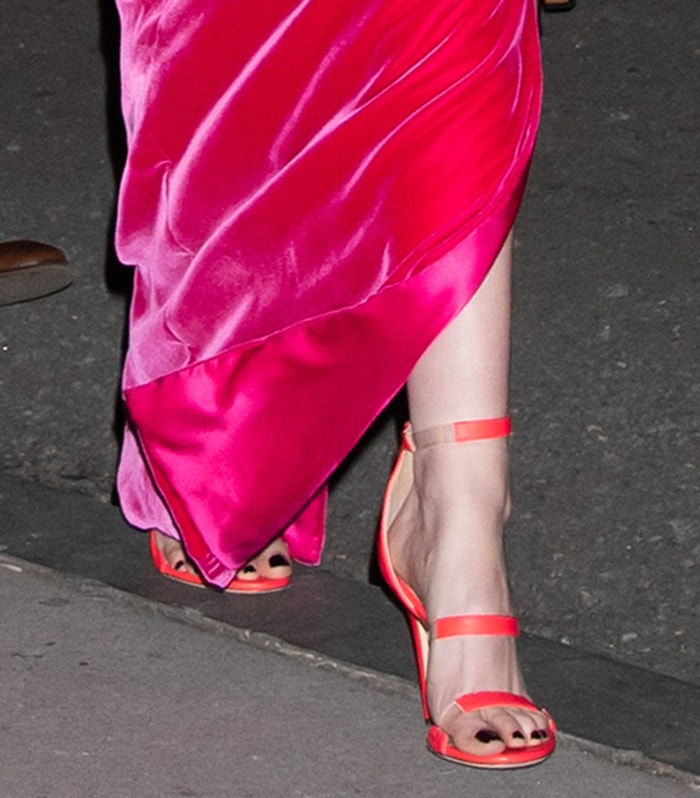 Letting her dress do the talking, Kristen kept her jewelry to a minimum. She opted for a bare neck, skipped any earrings, and accessorized with just a few silver rings, including a $30 Pandora ME ring, a $490 Gabriela Artigas Chain Ring, a Chanel Camelia Sculpture J 2940 Onyx Rose ring with diamonds, and two Jillian Dempsey rings. 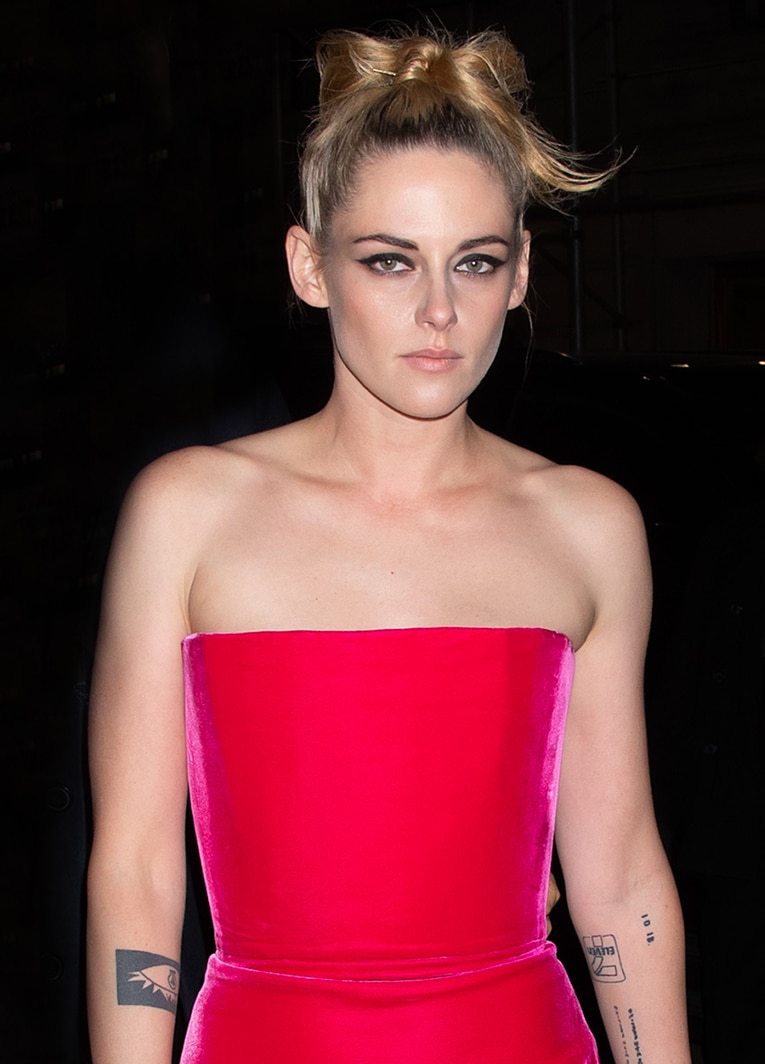 “I don’t give a sh*t,” the actress said, adding that “the Oscars are such a funny thing.”

“There are so many incredible movies and performances that barely get seen. It definitely says something about where we’re at as a cumulative presence—what we’re looking at, what we care about. I really appreciate that something that I was involved in, has ignited such a large conversation. We don’t make movies to not connect with each other.” 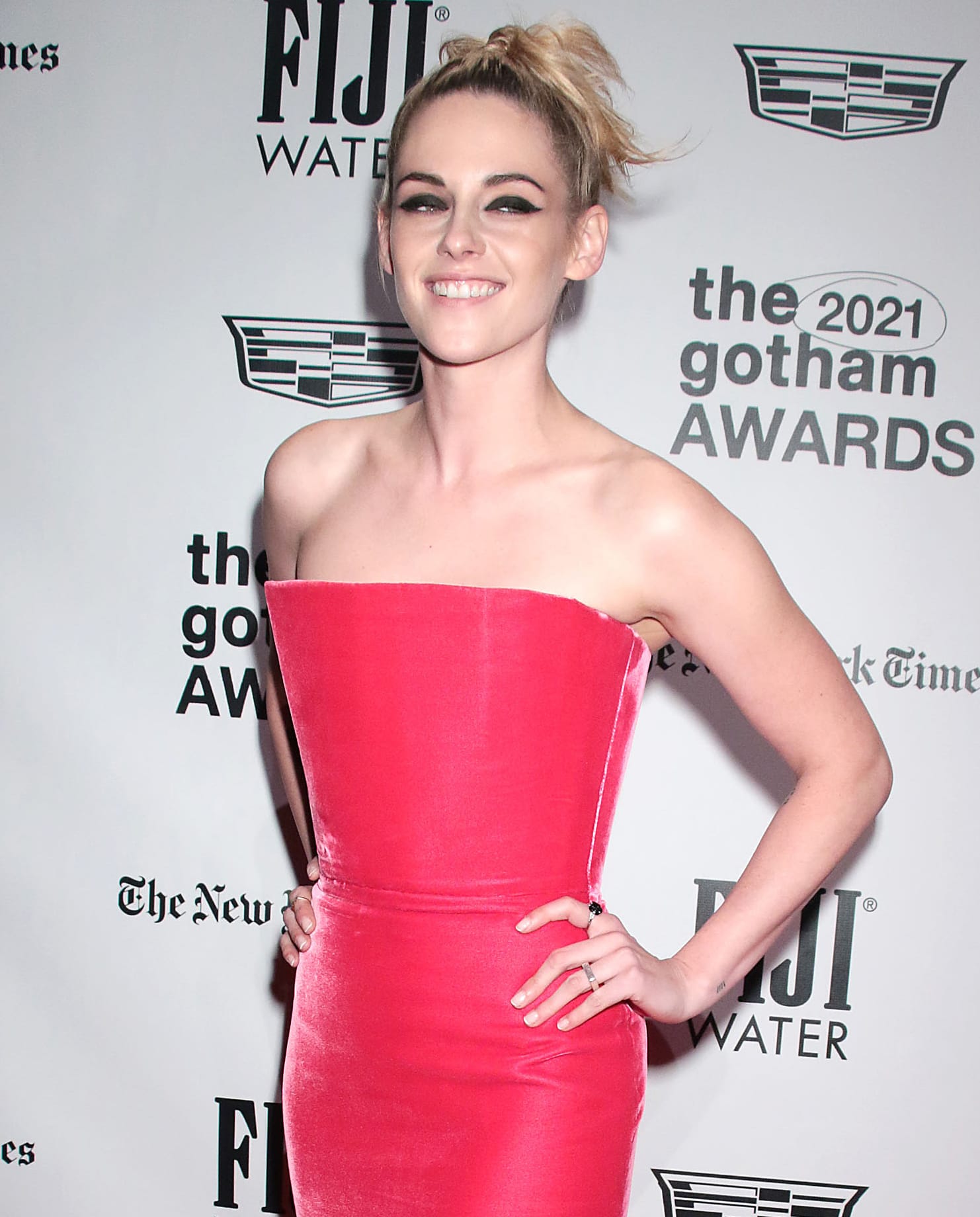 Kristen Stewart says she doesn’t give a sh*t about a potential Oscar nomination for her Spencer performance (Credit: Mega / WENN)

Kristen’s co-star in the 2014 independent drama Still Alice, Julianne Moore, presented her with the award.

The two posed on the red carpet alongside Spencer director Pablo Larrain, who also presented a Performer Tribute award to Peter Dinklage. 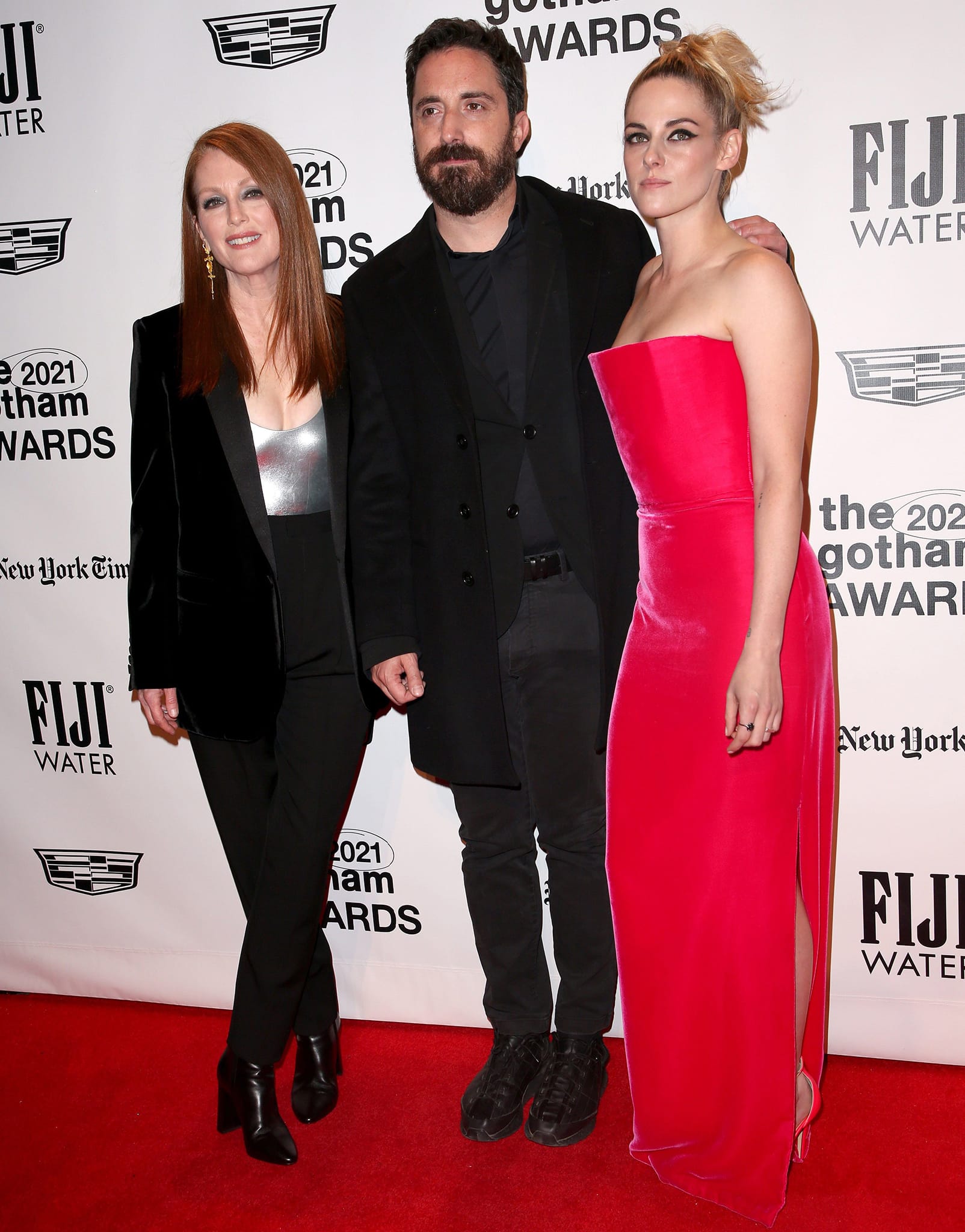 Looking business-ready, the 61-year-old actress suited up for the event with the help of celebrity stylist Leslie Fremar.

She wore a chic Saint Laurent ensemble that put her ample cleavage on display. It included a silver corset-style top, which was layered underneath a black velvet blazer and tucked into a pair of black trousers. 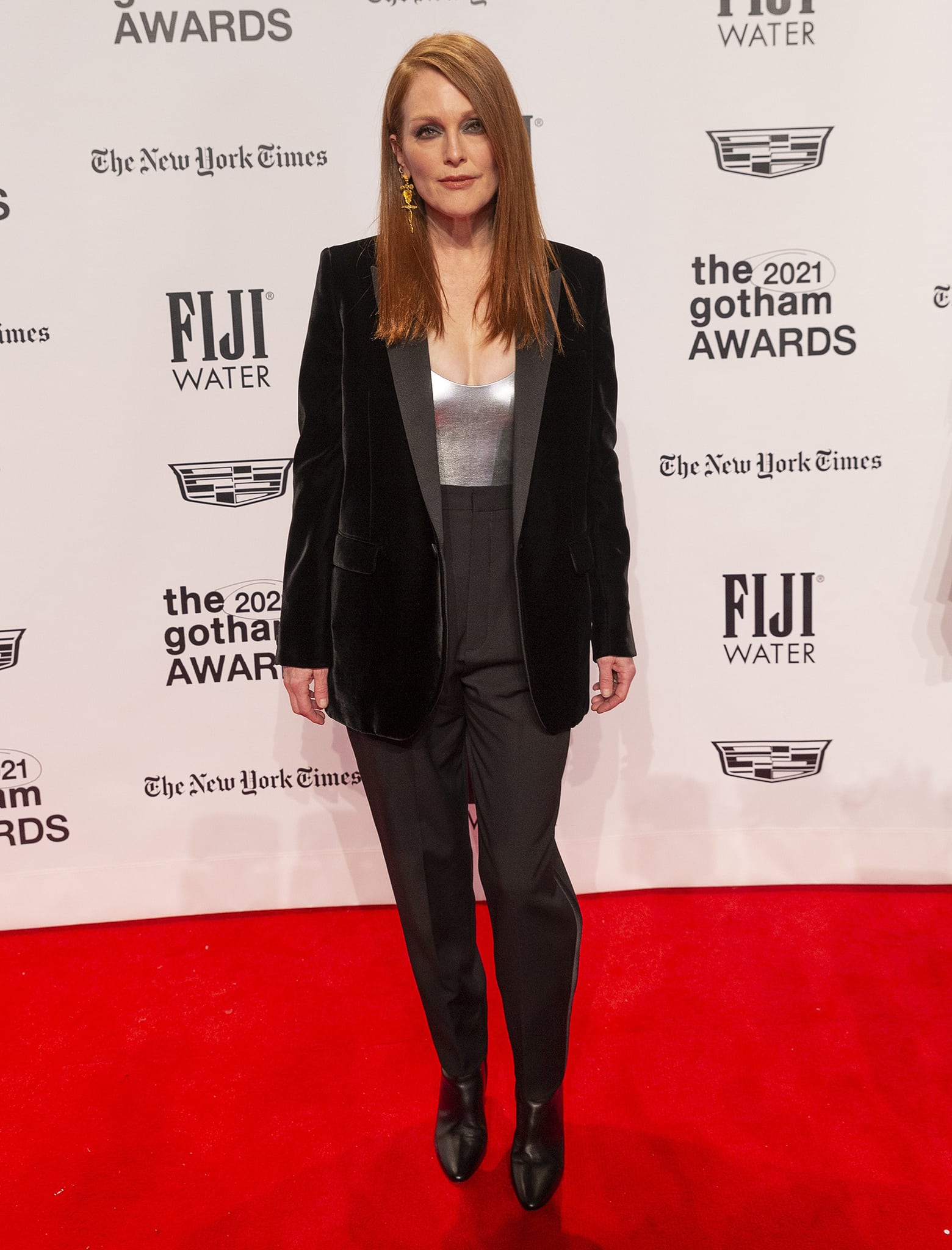 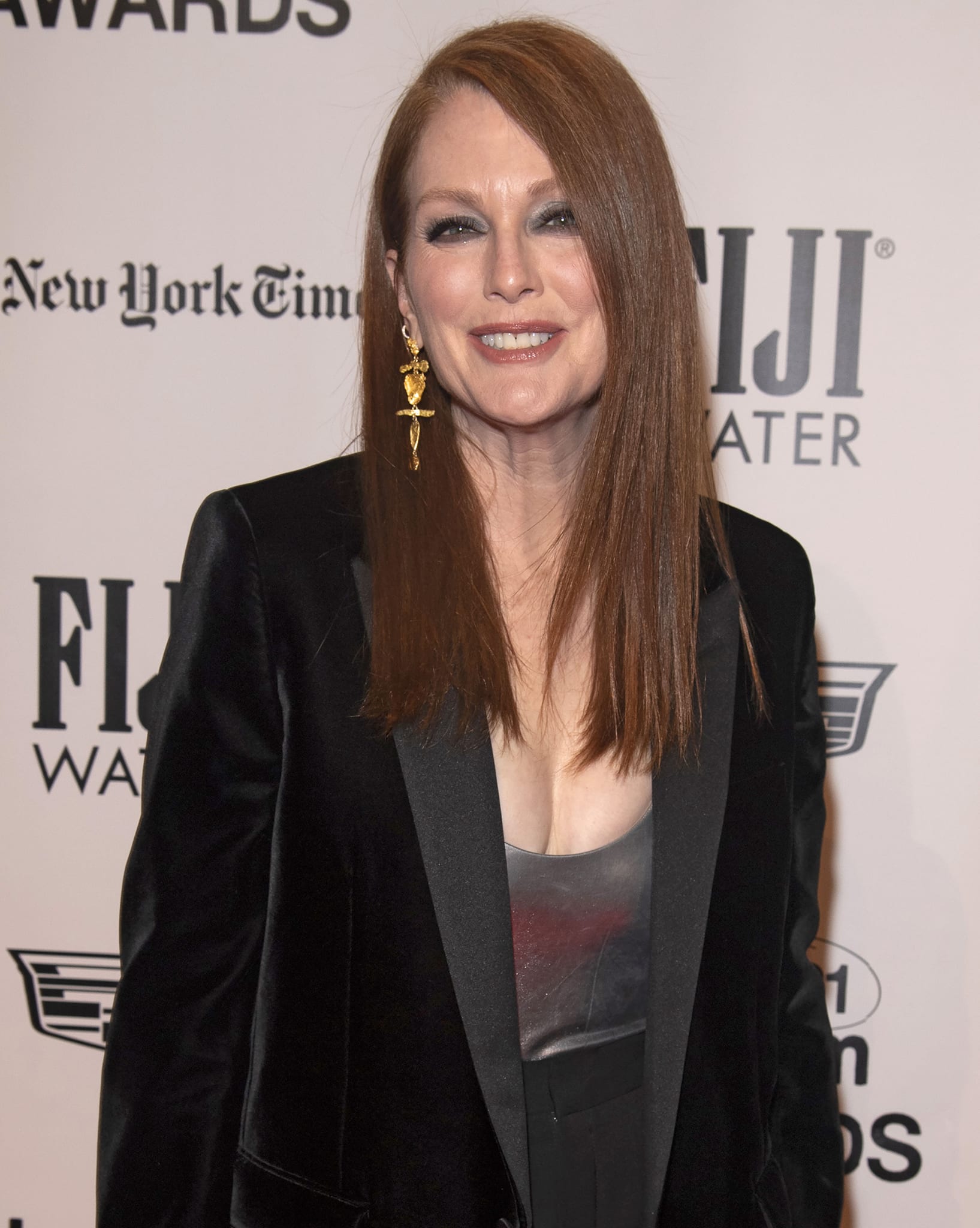