The Australian actress left the world confused with her fashion choices at the premiere of her newest movie.

Actors Nicole Kidman and Javier Bardem appeared with the rest of their co-stars at the premiere of “Being The Ricardos” in New York.

“When the reality of playing [Lucille] hit me, I went, ‘What I have said yes to?’” Nicole said on Live with Kelly and Ryan on Friday.

“To which I then went, ‘Oh no, I’m not right. Everyone thinks I’m not right, so I’m going to try to sidestep this.’” 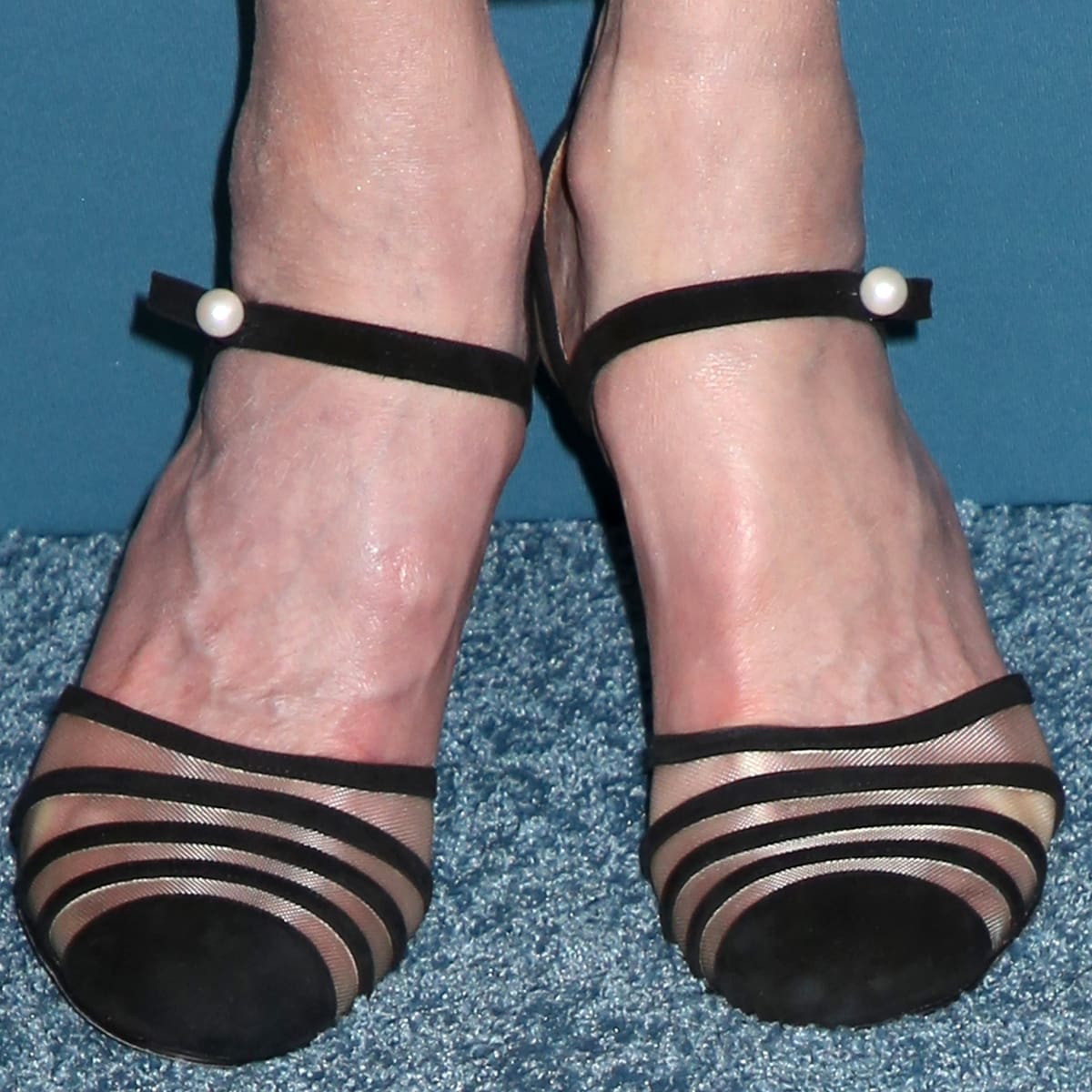 “The producer Todd Black and [director] Aaron Sorkin were both like, ‘Absolutely not.’ I was in Australia and they were like, ‘No.’ And thank God, because then I was so grateful because I got to fall in love with her.”

For the premiere of Being the Ricardos, Nicole Kidman opted for elegance in white while adding a dash of black details. Once again, she proved that this color combo works perfectly and looks amazing at formal events. 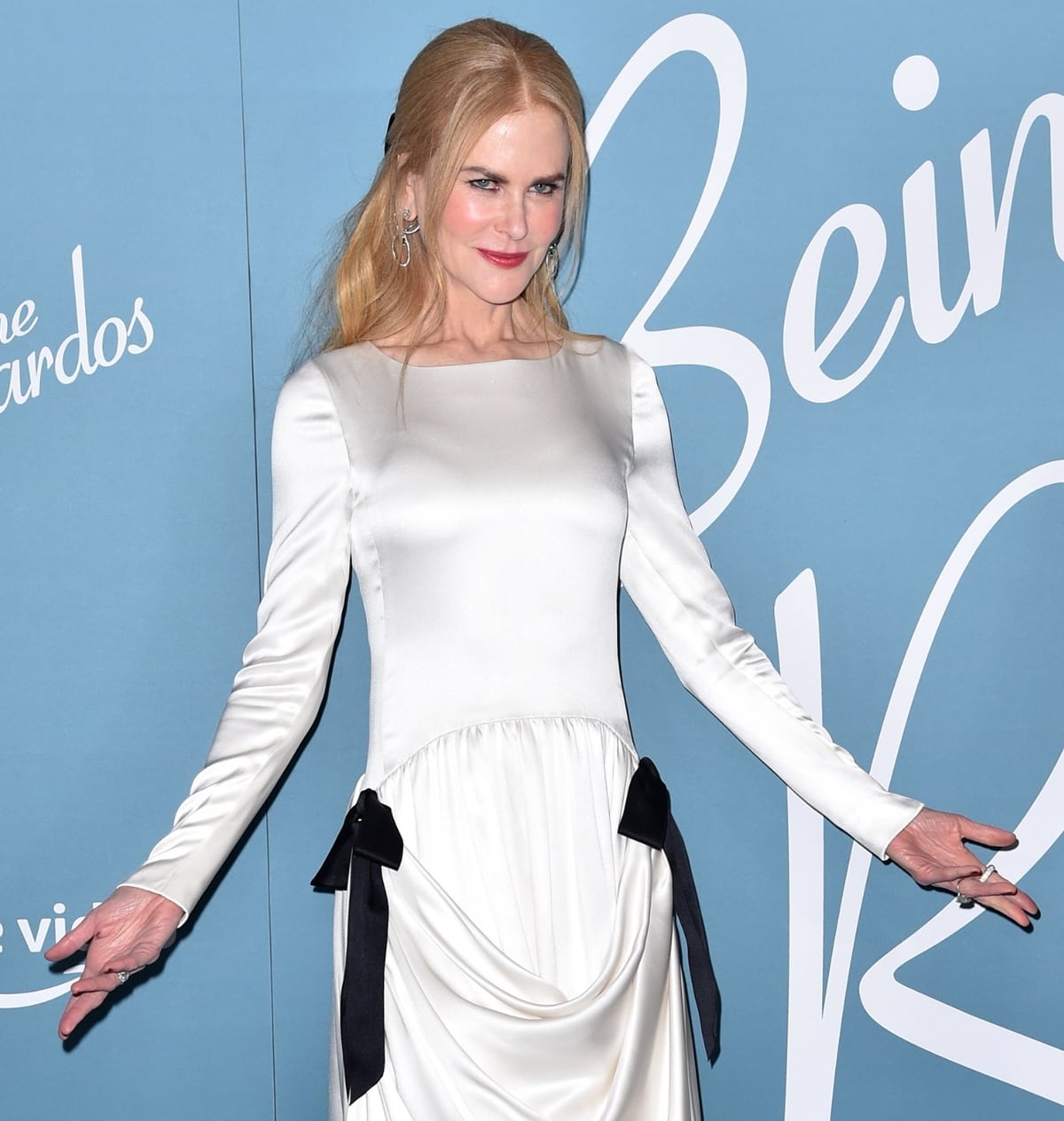 The velvet black bow barrette in her half-loose hair, which perfectly matched the bows on the dress, proves that her stylist took every detail into account.

Jennifer Behr is the designer responsible for the perfectly put-up barrette which adorned Kidman’s gorgeous hair. You can buy her black barrett clip from the American jewelry designer at Shopbop. 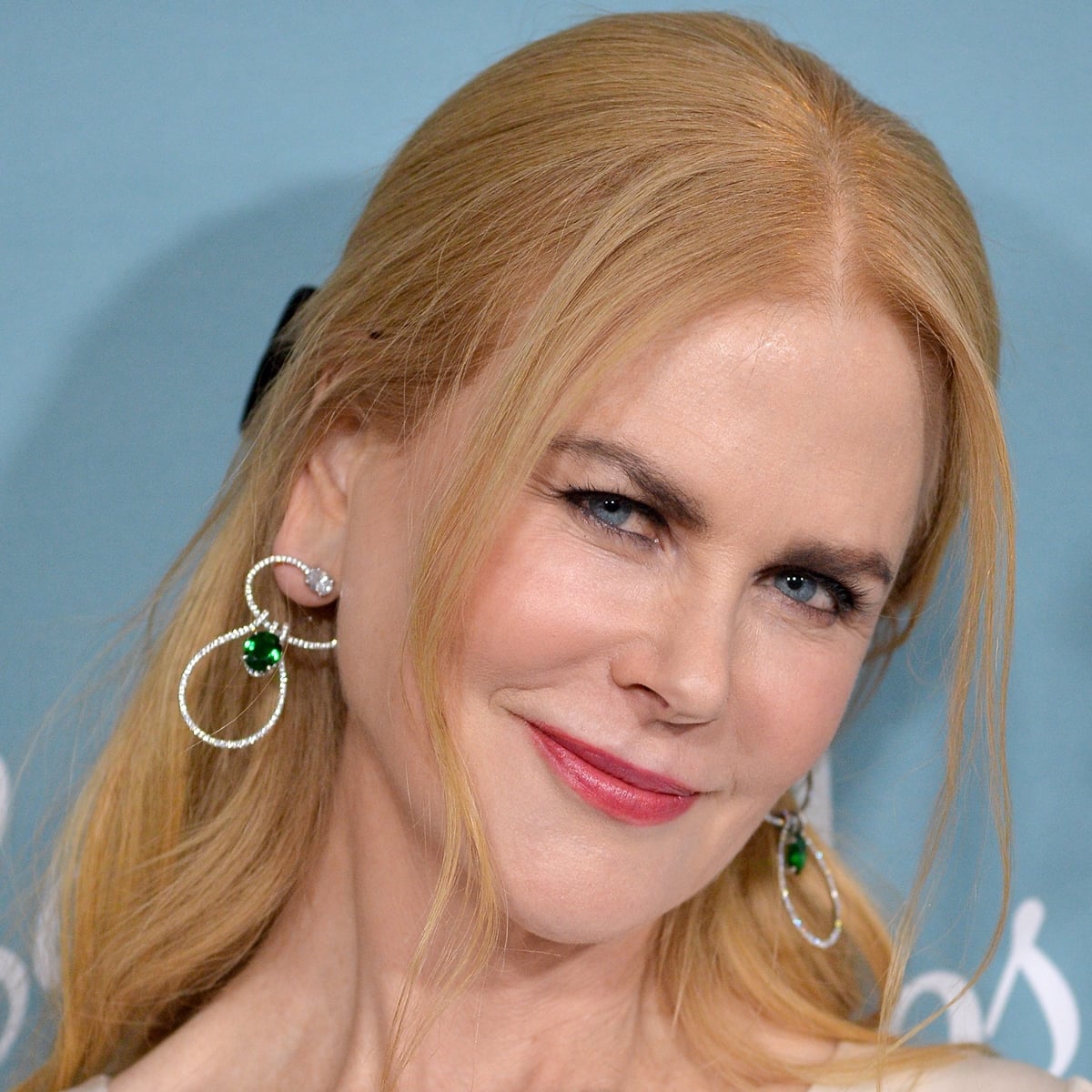 Planetarily popular actress Nicole Kidman, on and off the red carpet, almost always shines and is considered a fashion icon. She emphasized her signature red hair by wearing a black bow barrette to the premiere.

However, immediately after the photos of Nicole Kidman’s newest look went around the world, opinions were divided. Many people didn’t like her outfit because it made her look pale and washed out. Perhaps she should have added a few more black details? 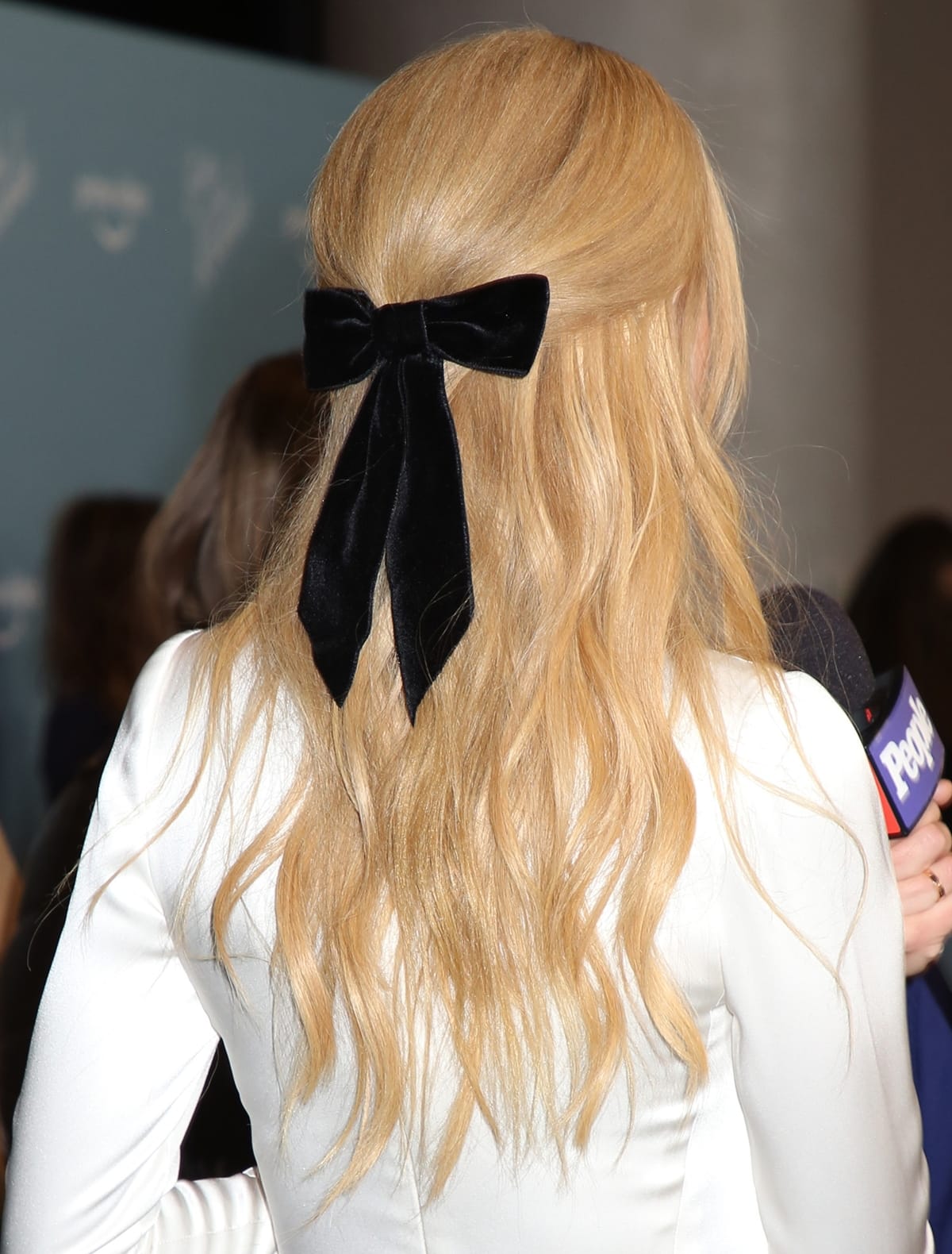 As Nicole has quite a pale tan, more black details would have broken down the monotony of this look.

On the other hand, Javier Bardem arrived at the premiere in a burgundy jacket, a white shirt without a tie, and black pants and shoes. If you ask us, these two definitely matched and looked fantastic! 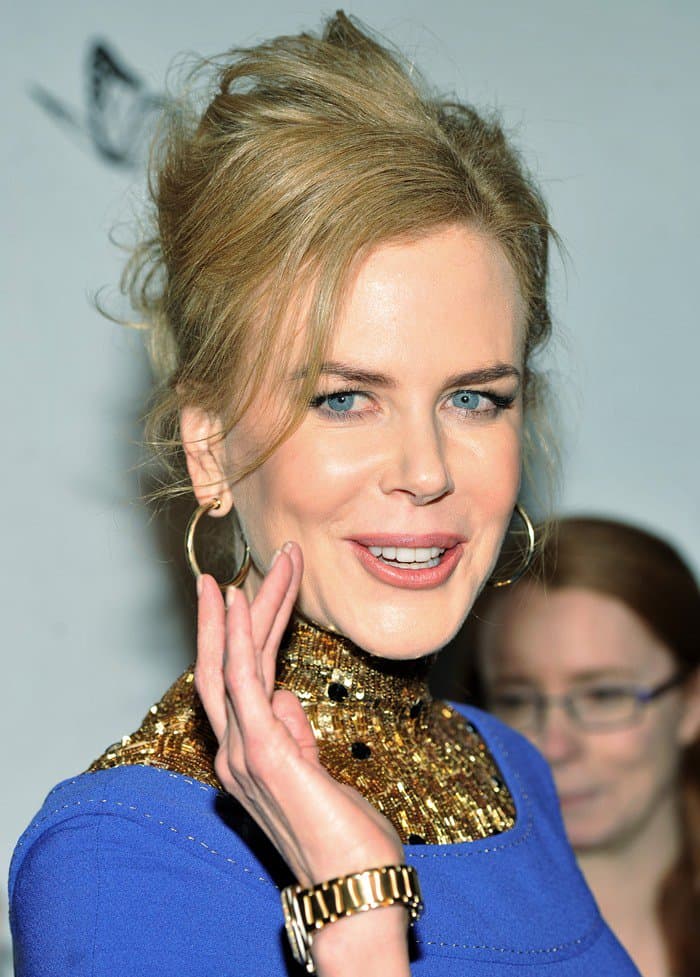 It was a look straight off the runway and she wore it oh-so fabulously to the London screening of the 2013 psychological thriller film Stoker.

Nicole Kidman in a blue dress at a screening of her movie Stoker at the Curzon Soho Cinema in London on February 17, 2013 (Credit: WENN)

The Peacemaker actress styled her blue dress with small hooped Stroili Oro earrings and pointy stiletto heels from the same L’Wren Scott collection. Her 23-carat gold-leaf pumps were quite hard to ignore. 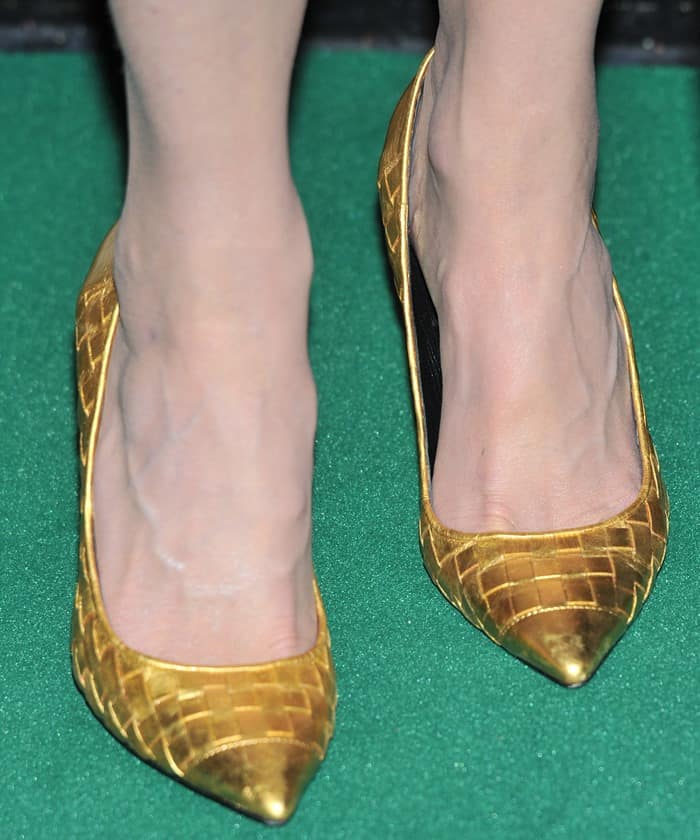 Nicole Kidman shows off her feet in gold and woven pumps (Credit: WENN)

Here’s a different view of those shoes for you, as seen on the L’Wren Scott catwalk during London Fashion Week. They are woven and very glamorous. These pumps also come in that really yellowish shade of gold. 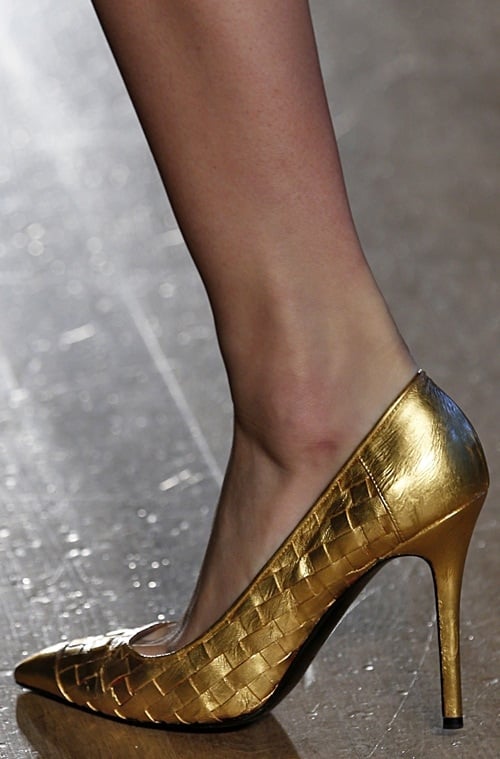 Is this a pair you’d consider wearing? How do you like the very yellow gold-tone? Do you find it rich, or is it too flashy, maybe gaudy?