Jenna Dewan is an American actress and dancer. Her relationship history is best known for her nine-year marriage with popular actor Channing Tatum.

The pair met on the set of the 2006 film Step Up and were together for almost a decade.

Channing Tatum and Jenna Dewan met on the set of Step Up and were married from 2009 to 2019 (Credit: Lexi Jones / WENN)

They share an 8-year old daughter, Everly, who they co-parent together. In April of 2018, Jenna and Channing released a statement announcing their split, and the world was shocked.

Not all hope was lost though, as just a few months later in October 2018, Jenna had officially begun dating Steve Kazee…

Steve Kazee is an American actor and singer, who has had success with roles both on-stage and on-screen.

He dated Smash actress Megan Hilty for six years before calling it quits in 2012.

“The lessons I’ve learned about my time with Megan, six wonderful years, will live with me forever,” he told Blouin Artinfo about Megan Kathleen Hilty in July 2013. One year after her split from Kazee, she married musician Brian Gallagher.

“I have zero angst or anxiety about her. She’s a warm, caring, immensely talented, lovely human being.” 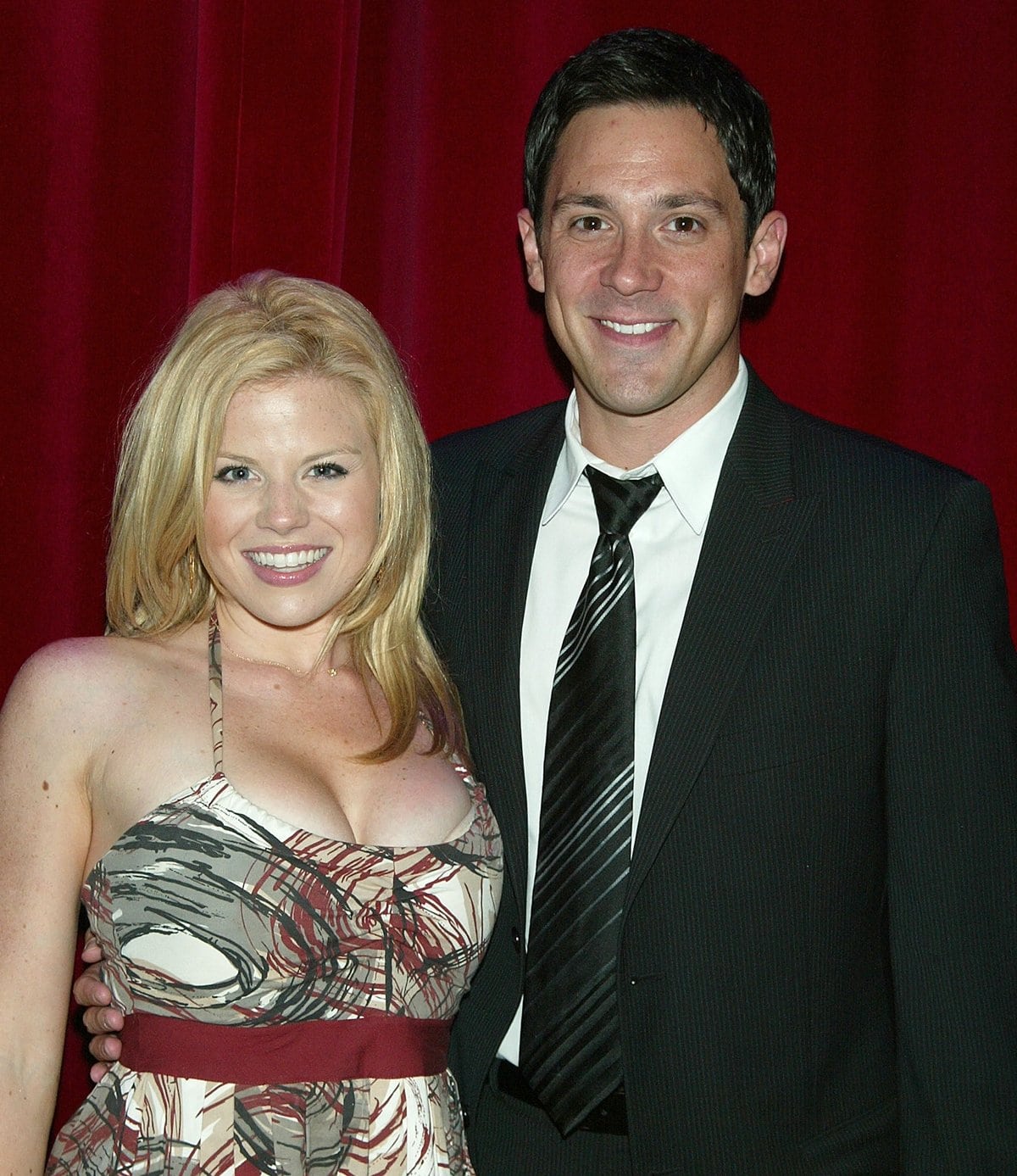 Steve Kazee and Megan Hilty split in 2012 after six years together (Credit: WENN)

Kazee has also had brief relationships with Michelle Beadle and Christina Perri. To public knowledge, his relationship with Jenna Dewan is one of his most serious to date. 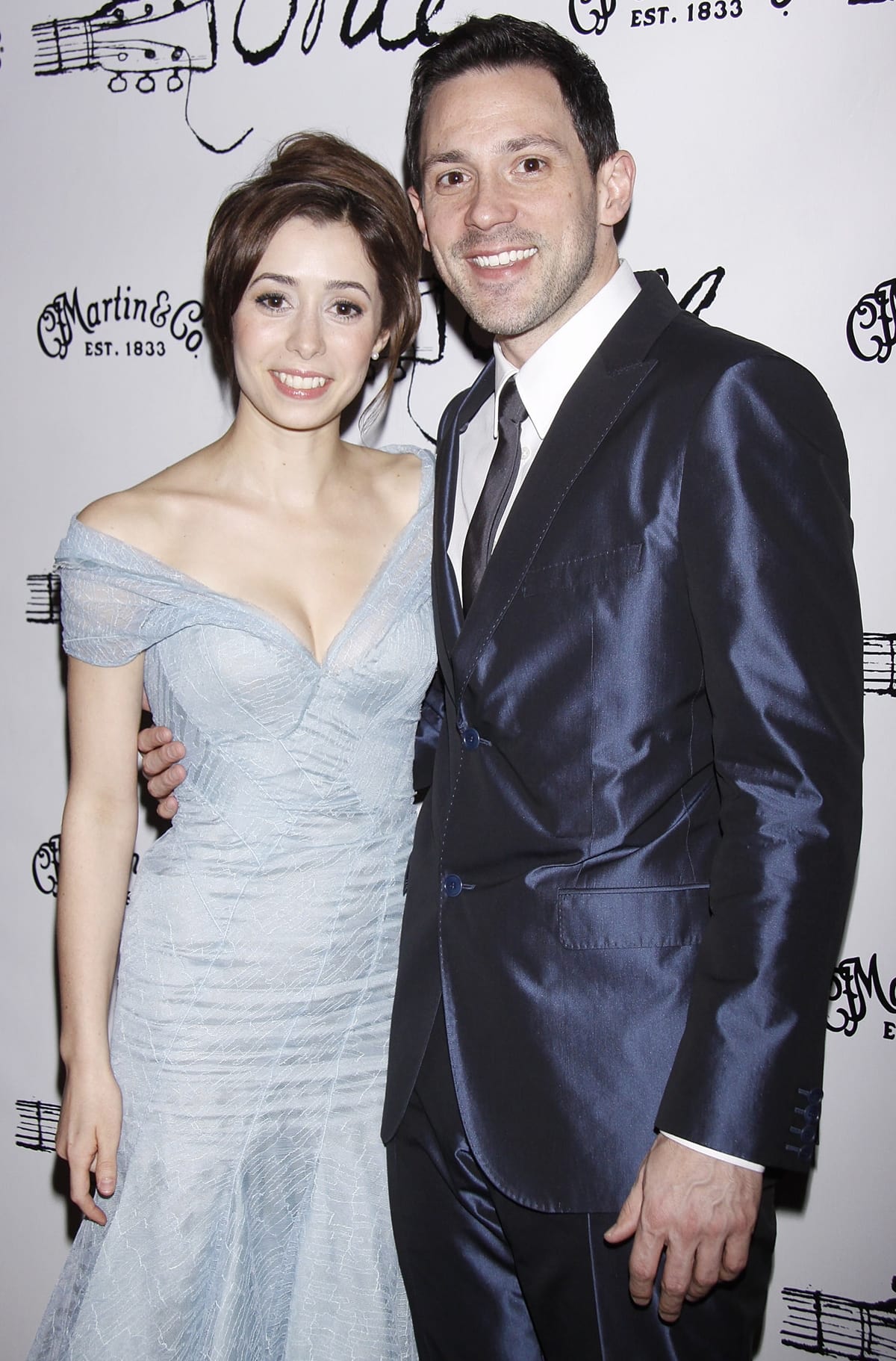 Cristin Milioti and Steve Kazee dated briefly in fall 2012 and he was featured on her song “A Thousand Years, Pt. 2” for the second installment of the Twilight saga’s Breaking Dawn (Credit: Joseph Marzullo / WENN)

Proving that the world works in mysterious ways, Jenna Dewan and Steve Kazee actually met years before they began dating.

They met way back in 2012, while Steve Kazee was starring in the musical “Once,” for which he won a Tony award. 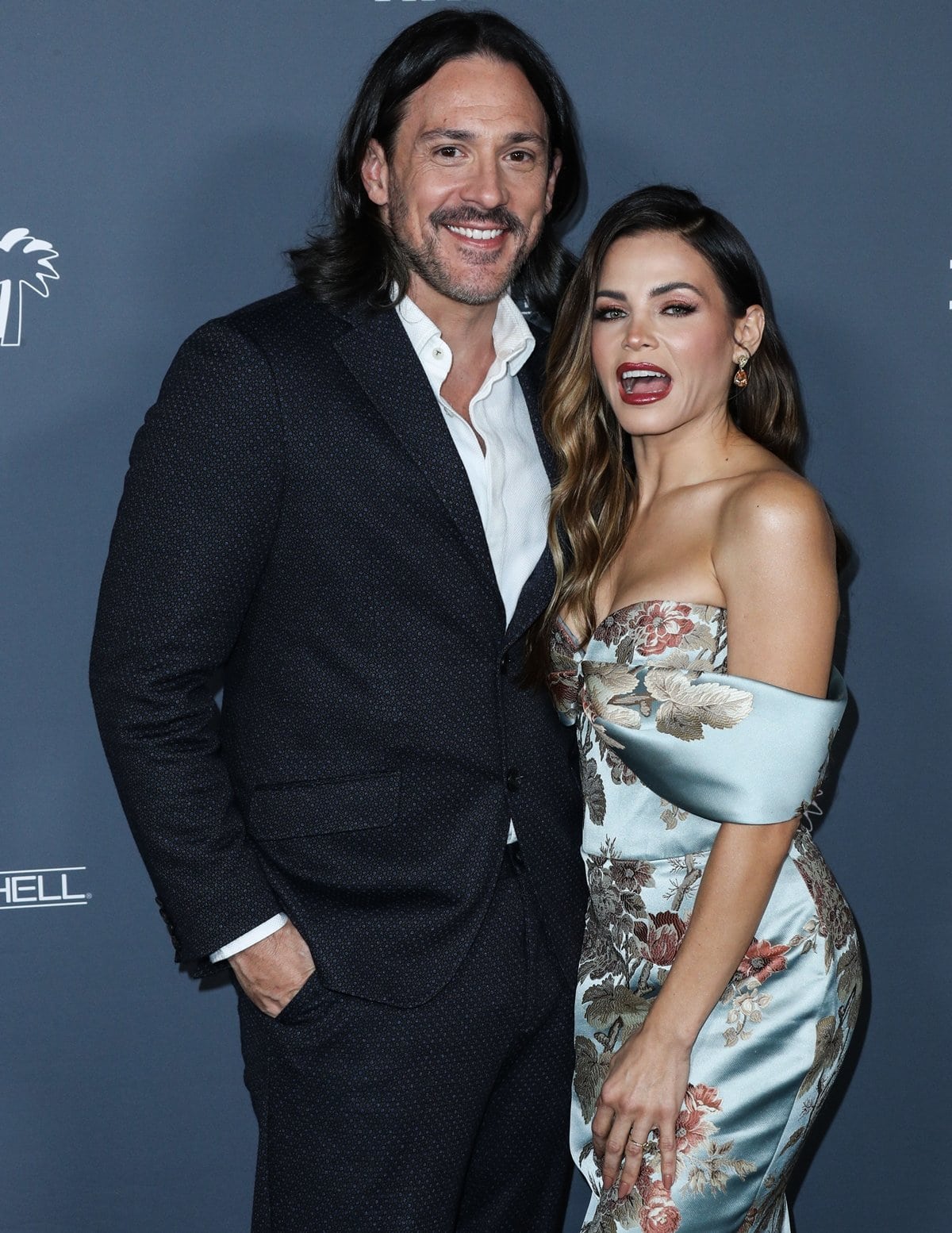 Steve Kazee met Jenna Dewan met for the first time when he was starring in the Broadway musical Once (Credit: Avalon / WENN)

Jenna attended the show, and they chatted, but Jenna was still married to Channing Tatum at the time.

However, years down the line when Jenna and Channing announced their mutual split, Steve reached out and revealed that he had never forgotten Jenna. The rest, as they say, is history.

About Jenna Dewan and Steve Kazee

Jenna Dewan is 40 years old and stands at a petite 5’1 feet. She has an enviable estimated net worth of approximately $30 million, some of which likely came from her divorce settlement with Channing Tatum.

6 years older than Jenna, Steve Kazee is 46 years old and stands at 5’9 feet of height. He has an estimated net worth of around $1.5 million. 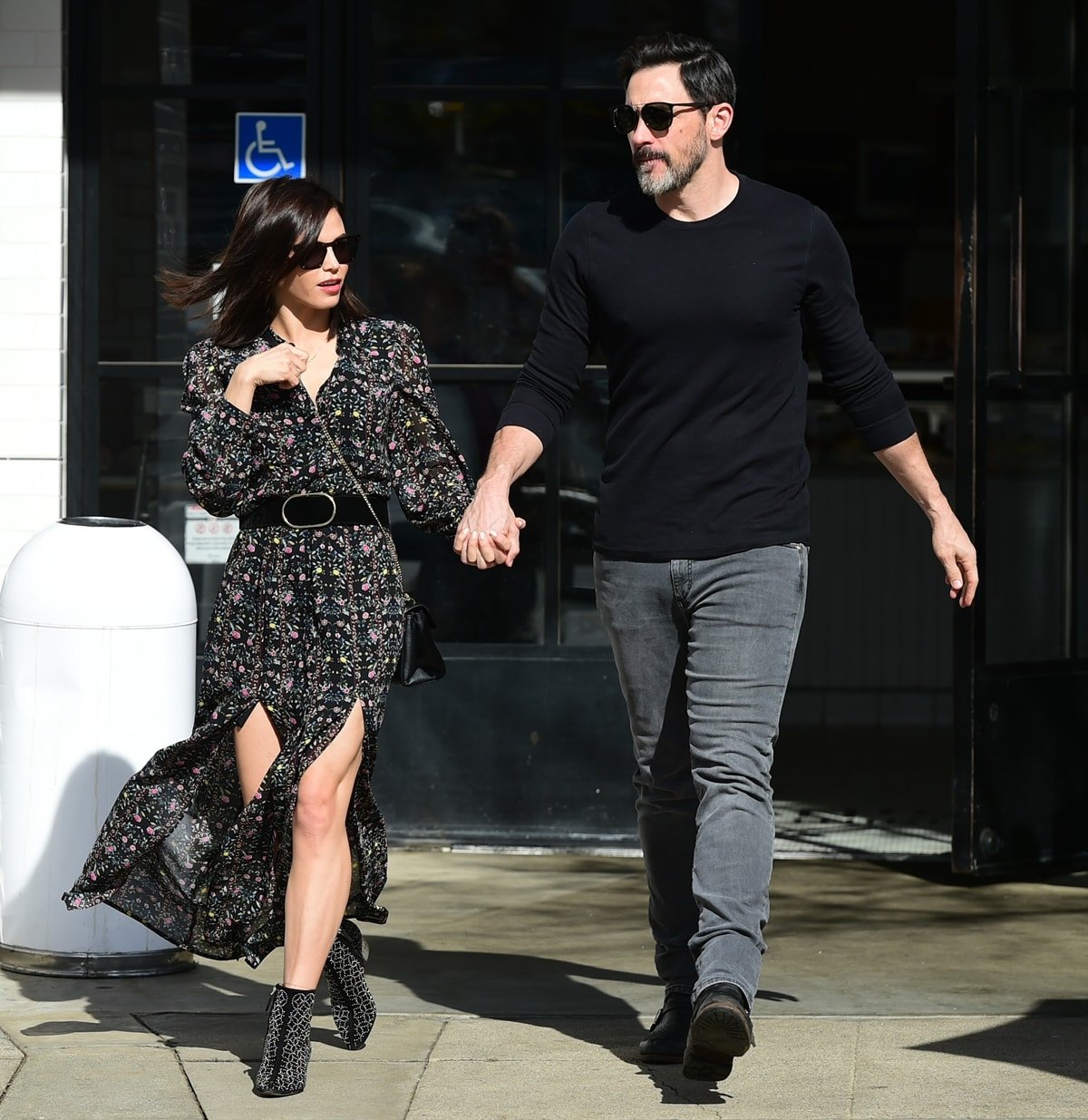 Steve Kazee is much taller but not as wealthy as his girlfriend Jenna Dewan (Credit: Avalon / WENN)

While Jenna Dewan may have a couple more millions in her pocket than Steve Kazee, both are undeniably successful in their own right.

May-August 2018: Jenna Dewan does an interview with Harper’s Bazaar and discusses what it’s like to be single after so long. She says she’s having fun and finding herself again.

Sometime during this summer, Steve Kazee finds her again as well, reaches out, and the two reconnect.

September 2018: Sources reveal that both Jenna Dewan and Channing Tatum have moved on and have begun to see other people.

Both Jenna and Channing claim that they aren’t involved in anything serious, but have been having fun and going on dates (not with each other, of course).

The exact identities of their new respective partners are still unknown at this point in time.

October 2018: It’s revealed that Channing Tatum has officially started to date the English singer-songwriter Jessie J. While some worried for Jenna Dewan at this time, she revealed that she had also begun seeing someone else. 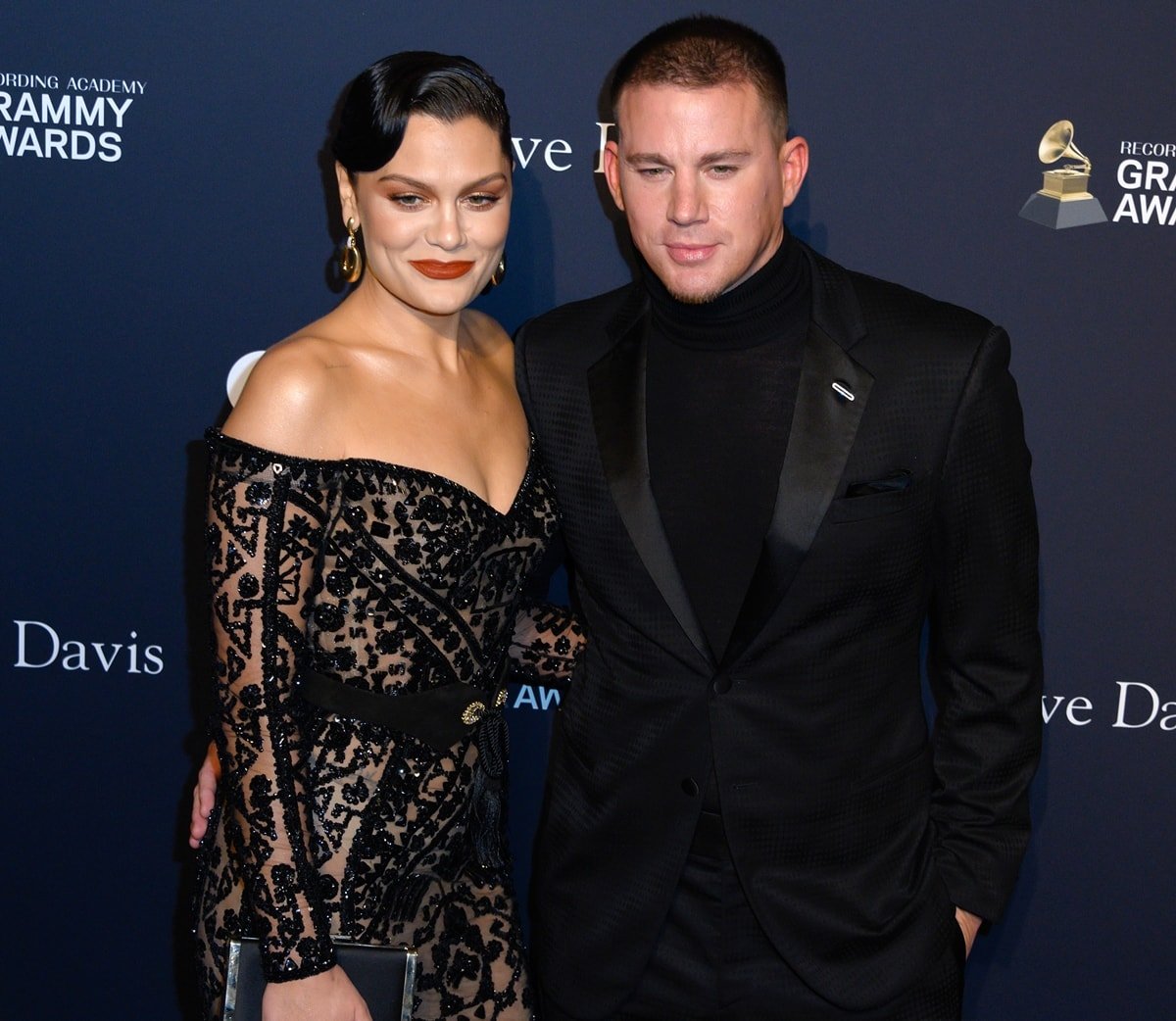 However, she and Steve Kazee kept their relationship quiet until the very end of October 2018. On October 27th, Jenna Dewan officially files for divorce from Channing Tatum.

It was a seemingly amicable process, and Jenna requests to be known as just Jenna Dewan moving forward, rather than Jenna Dewan-Tatum as she has previously gone by.

On October 30th, 2018, the cat officially comes out of the bag, and rumors began circling that Jenna Dewan’s new beau was none other than Steve Kazee himself.

November 2018: Jenna Dewan and Steve Kazee steer clear of headlines the best they can, simply stating that they are happy and enjoy spending time with one another. 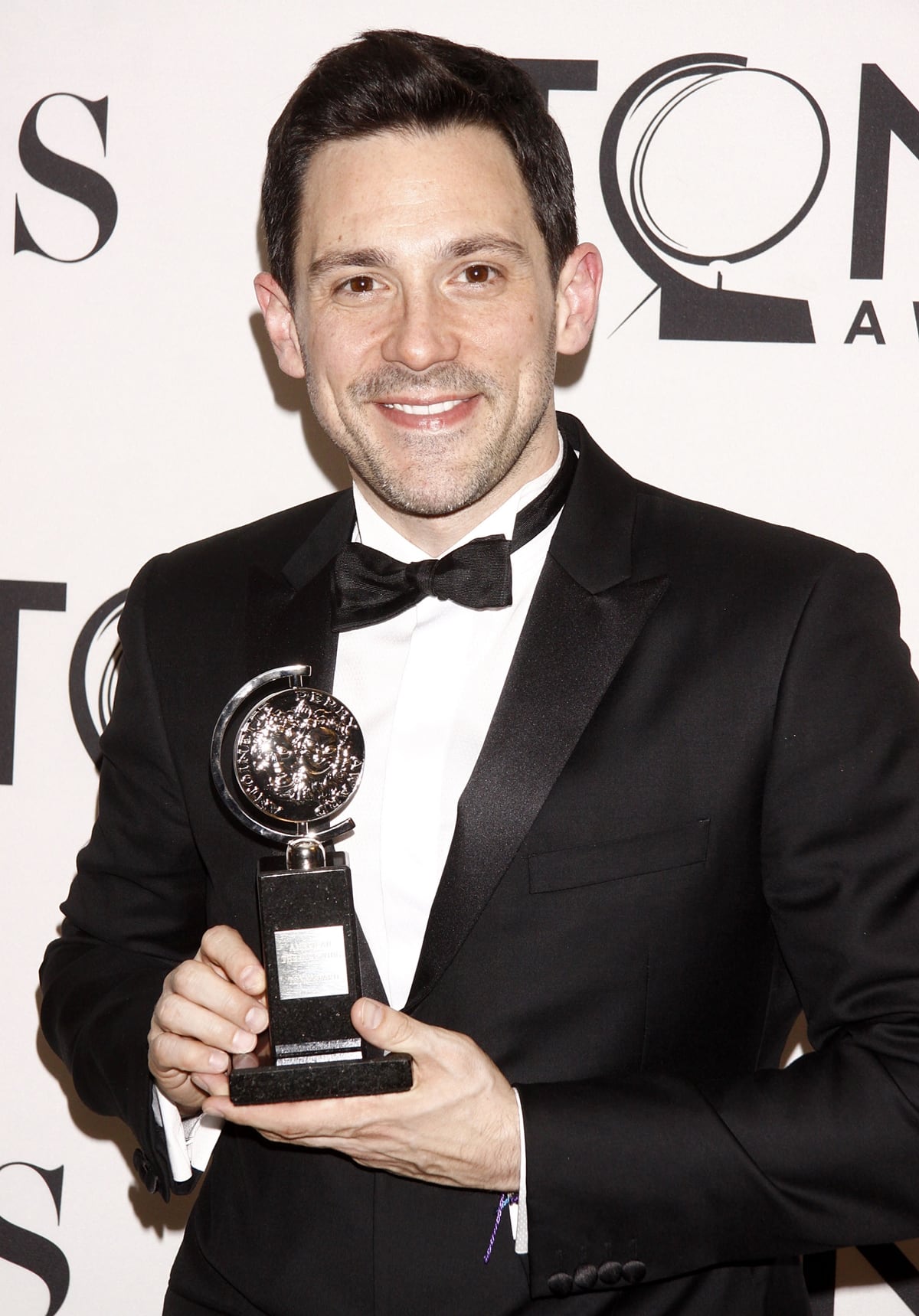 Steven Michael Kazee was awarded the 2012 Tony Award for Best Performance by a Leading Actor in a Musical for his performance as Guy in the musical Once (Credit: Joseph Marzullo / WENN)

Though, they are seen holding hands and looking loved-up in public on several occasions. In an interview with US Weekly, Jenna declines to discuss her personal life in-depth but promises that she is very content.

June – August 2019: Jenna Dewan and Steve Kazee enjoy a summer of love together, with many sweet photos and travel stories along the way. It’s all in good fun, and relatively uneventful, until…

September 2019: On September 24th, 2019, Jenna and Steve officially announce that they are expecting their first child together! They each make a lengthy, heartwarming Instagram post that features Jenna’s baby bump. 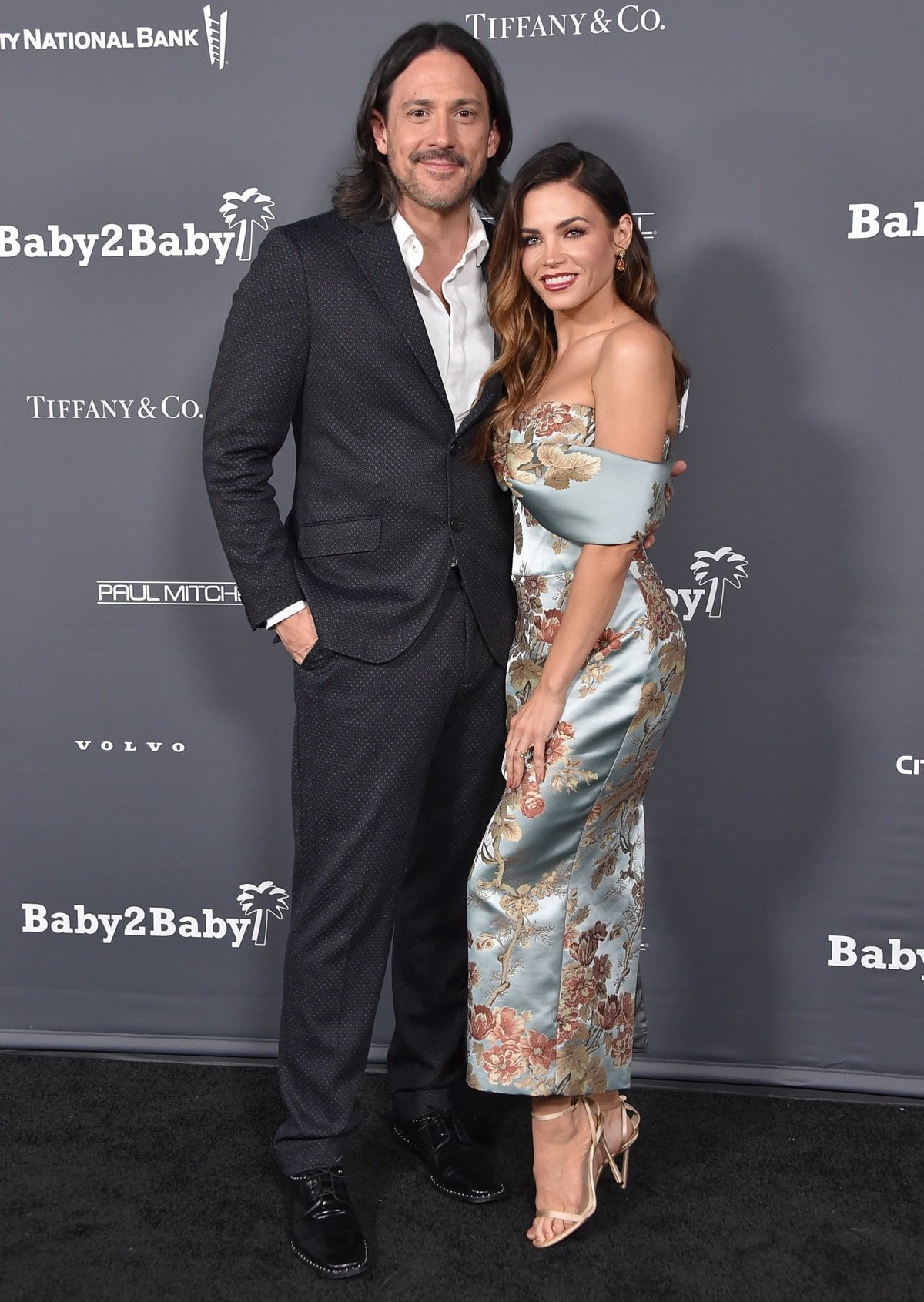 October – December 2019: The pair continues to share their pregnancy journey with the world, and Jenna attends several red-carpet events in gorgeous dresses that highlight her growing baby bump.

Steve Kazee continues to happily show Jenna off on his Instagram page, often gushing his love for her, and joking that he’s turned his account into a fan page.

February 2020: Jenna Dewan and Steve Kazee announce their engagement! With a baby and a marriage on the way, things couldn’t get much better for these two lovebirds.

“A lifetime to love and grow with you…you have my heart ❤️,” Dewan wrote in her Instagram caption.

May 2020: Having given birth earlier in the year, during the midst of lockdowns COVID-19 pandemic, Jenna Dewan shares the first official photo of their new family.

She posts a beautiful photo of Steve and their newborn son, Callum, snuggling together. Too cute!

June 2020 – Present: Jenna Dewan and Steve Kazee have been focused on their parenting journey, and have publicly shared several heartfelt moments along the way.

Jenna Dewan continues to co-parent with her ex-husband Channing Tatum, in a very amicable blended family structure thanks to the addition of Callum.

Callum is a common feature on both Steve and Jenna’s Instagram accounts, and rightfully so. He gets cuter with each month.

As their big day approaches, the pair is in full wedding-planning mode. Cheers to the happy couple! It is so exciting to see what the world has in store for these two.

Jenna Dewan and Steve Kazee are truly a perfect match. 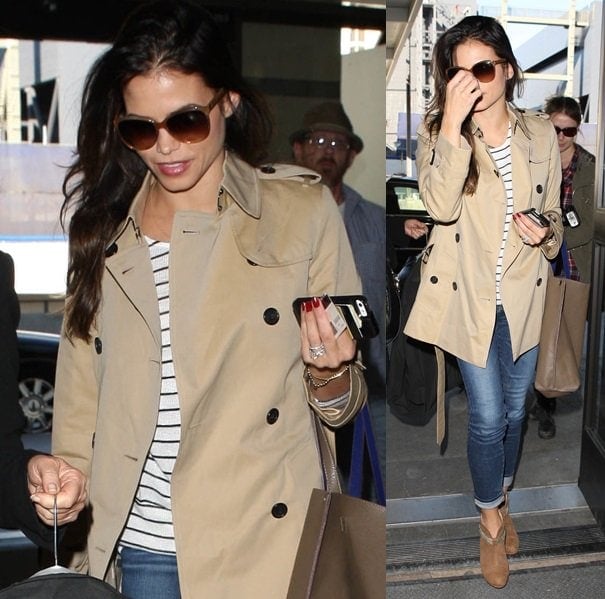 Jenna Dewan is no Olivia Palermo, but the American actress knows how to dress — whether it’s for a simple errand or for the red carpet. She’s one of the few celebrities who can actually put together a fabulous outfit without having to resort to a stylist.

In fact, we have yet to see her do a fail — unless, of course, you count the ensemble she wore at LAX in January 2014 a flop.

Her plane-ride style included a nautical striped tee worn over skinny jeans that were folded up at the ankles. She capped off her look with a classic khaki trench coat, some dark sunnies, a tote, and light brown suede booties. 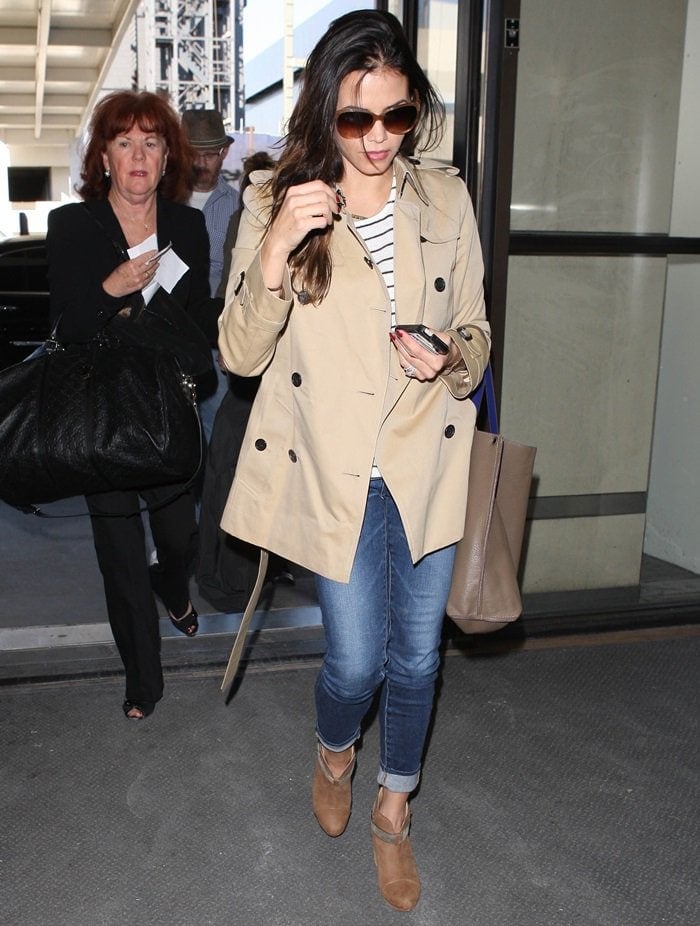 Jenna Dewan wearing a nautical striped tee worn over skinny jeans that were folded up at the ankles (Credit: WENN)

The look was almost Parisian chic but, somehow, not quite.

You know what? She looked good, and that’s all that matters. Jenna gave us her own take on French fashion by sporting Western booties with the outfit instead of, say, flats.

Jenna Dewan gave us her own take on French fashion by sporting Western booties (Credit: WENN)

Speaking of the booties, those look quite familiar, don’t they? They’re the “Harrow” booties from Rag & Bone.

Unlike the celebrity-favorite Rag & Bone “Newbury” boots, these shoes have shorter shafts that feature a flattering silhouette detailed with a curved notch at the center front.

They also come with contrast crisscross straps that wrap around the ankles and buttons for fastening. Below is a closer look at the Harrow for you: 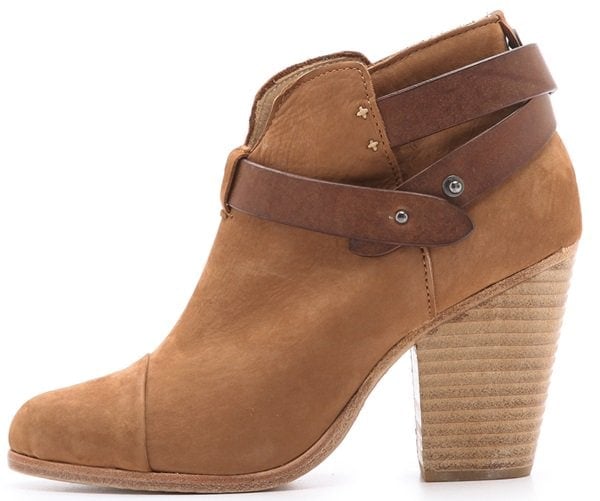 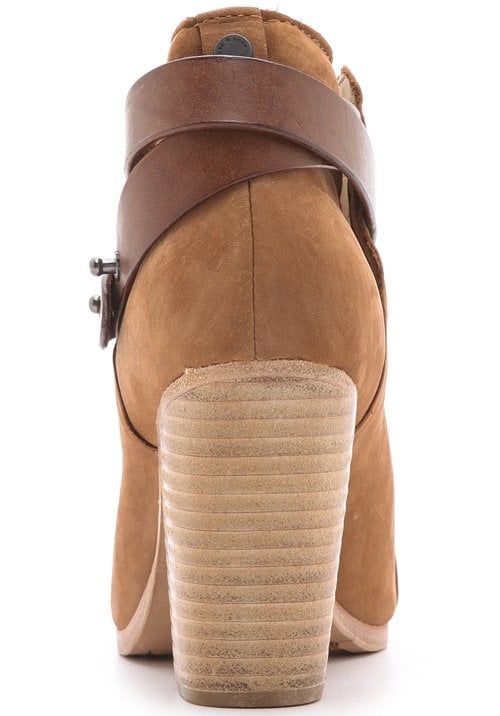 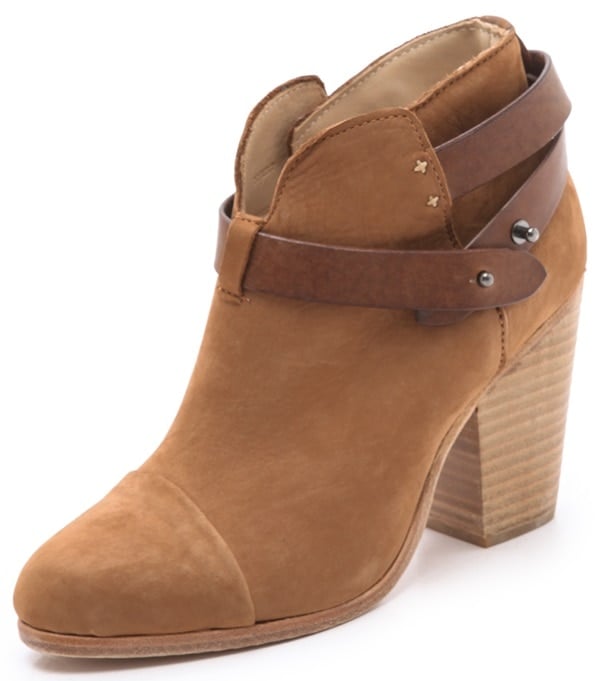 Do you like these booties? Their heels are a little taller than those of the Newbury — around 3.5 inches vs. the Newbury’s 3.25 inches. If you want Jenna’s booties, you can grab them for less at Shopbop. 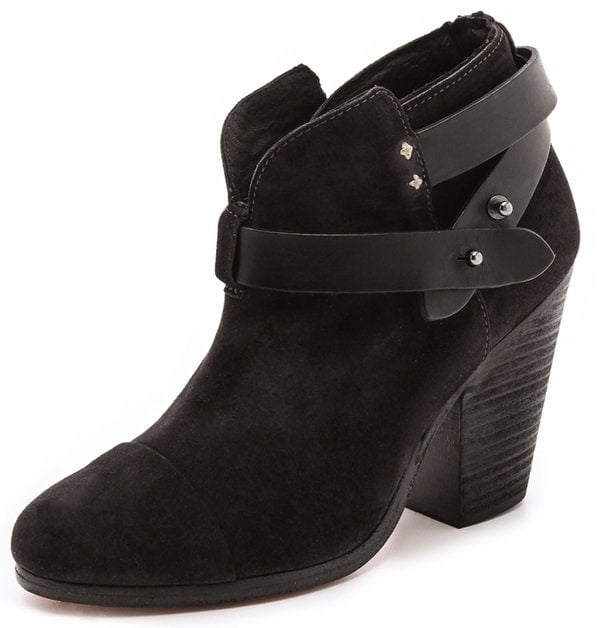 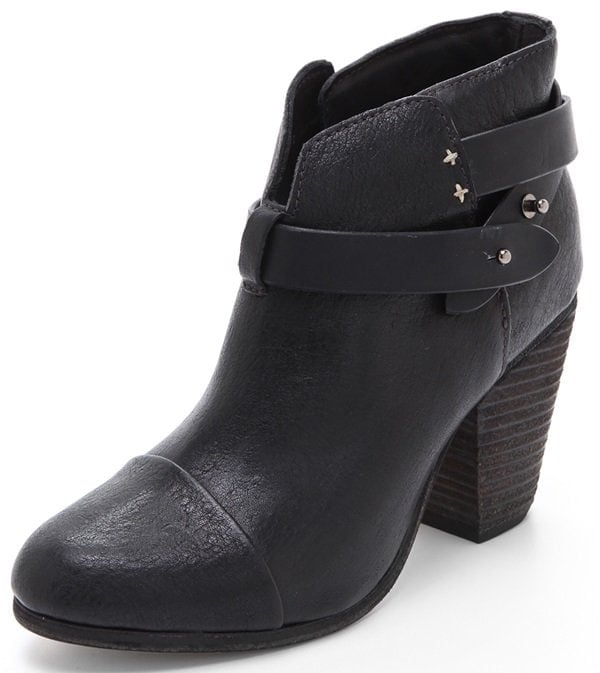 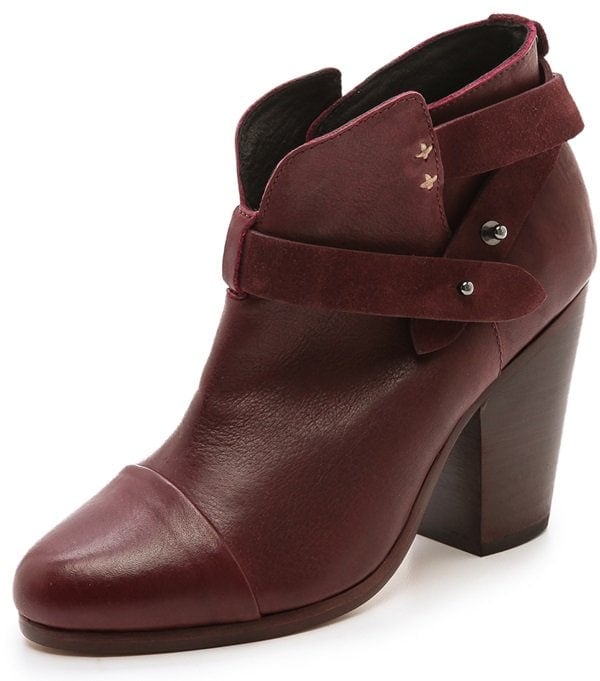 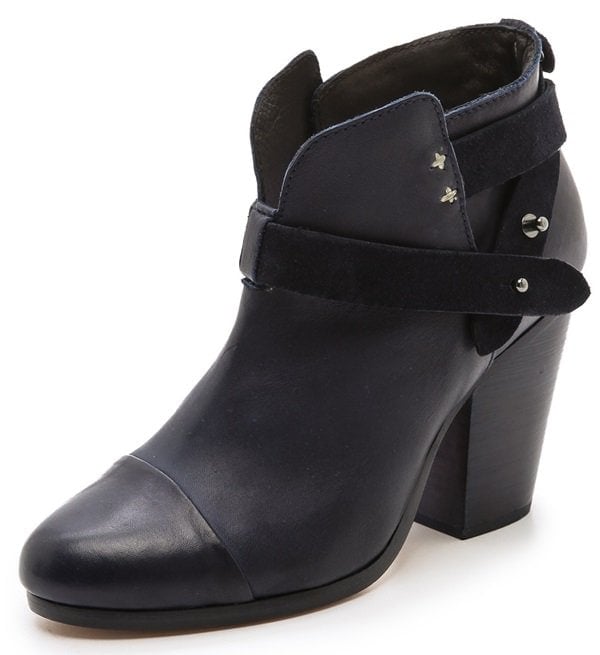