You may know Ashley Benson from the movie, Spring Breakers, or the TV Series, Pretty Little Liars, where she played one of the main characters, Hanna Marin, from 2010 – 2017.

She is a 31-year-old American actress, singer, and model originally from Anaheim, California. Ashley has also been in the public eye for her open bisexuality and her previous relationships with model Cara Delevingne, rapper G-Eazy, and actor James Franco.

Ashley recently attended her friend Paris Hilton’s wedding and turned heads with her fashion choices at each of the parties.

Ashley and Paris recently wrapped working on a new film together. The film, 18 & Over, is a “pandemic-inspired slasher film” produced by Ashley Benson.

Ashley also acts in the movie, alongside Paris Hilton, who plays herself in the movie. Director, Jimmy Giannopolous, shared that the indie horror film is “relevant to today’s issues of a global pandemic, reality shows, isolation, Only Fans, and obsession.” 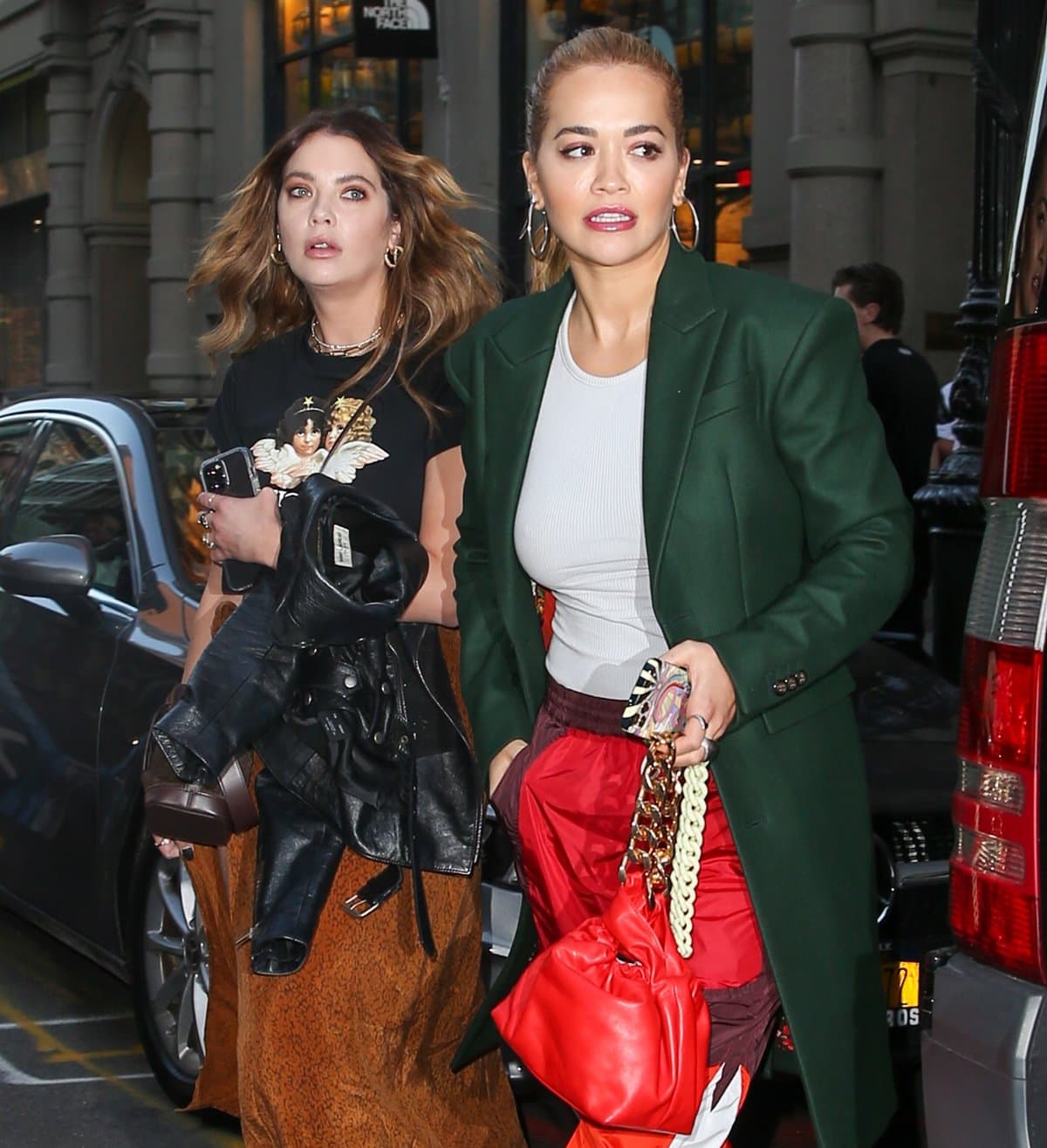 These two women have more in common than their upcoming film together. Paris is no stranger to the spotlight, growing up as a socialite and heiress. Paris’s great-grandfather, Conrad Hilton, is the founder of the Hilton hotel chain.

With fame, there is an unfortunate price to pay in today’s world – everyone believes they have a right to access you at all times.

On a recent episode of Paris’s podcast, This is Paris, Ashely and Paris discussed the struggles they’ve endured in the name of fame.

Ashley spoke about the overwhelming nature of the paparazzi, “It almost causes car wrecks. They go through stoplights and all this stuff. They scream horrible stuff at you, they just bother you to get a reaction. It gives me so much anxiety.”

One of Ashley’s looks was a Saint Laurent Spring 2018 patterned playsuit with a deep plunging neckline and a sash around her center. 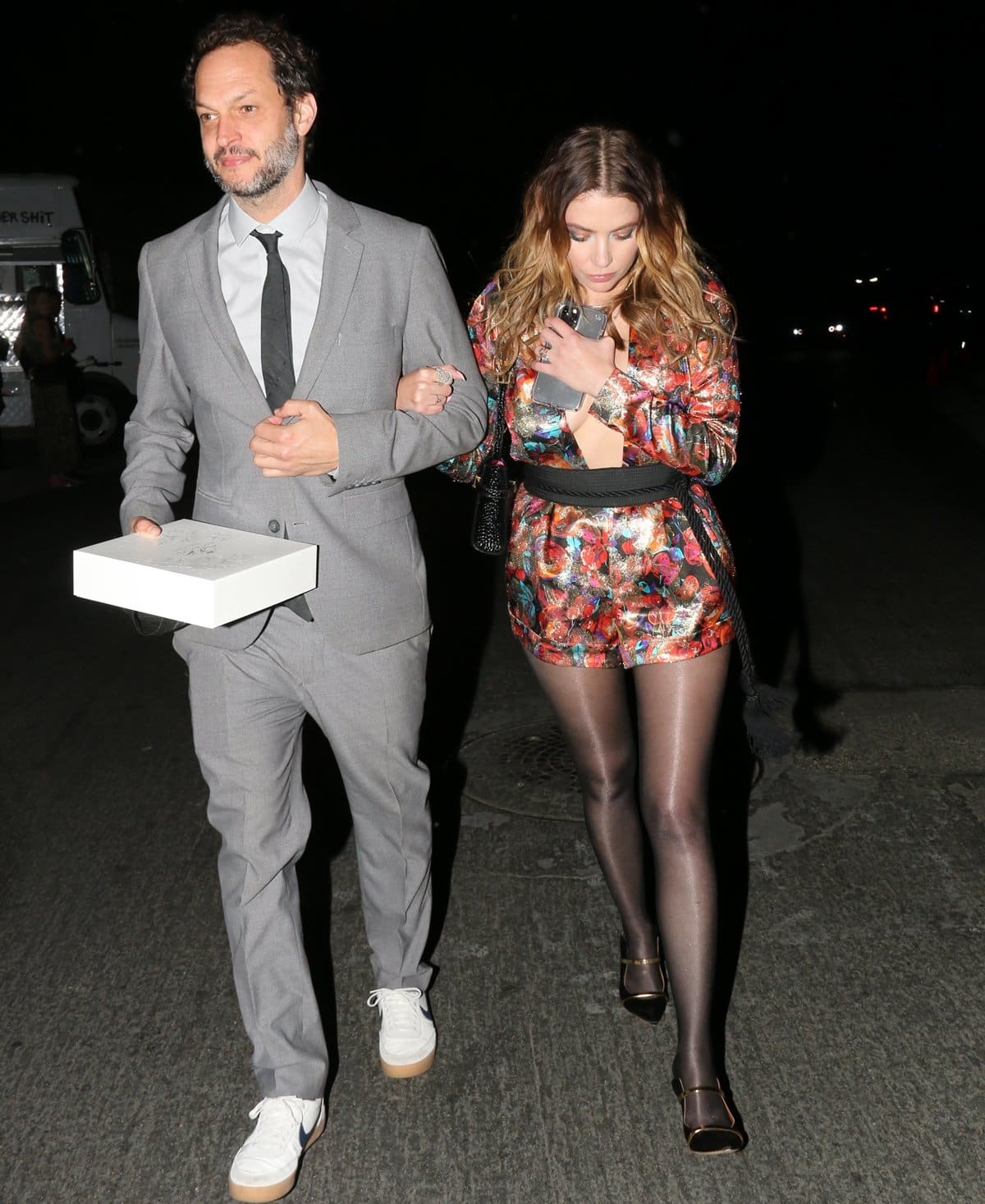 She paired it with black tights, black heels, and loose waves in her hair. The actress looked gorgeous showing off her toned body and cleavage.

Another of Ashley’s wedding looks was a sequined bustier, again with a plunging neckline, paired with a floor-length, high-slit satin skirt. 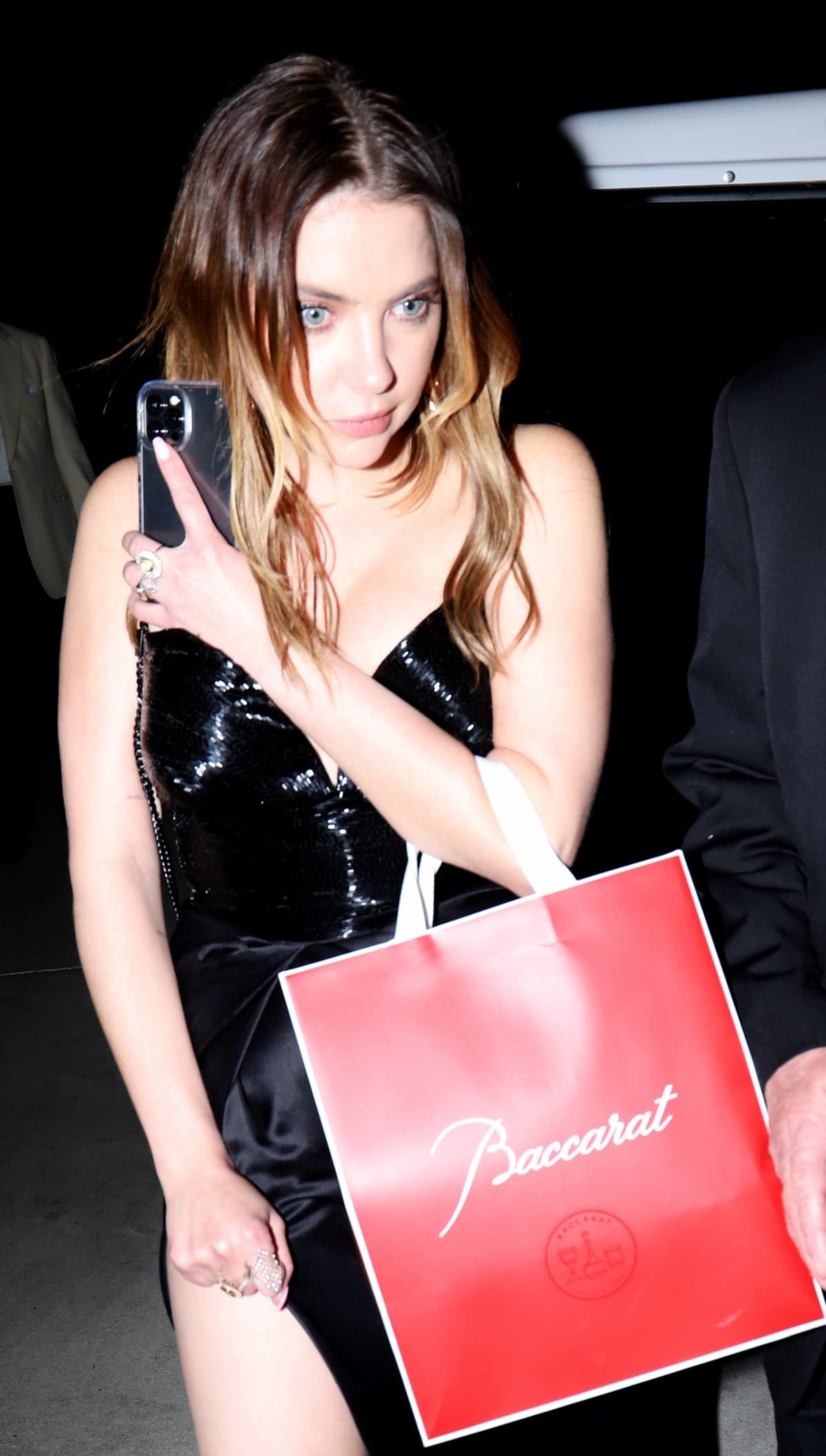 She paired this with the Kate chain bag from Saint Laurent and satin slingback pumps from the same designer.

Ashley Benson’s style is always turning heads. She was at the amfAR Gala in Los Angeles on November 4, 2021, where she wore a beautiful Moschino Fall 2016 dress. 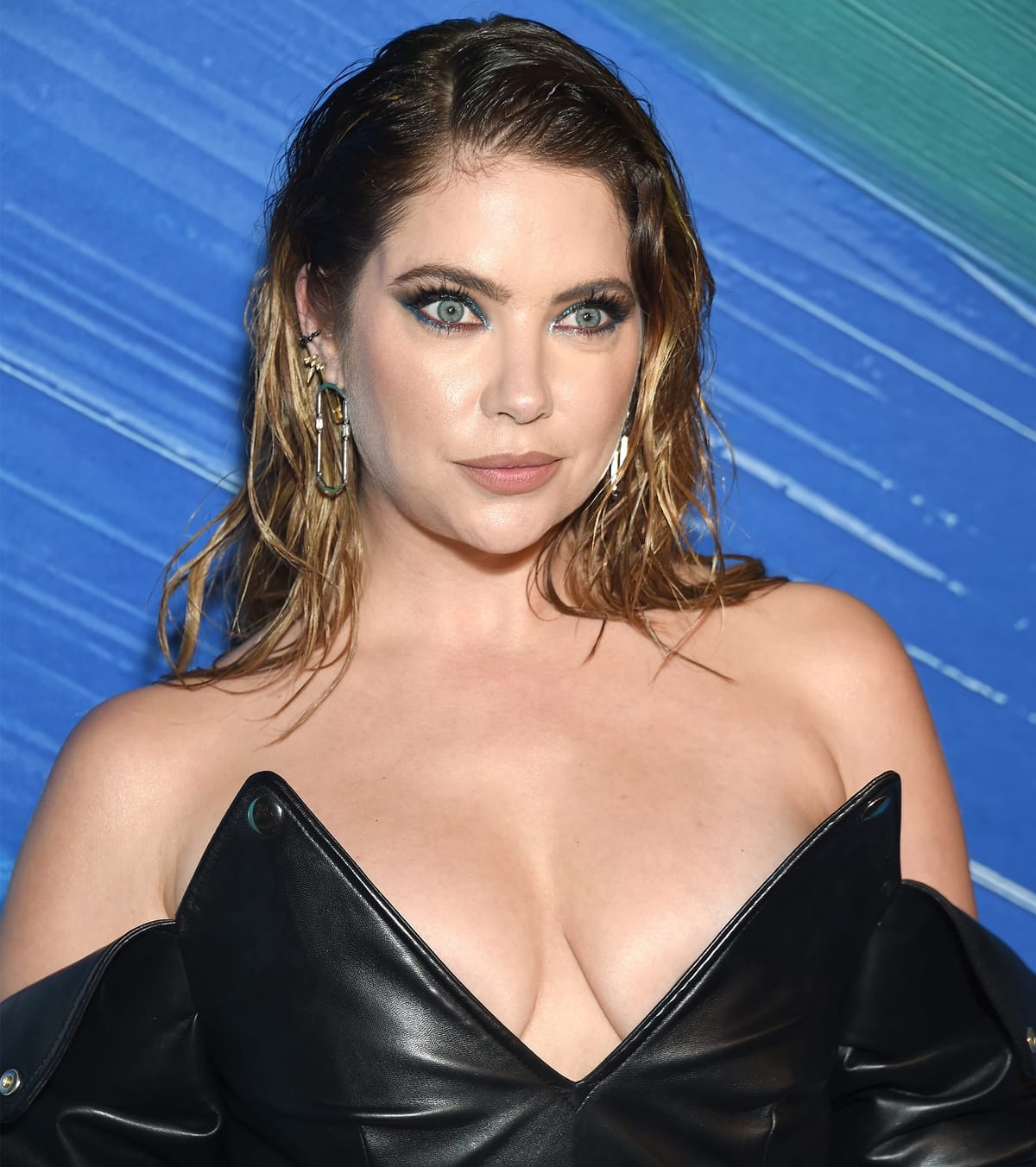 The black off-the-shoulder top portion of the dress pairs with a cobalt blue skirt for a bold look. She wore Saint Laurent heels with her hair in wet-looking loose waves. 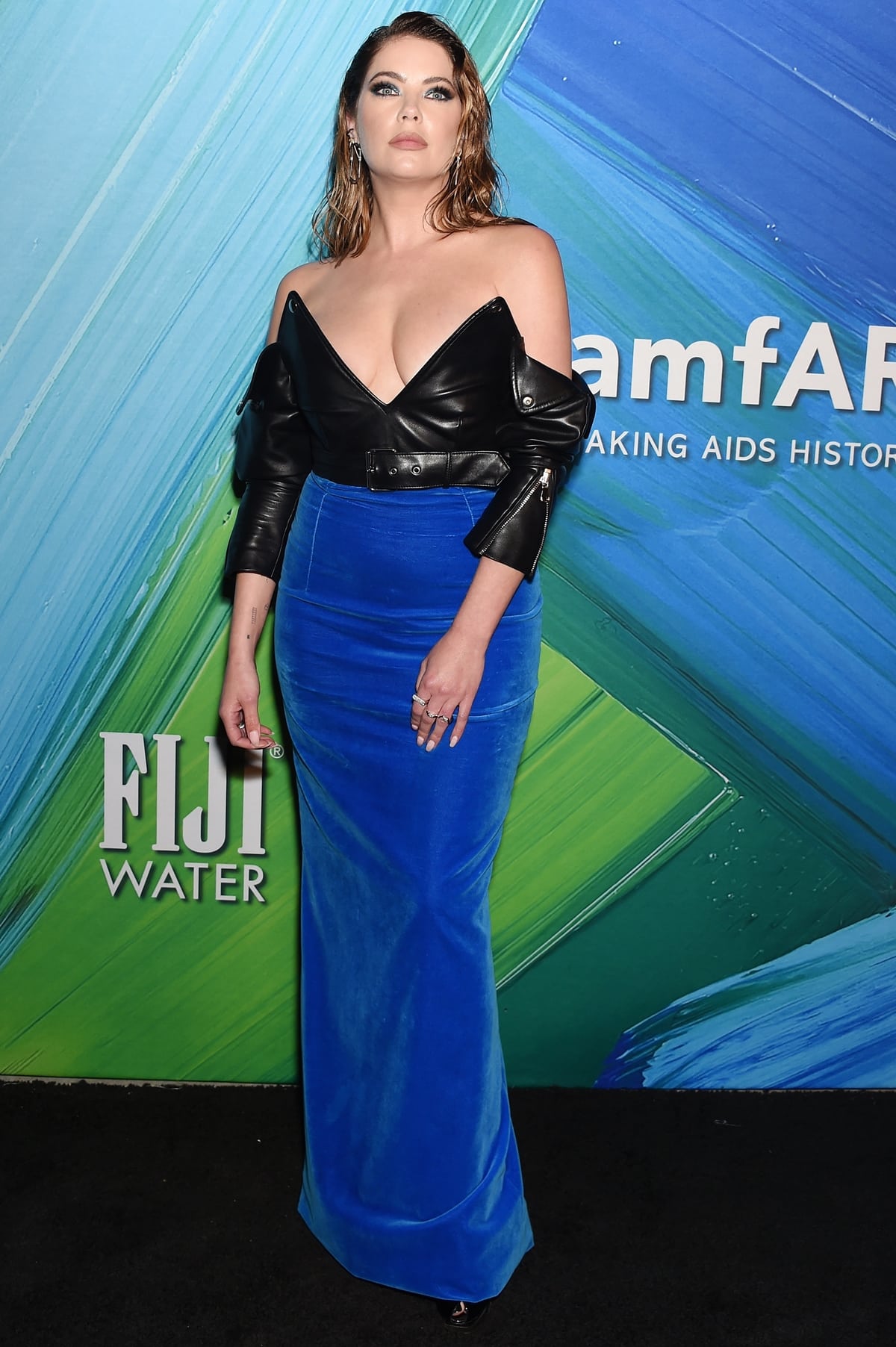 Ashley wowed in a floor-length black coat with white fringe detail. Underneath, she wore a pair of barely-visible white pants and a small black crop top. 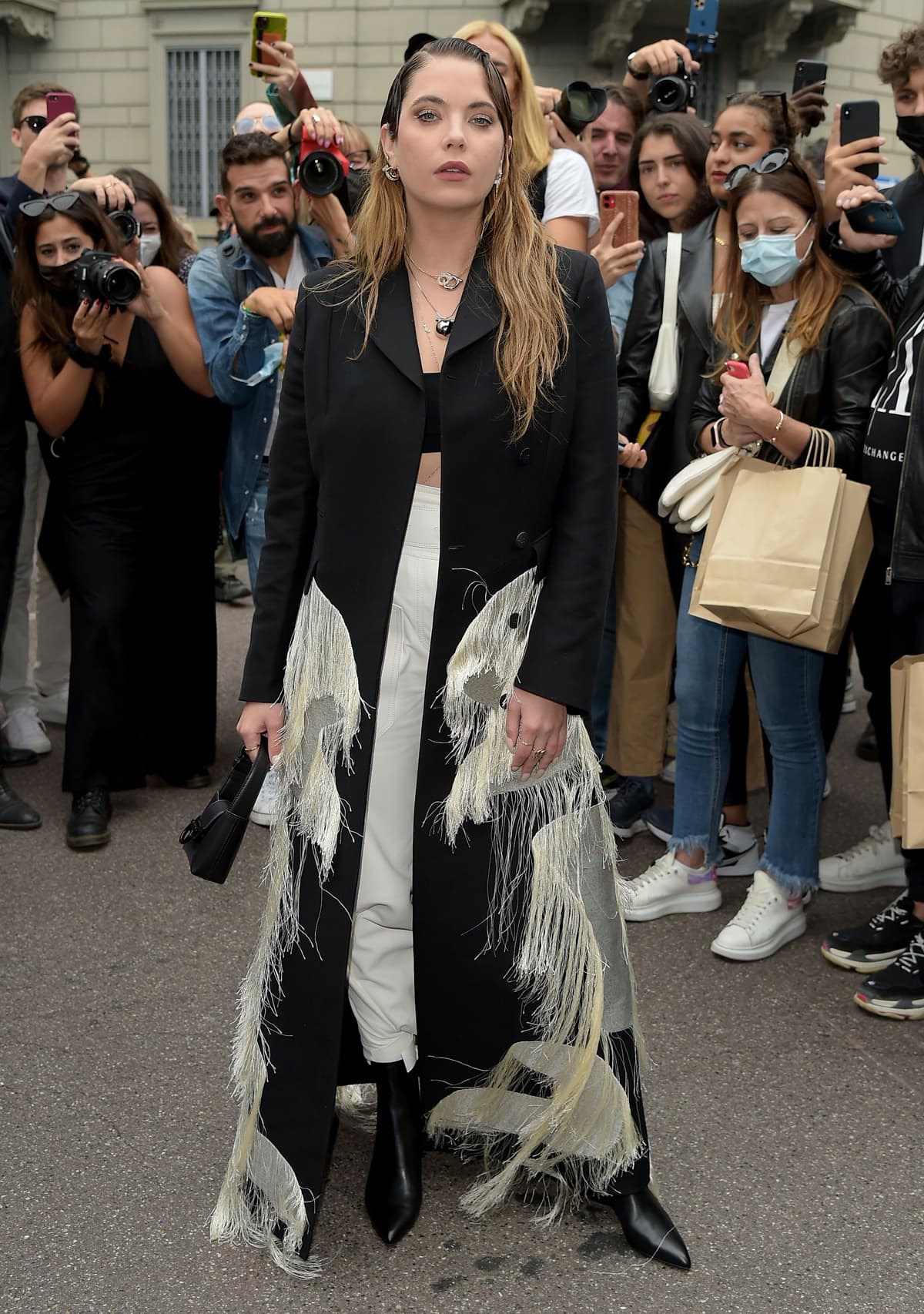 She paired this look with black shoes, a small black bag, various jewelry, and a partially-wet hair look.

We can’t wait to see what Ashley Benson wears next. 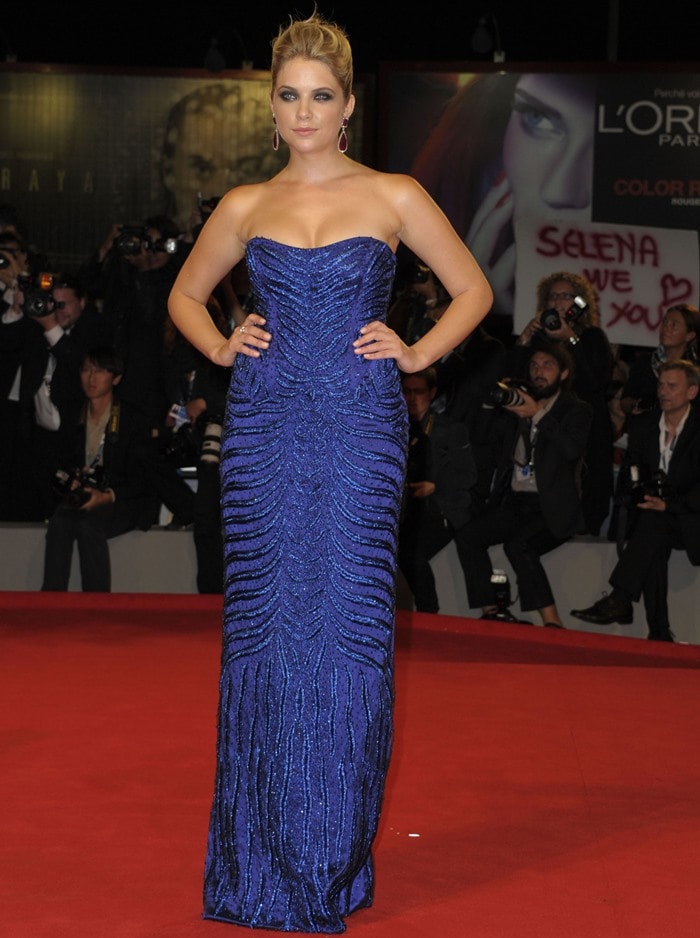 In September 2012, we featured actress Ashley Benson in a pair of ultra-chic Sergio Rossi pumps at the Toronto Film festival. A few days earlier, she hit the red carpet in another great pair of pumps.

This time Ashley was seen at the 69th Venice Film Festival in Venice, Italy attending the ‘Spring Breakers’ premiere in Jimmy Choo.

She also rocked a much more glamorous evening look in this instance compared to her peplum dress and black pumps in Toronto. 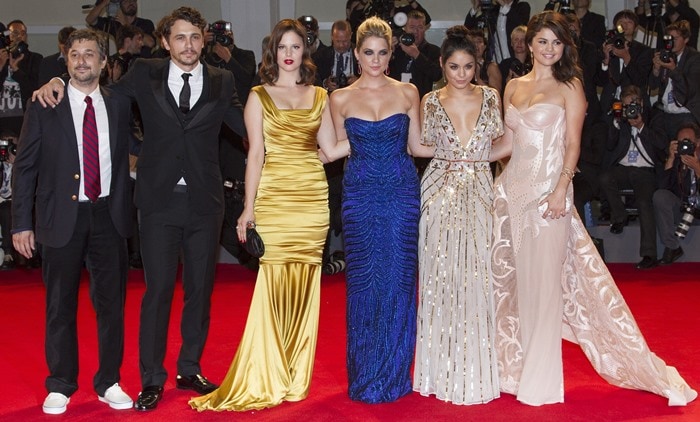 They’re an ideal heel for formal occasions like the one Ashley attended. However, the price tag ($2,495) at Net-A-Porter may keep them out of most shoe closets: 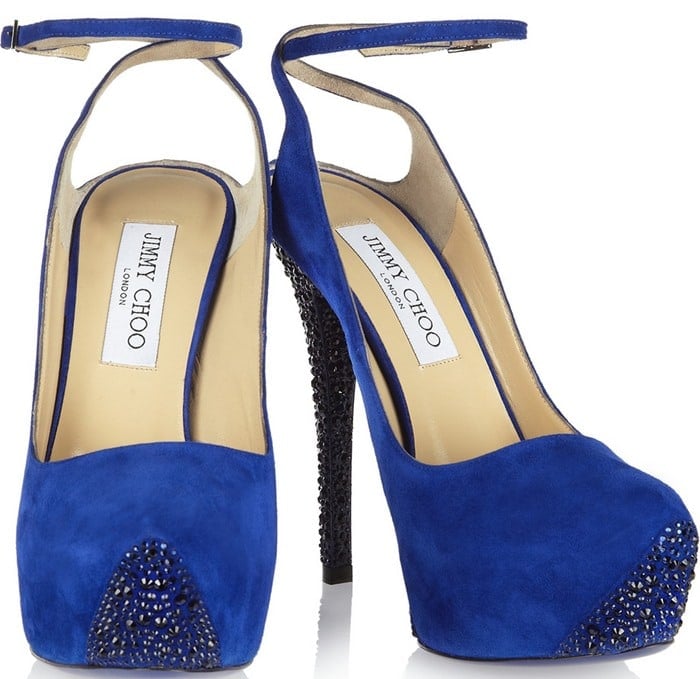 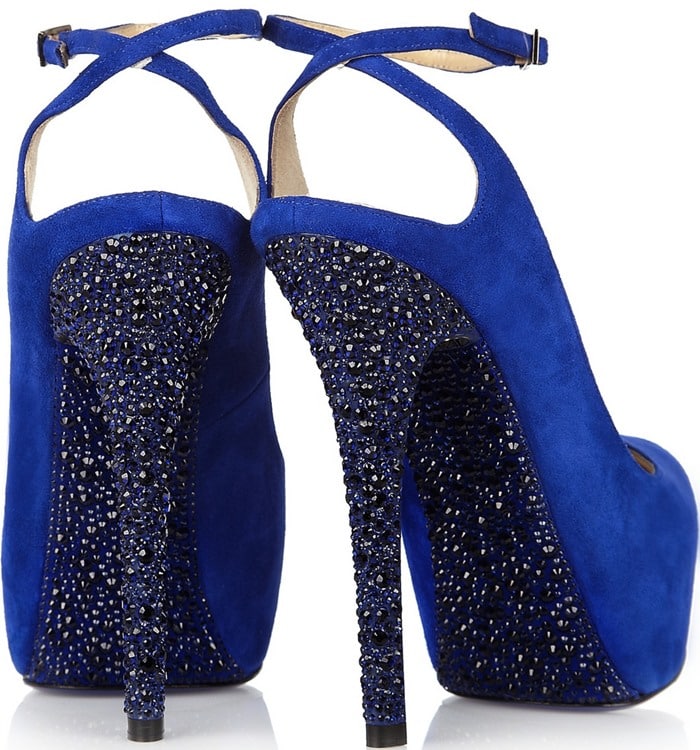