Attending a wedding party on Friday night in Miami, Kendall Jenner introduced a new-fashioned way of dressing up for a wedding.

The 26-year old supermodel flaunted a “barely there” outfit at her friend Lauren Perez’s wedding to David Waltzer.

Even though Kendall looked drop-dead gorgeous in her outfit, her social media fans labeled her fashion as “unequivocably inappropriate”.

One Instagram user wrote: “I love Kendall, but, is she in love with the groom or something?” 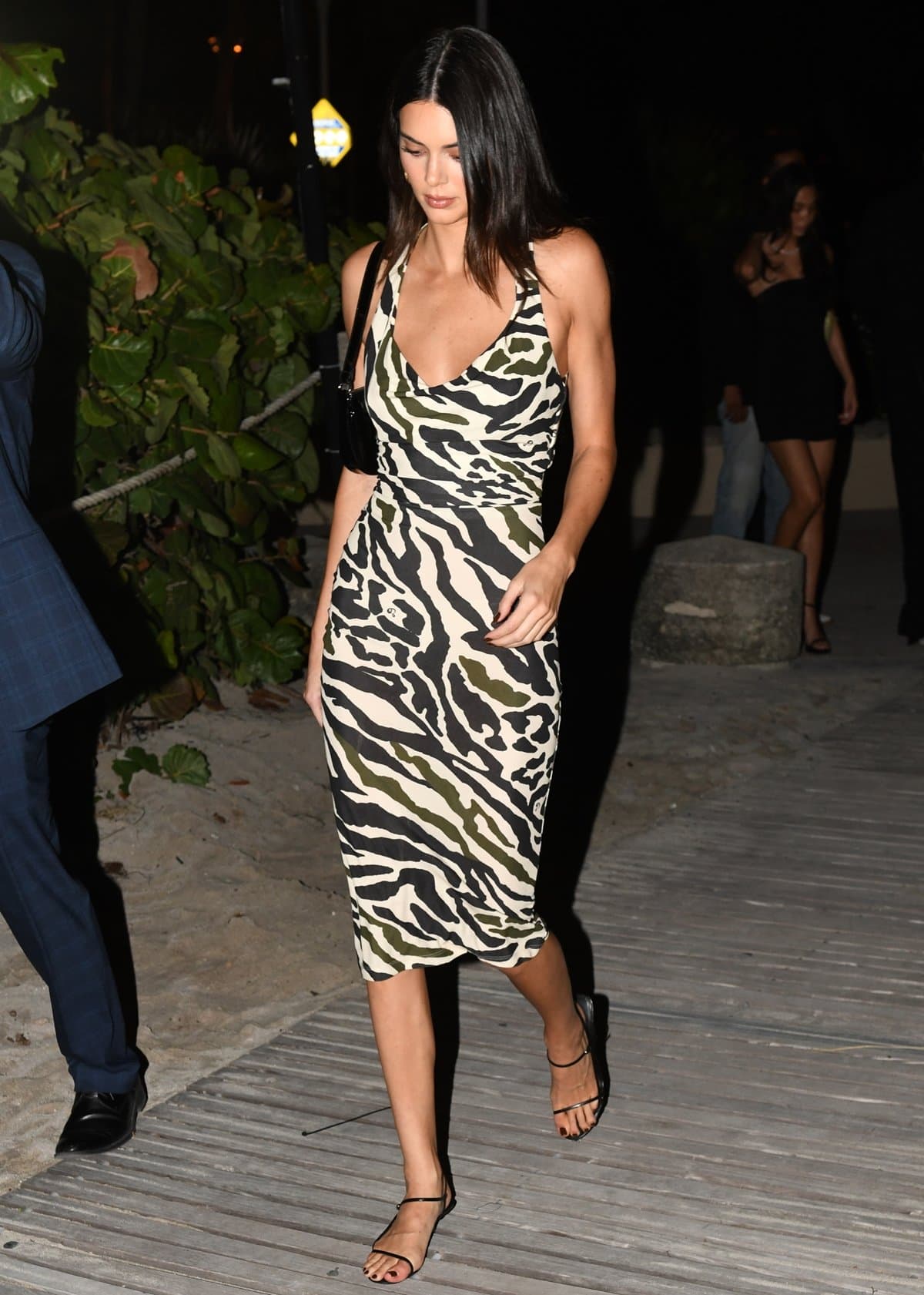 “Wow, completely inappropriate for a wedding. Sheesh. At a wedding? The dress is a moment but not a moment to be had at someone else’s wedding,” added another.

“It’s hard to believe she is friends with the bride if this was the outfit she went with,” someone also commented.

Kendall only wore the bold and adventurous black diamond-cutout two-piece maxi dress from Mônot for the reception. She wore an elegant blue silk bridesmaid gown during the wedding ceremony.

For another wedding party dinner, she wore an animal print dress from Dundas. You can buy a similar wrap-effect zebra-print crepe de chine mini dress from the same designer for $1,250 at Net-A-Porter. She styled her dress with The Row Bare sandals and a By Far Rachel bag. 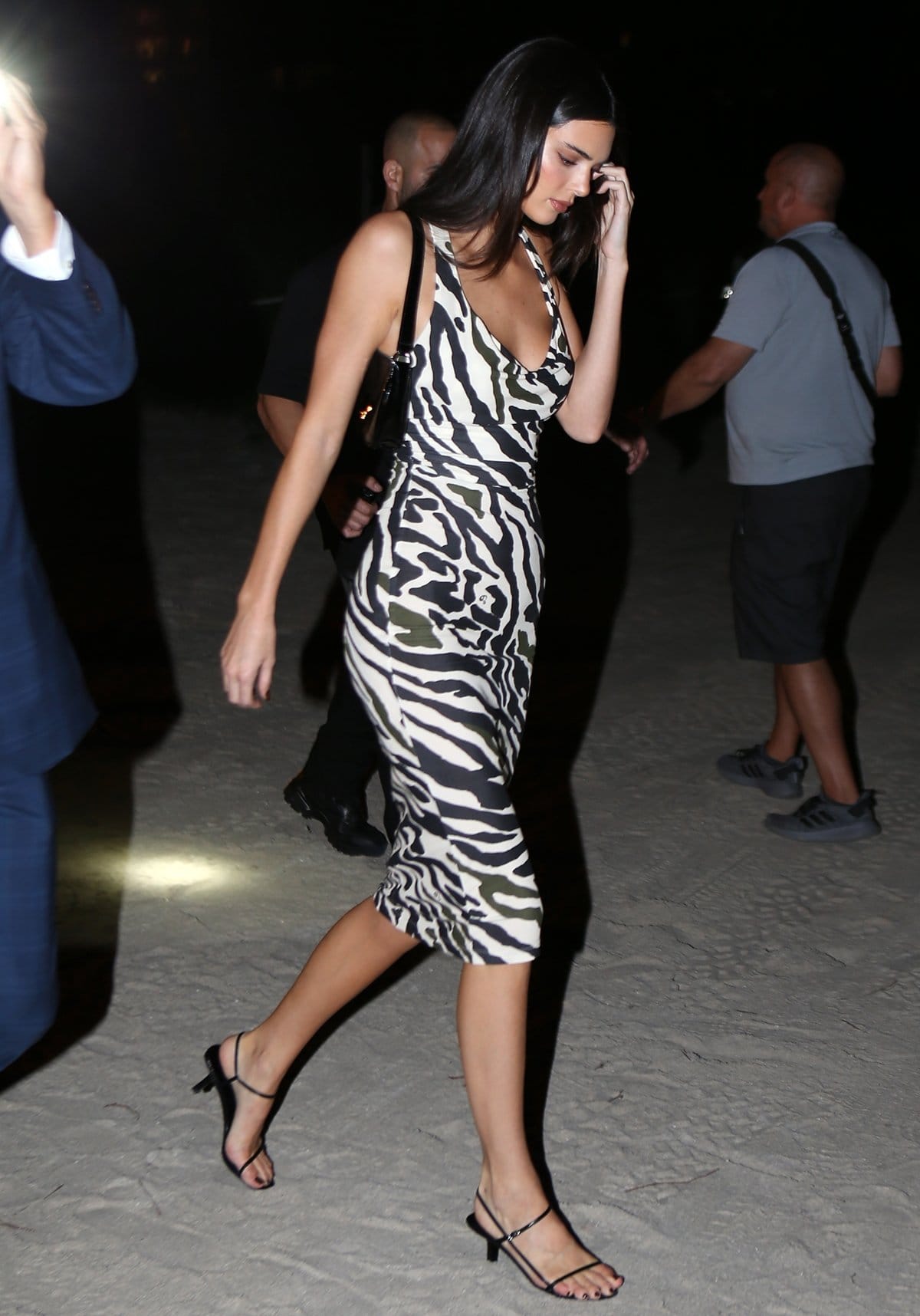 Also at the party held in Miami Florida were her long-time friends, Hailey Bieber and Bella Hadid, along with Fai Khadra. All four of them drew attention to their dazzling and stylish looks.

It was impossible to take one’s gaze away from the lavish celebrities. 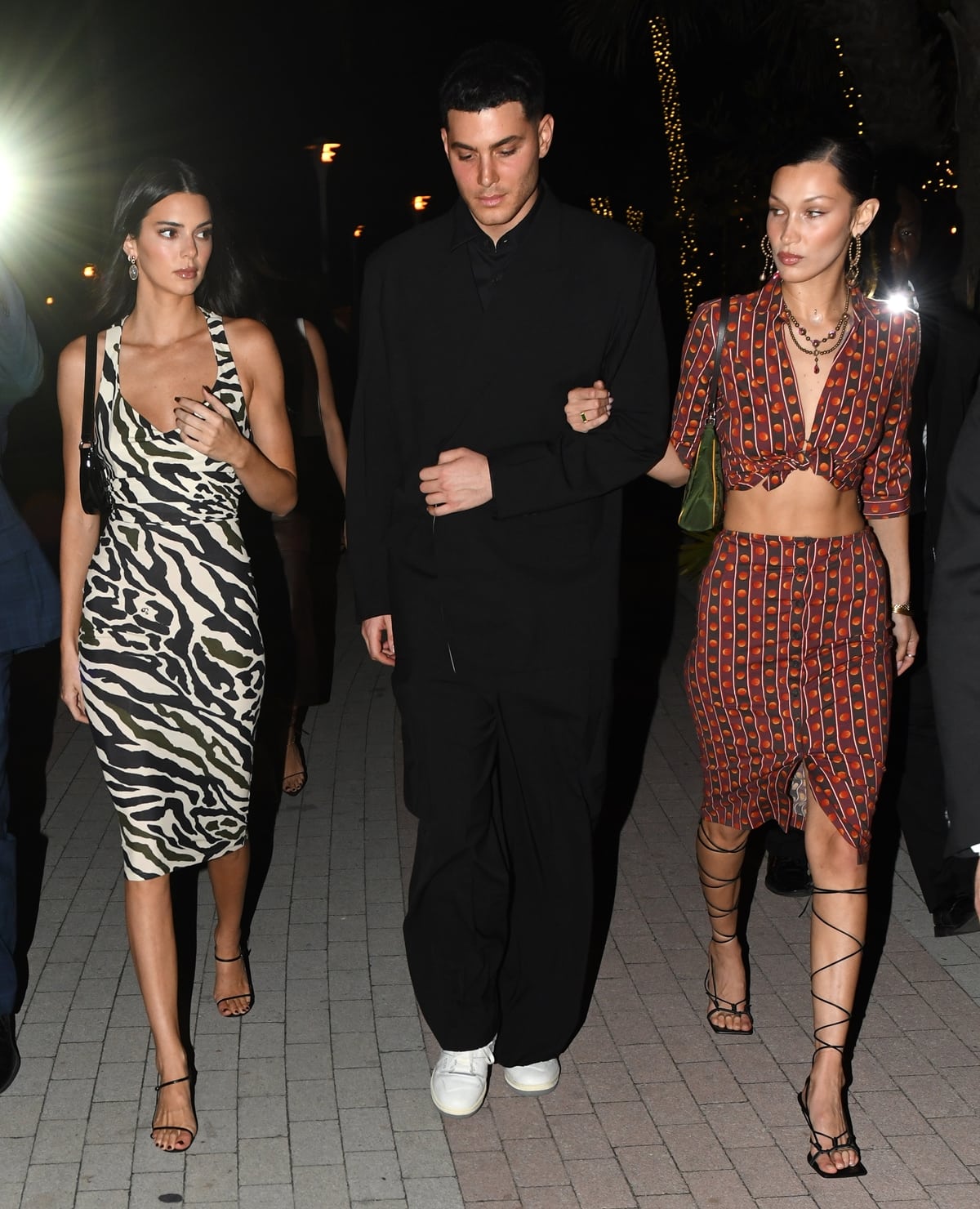 Earlier last week, the stars were all over the press opening up about their personal affairs.

First up, on November 8, Kendall and Kim Kardashian broke their silence about the Astroworld Festival concert tragedy.

Posts from their social media accounts expressed their brokenheartedness from the “mass casualty incident” that happened at the concert of Kylie Jenner’s partner, Travis Scott.

Both of them were at the concert and did not get injured during the stampede. 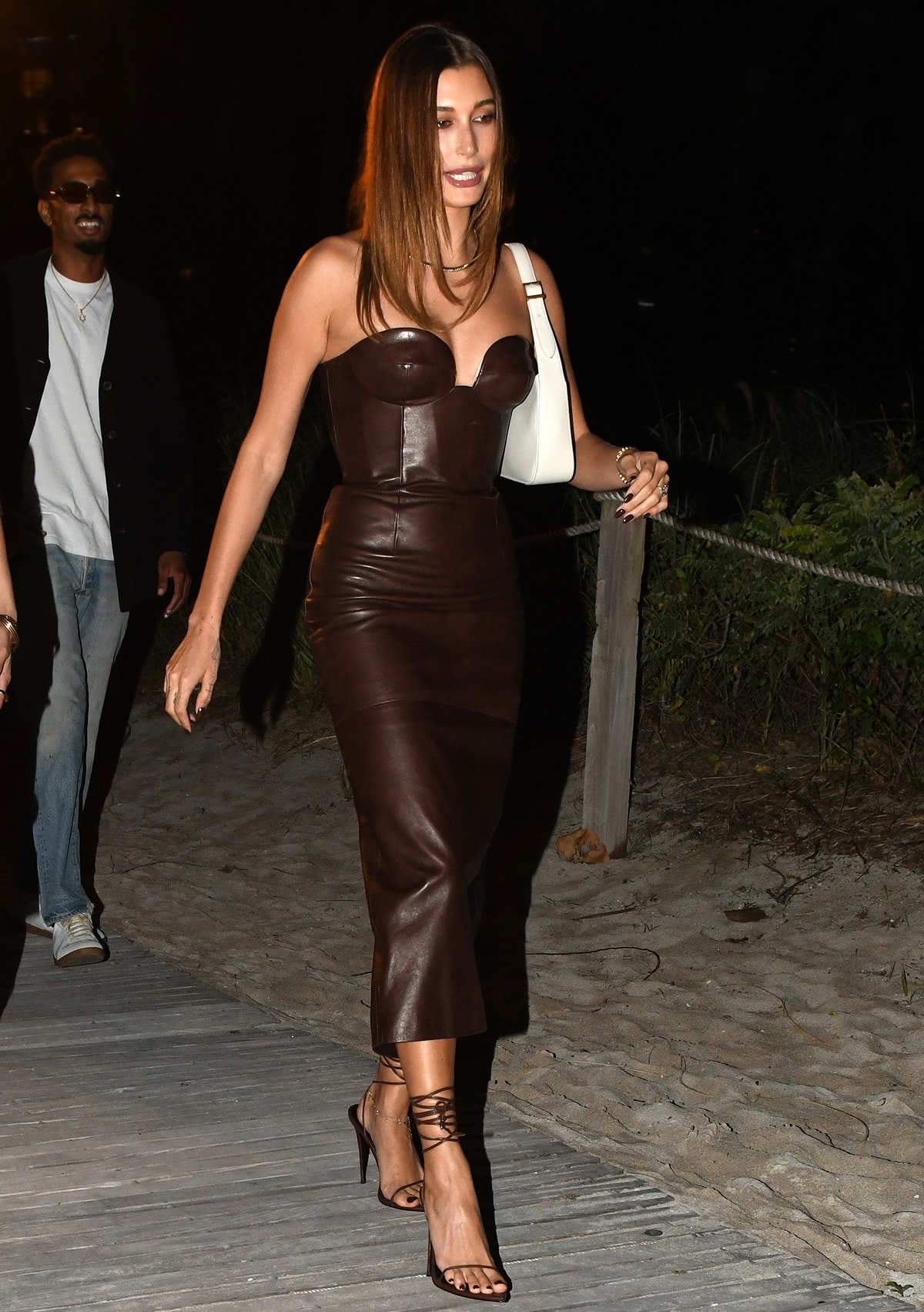 “I’m still at a loss for words over the news from Astroworld. I’m truly broken for the families that have lost loved ones and my prayers go out to everyone involved,” Kendall stated on her Instagram story.

She added: “Sending everyone who has been affected all of my love and wishing them strength during this incredibly devastating and sensitive time.”

Meanwhile, Kim sent her sympathy to the family of the bereaved and those hurt during the event.

“Absolutely heartbroken for the lives who were lost and anyone who was hurt at Astroworld. Just like all of you, our family is in shock by the tragedy. We are keeping all of the victims, families, and loved ones impacted in our prayers for healing – as well as Travis who we know, cares so much about his fans and is truly devastated,” she wrote on her Instagram story. 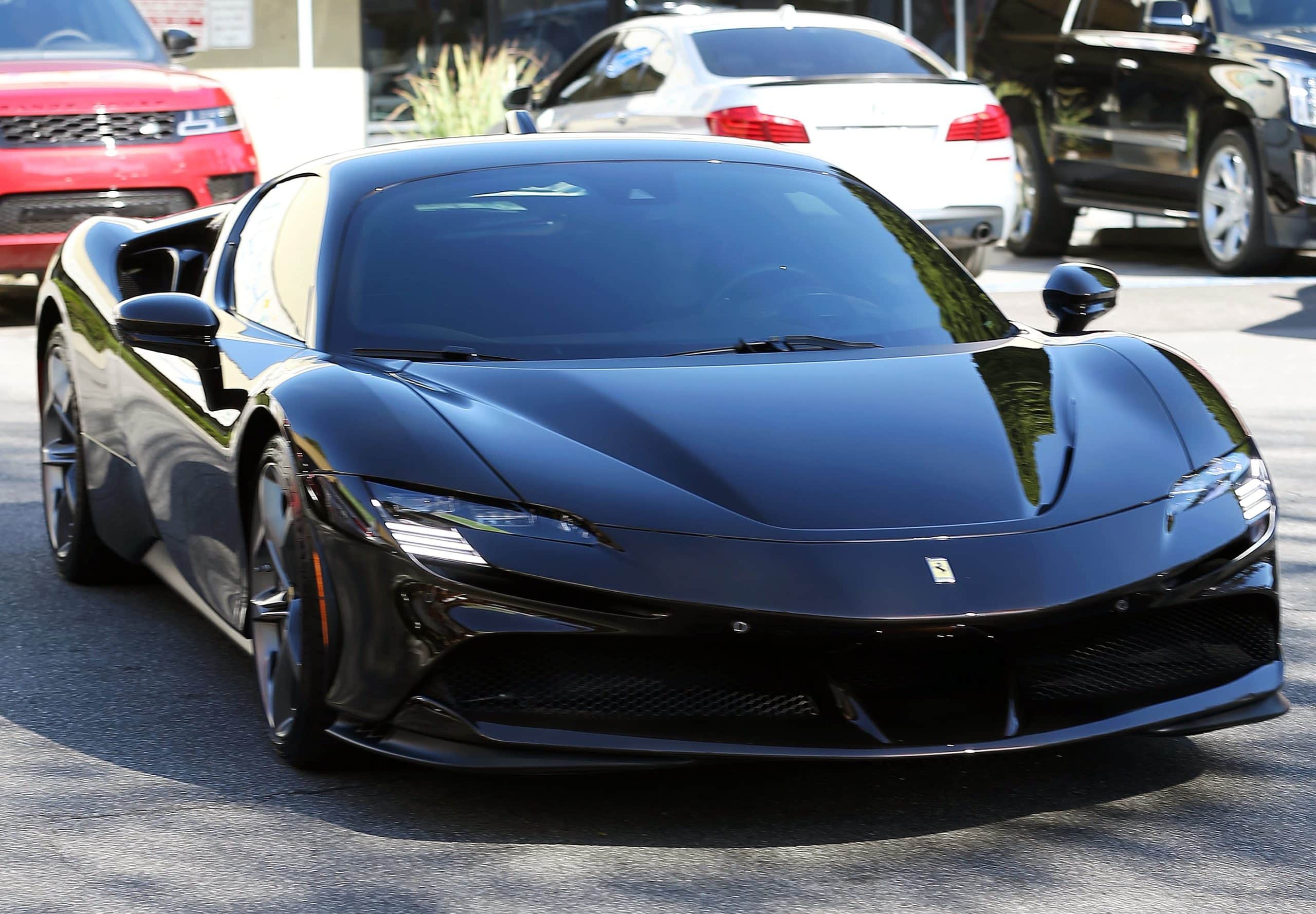 Travis Scott himself also responded through his Twitter account stating his care and compassion for the involved families. He wrote: “I’m absolutely devastated by what took place last night.”

“My prayers go out to the families and all those impacted by what happened at Astroworld Festival,” he added. 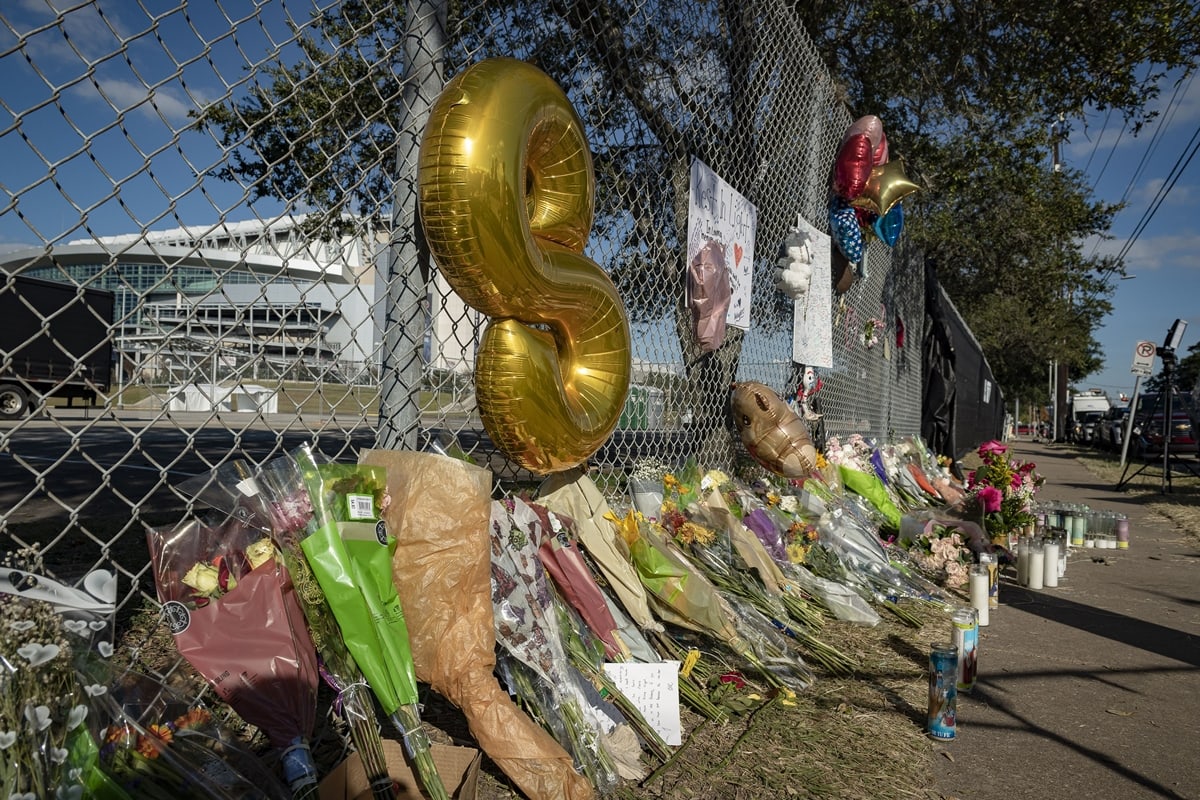 The incident was triggered by the surge of the crowd towards the stage as the rapper performed. The sudden race to the front of people caused the mass panic and stampede.

On the other hand, Bella Hadid talked about her battle with anxiety in an interview last week. She mentioned that in mental health, no two battles are the same because it is an ongoing struggle.

At the same time, Hailey opened up about her marriage with Justin Bieber. Kendall Jenner, an art connoisseur? In July 2015, it looked like the then 19-year-old was trying to shy away from the vulgarity of her highly publicized, rumor-mill-infested life to a more sophisticated, low-key one. Perhaps she was trying to escape from all the buzzing around her now she-dad Caitlyn Jenner? Kendall Jenner accessorized with a belt from B-Low (Credit: Will Alexander / WENN)

Perhaps, this is really just the young model coming into her own, what with all the exposure to fashion and art geniuses such as Karl Lagerfeld and Olivier Rousteing, as well as creative publications mounting her shoots such as the Dazed magazine. The older Jenner sibling was spotted leaving her hotel in London to visit an Andy Warhol exhibit. She even uploaded a photo of her favorite piece to Instagram. Kendall wore a gorgeous striped fringed dress from the Alice McCall Spring 2015 collection, which she paired with a tote from Givenchy. Kendall Jenner visiting Sotheby’s auction house on Bond Street before stopping off to see Lewis Hamilton at the Claridge’s hotel in London, England, on July 1, 2015 (Credit: Will Alexander / WENN)

She accessorized with a belt from B-Low and tidied up her afternoon look with sunglasses from Saint Laurent and boots from One Teaspoon. 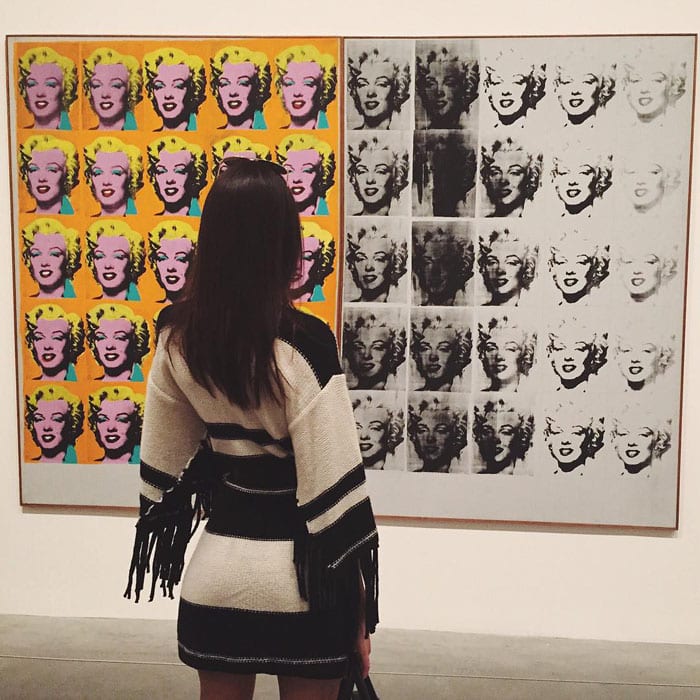 Kendall Jenner showing off her interest in Andy Warhol’s works, perhaps influenced by a Warhol-inspired fashion video she did with “Dazed” magazine back in December 2014 (Credit: Kendall Jenner’s Instagram)

Kendall’s boots have already been sold out, but you can check out other similar designs from the Australian brand One Teaspoon below.