When it comes to long-term relationships, Ellen DeGeneres and Portia de Rossi spring to mind. The twosome first met at a party in 2000 and were friends until 2004.

After being friends for a while, they both realized that they had more than just friendship in mind. So, they began dating after seeing each other again at the VH1 Big in ’04 awards show.

Portia de Rossi credits her relationship with Ellen as boosting her self-esteem enough to reveal herself as being gay publicly.

After dating for four years, Ellen DeGeneres and Portia de Rossi shattered stereotypes when they married in August 2008. They are currently still happily married and do not have any children.

The Start of Ellen and Portia’s Relationship

A mutual friend introduced Ellen DeGeneres and Portia de Rossi at a party in 2000. After that, Ellen and Portia became close friends until 2004, when they began their relationship.

Ellen and Portia’s joint appearance at the awards ceremony caused Ellen to realize that she had romantic feelings for her friend, but Ellen hesitated, believing that Portia was straight. 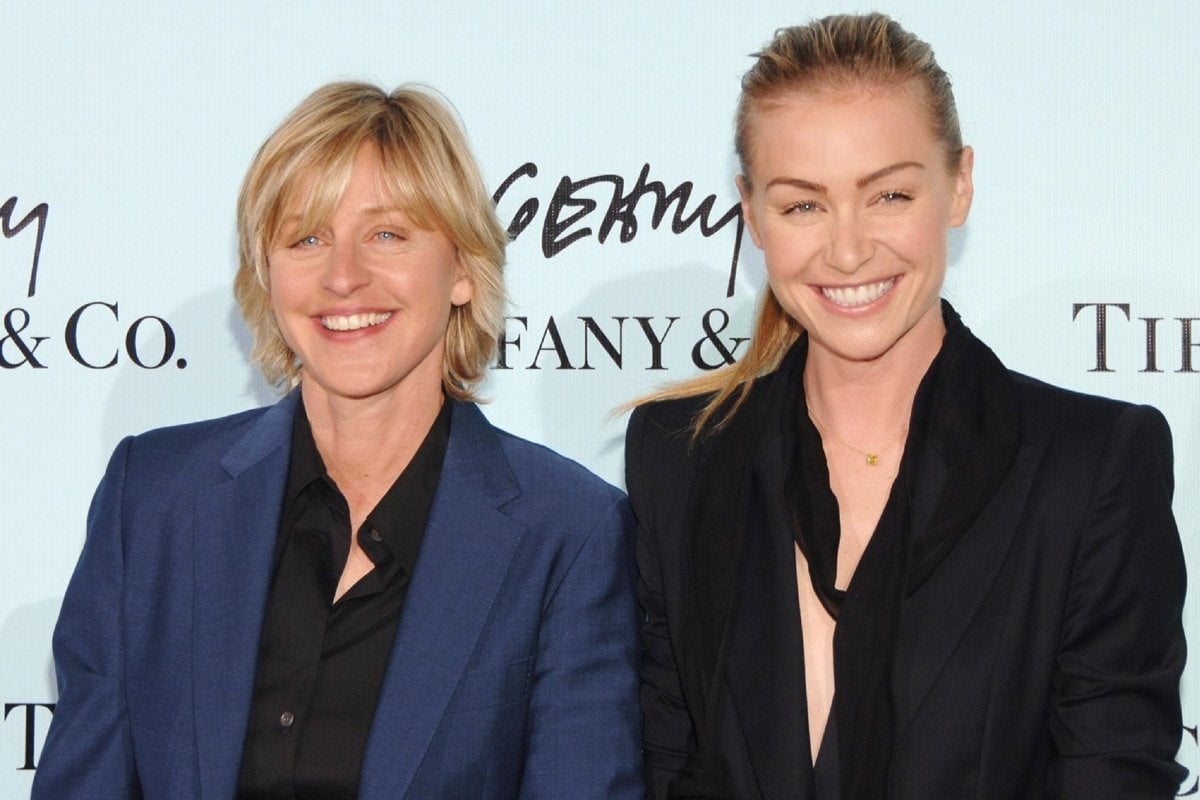 In a “The Ellen DeGeneres Show” episode, Ellen recalled that she was very close with Portia but resisted the idea of dating Portia because of their great friendship.

Ellen kept her feelings to herself, but Portia knew Ellen had some kind of romantic interest in her. However, Ellen was so afraid of being rejected that she decided not to tell Portia how she felt about her.

Ellen said she didn’t have the confidence or security that Portia would love her back.

After Ellen and Portia attended the VH1 Big in ’04 awards show, Ellen started calling Portia more frequently. Ellen revealed that Portia was extremely kind and always supportive, but Ellen still couldn’t work up the courage to ask Portia out. 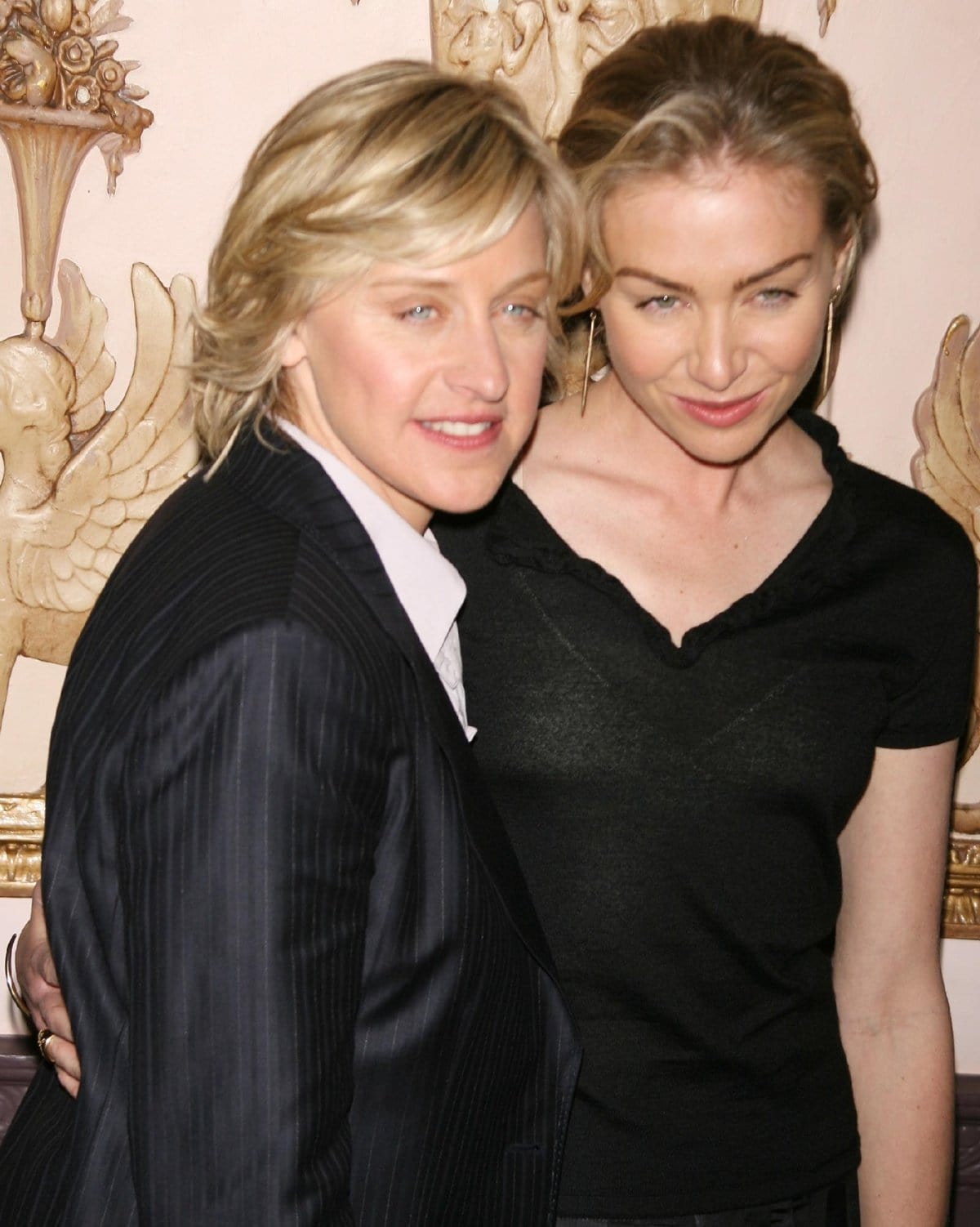 Ellen DeGeneres and Portia de Rossi first met at a party in 2000 and started dating in 2004 (Credit: PNP / WENN)

Thankfully, she did, and they now have a happy marriage that spans decades.

Ellen’s public announcement boosted her and Portia to be one first same-sex couples to marry in California legally. They were allowed to marry after gay marriage was permitted in California.

Ellen and Portia’s wedding was a massive deal in 2008. Ellen has said their wedding was amazing and that she was overwhelmed by everyone’s support. 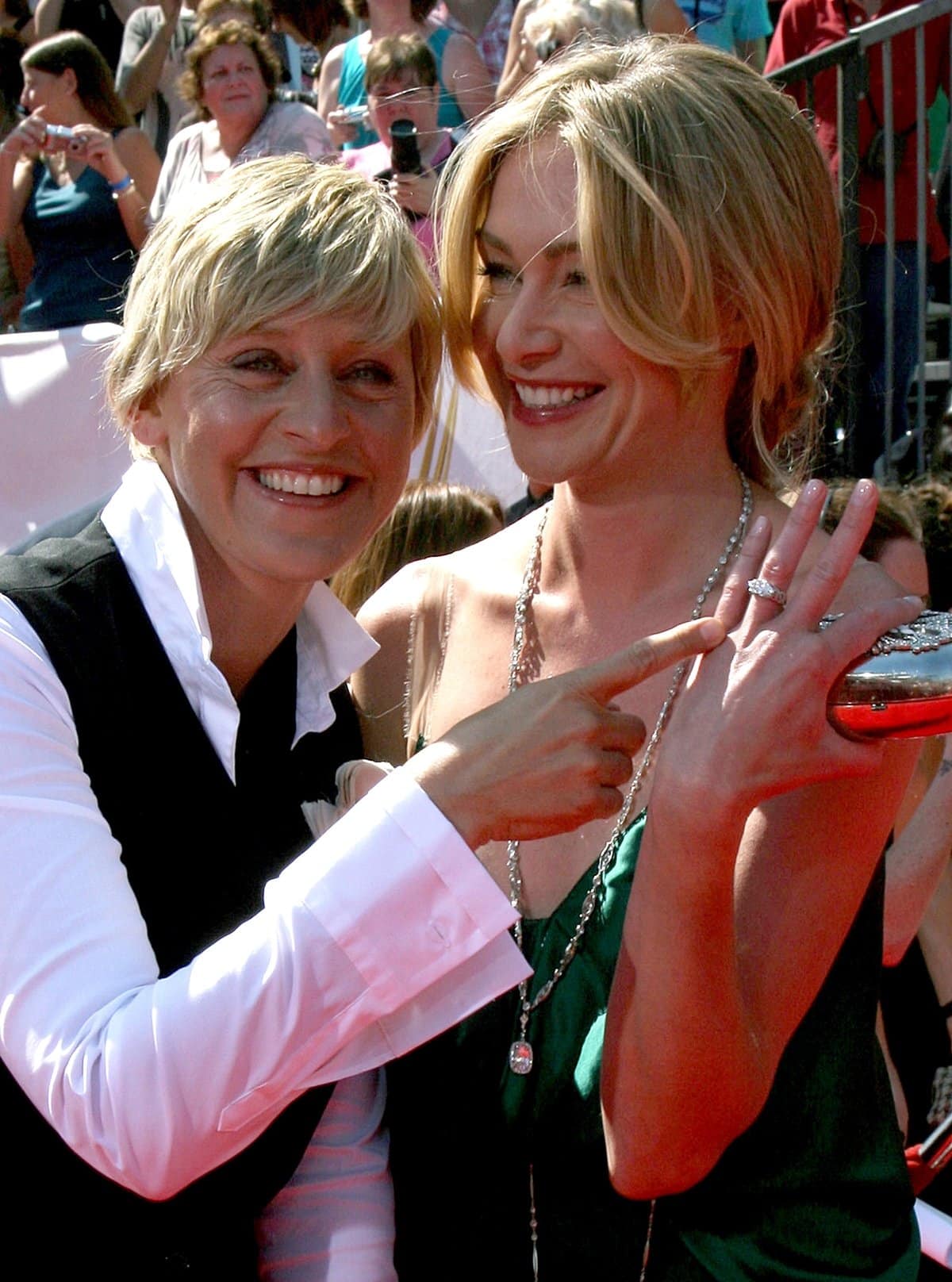 Ellen DeGeneres and Portia de Rossi got engaged in May 2008 and married in August 2008 (Credit: Nikki Nelson / WENN)

Ellen DeGeneres’ public announcement of her sexuality in 1997 made the couple an iconic symbol for homosexual couples everywhere.

Ellen’s decision to marry Portia de Rossi in 2008 spoke volumes because Ellen wasn’t just an entertainer who happened to be gay; she was one of the first actresses who came out as gay to achieve massive success.

In addition, Ellen’s coming out allowed her to be an idol for many other stars who followed suit after Ellen publicly announced that she was gay.

The American comedian said that her decision to come out in 1997 had a negative impact on her career. However, it hasn’t stopped her from becoming a household name.

From 1996 to 1999, De Rossi was married to documentary filmmaker Mel Metcalfe. Their marriage was initially part of a plan for Portia to obtain a green card.

However, she did not follow through with the idea of getting a green card just because she was married. “It just obviously wasn’t right for me,” she said about her marriage to Metcalfe in an interview with Good Morning America.

Before dating Portia, Ellen was linked to actress Anne Heche. After her relationship with Heche, Ellen dated a photographer, Alexandra Hedison, for three years until she started dating Portia.

As Ellen mentioned in her show, she reminded herself that there was nothing wrong with being gay. Ellen realized that it was perfectly normal for her to love another woman.

Ellen has also found happiness in her career and family life. An inspiration to many because she overcame the fear of coming out to express herself publicly, she truly changed history with her step forward and inspired others like Portia de Rossi. 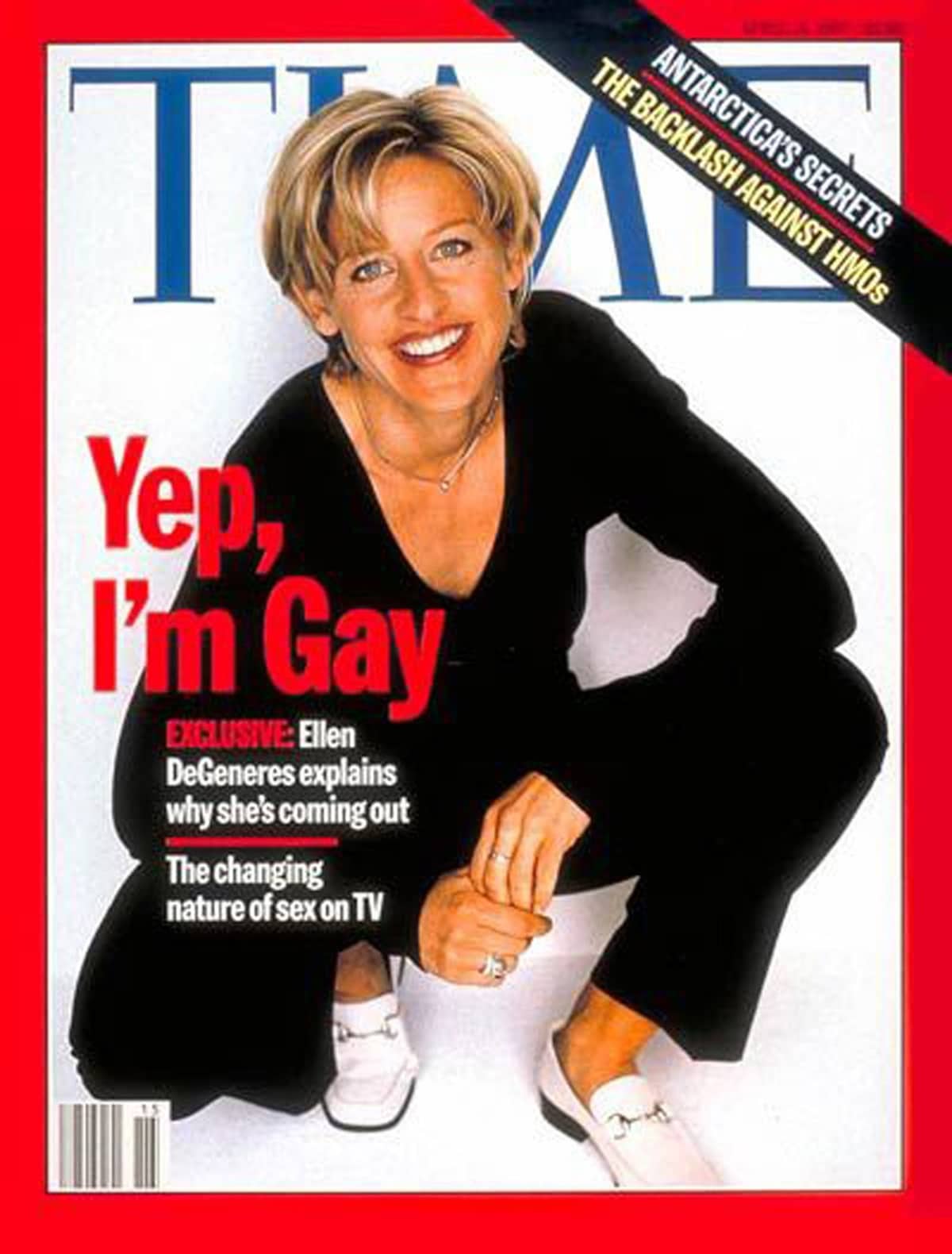 Ellen DeGeneres came out on the cover of TIME magazine in 1997 with the headline ‘Yep, I’m Gay’ (Credit: TIME)

“I decided this was not going to be something that I was going to live the rest of my life being ashamed of,” DeGeneres told Diane Sawyer on 20/20 in April 1997.

In addition to earning several Emmy awards for her role as neurotic bookstore owner Ellen Morgan, in 2002 she was honored with a star on the Hollywood Walk of Fame.

The television host continues to star in various films and TV shows while running her popular talk show, “The Ellen DeGeneres Show.” 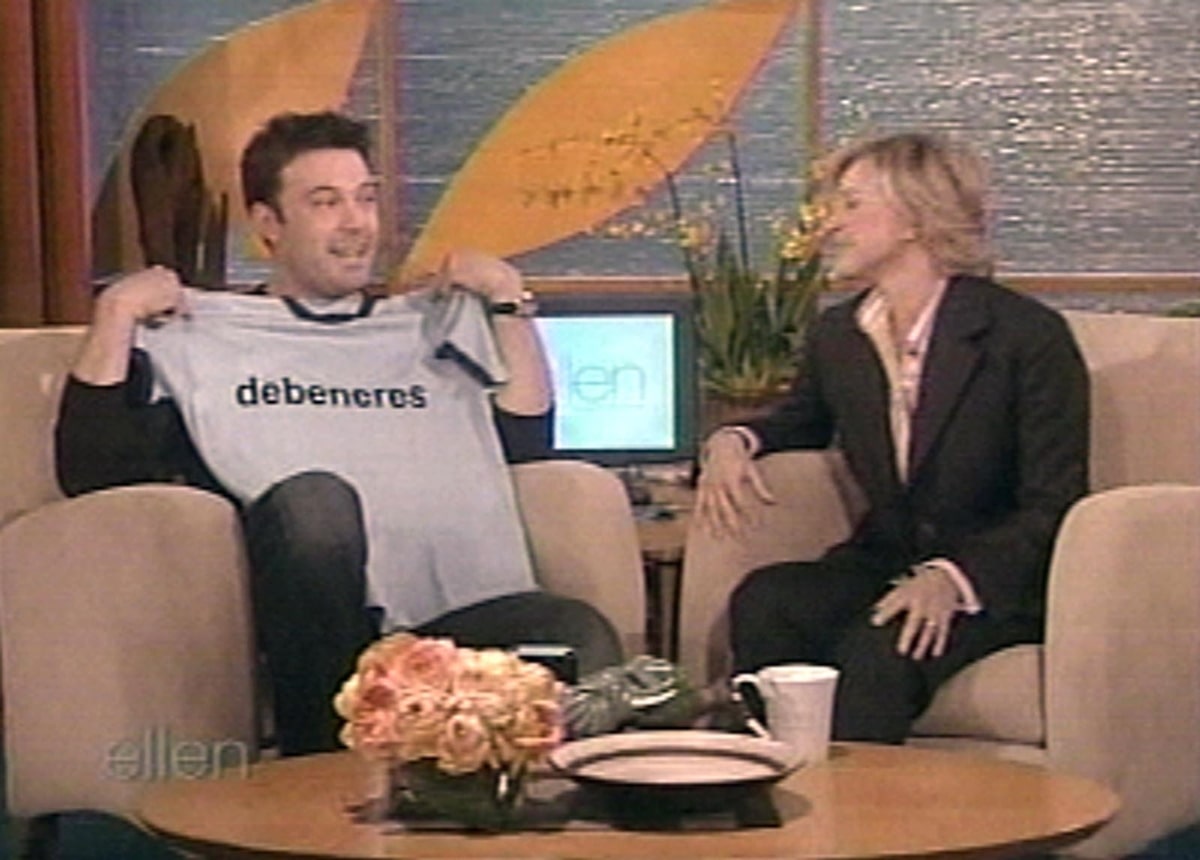 Ben Affleck on the Ellen DeGeneres Show in 2004 gets shown a T-shirt with a blend of their names (Credit: WENN)

Other notable roles include voice work in the 2003 Pixar film “Finding Nemo” and “Finding Dory.” She also produced “Nancy Drew and the Hidden Staircase” and “The Smart One.”

Ellen has also released several bestselling audiobooks, including The Funny Thing Is… and Just Being Myself.

In 2020, Ellen faced controversy over how she treats employees of her famous talk show. Ellen was called out publicly for mistreating several of her employees. Ellen later announced that she would host a one-hour special to apologize to all the Ellen staff members she offended. 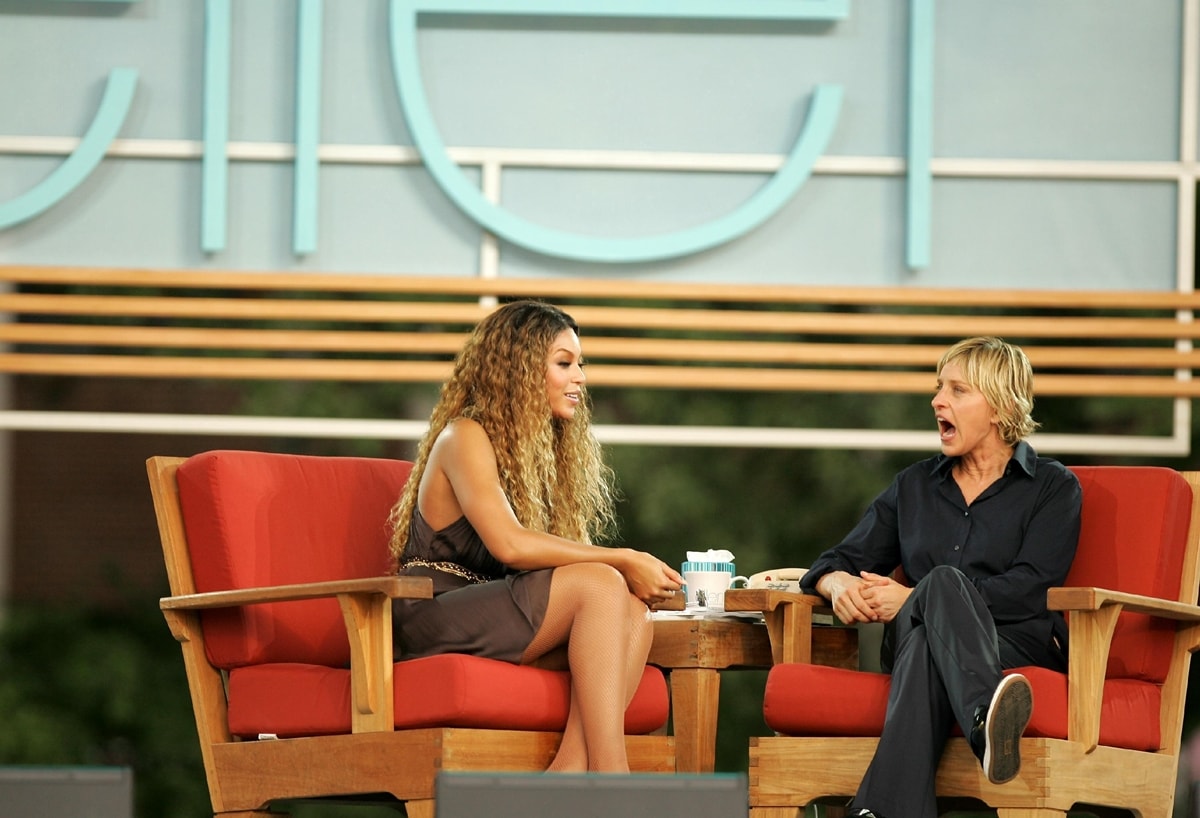 Recently, Ellen came forward and announced that she would soon no longer be doing her show. She said she has been doing her show for 15 years and is ready to retire from this obligation to focus on other things. Her last show will be in 2022.

Ellen DeGeneres’ decision to retire will leave a considerable gap in the entertainment industry because Ellen’s talk show was culturally relevant for so many years.

Portia de Rossi grew up in Australia and studied law at the University of Melbourne. She has appeared in numerous films, including Scream 2, Girl, and Stigmata. 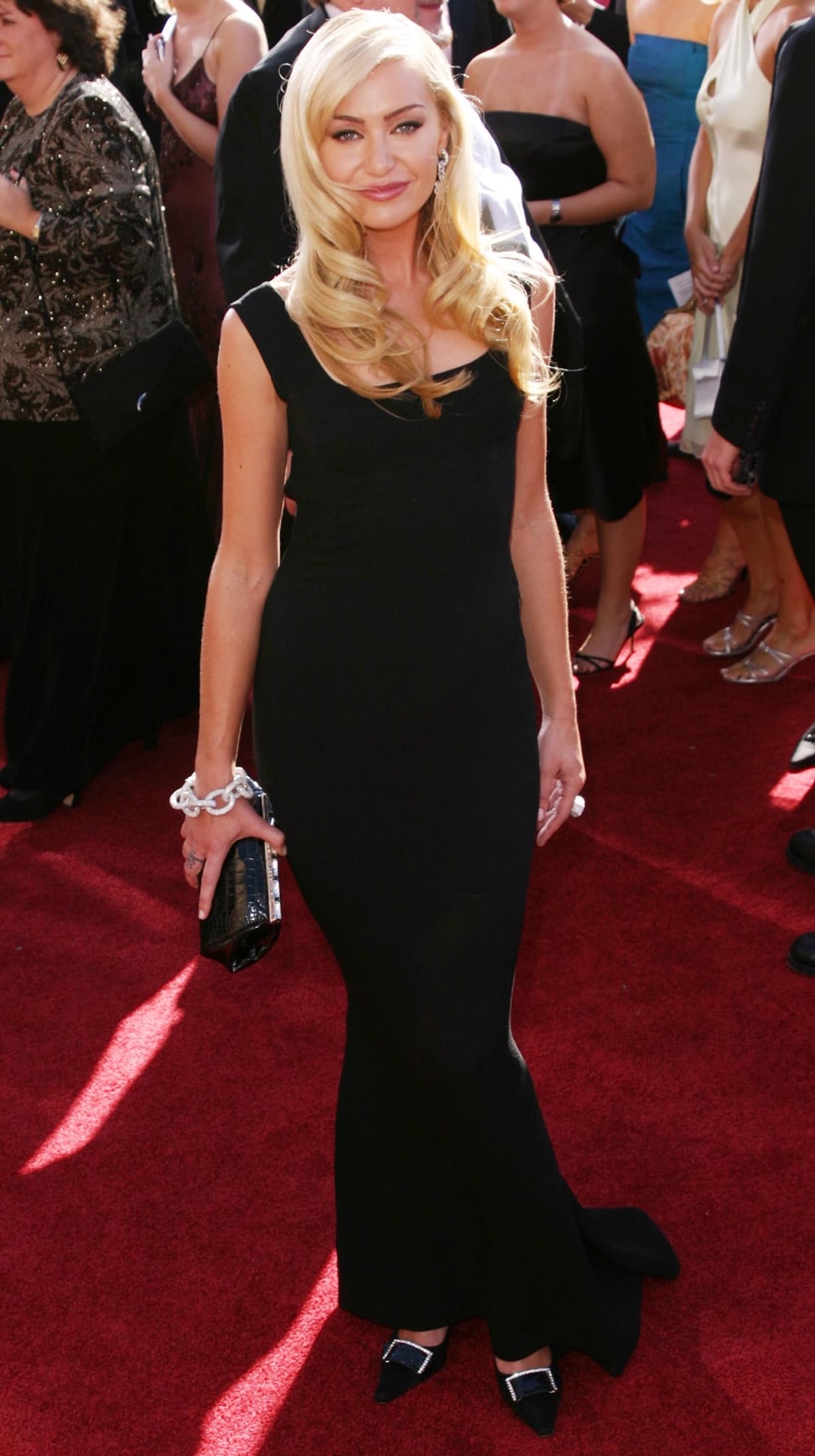 Today, Portia is most known for her role as Lindsay Bluth Funke in “Arrested Development.”

The critically acclaimed television sitcom was initially canceled, but after six years, filming for the fourth season of Arrested Development began in August 2012, with de Rossi reprising her role as Lindsay Bluth Fünke.

Ellen and Portia have been married since 2008, but they continue to face rumors of divorce. However, Ellen and Portia appear to be fine, with Ellen even calling her wife the “best person” she knows.

They continue to support each other no matter what. Ellen and Portia seem happier than ever, so maybe Ellen and Portia’s relationship will not encounter even more divorce rumors. 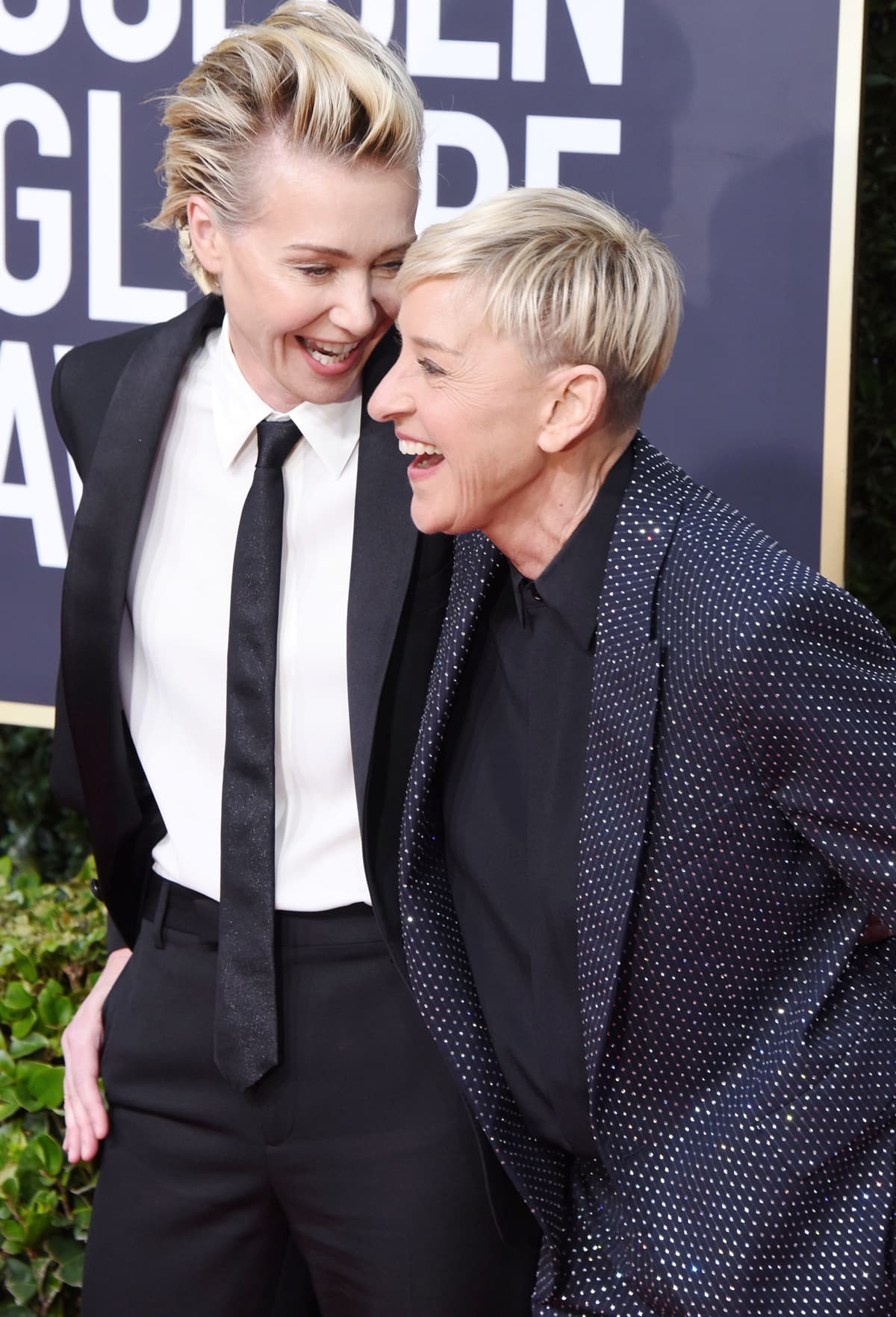 When asked about divorce rumors on Howard Stern, Ellen said, “I don’t know why they do this. We’re kind of flattered. We don’t almost break up, we don’t fight, we’re madly in love, and I guess it’s boring.”

Ellen and Portia’s Net Worth

According to Forbes, Ellen DeGeneres’ net worth is known to be around $360 million. Ellen’s income comes from several sources, including her talk show, various roles in films, endorsements, and her various investments.

Portia has a net worth of about $50 million. Portia acquired this wealth because she has earned money from several films and television shows.

Ellen DeGeneres is about 5 feet 7 inches tall, while Portia de Rossi is approximately 5 feet 8 inches tall. Ellen’s height and Portia’s height create a height difference of only around one inch.

Born on January 26, 1958, in Metairie, which is part of the New Orleans metropolitan area in Louisiana, Ellen is 63 years old. 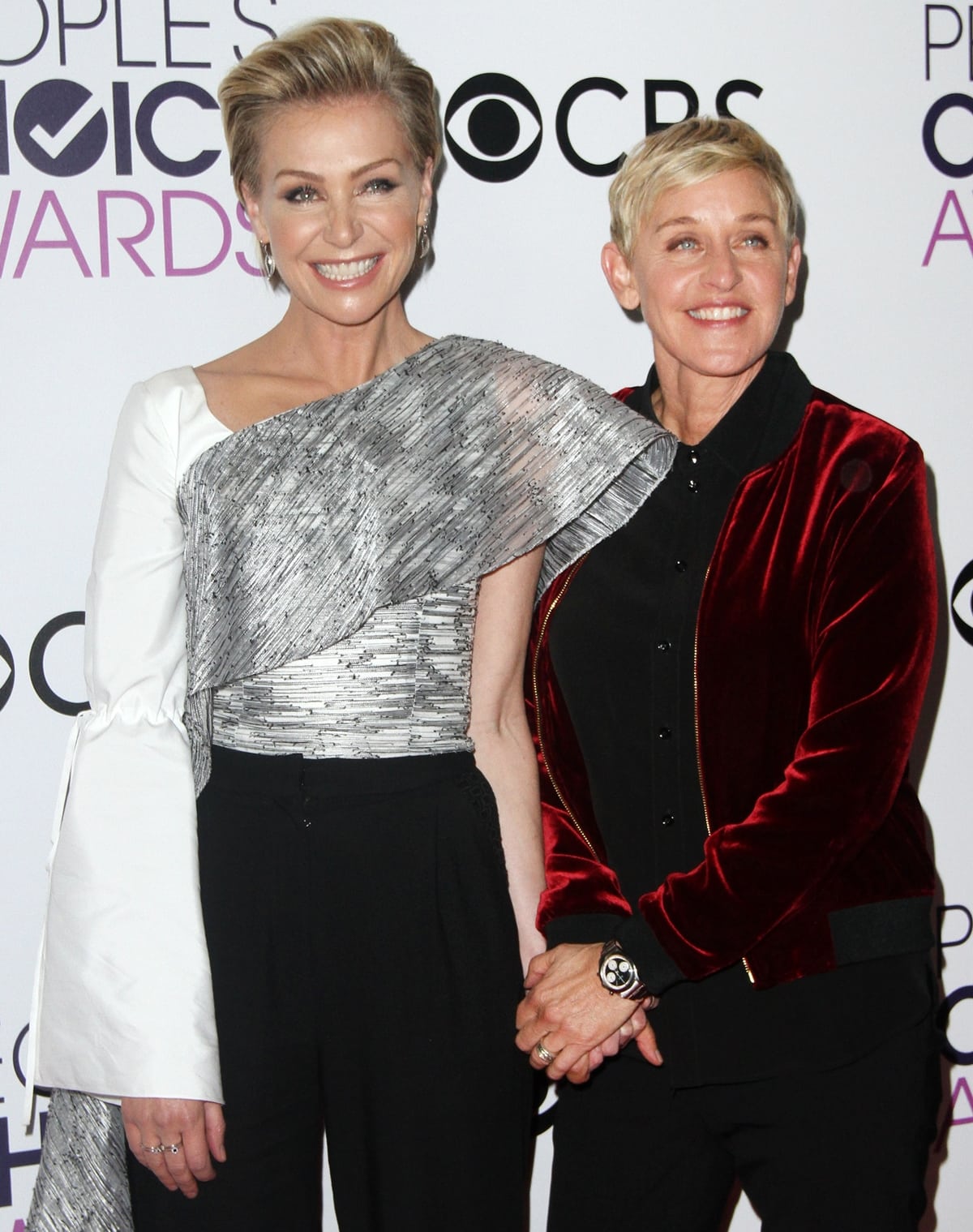 15 years younger, Portia celebrated her 48th birthday this year and was born on November 30, 1973, in Horsham, a regional city in the Wimmera region of western Victoria, Australia.

Although they have a significant age difference, it does not seem to have much of an effect on their relationship.

Although they frequently face rumors of divorce, Ellen and Portia have proven that they have a strong, loving relationship built to last. After shattering several social barriers, their marriage has lasted over twenty years and shows no signs of slowing down.

The end of her talk show will leave a great void in the entertainment industry, but Ellen’s new ventures will surely be just as impactful. One of the most influential people in Hollywood, she will undoubtedly continue to entertain.

Portia has made her name as a gifted actress and will hopefully continue to inspire and entertain us with her talent. 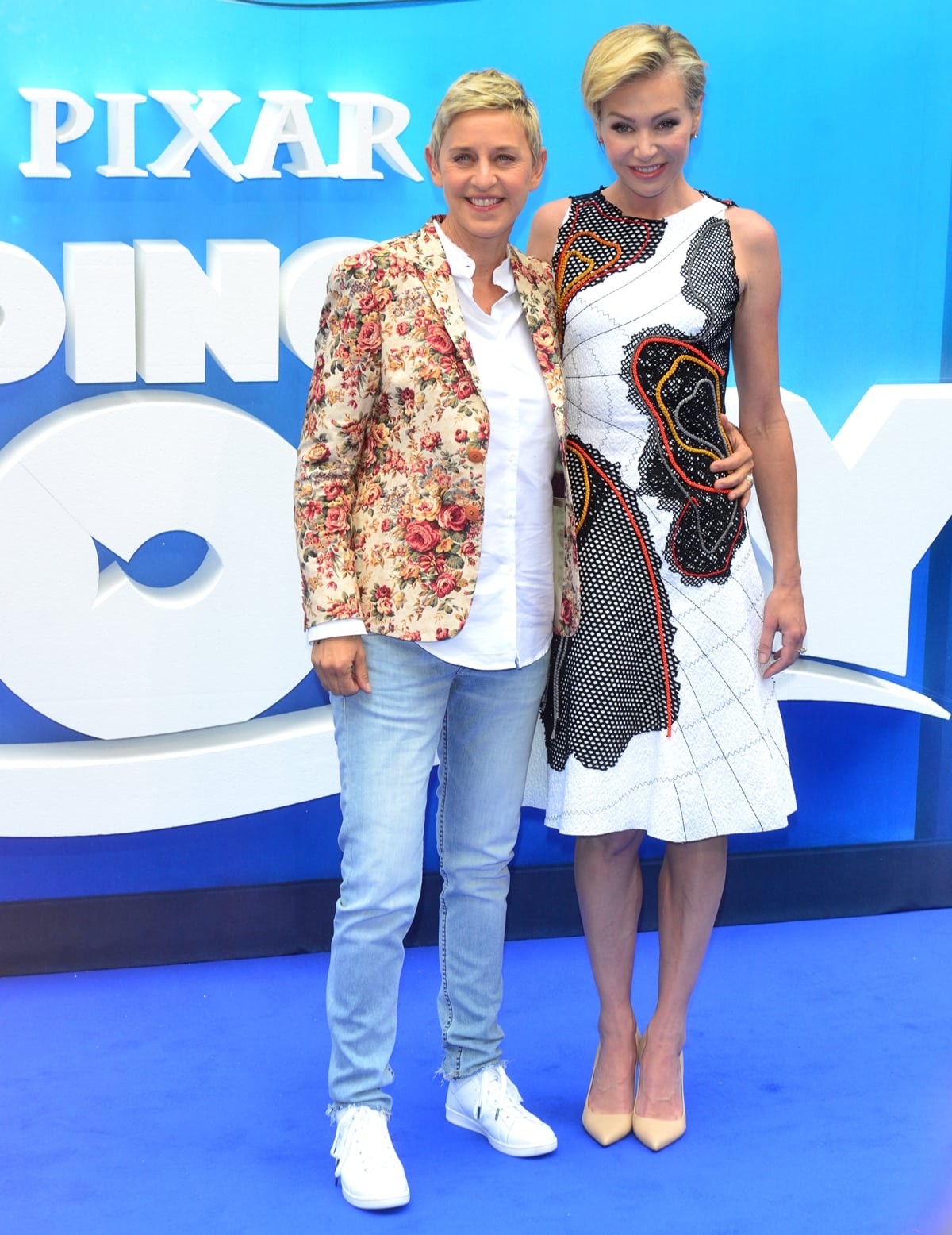 Ellen DeGeneres and her wife Portia de Rossi pose for photos at the Finding Dory premiere held at the Odeon Leicester Square on July 10, 2016, in London, England (Credit: WENN)

Now, Ellen and Portia can focus on creating an even happier life for themselves and those around them. We cannot wait to see what else they have in store for us.

In early 2016, Portia de Rossi became another victim of body shaming after photos of the actress-slash-model clad in a side-cut-out rib-baring dress were found online. 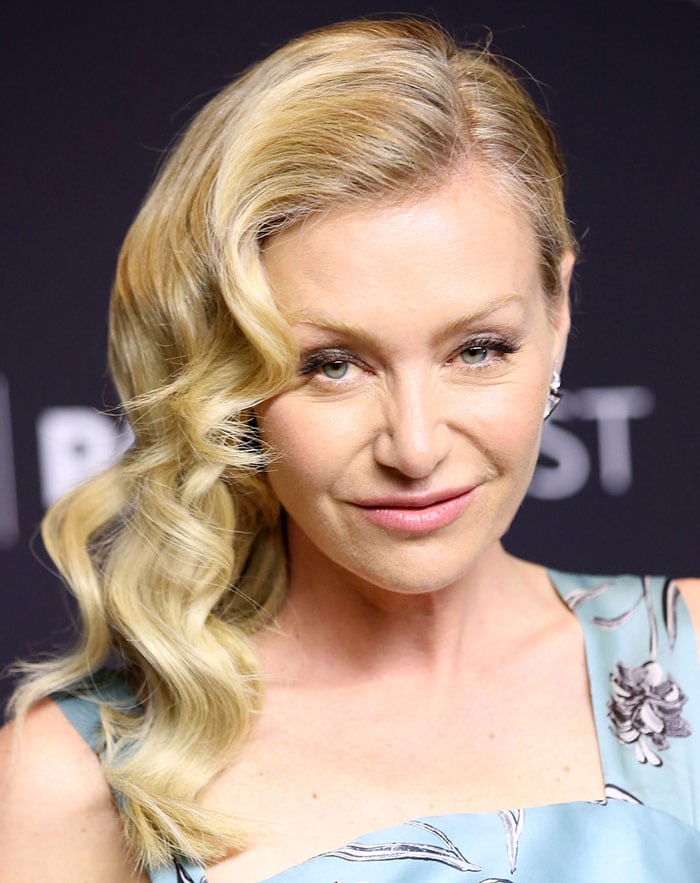 Portia de Rossi sweeps her hair to the side for the “Scandal” panel held March 15, 2016, at the Dolby Theatre during the 33rd annual PaleyFest Los Angeles (Credit: Brian To / WENN)

Six years earlier, she published a memoir, Unbearable Lightness: A Story of Loss and Gain, about her experiences with anorexia and bulimia. It is available on Amazon and also discusses her rise to fame in Hollywood.

In 2015, De Rossi appeared on the Australian Today Show and spoke about the pressure that Hollywood places on women’s bodies. “I was obviously very affected by it … but obviously [the pressure] still exists, it does exist to a degree and I think it’s worse for really young girls,” she said. 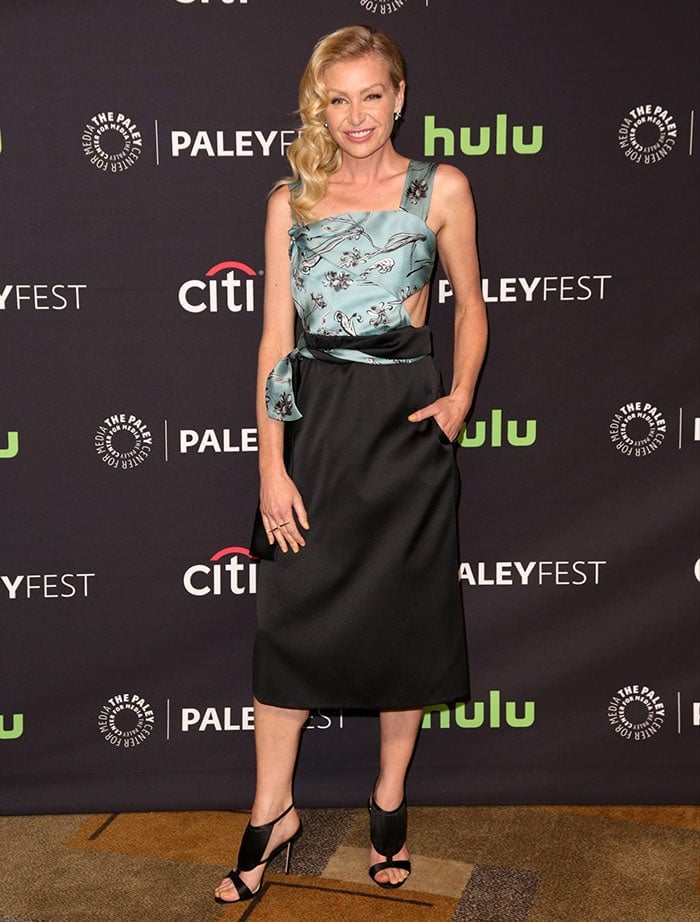 The then 43-year-old was photographed at the 2016 PaleyFest panel for “Scandal” held at the Dolby Theatre in Los Angeles.

She raised some eyebrows in a 3.1 Phillip Lim dress, which we thought looked just perfect on her. It featured a teal floral-printed top half with knotted details and back cutouts, a tie belt, and a plain black midi skirt.

Portia proved she could still strut her stuff even at 43. We think she looked undeniably stunning in the Spring 2016 dress. 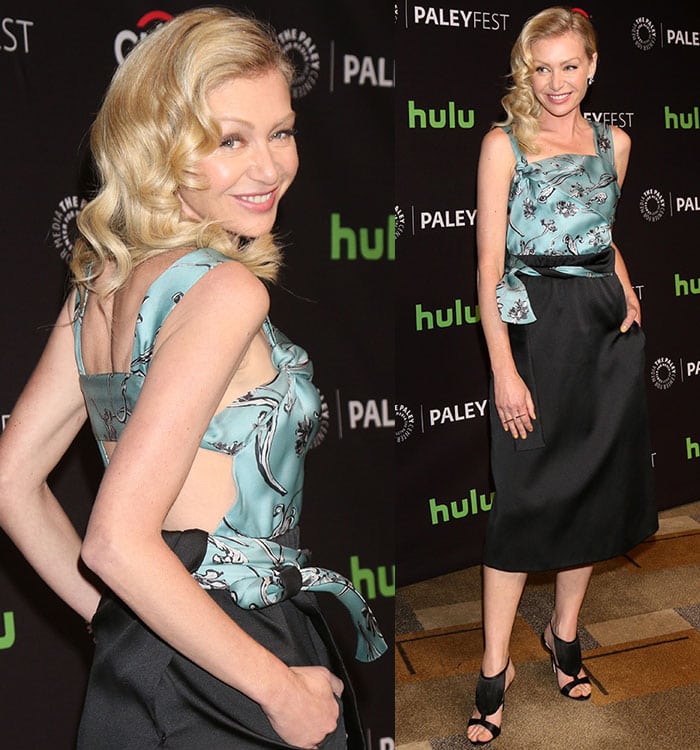 The Australian-American businesswoman, philanthropist, and former model and actress accessorized with a pair of earrings and a couple of rings.

She swept her curled blonde locks to one side and wore light smoky eyeshadow and pink lipstick. 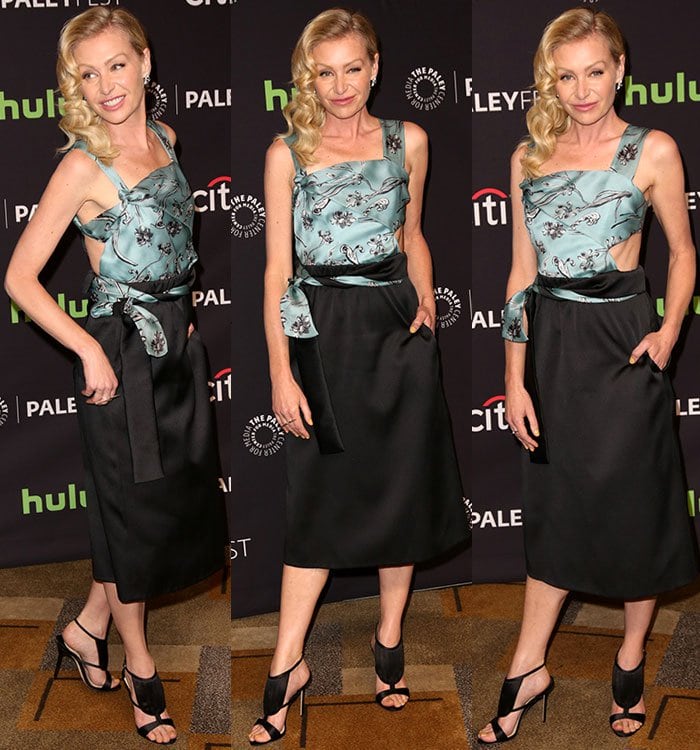 Portia’s Olgana “La Decouverte” sandals provided a hint of edge to the look.

They are made of a silk satin material and feature wide menswear-inspired pleated T-straps, open toes, buckled ankle straps, and about 4.5-inch heels. 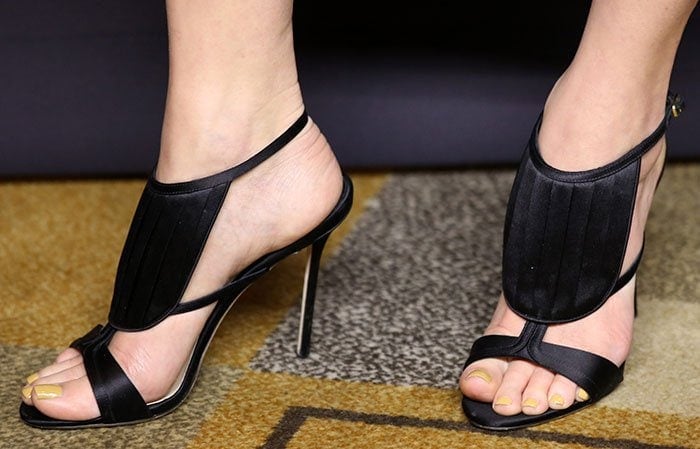 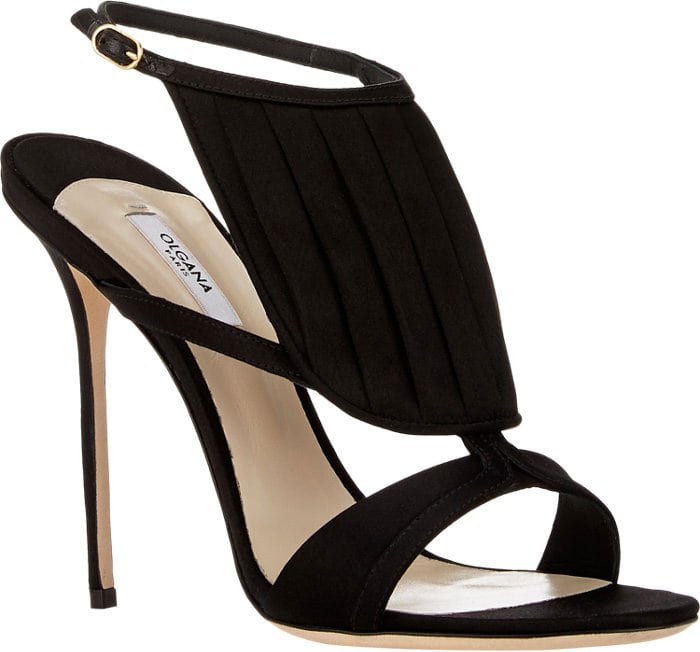