In the case of comedian Stephen Colbert and his wife Evelyn McGee-Colbert, both are true. Their relationship has survived almost three decades, and their love story made headlines across the media when Colbert shared intimate details about it during a Q & A session on his show, The Colbert Show.

Stephen Colbert and his wife Evelyn McGee have been together for almost 30 years (Credit: Avalon / WENN)

The Childhood Tragedy Changed His Life

Stephen Tyrone Colbert was born in 1964 and spent most of his growing-up years between Charleston, South Carolina, and Charlotte, North Carolina.

His wife, Evelyn, was born just one year before, in 1963, and grew up in the same area of Charleston that Colbert’s family lived.

In fact, they would learn in 1990 that they grew up just two blocks apart and knew many of the same people and spent their childhoods in the same neighborhood.

Evelyn McGee is a year older than Stephen Colbert and they found out in 1990 that they spent their childhood in the same neighborhood (Credit: LK / WENN)

Stephen Colbert is no stranger to personal trial. The youngest of 11 children, he was raised in a suburb of Charleston, South Carolina.

At the young age of ten, his father and two of his brothers died in a plane crash. The 1974 Eastern Airlines crash killed 72 of the 82 people on board and marked his life forever. The accident was caused by “the flight crew’s lack of altitude awareness and poor cockpit discipline.”

In a 2019 interview with Anderson Cooper, Colbert refers to this tragedy as having forever changed the trajectory of his life but views it as a gift.

Cooper famously said to Colbert in the interview, “You said, ‘What punishment of gods are not gifts. Do you really believe that?’” 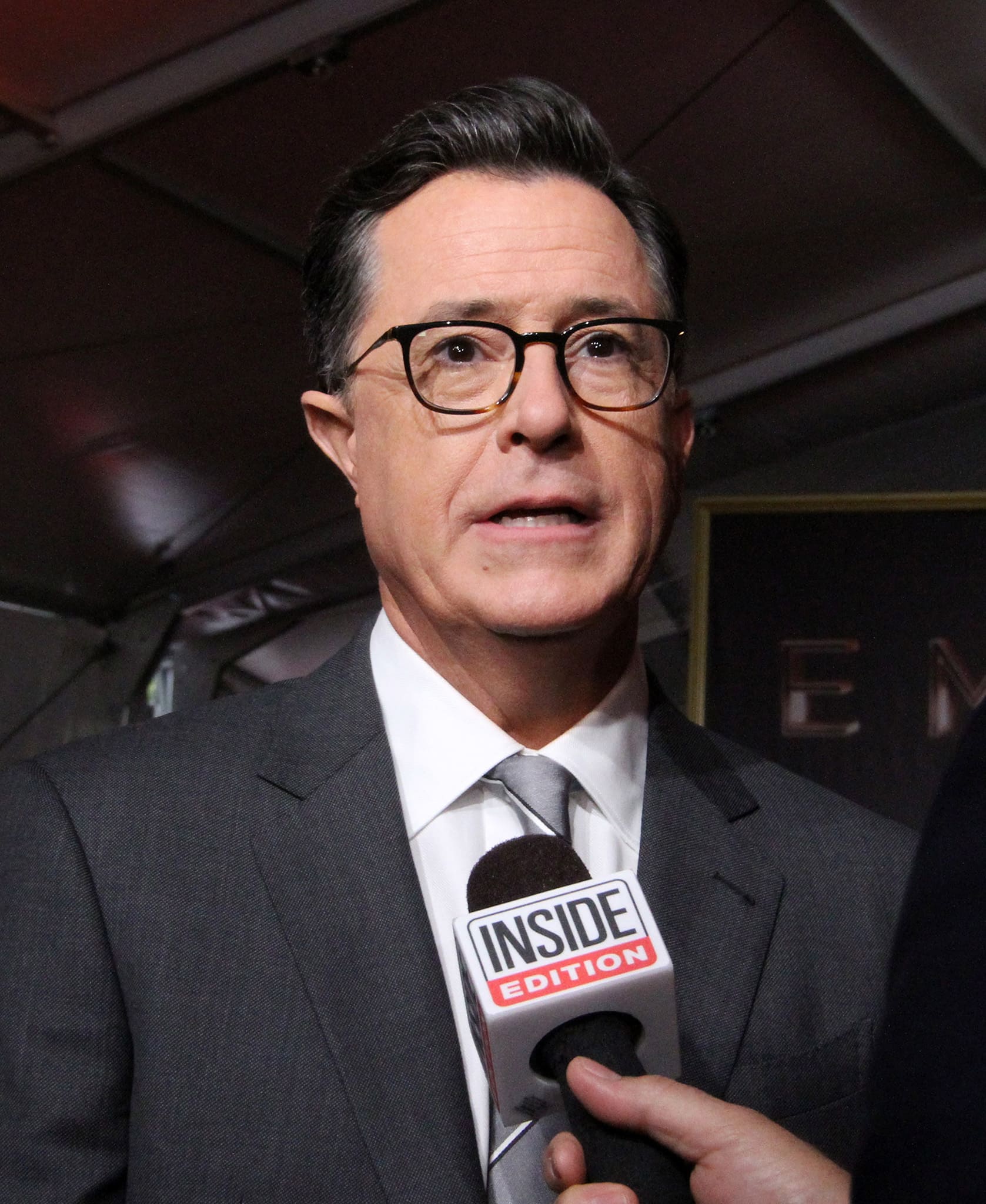 Stephen Colbert was only ten when he lost his father and two brothers to a plane crash (Credit: Adriana M. Barraza / WENN)

He credits this tragedy as helping him to understand the suffering of others, and with helping him connect with his wife as well as his children.

After the plane crash, he would move with his mother and siblings to Charlotte, North Carolina, where he would spend the rest of his adolescence.

In 1990, Stephen Colbert was several years into his time with Second City, a well-known improv troupe in Chicago.

Initially hired to understudy fellow comedian Steve Carell, he soon gained a place in his own right in the group. It was during this season of his life that he traveled home to Charleston to gain some clarity for an important life decision.

Days before meeting his wife, Evelyn, Stephen faced an ultimatum from his then-girlfriend – that they would get married or break up. He understood how vital it was to get this decision right, so he traveled home to his home turf to get some perspective.

He recalls calling on the wisdom of his mother as he navigated this decision. He laid out the situation for his mom, and – as Stephen tells the story – she responded by asking, “Well do you love her?” Stephen replied, “Well, I think so.” 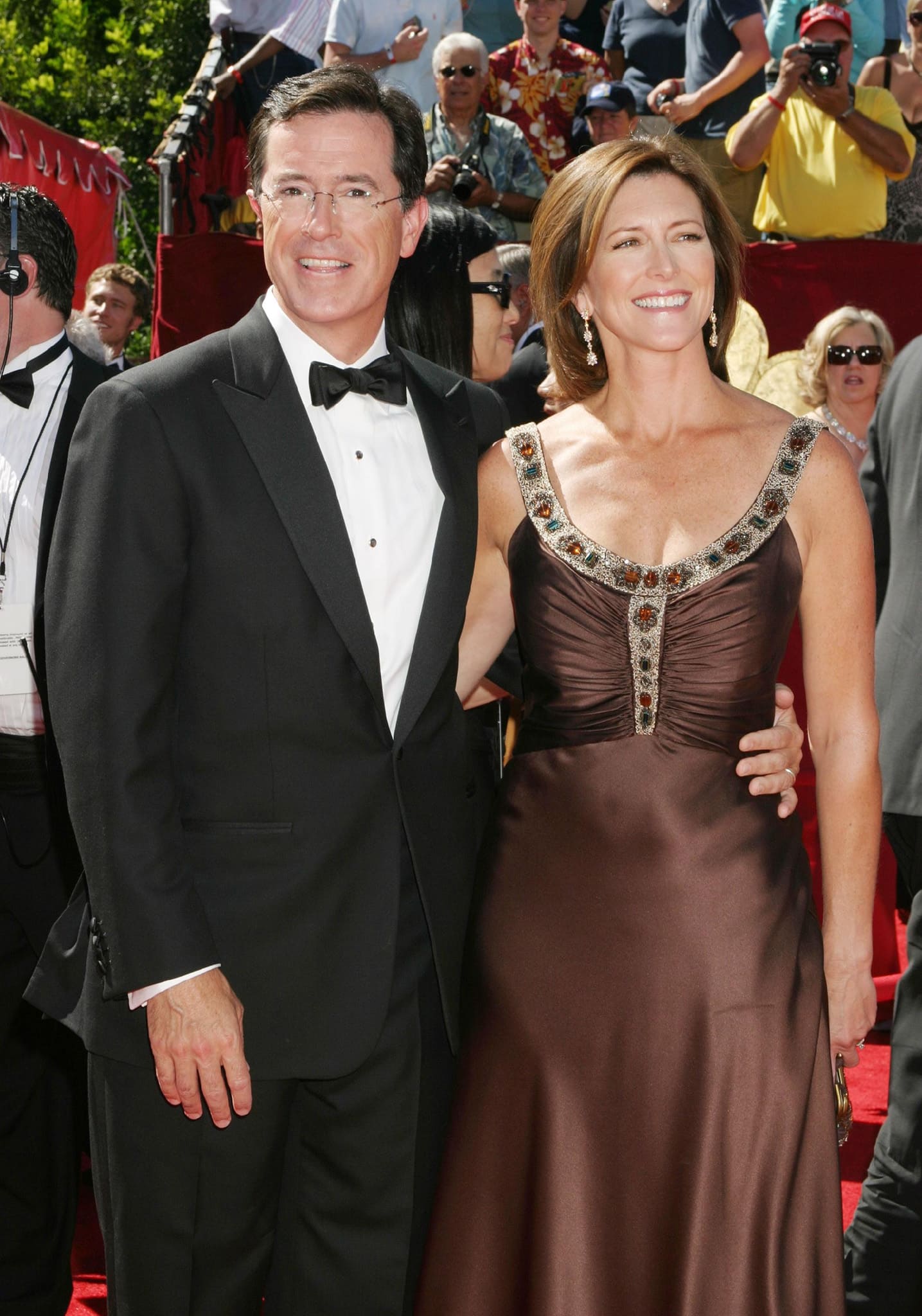 His mother then asked, “Do you want to marry her?” Stephen responded, “I don’t know,” and his mother suggested that, when it comes to the decision of who to marry, ‘I don’t know’ isn’t good enough.

The heavy decision he had gone home to make was made quickly, and he decided to spend the rest of his trip enjoying his time with his mom.

It was during this trip that Colbert’s mother took him to the premiere of the Philip Glass and Allen Ginsberg chamber opera, “Hydrogen Jukebox,” as Colbert’s sister was unable to attend.

As they waited for the play to start and mingled with the crowd, a woman in a black linen dress caught Colbert’s eye. It was none other than his future wife, Evelyn McGee. In fact, he says that the first time he saw her, he thought to himself, “Her. There’s your wife. You’re going to marry her.”

Colbert admits that this was a crazy thought, but he was struck by her beauty and poise. After the play, he and his mother were invited to an after-party, and as Colbert went to serve himself with strawberries from the buffet, Evie cut the line in front of him. Stephen thought to himself, “She wants me to say hello to her.” 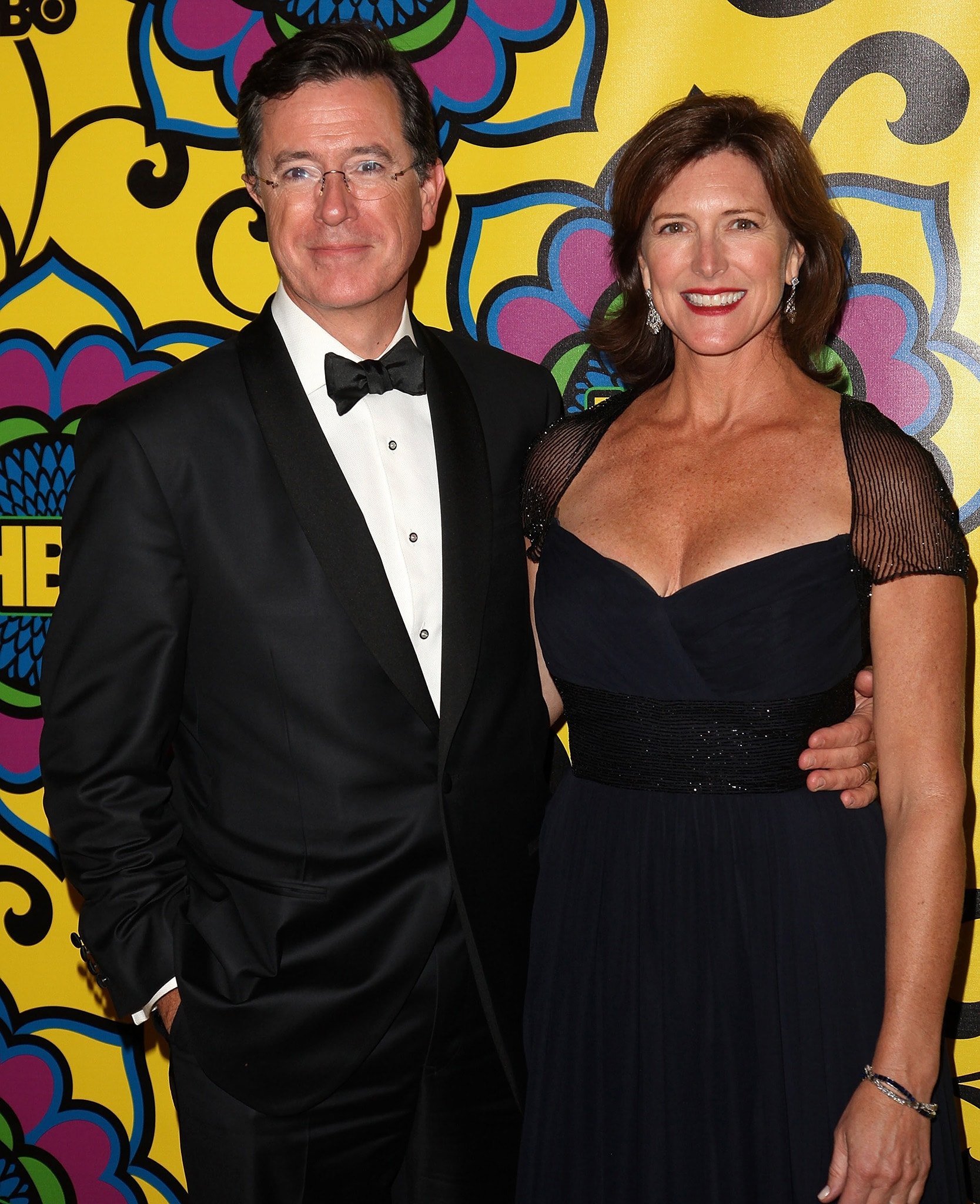 Stephen Colbert said that from the moment he saw Evelyn, he knew he was going to marry her (Credit: WENN)

The two had been exchanging glances all evening, and as they finally looked at each other from up close, they realized they had known each other as children.

Evelyn was raised in Charleston, South Carolina, the daughter of prominent Charleston litigation attorney and politician Joseph McGee. She went on to attend the University of Virginia College of Arts and Sciences, where she majored in English and Drama.

Although they had grown up mere blocks from one another, they had gone to different schools, with Evelyn attending an all-girls school and Colbert having gone to what he describes as essentially an all-boys school.

After the two stepped out of the buffet line, they went on to talk for over two hours. As they chatted and laughed together, Stephen began to wonder if Evie was simply showing him the politeness common for people from the Charleston area. He started to ask himself if she was just being nice and accommodating his talkative excitement.

As they talked, they mentioned a poet they both liked – Chuck Sullivan – and were surprised when a man nearby overheard them and introduced himself as Sullivan’s son.

They chatted for a few moments, and Stephen took this as a sign that this conversation with Evie was meant to be. He decided to try a little experiment.

Evelyn McGee and Stephen Colbert at the First Annual The Comedy Awards in New York City on March 26, 2011 (Credit: WENN)

If Evie was simply being polite, he feared that she would decline to end the conversation out of hesitation to be seen as rude. He decided to give her an ‘out.’

As she conversed with Chuck Sullivan’s son, Stephen turned away from her for a minute. He actually intentionally looked at his watch and decided he would give her sixty seconds to move on from him.

He figured that if he turned around and she was gone, he would chalk her interest up to politeness and nothing more. He calls that minute “the most harrowing minute” of his life.

However, when he turned around, she was standing there, smiling at him, eager to keep talking to him.

Do Stephen Colbert and Evelyn McGee Have Kids?

Stephen and Evelyn would go on to marry in 1993 and have since had three children together – Madeleine, Paul, and John.

Stephen would rise to fame, moving on from Second City to write for the hit show, “Strangers with Candy,” after which he made a name for himself on “The Daily Show with Jon Stewart.” Colbert continues to host his own talk show, which is a great success.

Stephen Colbert brings his family, including his wife Evelyn McGee and their three kids, at the Tribeca Film Festival 2008 premiere of Speed Racer on May 3, 2008 (Credit: PNP / WENN)

In a 2012 interview with Oprah Winfrey, Stephen and Evie discussed their relationship. Evie describes her initial attraction to Stephen as motivated by his kindness, generosity, and intelligence.

Oprah pointed out that, at the time they married, Stephen wasn’t making much money at all. Evie, with a broad smile, acknowledges this and goes on to tell stories of how romantic her husband has always been.

Stephen Colbert has continued to face his share of troubles, including a bout with severe anxiety as well as being diagnosed with positional vertigo in 2020. He also reports being deaf in one ear after having had a tumor removed as a child. 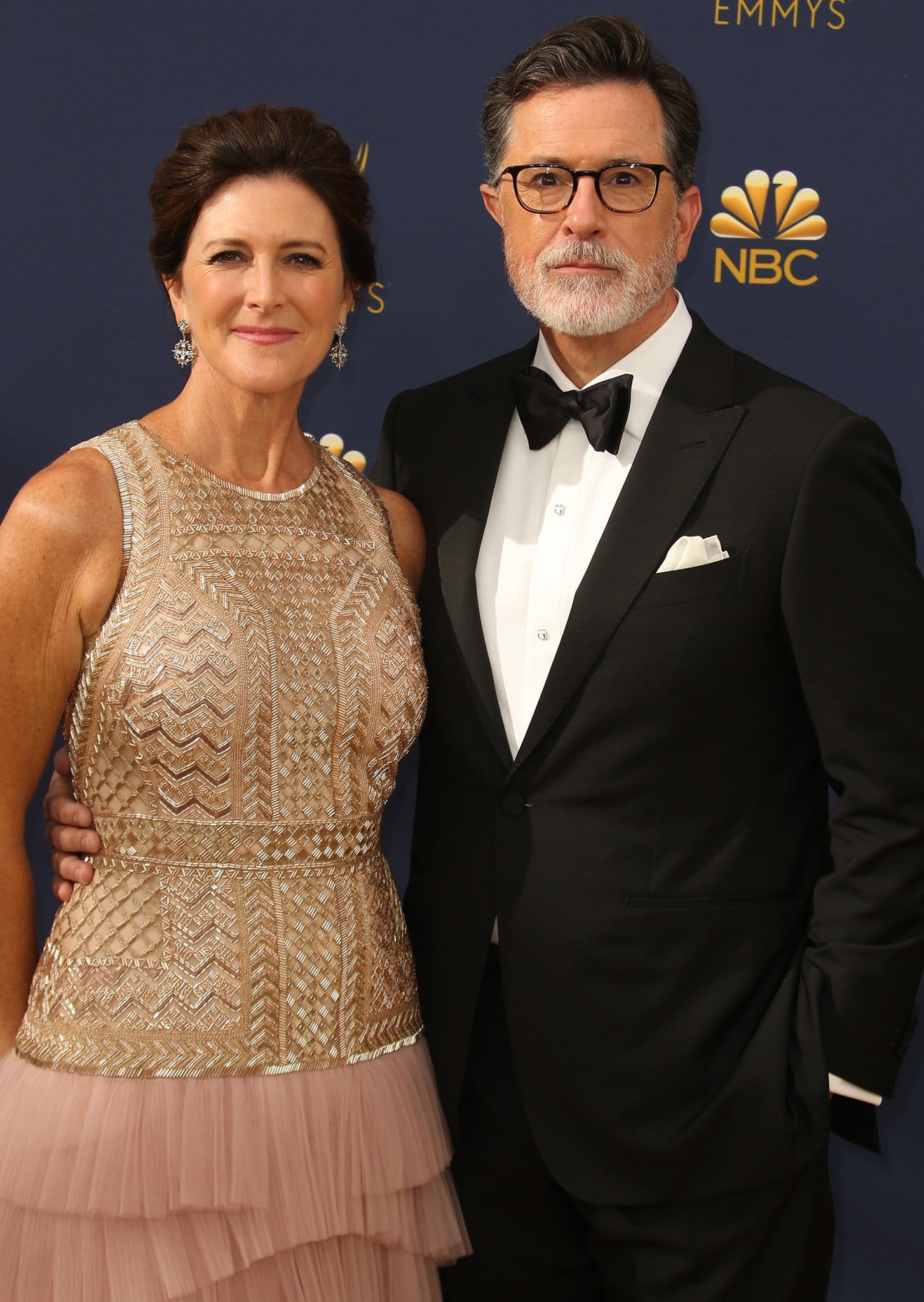 Stephen and Evie have gotten to work together in show business on more than one occasion, with Evie making cameos in “Strangers with Candy” and appearing together as Lake-town spies in 2013’s “The Hobbit: The Desolation of Smaug.”

She is also credited with crew roles on Stephen’s show, “The Late Show with Stephen Colbert.”

Nurturing a marriage to survive thirty years is a feat in any universe, but in Hollywood, it is a rare victory. Couples that last over several decades have surely built a solid foundation of love, trust, and hard work – and the same can certainly be said of the Colberts.

In September 2015, Emily Blunt was a vision in white as she stopped by The Late Show with Stephen Colbert to promote the premiere of her American action thriller film Sicario. They seemed to have a lot of fun practicing their puke takes. 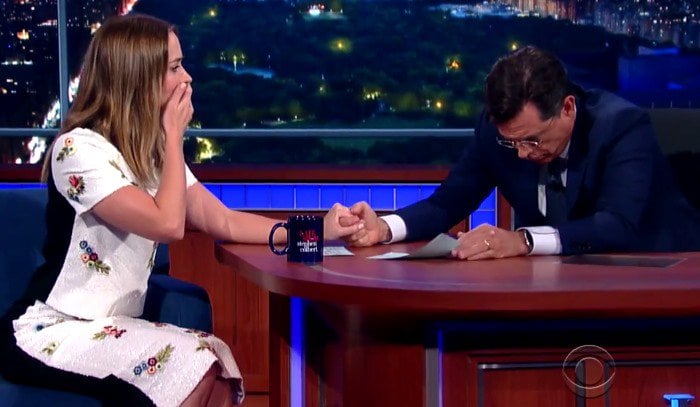 Emily Blunt makes a guest appearance on ‘The Late Show with Stephen Colbert’ in New York City on September 14, 2015

During her appearance, the 32-year-old actress performed a quick rendition of “On The Street Where You Live” from My Fair Lady with Stephen Colbert.

They also pretended to throw up while performing the two last lines from the classic movie Gone With the Wind.

My husband and I are obsessed with your puke takes,” she explained to Colbert about her husband John Krasinski. “It’s just our favorite thing. We do it ALL the time.”

Who do you think won the fake vomit-off? She wore a floral Erdem dress that she styled with a pair of natural and black snakeskin point-toe “Omi” pumps from Nicholas Kirkwood. 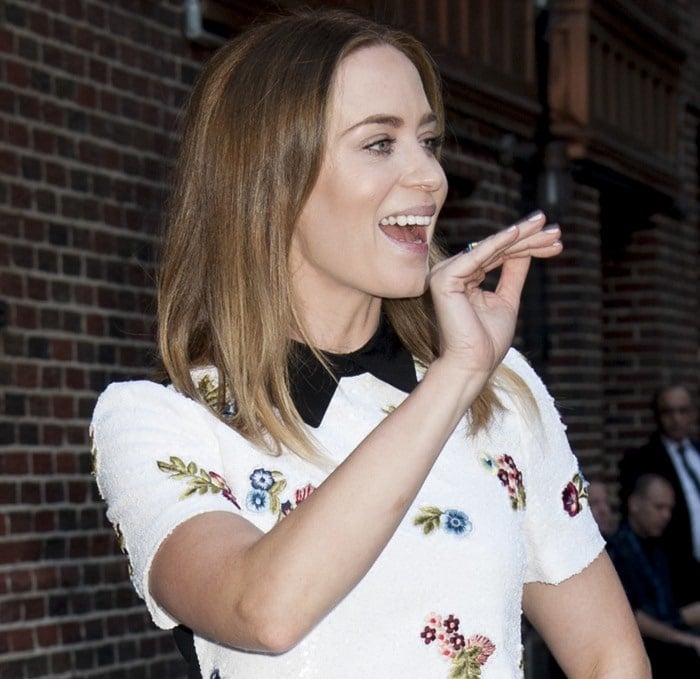 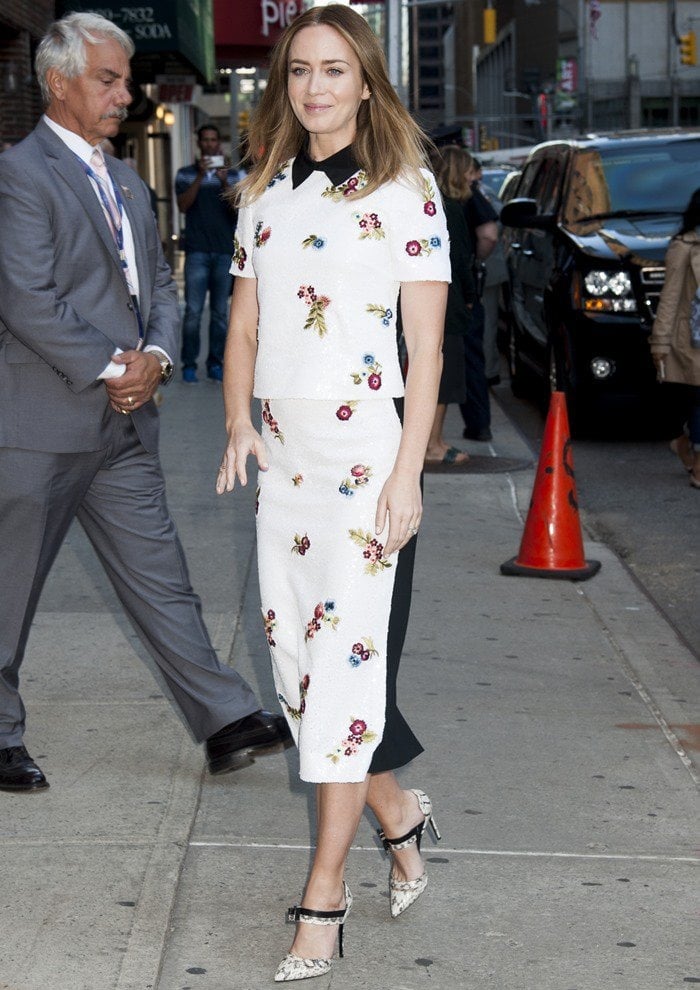 Her classy pumps from the Nicholas Kirkwood 2015 collection feature ankle-straps embellished with a metal-trimmed bow.

This style just sold out at Saks Fifth Avenue, but you can find the black version at Farfetch. 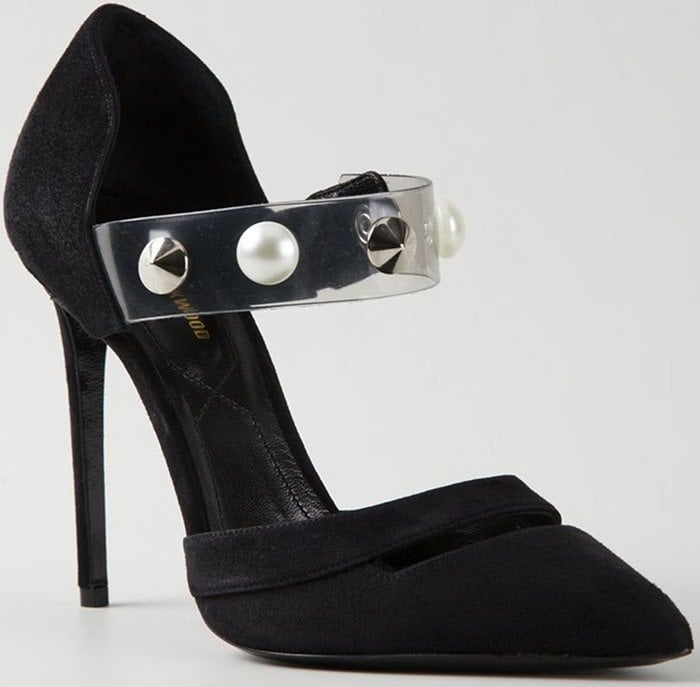 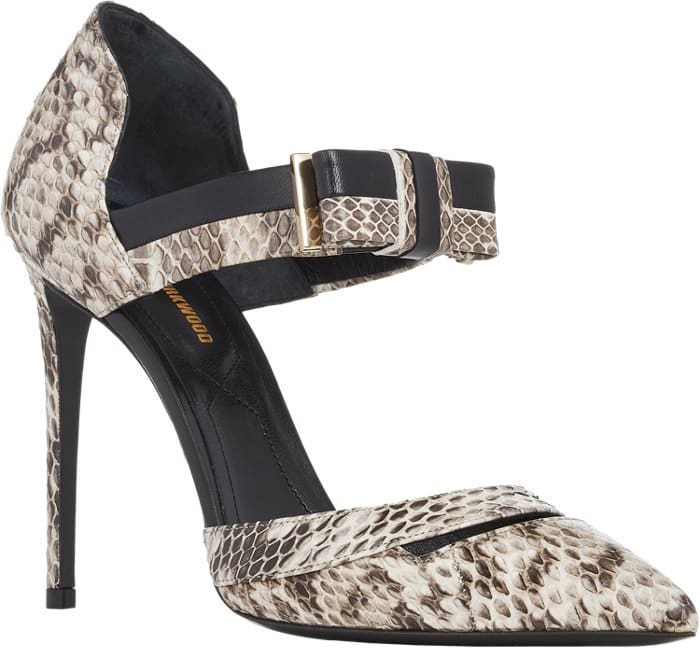