While promoting a new line of socks from women’s shapewear brand SKIMS earlier this week, Kim Kardashian discovered that she has a profile on WikiFeet, a photo-sharing foot fetish website dedicated to sharing photos of celebrities’ feet.

Kim Kardashian steps out in a head-to-toe hot pink Balenciaga outfit with a silver Hourglass bag on her way to rehearsals for her upcoming Saturday Night Live appearance on October 7, 2021, in New York City (Credit: WENN / MEGA)

The 40-year-old reality star was not disappointed when finding her score. “Wait there’s such a thing as a WikiFeet,” Kim said in an Instagram Story video. She proceeded to scroll through the site looking at photos of her bare feet. 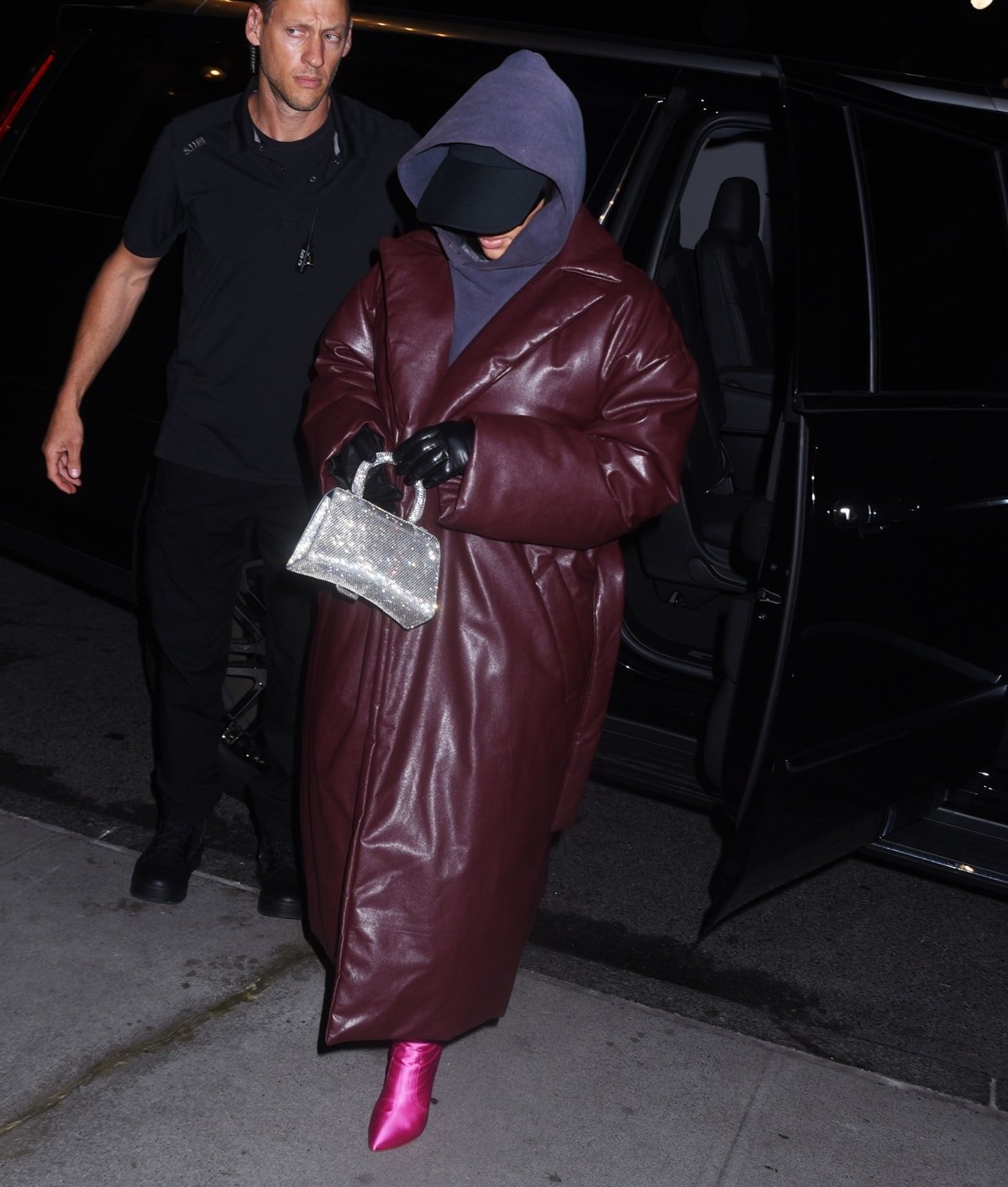 The Saturday Night Live host has also addressed rumors that she has six toes instead of five toes on her feet. You can check out these pictures of Kim Kardashian in high heels and decide for yourself.

“Everyone thinks that I have six toes, and it’s really wild. But it’s this part of my foot that when I wear a shoe just like this, it like smashes down right here,” Kim said on Instagram and showed how the side of her foot creates a little bulge when wearing strappy shoes.

“And in a picture, I don’t know why, it looks like a sixth toe. I hope that answered my sixth toe question,” Kim clarified, before adding, “Because I only have five toes on each foot.”

The Kardashian and Jenner sisters are known for being a tight bunch. In November 2017, Kim Kardashian proved just how close she is with her siblings while making a guest appearance on “The Late Late Show with James Corden.” 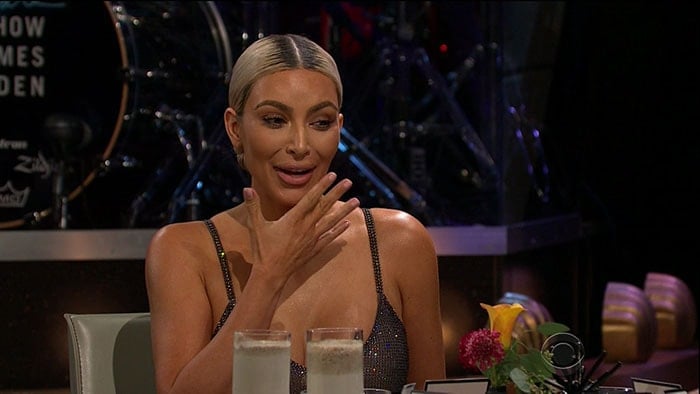 Kim Kardashian West gets ready to play a game of “Spill Your Guts or Fill Your Guts” (Credit: CBS / WENN)

In a gross-out game called “Spill Your Guts or Fill Your Guts,” the then 37-year-old reality star opted to drink a totally disgusting-looking sardine smoothie instead of answering a very revealing question about her siblings. 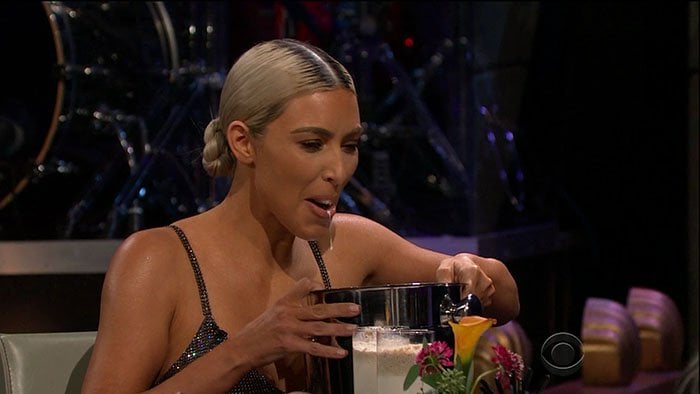 Kim Kardashian downed and then spit out a sardine smoothie (Credit: CBS / WENN)

Kim was doing fine answering questions about how she would rank her family’s style (Kendall is the best dressed while Khloe — she’s so sorry — is the worst) and which of Kanye’s bad habits she wishes he would stop doing (“he falls asleep everywhere!”). 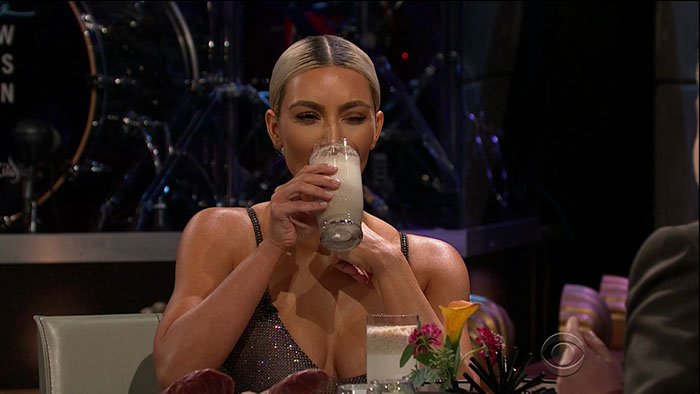 Kim Kardashian had to drink a sardine smoothie after refusing to answer if Kylie and Kourtney are actually pregnant (Credit: CBS / WENN)

Kim skipped out on eating bird saliva and bull penis, but that’s when Corden dropped the bomb. “Kim,” he asked, “there have been lots of rumors about your sisters Khloe and Kylie being pregnant. Are they true, yes or no?”

Instead of spilling the Kardashian secrets, Kim proved her fierce loyalty to her sisters and downed the gross brown-and-white smoothie with separated sardine chunks floating at the top. 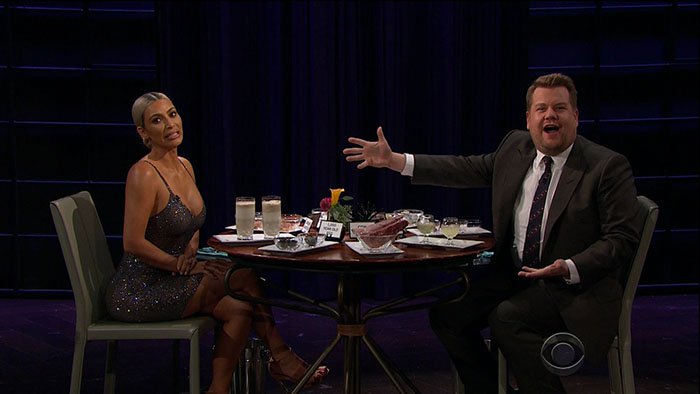 Kim Kardashian having to drink a sardine smoothie on the “Spill Your Guts or Fill Your Guts” segment of her guest appearance on “The Late Late Show with James Corden” aired on November 15, 2017 (Credit: CBS / WENN)

Interestingly, Jennifer Lopez wore a very similar sparkly silver mini dress for her own guest appearance on the same show in May 2017.

While Kim looked hot in her ensemble, we much prefer J.Lo’s choice of silver sandals over Kim’s nude ankle-strap sandals. 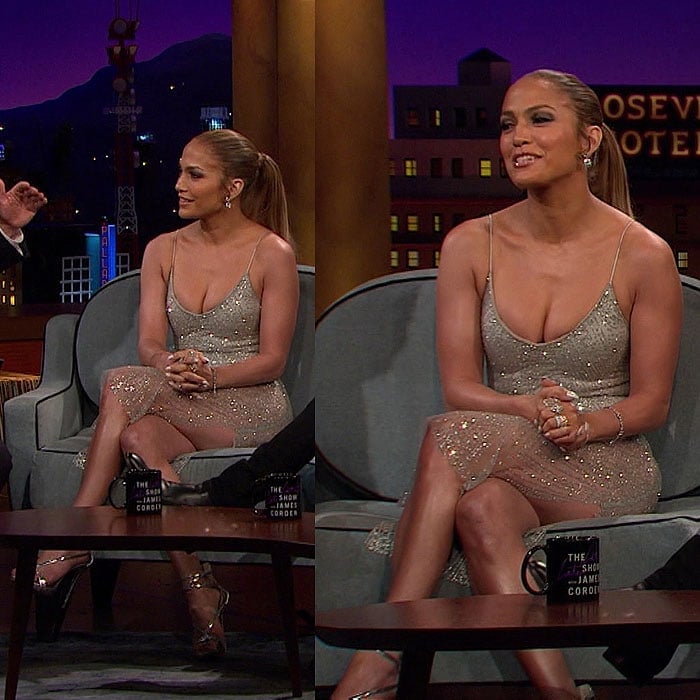 You can shop Kim Kardashian’s Stuart Weitzman “Nudist” sandals at Nordstrom and Zappos. 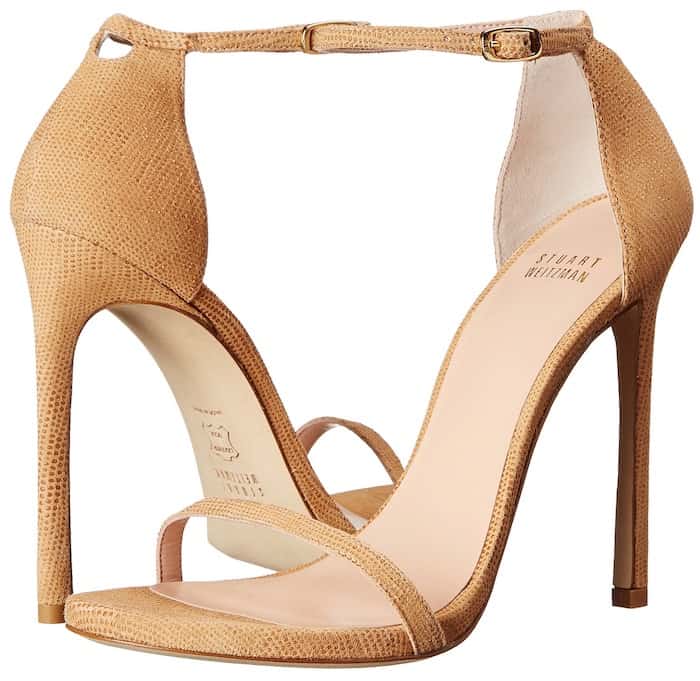