Just recently, the Vietnamese American actress wrapped up filming for her upcoming HBO Max movie, Moonshot, opposite Cole Sprouse. It’s a rom-com science fiction film set in a future where Mars is terraformed and colonized by the best humanity has to offer.

HBO Max hasn’t announced an official release date yet for the film, but fans are hoping to see it before the end of 2021.

Dating Pirates of the Caribbean star Anthony De La Torre for five years, she first met him at a 2015 Emmy nominees reception in Beverly Hills. 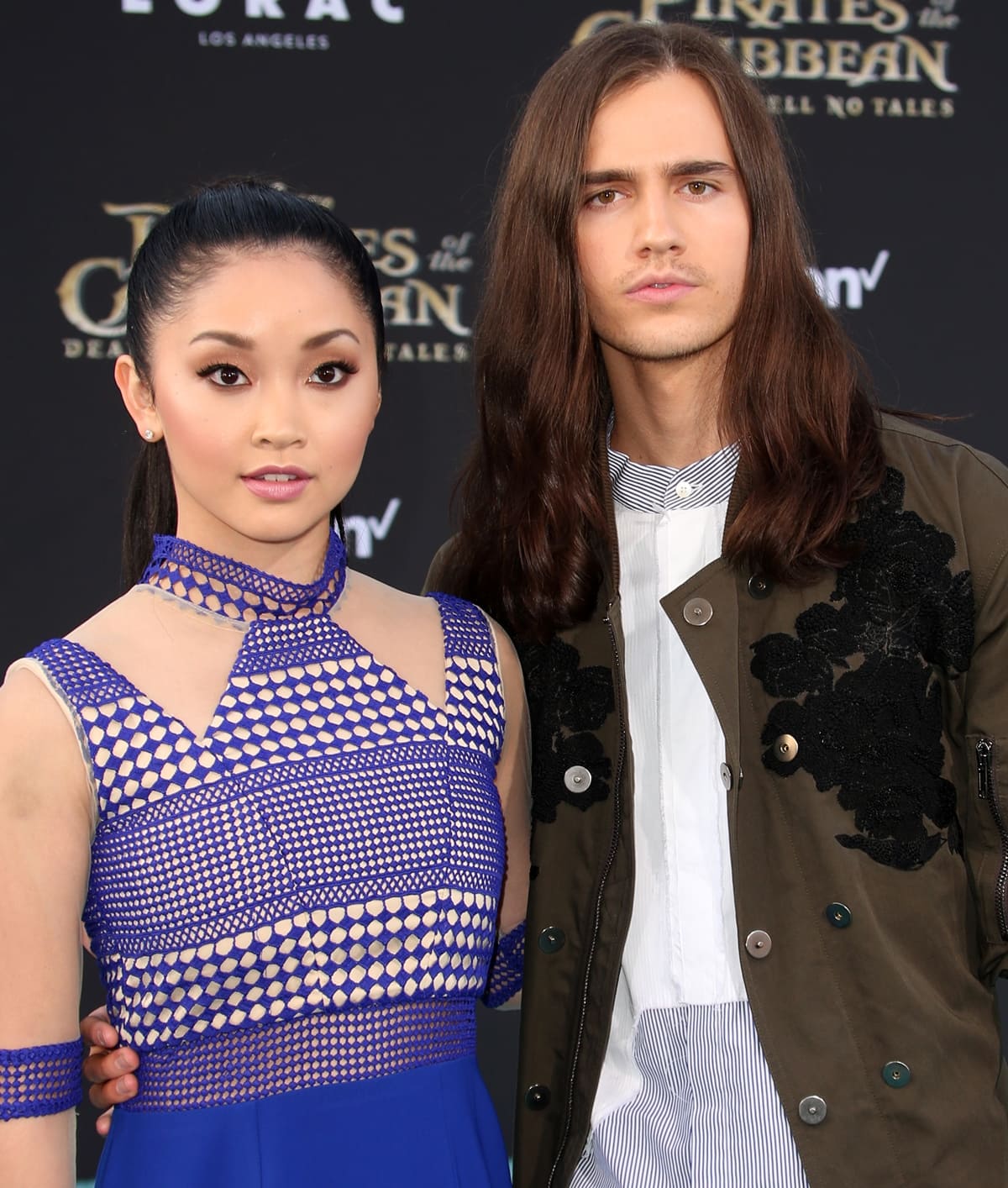 “Hi, I’m Anthony. I thought I would make a friend,” she revealed about his funny pick-up line in a February 2019 interview with Cosmopolitan.

Describing their first meeting “like a ­Taylor Swift song,” they’ve been together ever since and now live together. The couple have also collaborated on a number of songs. 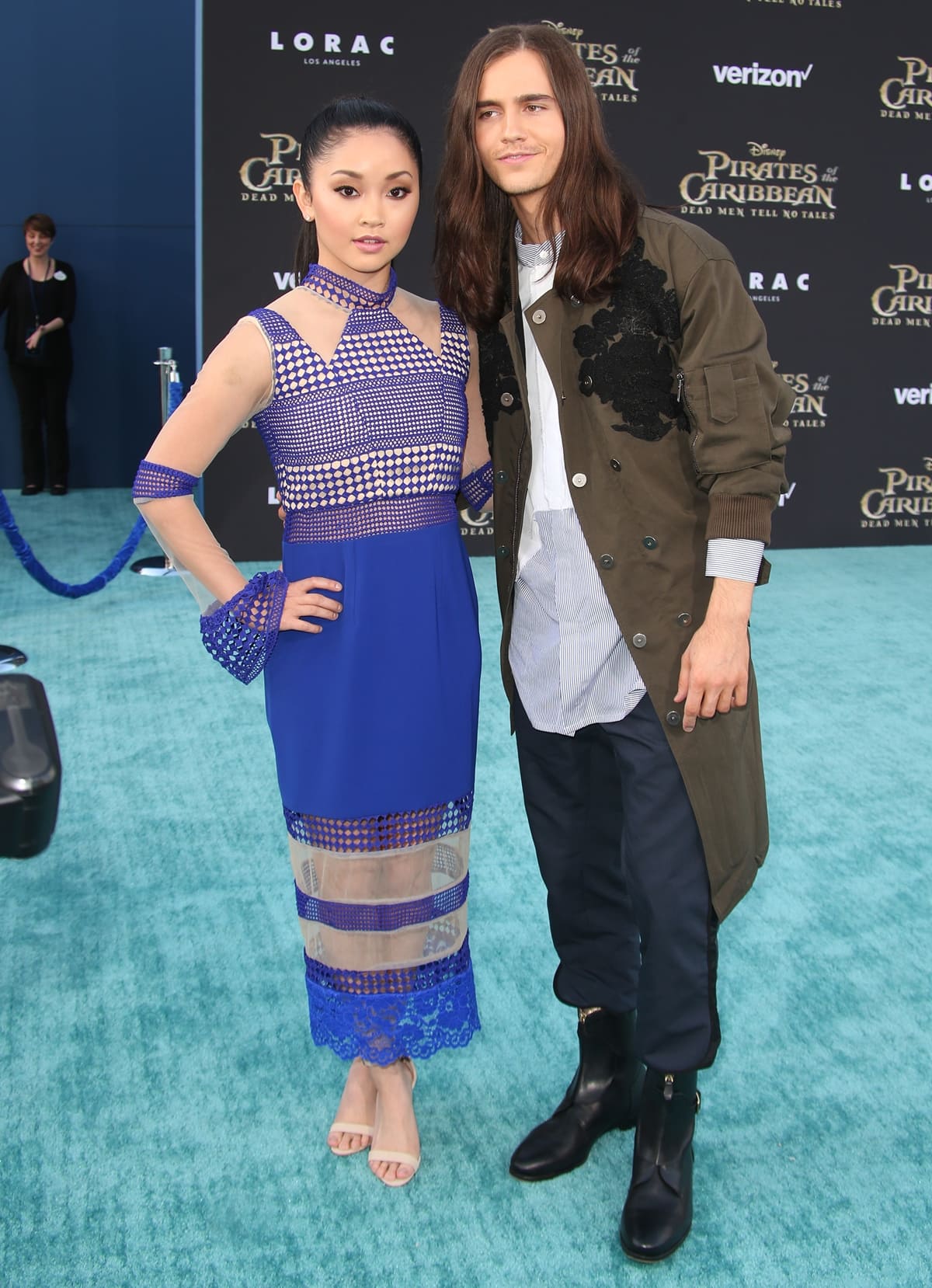 Measuring 5ft 9 (175.3 cm), Anthony De La Torre is significantly taller than Lana Condor, who is just 5ft 2 (157 cm) and shorter than the average woman in the United States.

They celebrated their five-year anniversary on August 31, 2020. “5 years with the man of my dreams,” Lana captioned a romantic picture on Instagram showing her laying on the grass with Anthony.

“You are still my most favorite person in the world. You are my best friend. You have taught me how to love and to be loved, to forgive and to grow, to never give up, to be each other’s teammates and cheerleaders. You make me laugh like no other and it doesn’t matter where we are in the world, as long as I’m with you, I’m home. I love you @anthonydltorre happy anniversary. Let’s cuddle.”

“5 years ago we went on our first date and saw a movie called The Gift. While the plot of the film in no way represents our life, the name of the movie couldn’t be more fitting to what you are,” Anthony wrote.

“The greatest gift I’ve ever been blessed and entrusted with. From our tiny ass apartment with a blow up twin mattress to riding horses in Kenya, it has always been an adventure 🤪 Thank you for changing my life, inspiring me to grow, and making everything worth it. I love you, my tiny burrito 🌯♥️.”

After filming in Atlanta for a couple of months, Lana is now back in Hollywood. And on Saturday, she joined Sophia Bush at the Veuve Clicquot Polo Classic held at the Will Rogers State Historic Park in Pacific Palisades.

The 24-year-old actress, who once blamed Trump for attacks on Asian-Americans, looked cute in a light blue Reformation satin mini dress.

It features a smock neck, long sleeves with puff shoulders, a ruched bodice, and paneling at the midsection that accentuated her tiny waist. 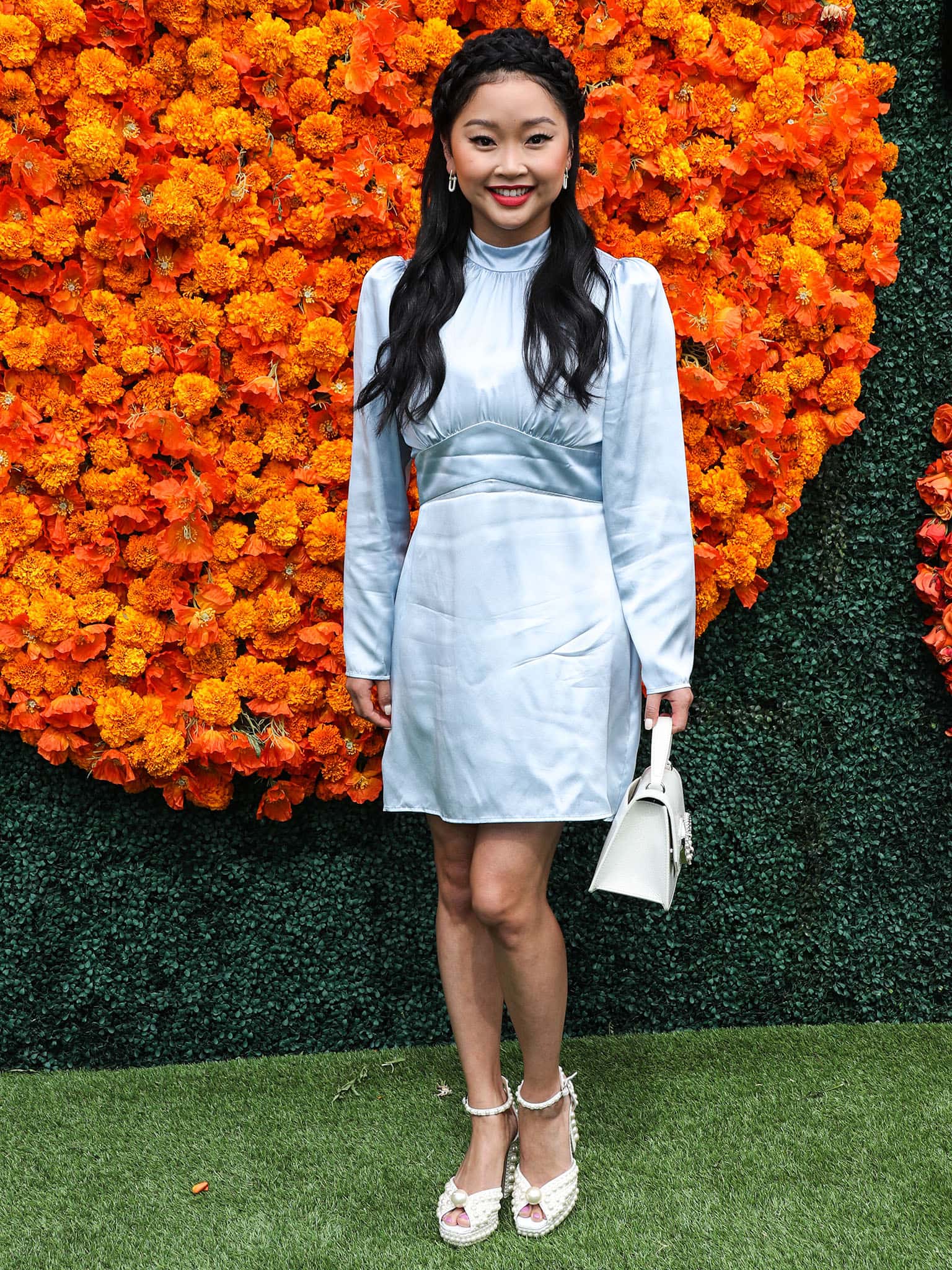 Hairstylist Kat Thompson styled Lana’s raven tresses in soft waves with a crown braid, while makeup artist Melissa Hernandez gave her look a pop of color with bold red lipstick and highlighted her eyes with winged eyeliner and mascara.

The Vietnamese actress, who was adopted by her American parents when she was just five months old, accessorized her look with Adina’s Jewels earrings. 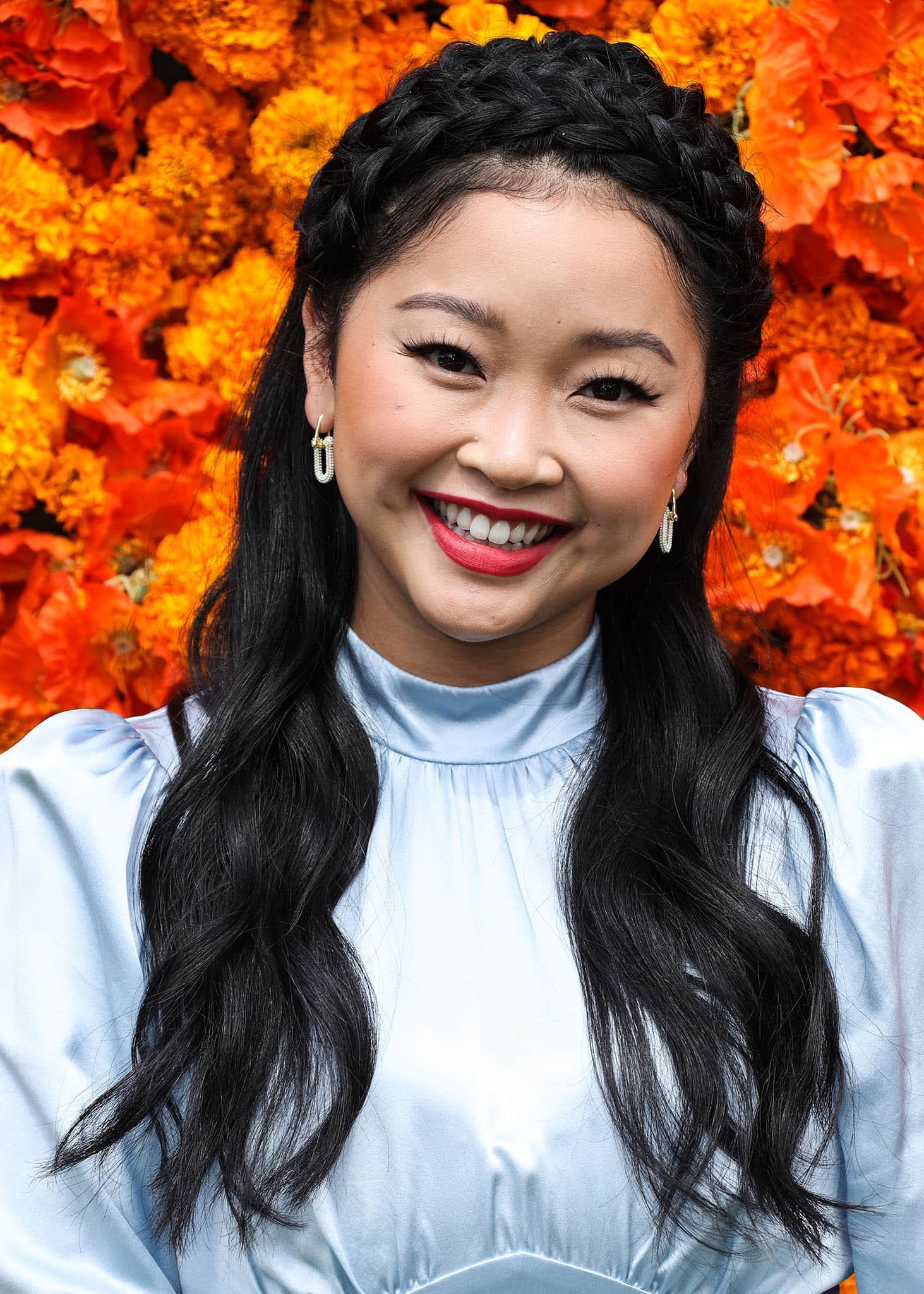 She then carried a white satchel called “Madeline” from Jimmy Choo’s Pearl collection.

Available for $1,950 at Farfetch, the bag is made from patent textured leather and features a rigid briefcase design with a pearl and crystal buckle accent on the fold-over top. 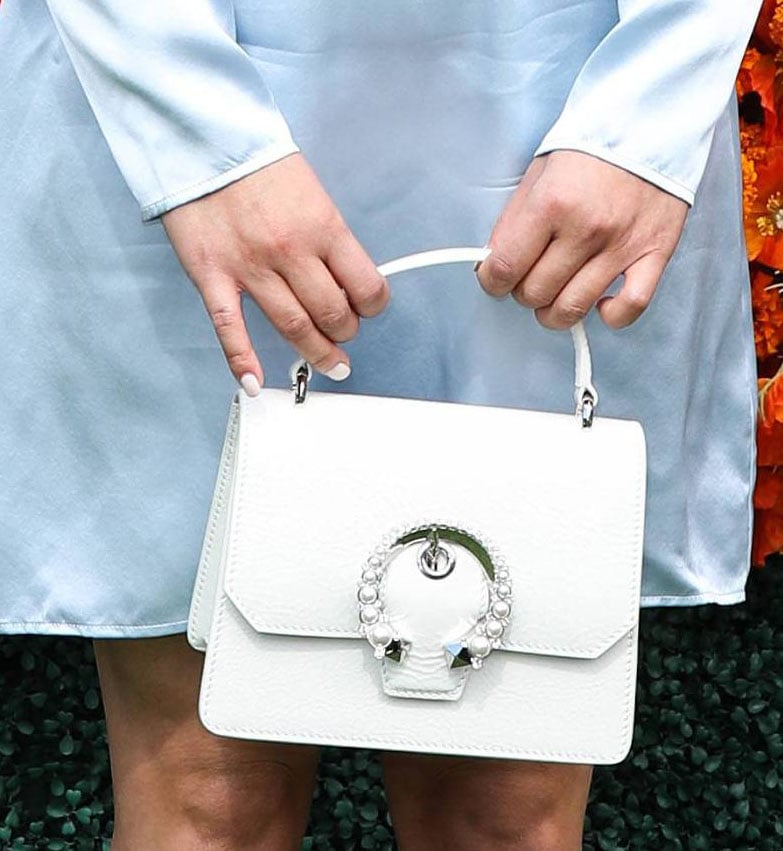 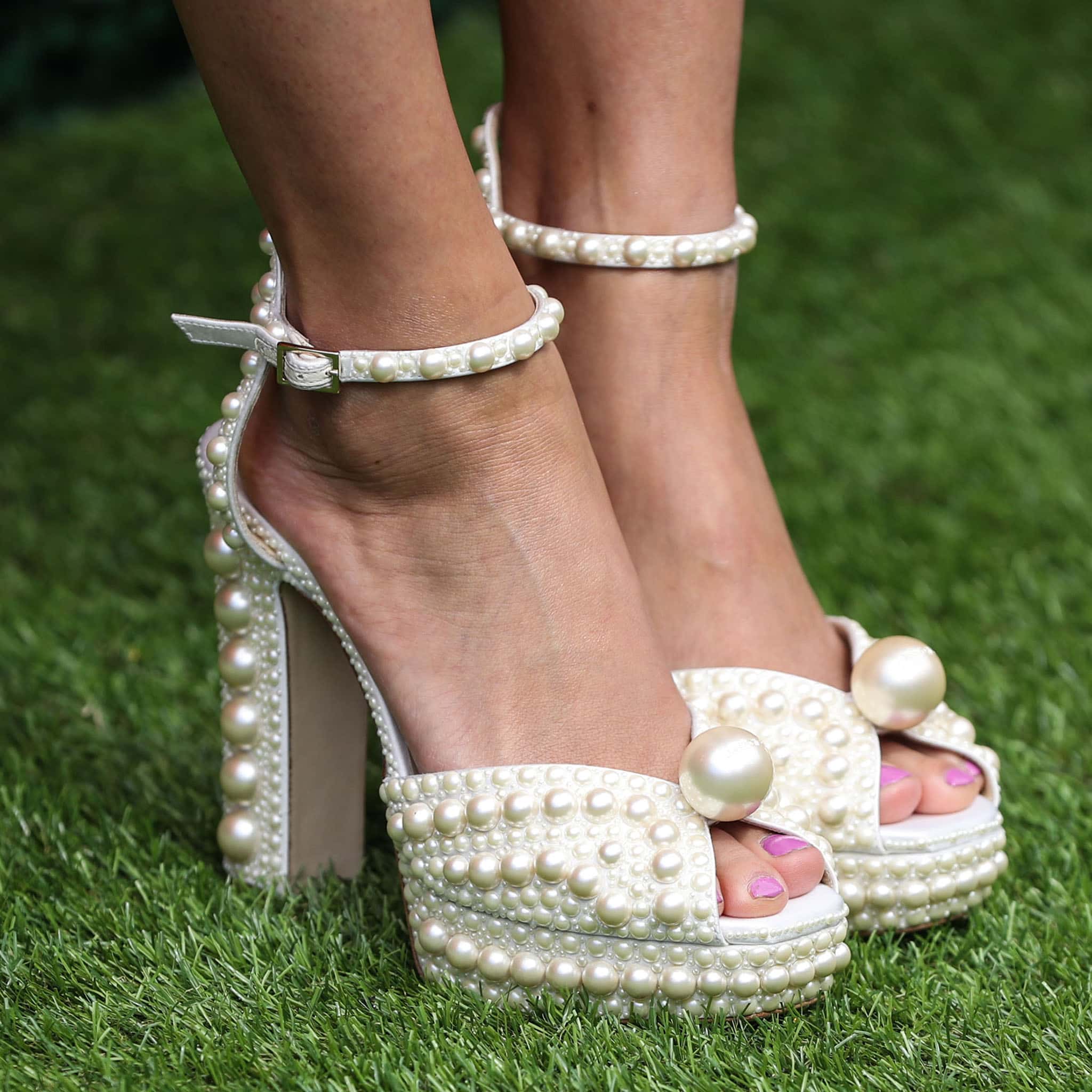 Evoking timeless elegance, these sandals from the popular shoe brand are crafted in Italy from white satin and feature an all-over pearl embellishment. They also have about 1-inch platforms and 4.7-inch high block heels. 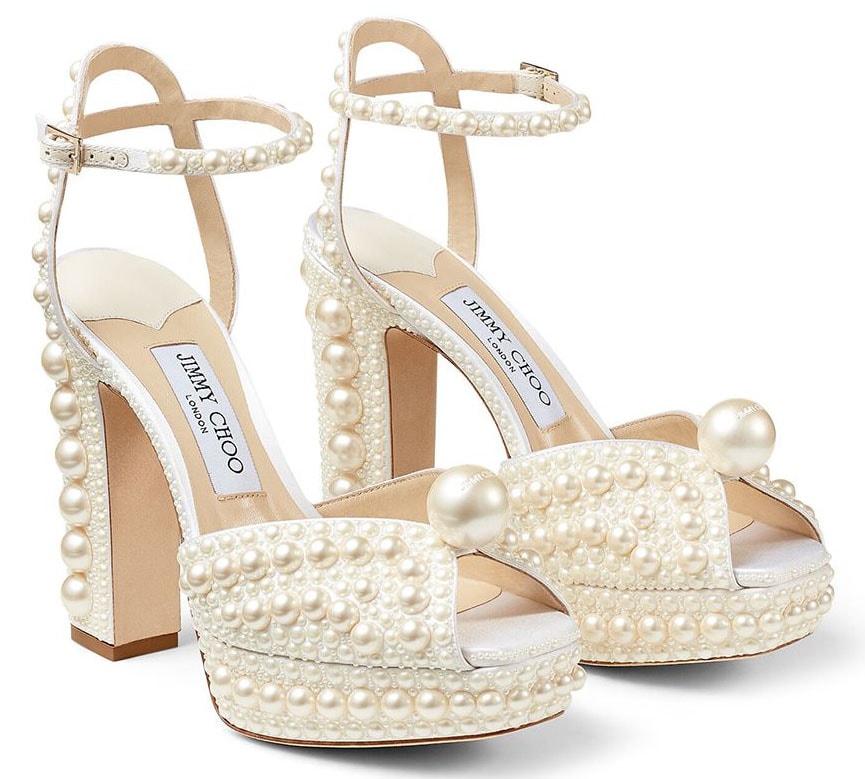