In a cover story for the November issue of GQ, Will Smith reveals details about his untraditional marriage to Jada Pinkett Smith, whom he met on the set of Fresh Prince of Bel-Air.

No believing in monogamy, the wealthy couple have agreed to sleep with other people while married!

“So she grew up in a way that was very different than how I grew up. There were significant endless discussions about, what is relational perfection? What is the perfect way to interact as a couple? And for the large part of our relationship, monogamy was what we chose, not thinking of monogamy as the only relational perfection.”

“The pursuit of truth is the only way to be happy in this lifetime,” he added. “And we sort of came to the agreement that authenticity was the release from the shackles of fame and public scrutiny.” 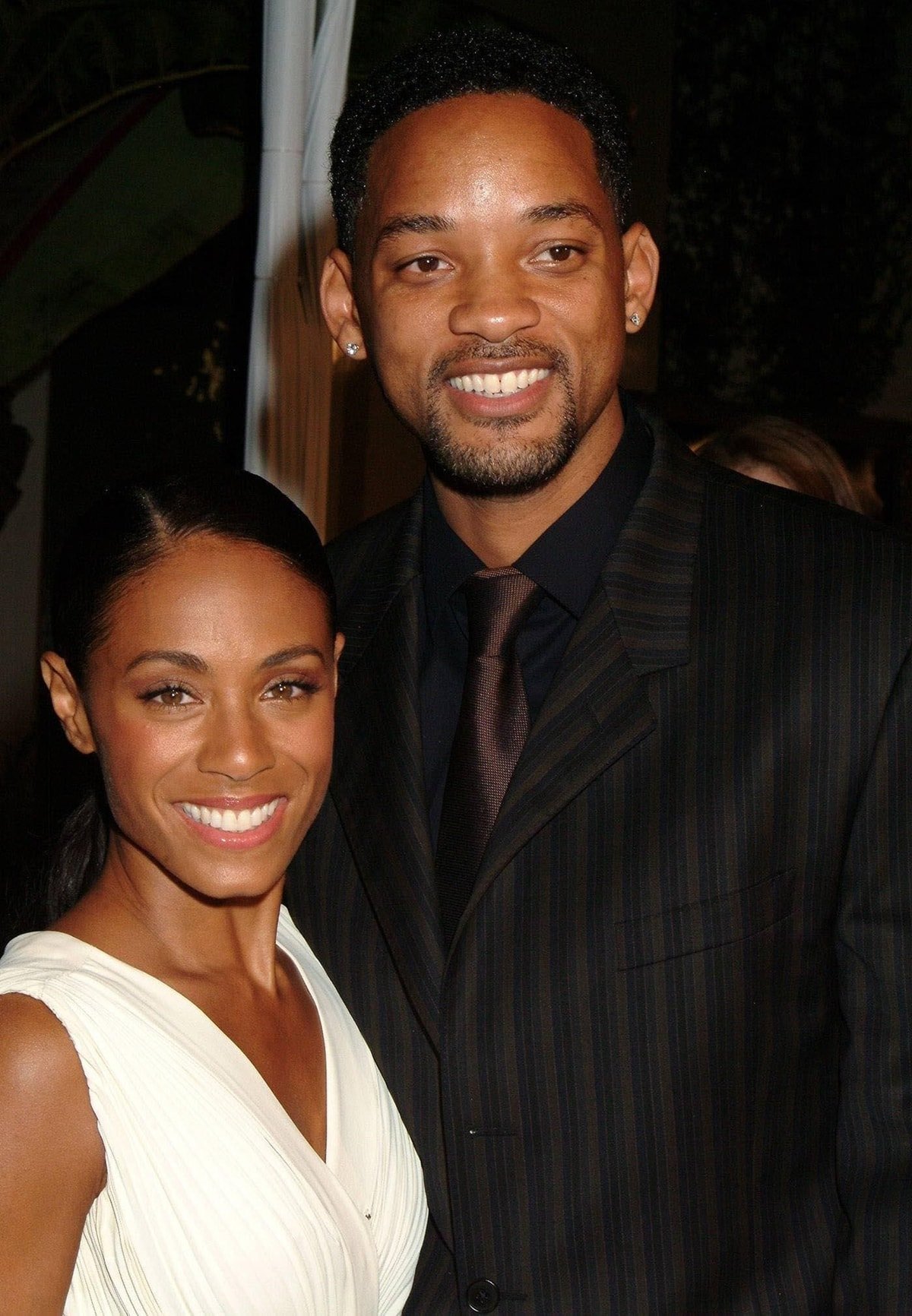 Will Smith met Jada Pinkett Smith on the set of Fresh Prince of Bel-Air in 1990 and married in 1997 (Credit: Jody Cortes / WENN)

“We have given each other trust and freedom, with the belief that everybody has to find their own way,” he said about their flexible arrangement.“

Saying that he’d like a harem of girlfriends, Will Smith said his preferred sexual partners include dancer Misty Copeland and actress Halle Berry. 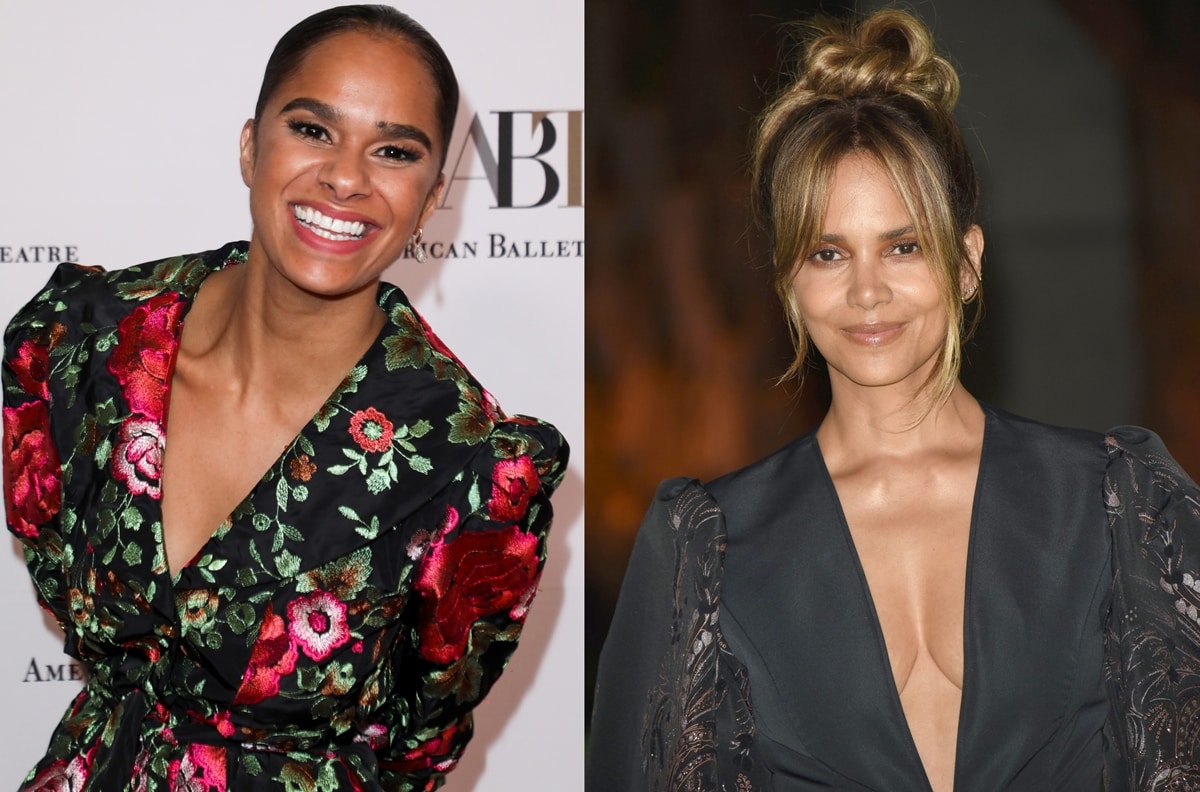 “I don’t know where I saw it or some s**t as a teenager, but the idea of traveling with 20 women that I loved and took care of and all of that, it seemed like a really great idea,” the Hitch actor added about having multiple girlfriends. He has discussed the topic with his intimacy coach Michaela Boehm.

Will Smith also opened up about his wife’s sexual relationship with August Alsina. “The public has a narrative that is impenetrable,” he said. “Once the public decides something, it’s difficult to impossible to dislodge the pictures and ideas and perceptions.” 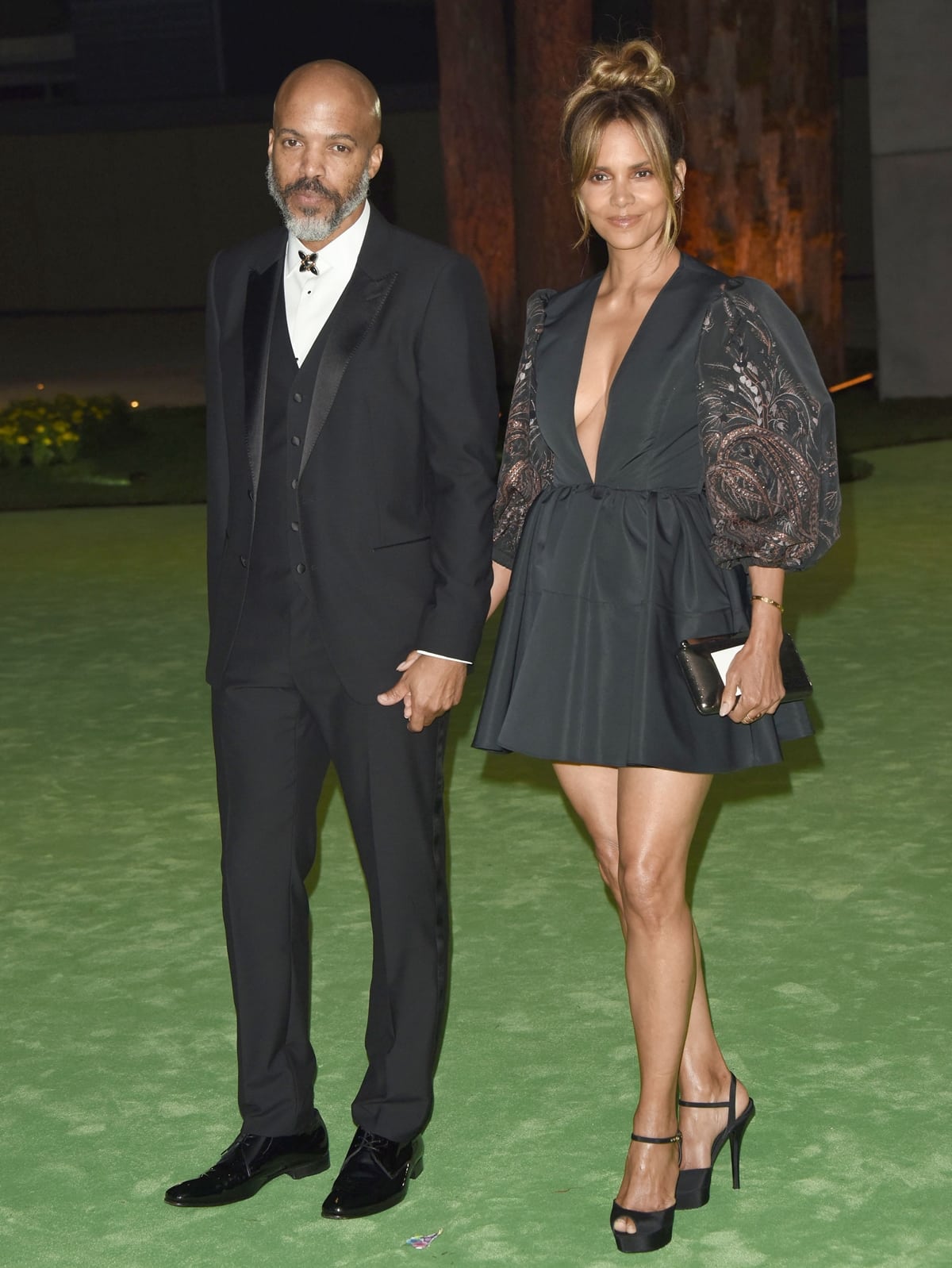 He added about their Facebook Watch series Red Table Talk that aired in July 2020, “a viewer could have walked away thinking that Jada was the only one engaging in other sexual relationships when that was not, in fact, the case.”

“It was midnight and we were going on vacation the next day,” Will said about looking sad in the episode. “It was like, no, no, no, guys, I’m not sad. I’m f*cking exhausted.” 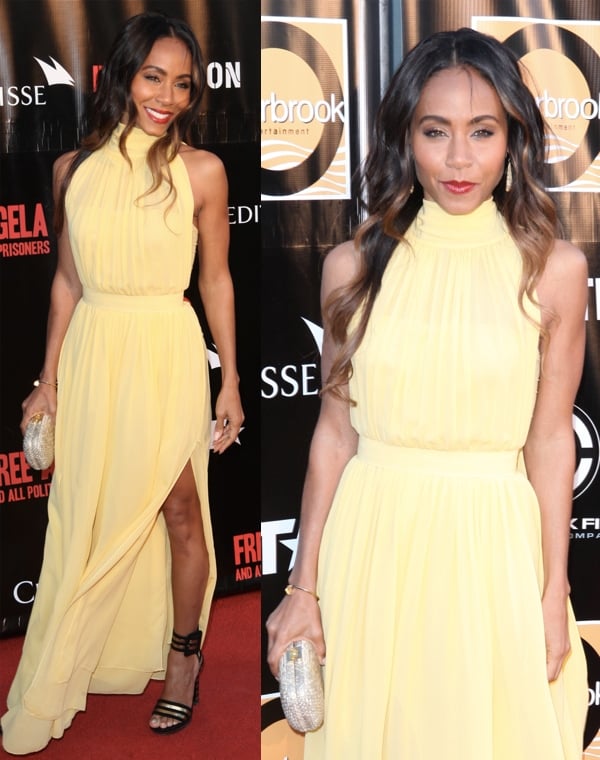 In April 2013, Jada Pinkett-Smith turned heads at the New York premiere of ‘Free Angela and All Political Prisoners’ in a great pair of black suede and gold metallic Saint Laurent heels.

She paired her sandals with a floor-sweeping yellow dress from Miu Miu and loose wavy locks. The American actress, dancer, singer-songwriter, and businesswoman finished the look off with a silver box clutch by Kara Ross, delicate jewelry, and red lips.

Jada Pinkett-Smith in a floor-sweeping yellow dress from Miu Miu at the New York premiere of ‘Free Angela and All Political Prisoners’ held at The Schomburg Center Langston Hughes Auditorium in New York City on April 3, 2013 (Credit: PNP / WENN)

I love her dress and heels, but I wish she would have done something different with her hair. It looked a little droopy and flat in comparison to Jada’s flowing dress and radiant smile. 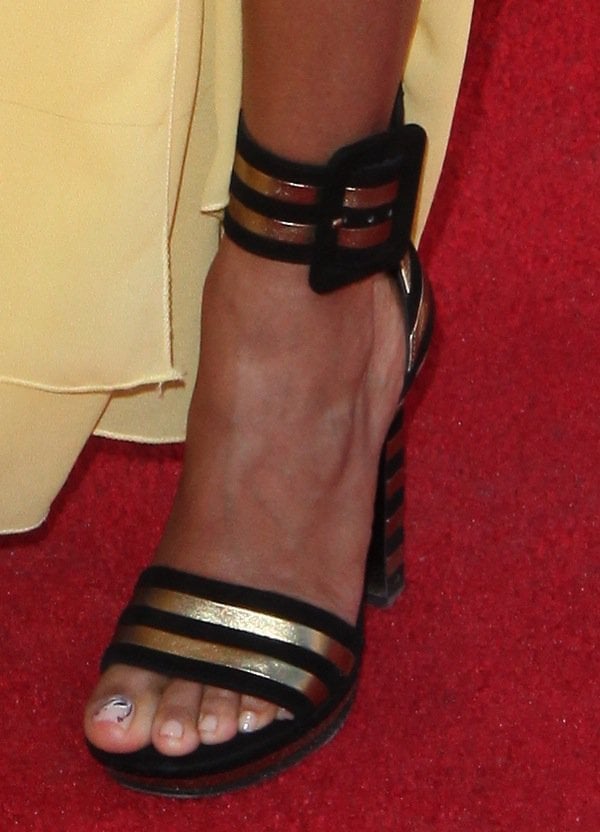 Jada almost always scores in the shoe department, and this time was no different. She looked stunning and sexy with the perfect amount of sophistication and glam.

You can take a closer look at her Saint Laurent heels at Farfetch and Mytheresa. 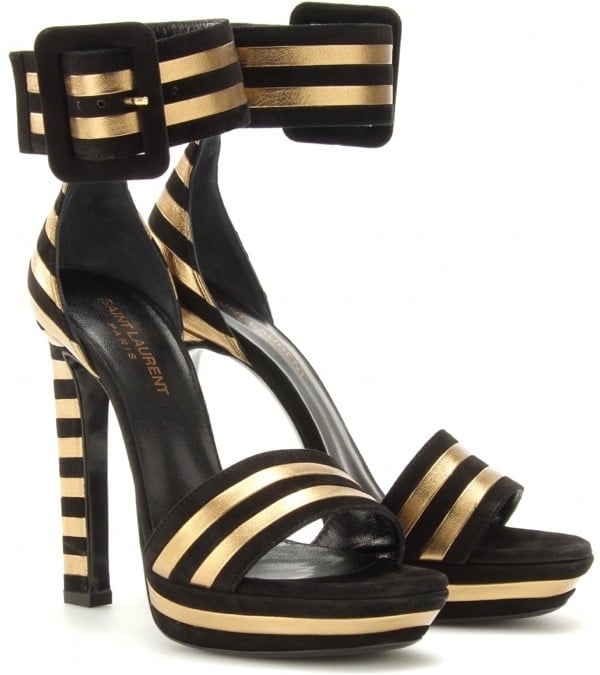 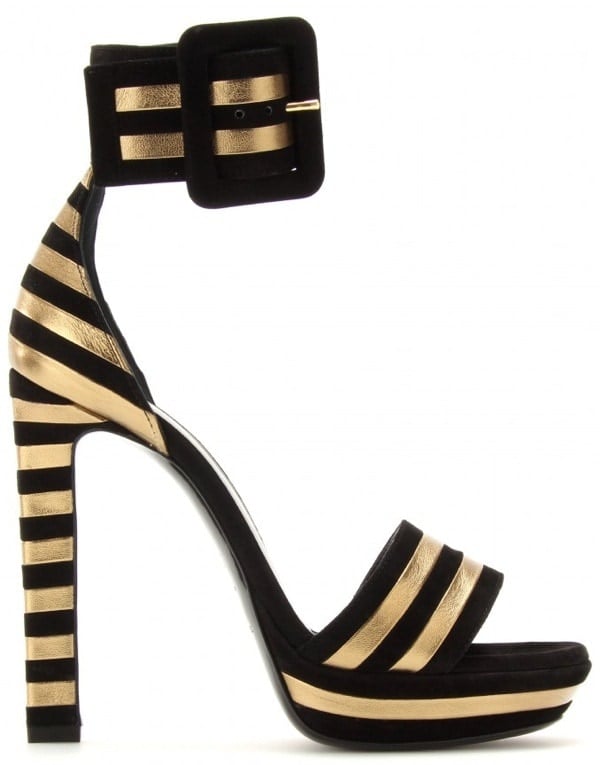 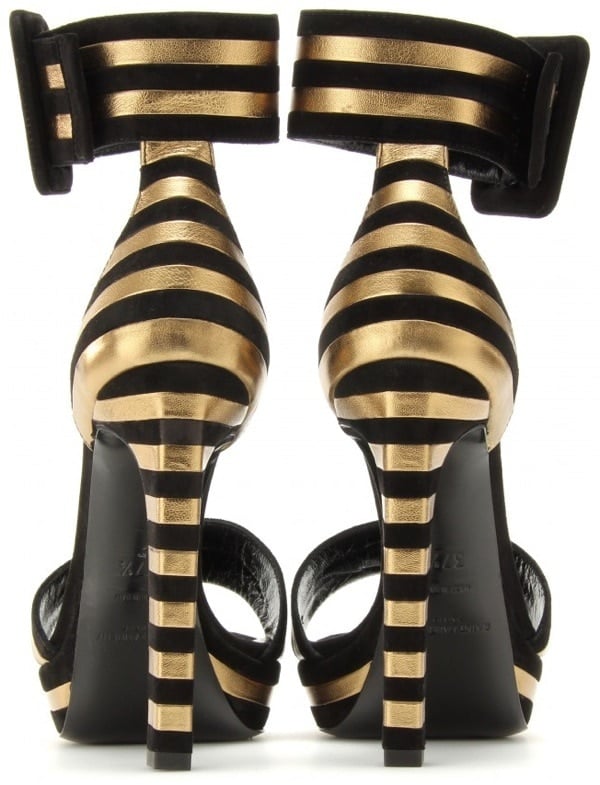 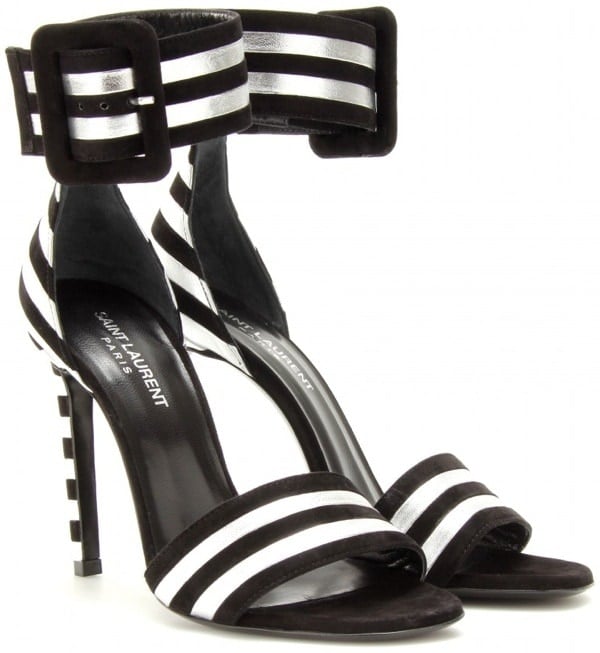 Jada could have opted for simple nude heels or even all-over glittery sandals, but I like her choice.

Her sandals juxtaposed the lightness of her dress just a bit while also adding the perfect dash of metallic glam. What do you think of Jada’s red carpet heels? Would you make them your next shoes?